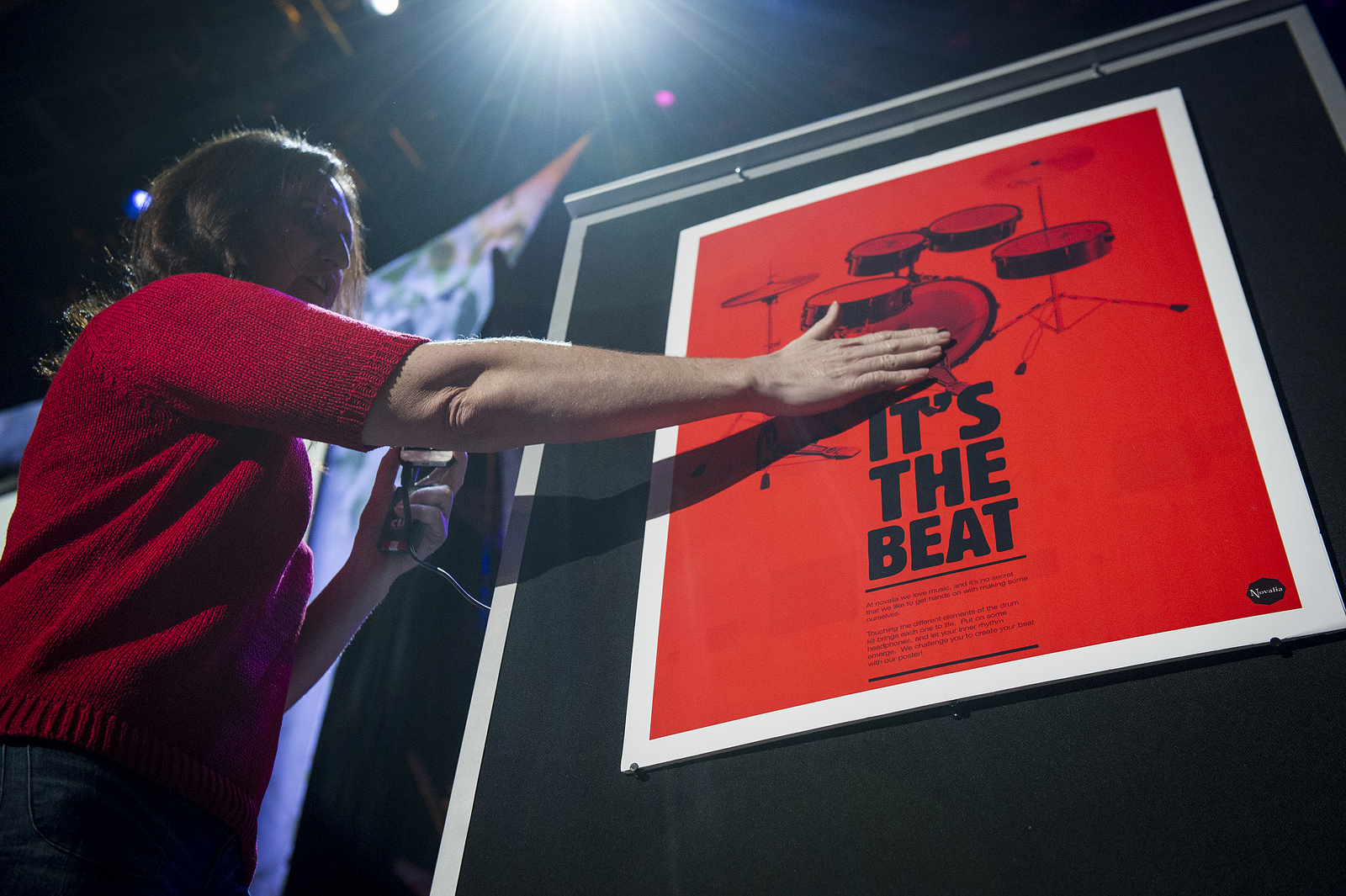 Technologist Kate Stone creates posters that you can play—as in, they actually make music. Here’s the story of how she ended up on the TED stage. Photo: James Duncan Davidson/TED

Kate Stone’s journey to the TED stage began, of all places, in a London bar.

In 2012, TED Curator Chris Anderson and Content Director Kelly Stoetzel embarked on a worldwide talent search, traveling to 14 cities on six continents. In each city, they hosted live events to find amazing speakers, and 34 of them ended up being invited to develop their talks for the TED2013 stage.

After the London event, in April 2012, Stoetzel headed out for drinks with some of the speakers and attendees.

“We were hanging out and talking,” says Stoetzel. “And then Klaudia Oliver, a TEDx organizer and friend, tapped me on the shoulder and said, ‘You have to meet this woman who was an attendee at the event today. Check out what’s in her bag.’”

That’s when Stoetzel met Kate Stone, founder of the British technology and printing firm Novalia. Stone pulled out some posters from her bag and began playing them as musical instruments. She creates electronic circuits that can be printed on paper, allowing her to play music with her fingers or a controller.

Stone remembers it well: “When I was unrolling my posters, stuff was falling out of my bag and scattering all over the floor. I get too excited about what I do,” she says. “I was showing Kelly my stuff, in this bar that was all a bit posh and serious and refined. I remember playing some beats. I almost got us kicked out.”

Stone describes herself as the one who is always last to leave a party, because she never picks up on the signals about when it’s time to go home. It was thanks to her late-night presence that Stoetzel got to see her work. “I was totally fascinated,” says Stoetzel. “Kate told me more about her work and I asked, ‘Why didn’t you apply for the TED@London event? How about if you come speak at TED@Amsterdam?” It was the very last worldwide talent search event.

Stone did. She had a couple of months to prepare her talk, and delivered it to big applause at TED@Amsterdam in August, and Stoetzel and the TED content team invited her to give a longer version of the talk onstage at TED2013.

Kate Stone: DJ decks made of ... paper To prepare for her longer talk, Stone took an outline approach. She thought about the main points that she wanted to cover, and decided to improvise everything in between. She wanted to sound off-the-cuff and not too rehearsed. It made for a suspenseful moment or two as the demos kicked into gear — but when they did, her joy was infectious.

Stone says that her talk has significantly boosted her professional life. “It’s the best business card ever to have spoken at TED,” says Stone. “I get feedback and emails quite often from people who have seen it and want to work with me and my team at Novalia.”

Maybe the most exciting part for Stone: A collaboration with the legendary DJ QBert on his latest double album, Extraterrestria. The upcoming album (on vinyl, of course) will ship in a cardboard gatefold sleeve covered in printed circuits from Novalia, turning the entire sleeve into a scratchable turntable setup that connects to a DJ app via Bluetooth, so every fan can remix the album.

More than a year after Stone’s talk at TED2013, she continues to hear from artists, scientists and companies across the globe who want to collaborate. But her proudest moment on the TED stage relates neither to her talk nor to the unique way in which she was discovered.

“I’m massively proud of being the first transgender person to speak at TED, without bringing that up in my talk,” Stone says. “Other transgender people do a great job of talking about the transgender community, which is of course extremely necessary and good for the world. But I also believe that it’s important to just get on stage and talk about what we do without primarily defining ourselves as transgender. I want to be a good role model in that way.”