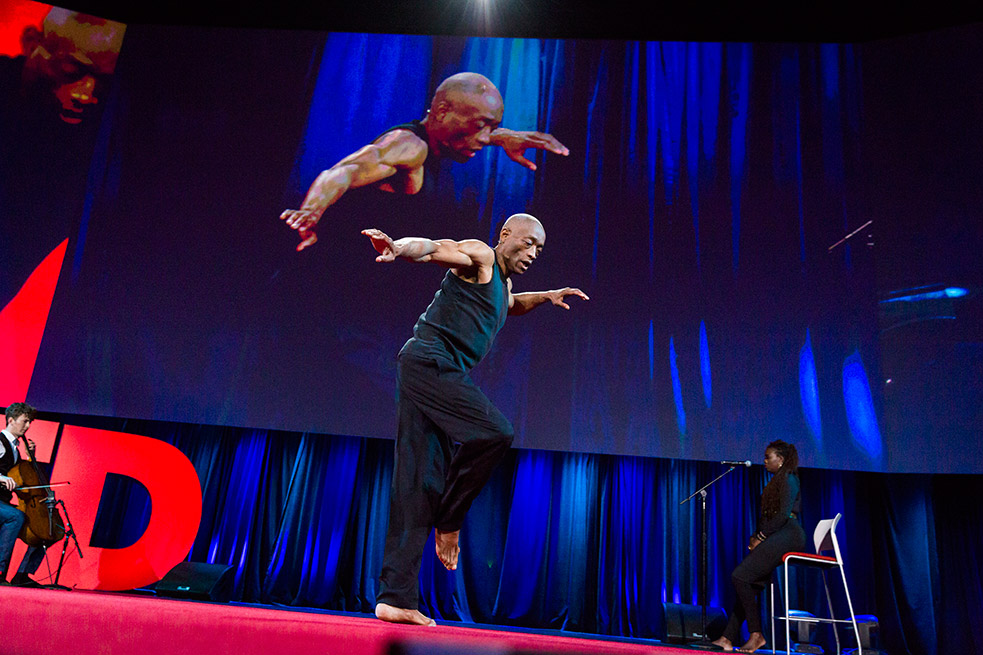 Red and blue came together in this structured improvisation from legendary dancer Bill T. Jones, cellist Joshua Roman and vocalist Somi. The title: “The Red Circle and the Blue Curtain.” The red circle is the TED carpet. The blue curtain refers to Isadora Duncan’s favorite backdrop for her own dance improvisations a century ago. Photo: Bret Hartman/TED

No, this is not a math problem. It was the scenario presented to choreographer Bill T. Jones, cellist Joshua Roman and vocalist Somi at the start of the TED2015 conference. June Cohen, TED’s executive producer of media, offered a challenge to these three: Could they craft a structured improvisation to perform … on Wednesday?

Cohen was curating a session that day called Creative Ignition. “The session already highlighted a wide range of creative thinkers and doers, but I wanted to find a way to illuminate the creative process by showing instead of telling,” she says. “I was hoping this piece would spark the audience to think about the ways in which structured improvisation and cross-disciplinary collaboration could advance their own work.”

The three artists, who had never performed together (indeed, Jones and Roman had never met), had about two days to create the structure for the piece, from conception to presentation.

On Tuesday morning, Roman and Somi — both TED Fellows — headed off to what they expected to be a rehearsal room in the Vancouver Convention Center. It turned out to be a storage closet. “I walked in and there were guys placing orders for equipment supplies,” says Roman. But the workers were quick to welcome the unexpected arrivals, and helped them set up a workspace. “We moved the tables and boxes to make room for Bill to move,” says Roman.

No mirrors, no windows. Only an upright piano remained in the middle of the room. Jones brought his partner, Bjorn Amelan, with him. Amelan provided the only outside feedback that Jones, Roman and Somi would get before performing in front of the 1,300-person TED audience and seven cameras.

This privacy was important to their process. “We allowed ourselves to go into some pretty fun and funky places as a way of getting to know each other; as a way of exploring the boundaries and the limits of what it is we were about to do,” Roman remembers. “We let ourselves become very vulnerable with each other.”

So where do three artists, who have never worked together before and have a TED Talk to create, begin?

They started by marking out the stage. Roman and Somi sat on the far sides of the space, facing in to frame the area where Jones would dance. Jones suggested opening with classical roots, so they decided that Roman would perform a Bach prelude. Somi learned the melody to the vocal companion, the Gounod “Ave Maria.”

The group put those first few bars on a repeating loop. Then Jones asked Roman and Somi to shift the music back and forth and create a sonic relationship. “We sort of passed sound between us,” Somi remembers. “After a several minutes, it felt almost meditative. It inspired deep connection between all of us.”

The piece evolved from there. “Improv is a wonderful way to get to know people. You see so much about their musical and organizational ability,” says Roman.

This improvisational spirit led Bill T. Jones to a muse. “I chose Isadora Duncan for this TED intervention because she is for me a sort of ‘ur-presence’ espousing the creed of spontaneity — the notion that creativity comes from a deep interior region,” the choreographer says. 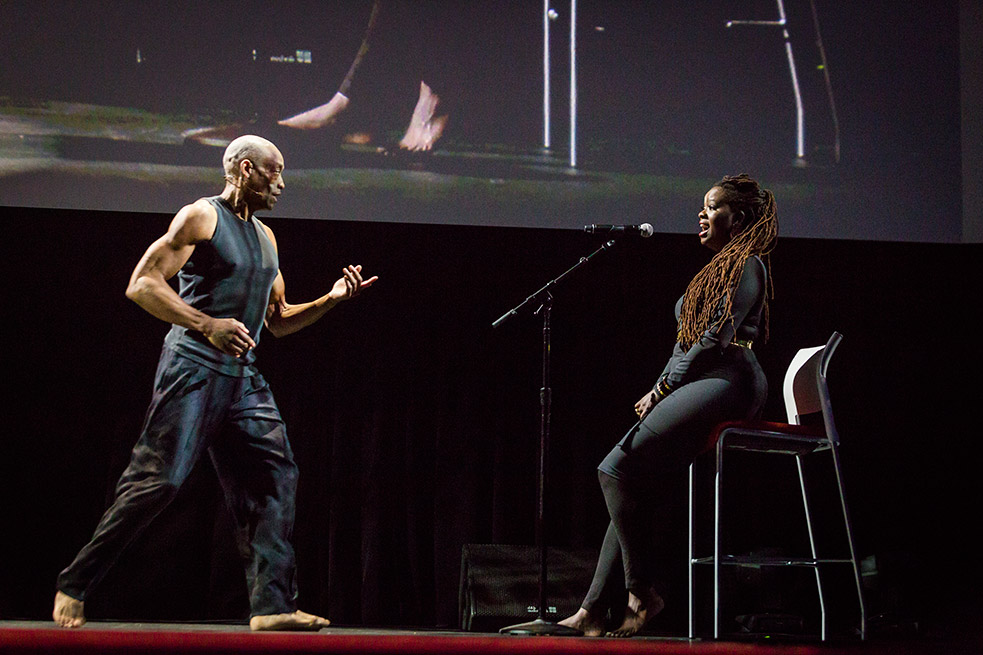 Bill T. Jones coaxes vocalist Somi during their performance at TED2015. The group created a language to give the piece both structure and spontaneity. Photo: Bret Hartman

Duncan famously danced in front of a blue curtain — which Jones thought would match the TED red circle. This pairing of shapes and colors informed the performance. Roman says, “As this process unfolded, we developed a language structure … We decided that one of the most basic and easily communicable things was Bill’s position in relation to Somi and myself.”

Jones framed the performance as a circle, laid out between Somi and Roman — where the red carpet would be on the stage. This circle formed the road map for the improvisation. “Certain points in that circle represented where we might introduce some kind of change, without dictating beforehand what type of change it would be,” says Roman.

The next day in the TED theater, Jones, Roman and Somi put their experiment into practice. Jones set the scene for the audience as “a morning in Vancouver in 2015.” Reiterating the signals the three developed, he sprang from the front of the stage to Roman at the cello, receded back to the blue curtain and turned his open palms to prompt Somi’s haunting scat singing.

Their language structure explains the mesmerizing synchronicity that Jones, Roman and Somi found onstage. Each performers’ electric attention was palpable as they took the lead. Jones coaxed and coached Roman and Somi, egging them on: “Are we there yet? I don’t think so.”

In the TED video, released this week, it looks as if Jones is unlocking something as he dances. That’s not far from the experience that the two TED Fellows describe. “Bill has this beautiful way of getting us out of our individual selves and into the collective shared energy,” Somi says. 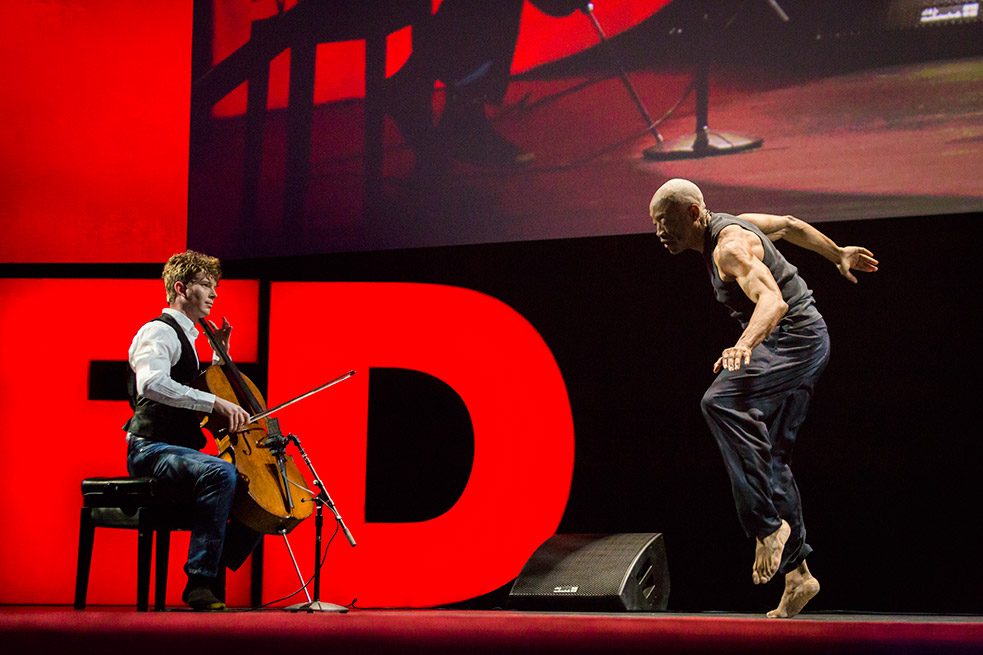 Joshua Roman played a Bach prelude for this performance. It’s “a style that Bach would have improvised,” he says. Photo: Bret Hartman

“He’s one of those artists who provokes in a very thoughtful and meaningful way. He’s not bound by the traditional boxes, but definitely supported by them,” says Roman. “He’s not about leaving the past behind — he’s about exploring it.”

Surprisingly, Jones doesn’t plan to watch the video. “Though I relish the notion that many will be able to see this, I don’t want to disturb the memory of that experience,” he says. “I trust the public will get a whiff of what transpired between the three of us.”

Cohen, who commissioned the collaboration, was thrilled with the final result. “What we got was far beyond what we could have hoped for. This performance was different for me than anything else that happened at TED,” she says. “Most of what happens on the TED stage is curation. This was more like alchemy.” 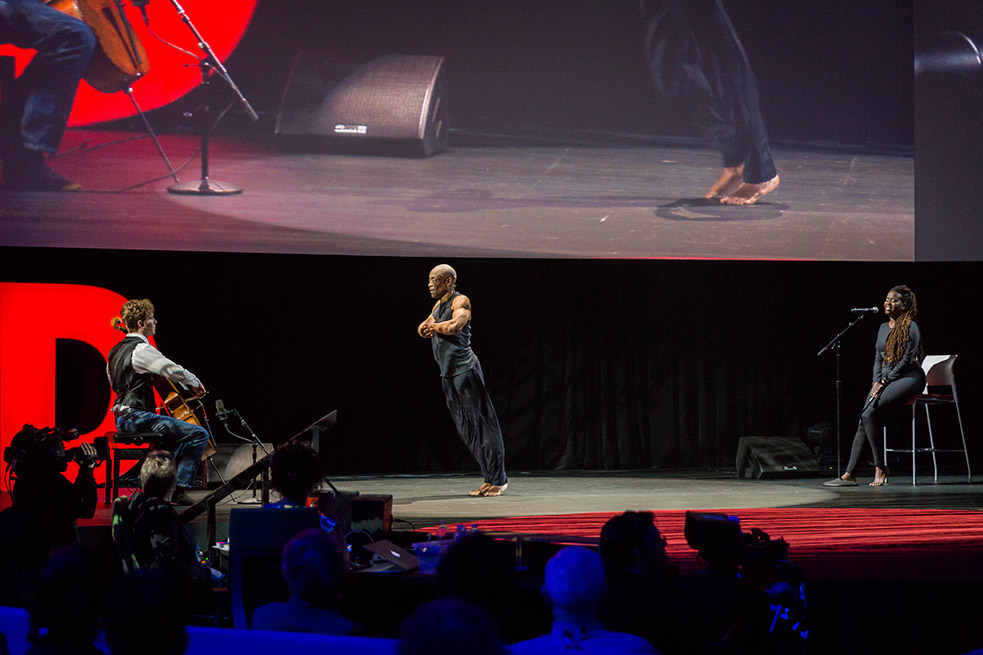 This performance was alchemy in action, showing the creative process as it catalyzed in the moment. Photo: Bret Hartman