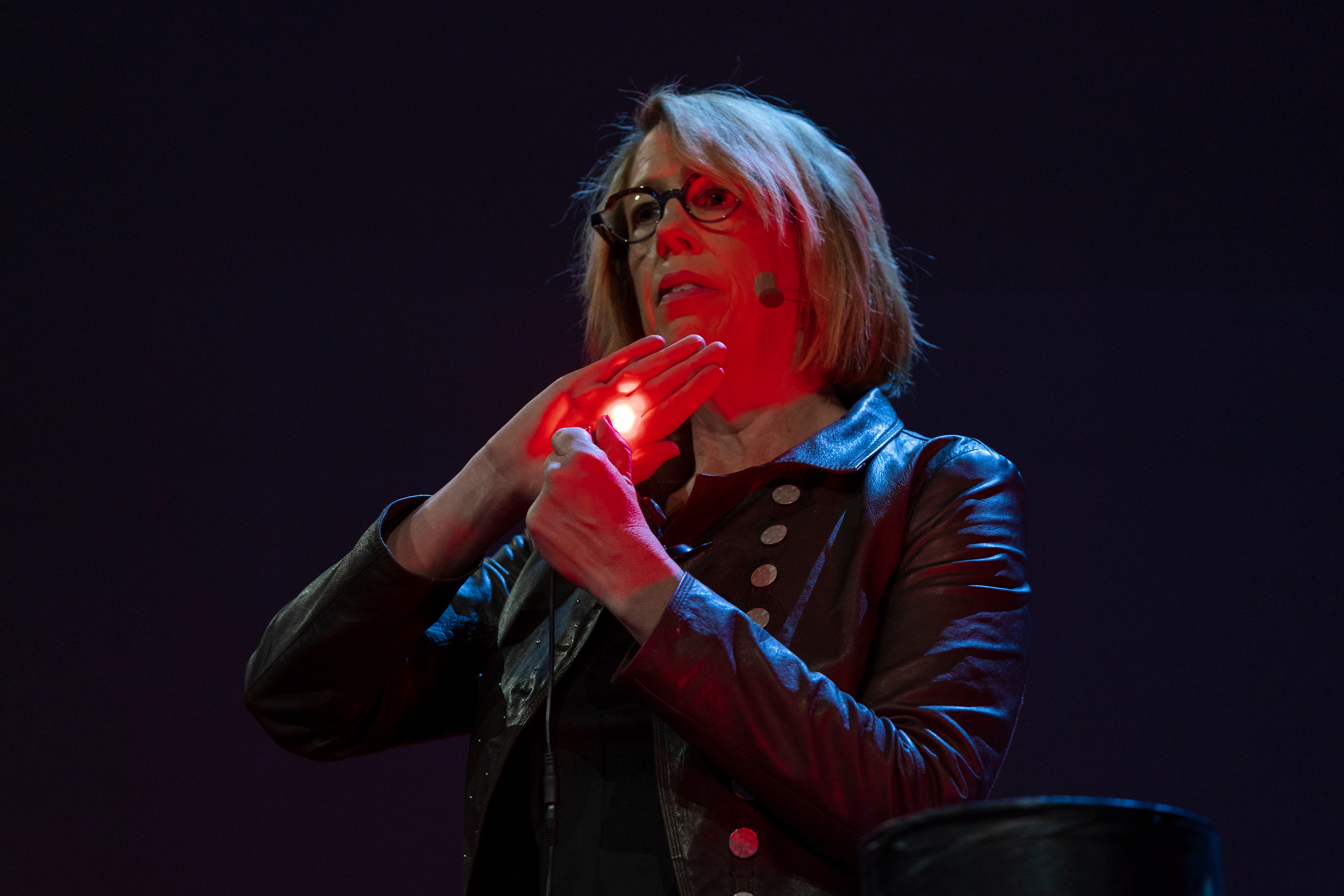 Mary Lou Jepsen demonstrates the ability of red light to scatter when it hits our bodies. Can we leverage this property to see inside ourselves? She speaks at TED2018 on April 13, 2018. Photo: Ryan Lash / TED

During the week of TED, it’s tempting to feel like a brain in a jar — to think on a highly abstracted, intellectual, hypertechnical level about every single human issue. But the speakers in this session remind us that we’re still just made of meat. And that our carbon-based life forms aren’t problems to be transcended but, if you will, platforms. Let’s build on them, explore them, and above all feel at home in them.

When red light means go. The last time Mary Lou Jepsen took the TED stage, she shared the science of knowing what’s inside another person’s mind. This time, the celebrated optical engineer shares an exciting new tool for reading what’s inside our bodies. It exploits the properties of red light, which behaves differently in different body materials. Our bones and flesh scatter red light (as she demonstrates on a piece of raw chicken breast), while our red blood absorbs it. By measuring how light scatters, or doesn’t, inside our bodies, and using a technique called holography to study the resulting patterns as the light comes through the other side, Jepsen believe we can gain a new way to spot tumors and other anomalies, and eventually to create a smaller, more efficient replacement for the bulky MRI. Her demo doubles as a crash course in optics, with red and green lasers and all kinds of cool gear (some of which juuuuust squeaked through customs in time). And it’s a wildly inspiring look at a bold effort to solve an old problem in a new way. 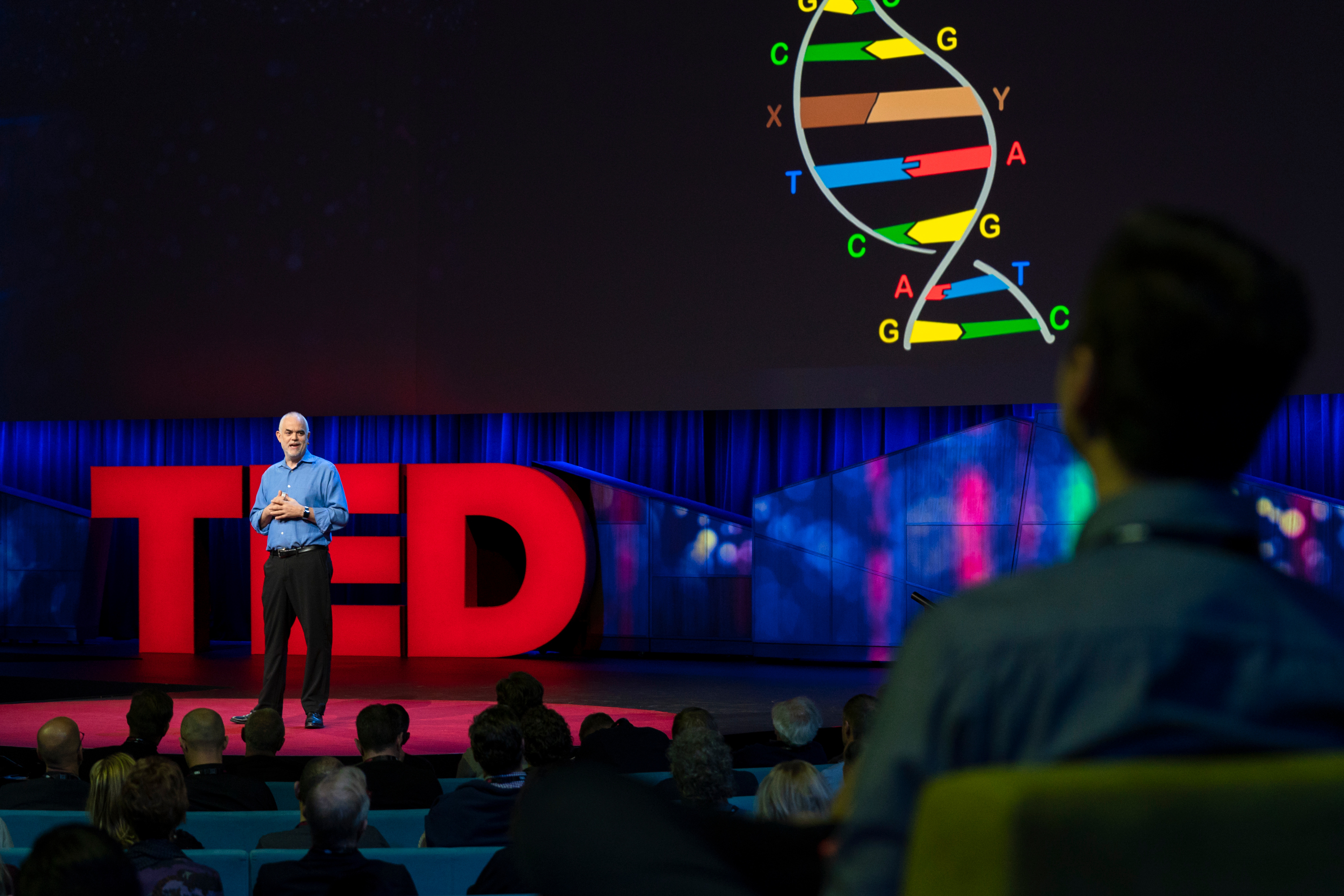 Floyd E. Romesberg imagines a couple new letters in DNA that might allow us to create … who knows what. Photo: Jason Redmond / TED

What if DNA had more letters to work with? DNA is built on only four letters: G, C, A, T. These letters determine the sequences of the 20 amino acids in our cells that build the proteins that make life possible. But what if that “alphabet” got bigger? Synthetic biologist and chemist Floyd Romesberg suggests that the letters of the genetic alphabet are not all that unique. For the problem of life, perhaps, “maybe we’re not the only solution, maybe not even the best solution — just a solution.” And maybe new parts can be built to work alongside the natural parts. Inspired by these insights, Romesberg and his colleagues constructed the first “semi-synthetic” life forms based on a 6-letter DNA. With these extra building blocks, cells can construct hitherto unseen proteins. Someday, we could tailor these cells to fulfill all sorts of functions — building new, hyper-targeted medicines, seeking out and destroying cancer, or “eating” toxic materials. Worried about unintended consequences? Romesberg says that his augmented 6-letter DNA cannot be replenished within the body. As the unnatural genetic materials are depleted, the semi-synthetic cells die off, protecting us against nightmarish sci-fi scenarios of rogue microorganisms. 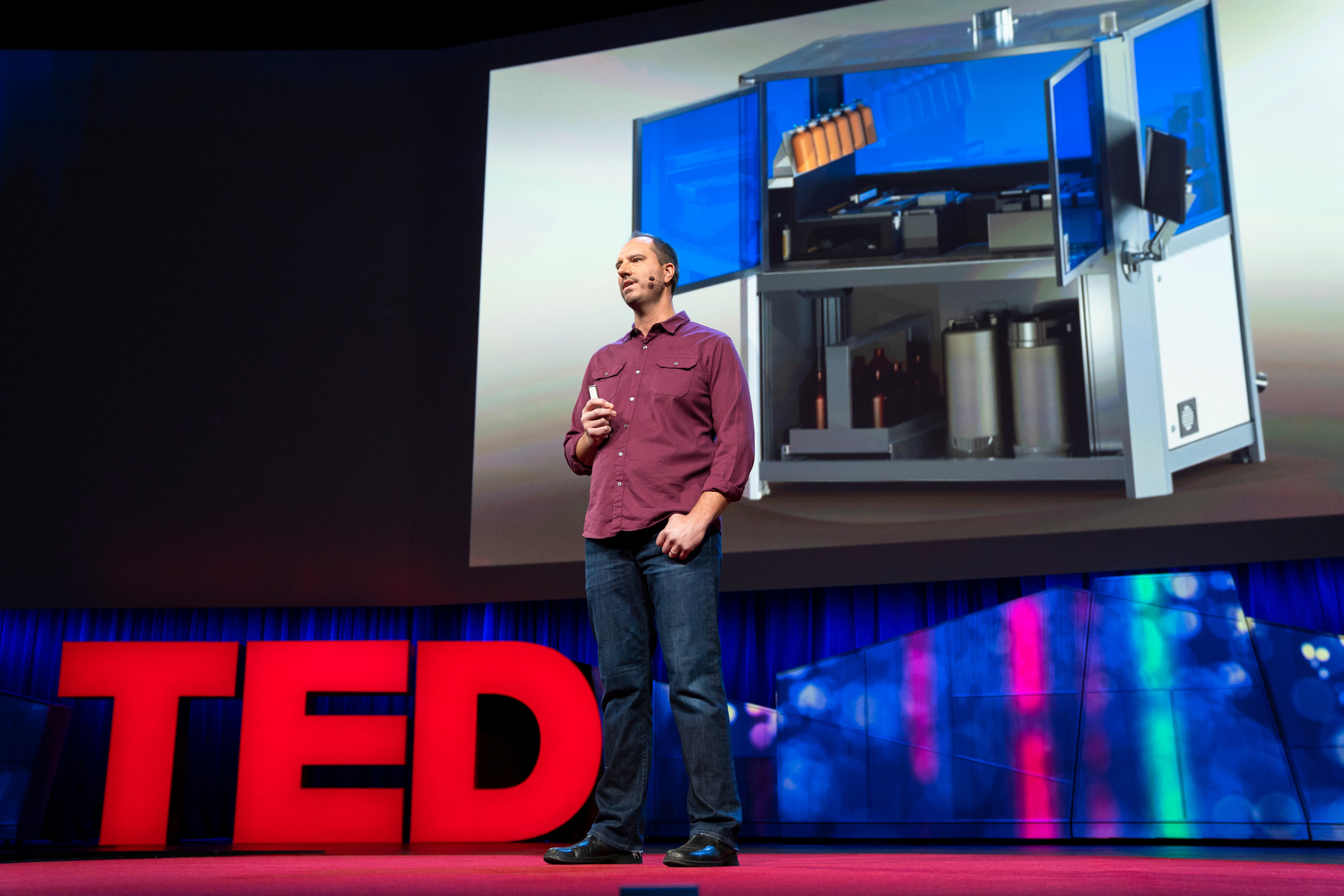 On the slide behind Dan Gibson: a teleportation machine, more or less. It’s a “printer” that can convert digital information into biological material, and it holds the promise of sending things like vaccines and medicines over the internet. Photo: Ryan Lash / TED

Beam our DNA up, Scotty. Teleportation is real. That’s right, you read it here first. This method isn’t quite like what the minds behind Star Trek brought to life, but the massive implications attached are just as futuristic. Biologist and engineer Dan Gibson reports from the front lines of science fact, that we are now able to transmit not our entire selves, but the most fundamental parts of who we are: our DNA. Or, simply put, biological teleportation. “The characteristics and functions of all biological entities including viruses and living cells are written into the code of DNA,” says Gibson. “They can be reconstructed in a distant location if we can read and write the sequence of that DNA code.” The machines that perform this fantastic feat, the BioXP and the DBC, stitch together both long and short forms of genetic code that can be downloaded from the internet. That means that in the future, with an at-home version of these machines (or even one literally worlds away, say like, Mars), we may be able to download and print personalized therapeutic medications, prescriptions and even vaccines. The process takes weeks now, but could someday come down to 1–2 days. (And don’t worry: Gibson, his team and the government screen every synthesis order against a database to make sure viruses and pathogens aren’t being made.) He says: “For now, I will be satisfied beaming new medicines across the globe, fully automated and on-demand to save lives from emerging deadly infectious diseases and to create personalized cancer medicines for those who don’t have time to wait.” 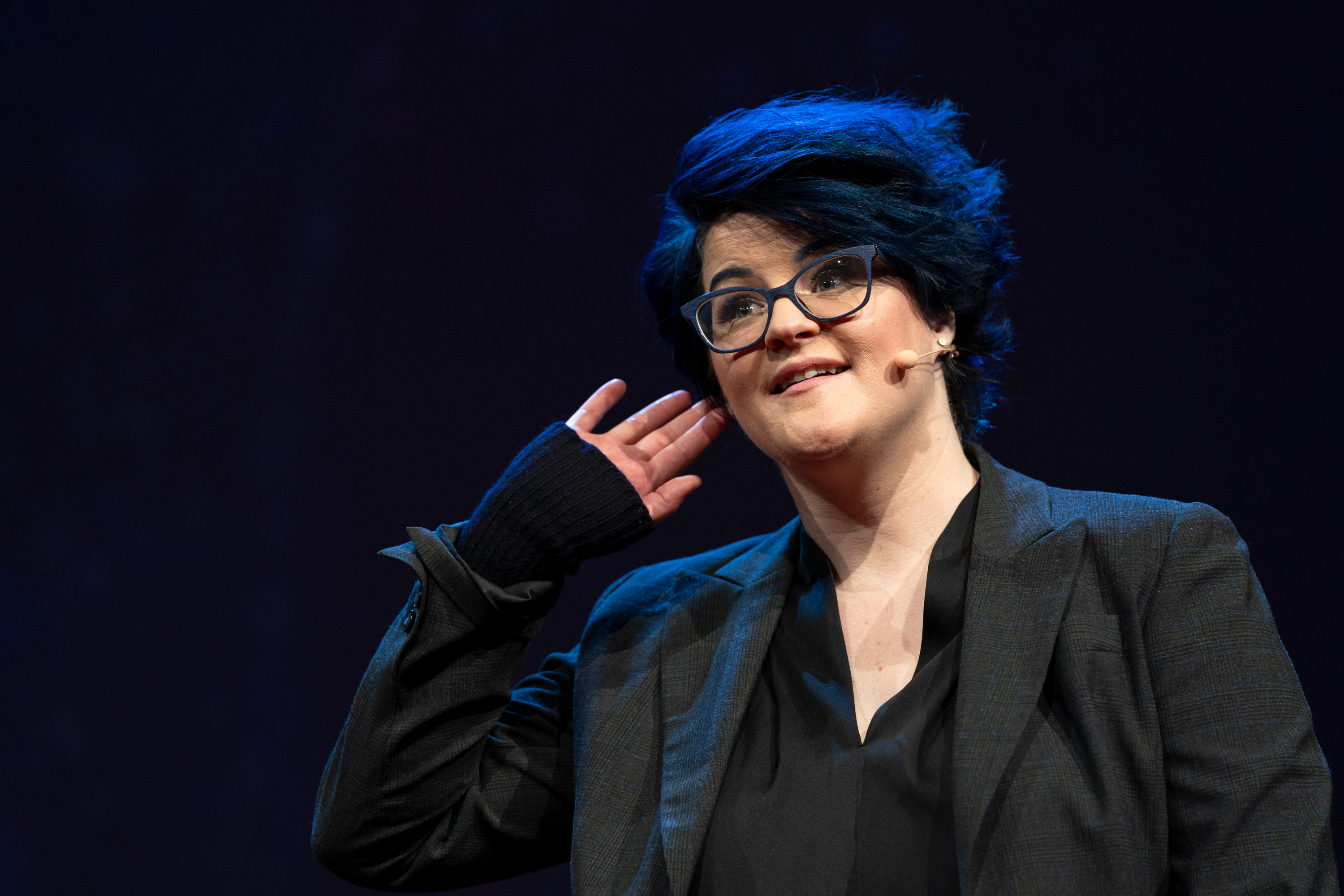 In a powerful talk, sex educator Emily Nagoski educates us about emotional nonconcordance — when our body and our mind “say” different things in an intimate situation. Which to listen to? Photo: Ryan Lash / TED

Busting one of our most dangerous myths about sex. When it comes to pleasure, humans have something that’s often called “the reward center” — but, explains sex educator Emily Nagoski, that “reward center” is actually three intertwined, separate systems: liking, or whether it feels good or bad; wanting, which motivates us to move toward or away from a stimulus; and learning. Learning is best explained by Pavlov’s dogs, whom he trained to salivate when he rang a bell. Were the dogs hungry for the bell (wanting)? Did they find the bell delicious (liking)? Of course not: “What Pavlov did was make the bell food-related.” The separateness of these three things, wanting, liking and learning, helps explain a phenomenon called emotional nonconcordance, when our physiological response doesn’t match our subjective experience. This happens with all sorts of emotional and motivational systems, including sex. “Research over the last thirty years has found that genital blood flow can increase in response to sex-related stimuli, even if those sex-related stimuli are not also associated with a subjective experience of wanting and liking,” she says. The problem is that we don’t recognize nonconcordance when it comes to sex: in fact, there is a dangerous myth that even if someone says they don’t want it or don’t like it, their body can say differently, and the body is the one telling the “truth.” This myth has serious consequences for victims of unwanted and nonconsensual sexual contact, who are sometimes told that their nonconcordant genital response invalidates their experience … and who can even have that response held up as evidence in sexual assault cases. Nagoski urges all of us to share this crucial information with someone — judges, lawyers, your partners, your kids. “The roots of this myth are deep and they are entangled with some very dark forces in our culture, but with every brave conversation we have, we make the world that little bit better,” she says to one of the biggest standing Os in a standing-O-heavy session. 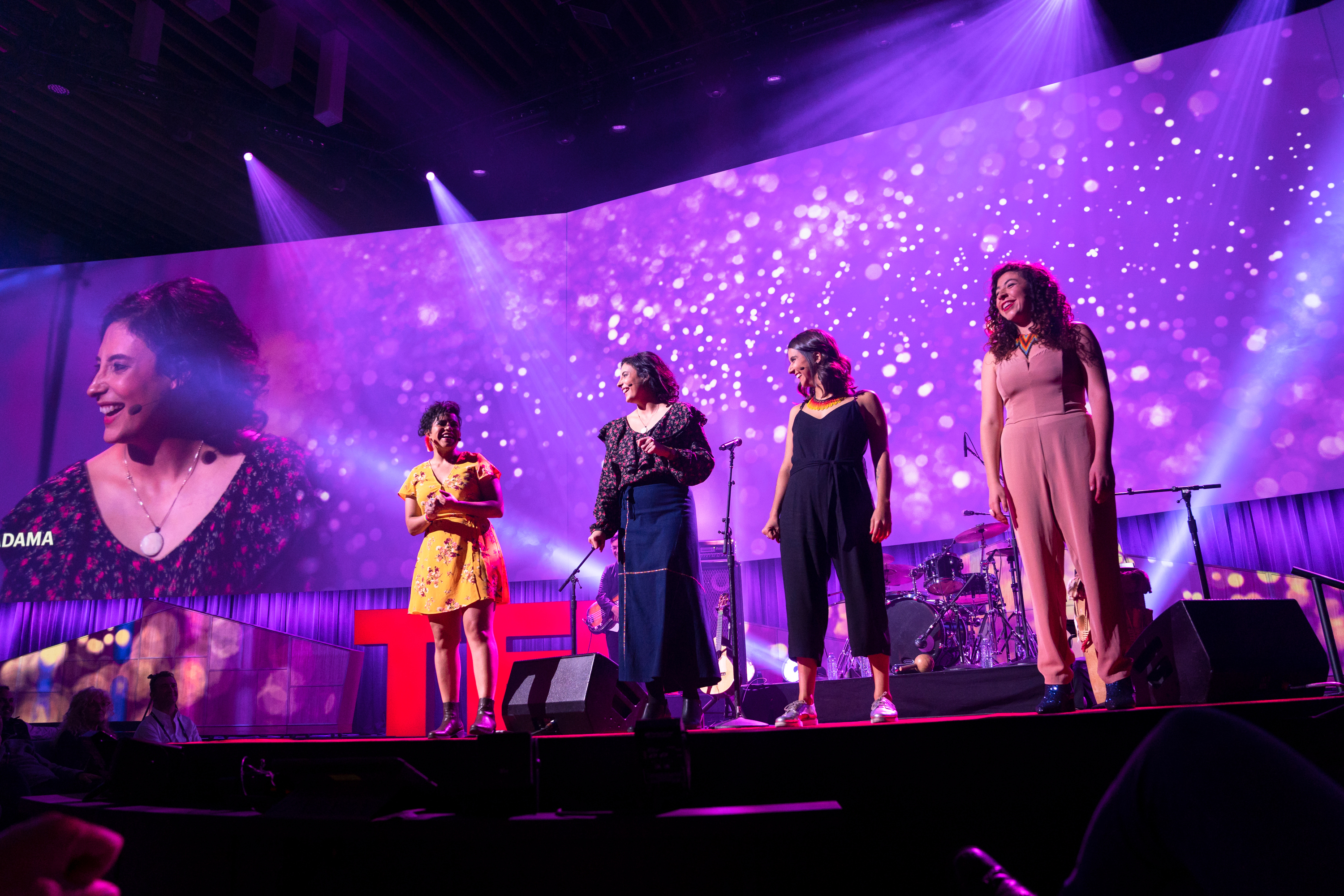 The musicians and songwriters of LADAMA perform and speak at TED2018. Photo: Ryan Lash / TED

Bringing Latin alternative music to Vancouver. Singing in Spanish, Portuguese and English, LADAMA enliven the TED stage with a vibrant, energizing and utterly danceable musical set. The multinational ensemble of women — Maria Fernanda Gonzalez from Venezuela, Lara Klaus from Brazil, Daniela Serna of Colombia, and Sara Lucas from the US — and their bass player collaborator combine traditional South American and Caribbean styles like cumbia, maracatu and joropo with pop, soul and R&B to deliver a pulsing musical experience. The group took attendees on a musical journey with their modern and soulful compositions, playing original songs “Night Traveler” and “Porro Maracatu.” 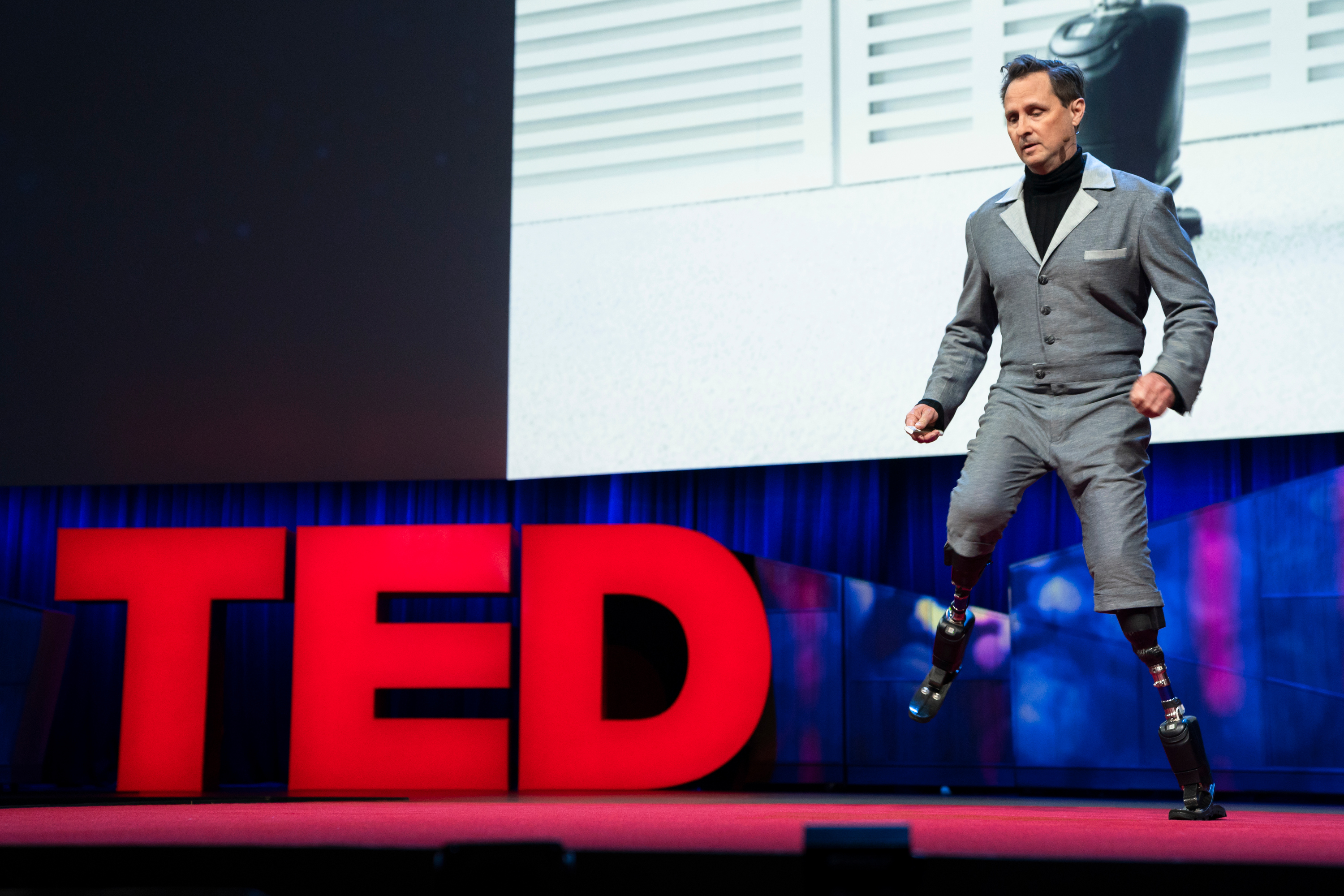 Hugh Herr lost both legs below the knee, but the new legs he built allow him once again to run, climb and even dance. Photo: Ryan Lash / TED

“The robot became part of me.” MIT professor Hugh Herr takes the TED stage, his sleek bionic legs conspicuous under his sharp grey suit. “I’m basically nuts and bolts from the knee down,” Herr says, demonstrating how his bionic legs — made up of 24 sensors, 6 microprocessors and muscle-tendon-like actuators — allow him to walk, skip and run. Herr builds body parts, and he’s working toward realizing a goal that has long been thought of as science fiction: for synthetic limbs to be integrated into the human nervous system. He calls it “NeuroEmbodied Design,” a methodology to create cyborg function where the lines between the natural and synthetic world are blurred. This future will provide humanity with new bodies and end disability, Herr says — and it’s already happening. He introduces us to Jim Ewing, a friend of Herr’s who was in a climbing accident that resulted in the amputation of his foot. Using the Agonist-antagonist Myoneural Interface, a method Herr and his team developed at MIT to connect nerves to a prosthetic, Jim’s bones and muscles were integrated with a synthetic limb, re-establishing the neural connection between his ankle and foot muscles and his brain. “Jim moves and behaves as if the synthetic limb is part of him,” Herr says. And he’s even back climbing again. Taking a few moments to dream, Herr describes a future where humans have augmented their bodies in a way that fundamentally redefines human potential, giving us unimaginable physical strength — and, maybe, the ability to fly. “I believe humans will become superheroes,” Herr says. “During the twilight years of this century, I believe humans will be unrecognizable in morphology and dynamics from what we are today. Humanity will take flight and soar.” 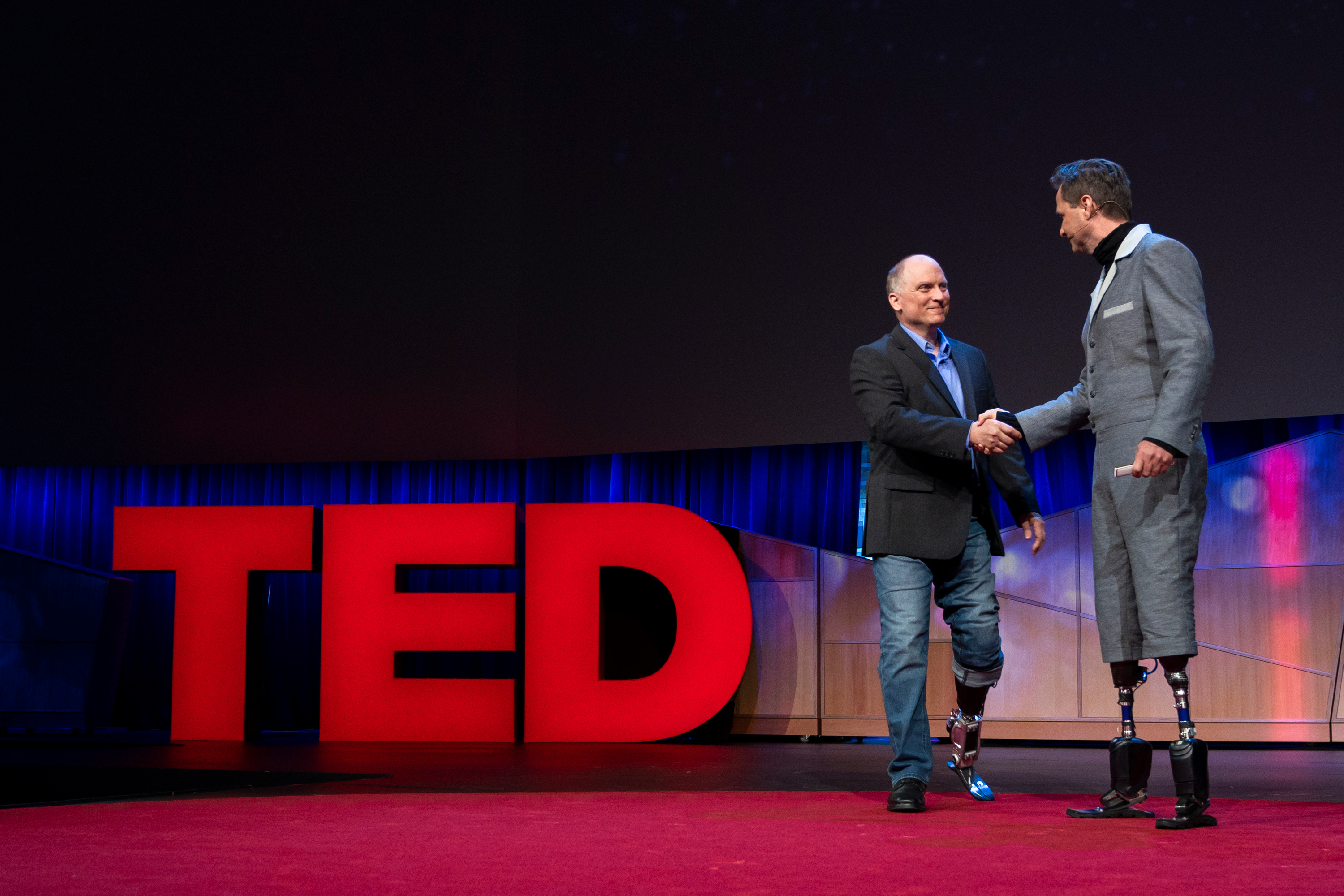 Jim Ewing, left, lost a limb in a climbing accident; he partnered with MIT professor Hugh Herr, right, to build a limb that got him back up and climbing again. Photo: Ryan Lash / TED