We’re more connected than ever before but, in some parts of the world, life has never been more difficult. From refugee camps full of people displaced by war to urban blight in the developed world, our problems are growing more complex. But in that strife lies opportunity.

In the seventh session of TED2017, hosted by TED’s Curation Director Kelly Stoetzel and International Curator Bruno Giussani, seven speakers and one multi-instrumentalist took us on a trip to America’s only school for refugee kids, an urban farm changing the landscape in Detroit, a cohousing complex in Oakland and more.

Below, recaps of the talks from Session 7, in chronological order.

Musical multiplicity, from a single mind. Jacob Collier is a one-man band / a cappella group. In his popular YouTube videos (watch his take on Stevie Wonder’s “Don’t You Worry ‘Bout a Thing“) and debut album, he sings every part — and plays every instrument. He’s won two Grammys as a result. On the TED stage, Collier has re-created the “magical room” at his home in London where he plays. He’s so comfortable here that he performs in his socks. As he sings harmonic parts, multiple versions of his face appear on screen, singing with him as he floats toward the moon. In a second song, he jumps frenetically from guitar to piano to drums to upright bass and back again, a tree growing out of water behind him, its limbs blowing in the breeze before exploding in a kaleidoscope of movement. Everything visual takes its cues from something auditory, he explains after the performance. It’s created in real time, always new, reacting to what he plays with his impressive range.

The modern refugee crisis is manageable, not insoluble. David Miliband gives us specific ways to make a difference in the modern refugee crisis: if you run a business, employ refugees; if you believe refugees deserve help, use your voice and take on the myths that hold back policy; if you have money, give it to charities that help refugees; if you’re a citizen, put people in power who will put the policy solutions into practice. “This is about the rescue of us and our values as well as the rescue of them and their lives,” he says. Read a full recap of his talk here.

Sharing the stories of refugees. As the founder and head of the Fugees Academy in Clarkston, Georgia, the first accredited private school in America for refugees, Luma Mufleh is a fierce advocate for people who have fled war and persecution in their native countries. Why? “I am an Arab, I am an immigrant, I am a Muslim and I am gay,” she says. “And I am the daughter of a refugee.” Her grandparents left Syria in 1964 during the first Assad regime and restarted their lives in Jordan, where Mufleh grew up. After college, she applied for political asylum in America (since she is gay, she risked imprisonment in some countries) and received it. She found friends and work, yet struggled to find a real home — a place where she felt like she fit in. But she found that home when she made a wrong turn into an apartment complex and saw kids playing soccer. She watched them for an hour, smiling because they reminded her of playing soccer with her cousins when she was young. She approached the boys, learned they were refugees, and asked if she could join them. “This group of kids would give me a crash course in refugees, poverty and humanity,” Mufleh says. She became their soccer coach, and eventually she helped start a school for refugee children. Every day, her students’ hope, resilience, determination, a love of life and appreciation for being able to rebuild their lives impresses her, especially in the face of rising anti-immigrant sentiment. Right now, only a tiny number of refugees — about 0.1 percent — is accepted for resettlement. “We have seen advances in every aspect of our lives, except in our humanity,” she declares. Let’s make very effort to embrace refugees, just as she has. And when we do, we’ll see exactly how much they have to offer all of us. 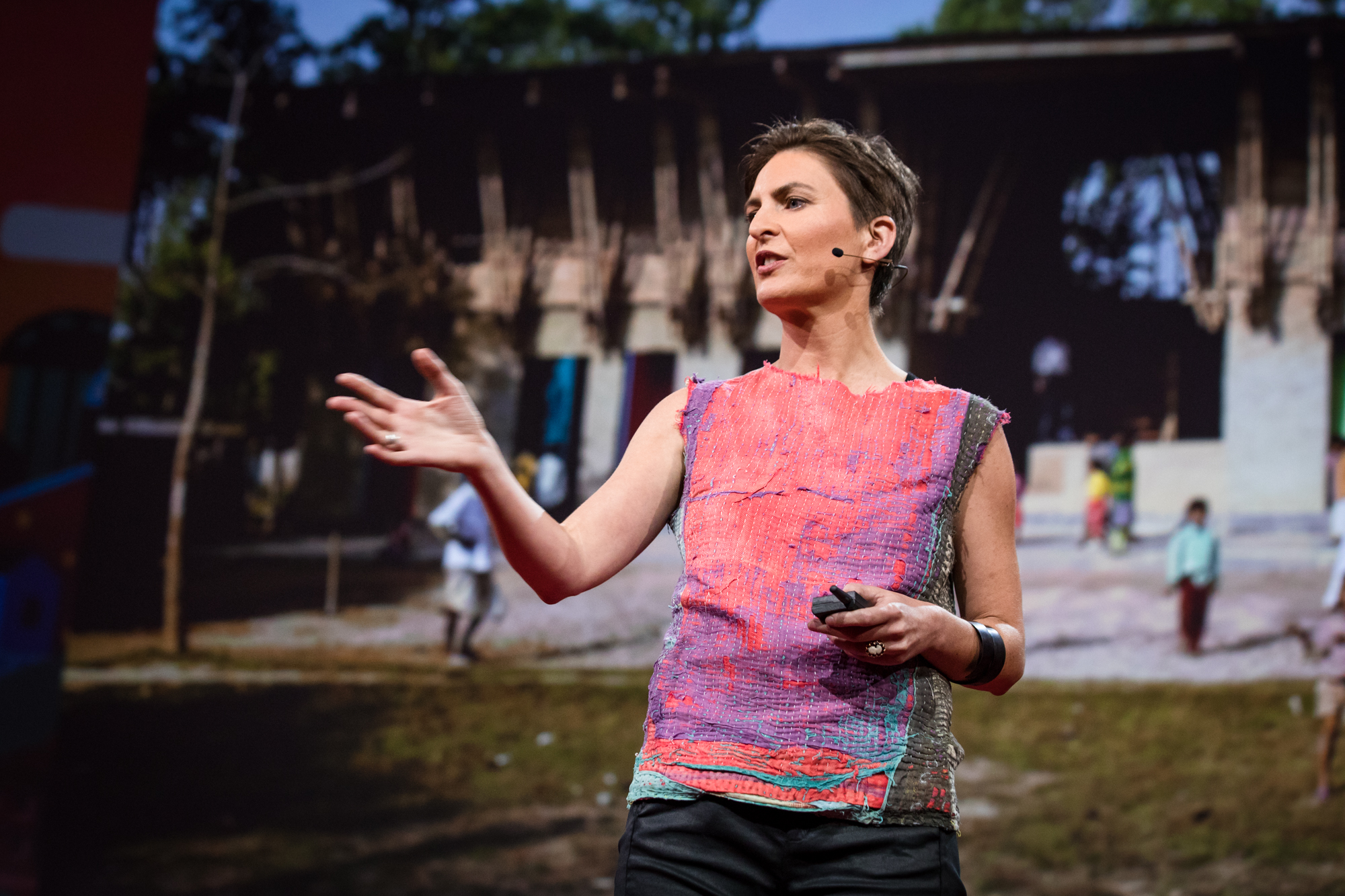 All around us and just below our feet. Architect Anna Heringer works with mud. A lot. Her personal dream is to one day build a mud skyscraper right in the middle of New York City. “When we think of mud, we think of dirt, and this is the image I want to change,” she says. Around the world, some 3 billion people live in earthen homes — they’ve been doing so for centuries — and Heringer is passionate about increasing that number with her low-tech, high-quality buildings. She’s molded awe-inspiring schools, cozy offices and social spaces from China to Switzerland, Bangladesh and beyond with her beloved mud, bamboo and other naturally sourced materials. “It doesn’t matter how old a material it is, it matters how we use it today,” she says. 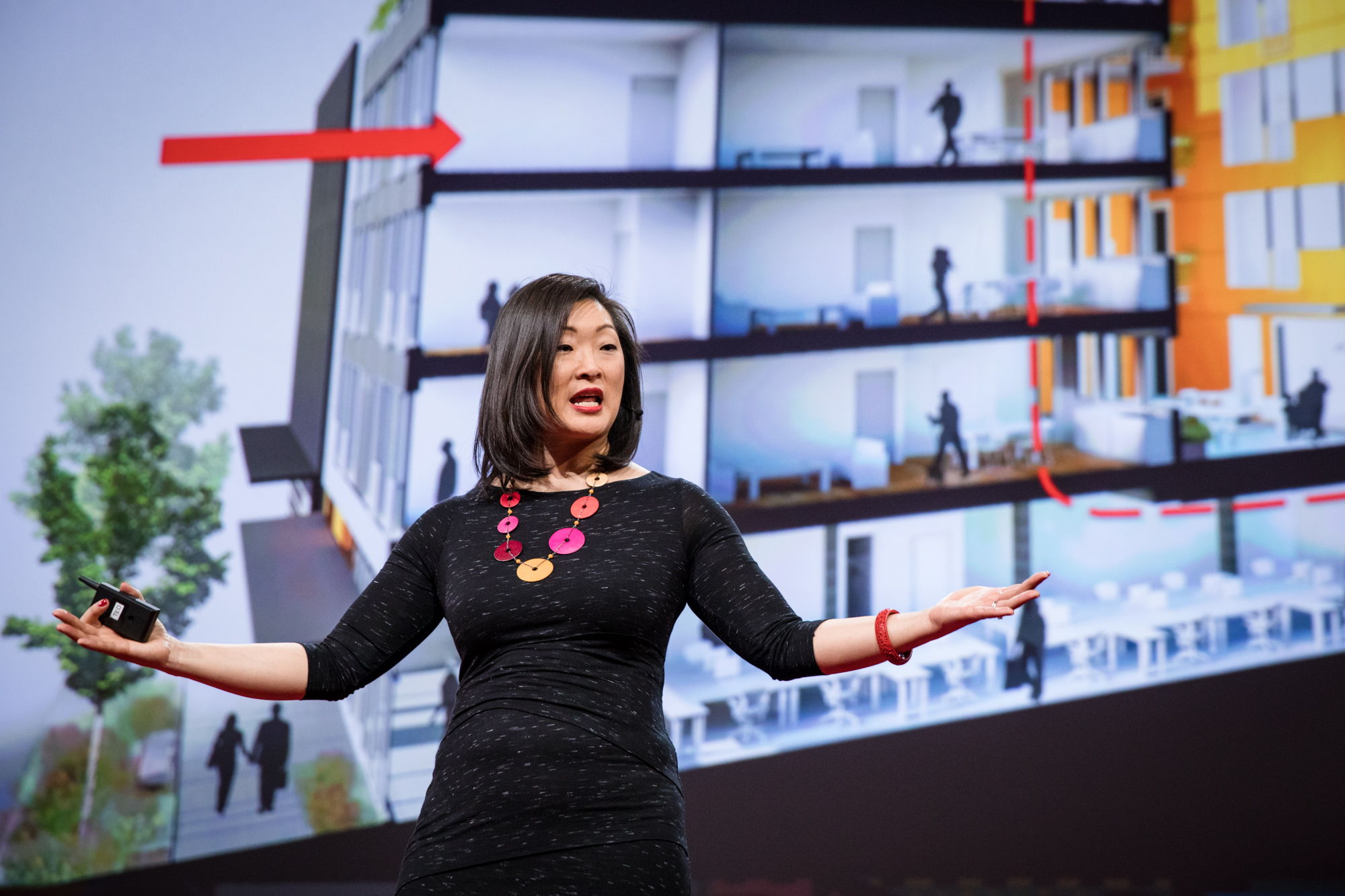 Grace Kim imagines a future of cohousing as an antidote to social isolation. She speaks at TED2017, April 26, 2017, Vancouver, BC, Canada. Photo: Bret Hartman / TED

An antidote to isolation. We will all experience loneliness at some point in our lives, but it doesn’t stem from being alone. It comes from a lack of connection. “Loneliness can be the result of our built environments, the very homes we choose to live in,” says architect Grace Kim. She notes that many of us live in homes where we don’t really know our neighbors, which can contribute to a sense of isolation. An increasing number of people are choosing to live instead in cohousing spaces, where they still have their own home but share indoor and outdoor spaces with neighbors. “It’s not a new concept; it’s an age-old way of living,” says Kim. And in a time when loneliness has been called a public health epidemic, with isolated individuals facing a higher risk of death, the stakes couldn’t be higher. “Cohousing can save your life,” she says.

What will the cities of tomorrow look like? With more than half of the world population living in cities, one thing is undeniable: we are an urban species. Finnish game designer Karoliina Korppoo allows us to creatively rethink the cities of tomorrow as the lead designer of the sensational city-building game, Cities: Skylines. Players can share their creations online through saved games and videos, allowing us to peer into the ways in which people and urban planners imagine future cityscapes — they can be dreamed up or resemble existing cities. Will cities be built on a grid or naturally follow the landscape? Will cities be more walkable? “How we will shape our cities might shape our fate as a species,” warns Korppoo.

Weapons of math destruction. What happens when an equation meant to be objective turns out to have an agenda? Cathy O’Neil reminds us that, in actuality, “algorithms are opinions embedded in code” and need to be regulated. Too often, we’re asked to accept complicated algorithms that run our world, with the explanation “it’s not like we would understand the math anyway.” That’s exactly what Kiri Soares, a Brooklyn principal, was told in 2011 when she questioned the implementation of an unreliable new metric for teacher success — even though that algorithm was expected to guide her decisions to fire underperforming teachers. This opaqueness is what O’Neil refers to as “marketing through intimidation.” To combat biased algorithms, she calls for data integrity checks, refined definitions of success, considering who an algorithm fails and investigating long-term feedback loops. O’Neil urges us to be wary of algorithms and who is producing them. “This is not a math test; this is a political fight,” she says. “The era of blind faith in big data must end.” 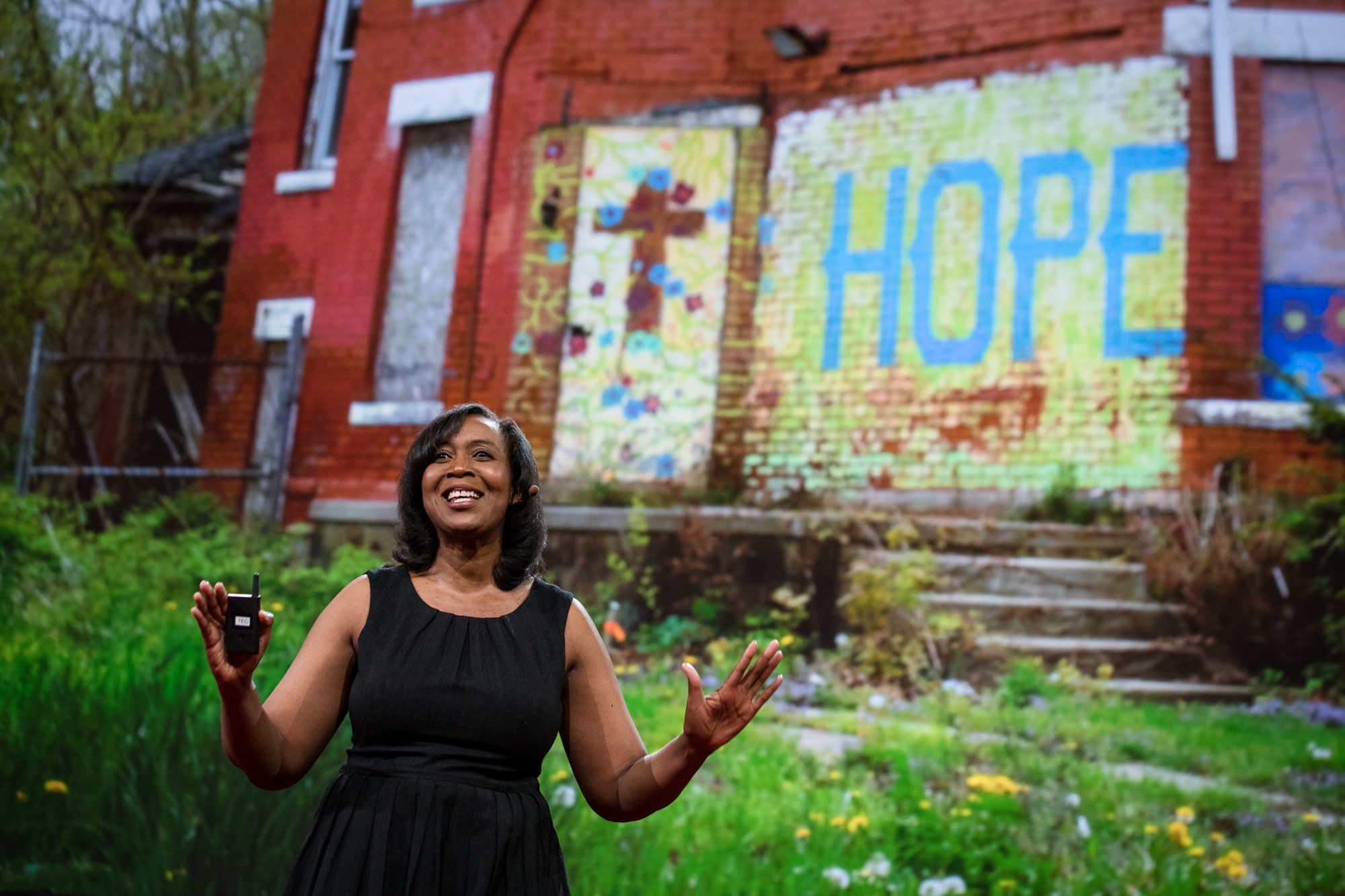 Devita Davison speaks of hope growing in Detroit — with projects that will bring local food and business back to downtown. She speaks at TED2017, April 26, 2017, Vancouver, BC, Canada. Photo: Bret Hartman / TED

Detroit sees the future. Once a booming Midwestern city and industrial giant, Detroit, Michigan, is now synonymous with decline. But where others see poverty, unemployment, obesity and blight, Devita Davison sees opportunity. In this inspiring talk, the fearless farmer explains how features of Detroit’s decay actually make it an ideal spot for urban agriculture. For instance, the abundance of vacant and abandoned lots in the city provide perfect plots of land for urban micro-farms — over 1,500 of them! “And these aren’t just plots of land where we grow potato and carrots,” says Davison. “We’re building social cohesion on top of healthy food.” To date, Davison’s FoodLab and other community organizations have transformed their city through radical initiatives that, as Davison explains, might have been impossible anywhere else — which is why she suspects that the most important urban innovations won’t come from places like Portland or New York but from Detroit.