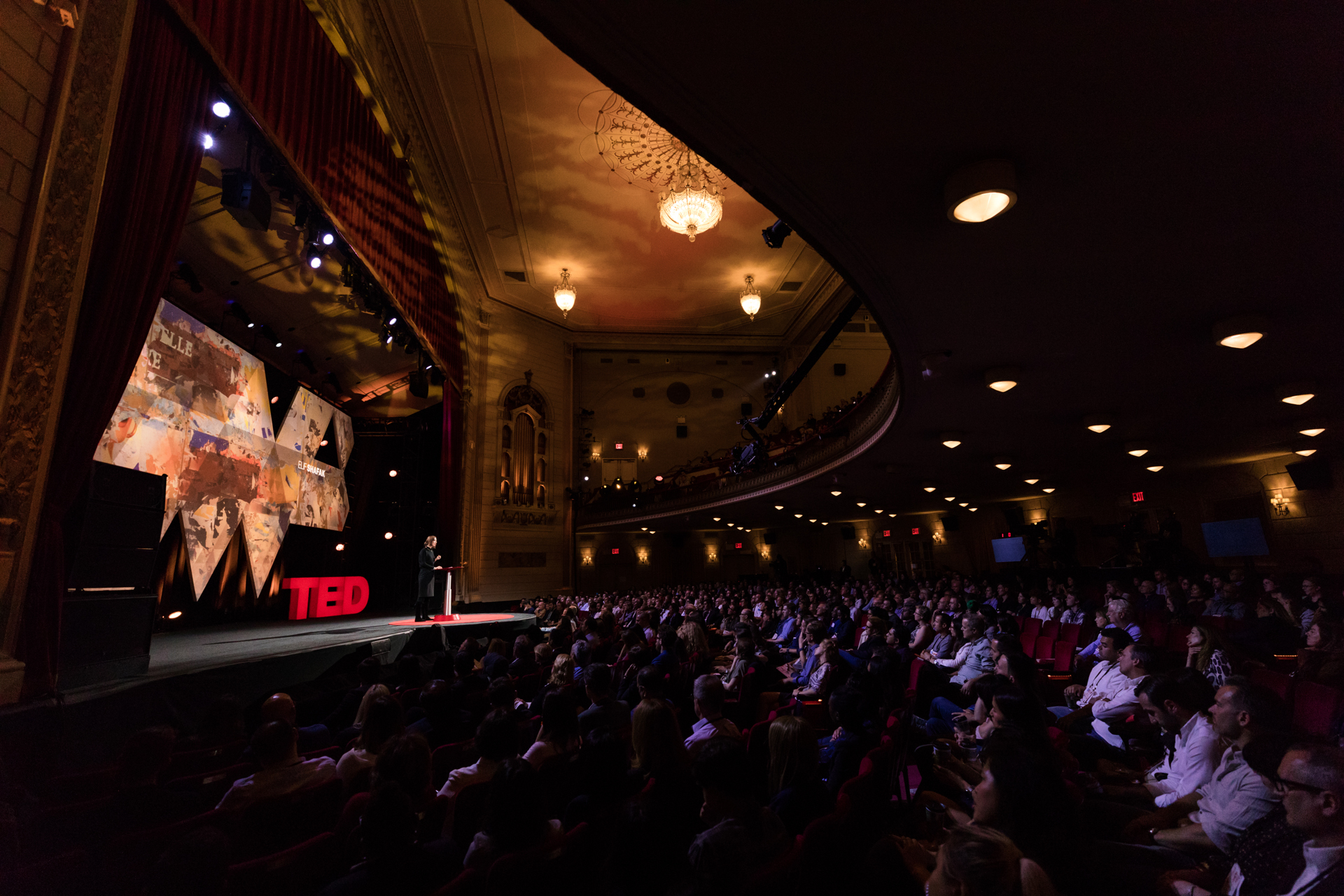 A night of TED Talks at The Town Hall theater in Manhattan covered topics ranging from climate change and fake news to the threat AI poses for democracy. Photo: Ryan Lash / TED

The advance toward a more connected, united, compassionate world is in peril. Some voices are demanding a retreat, back to a world where insular nations battle for their own interests. But most of the big problems we face are collective in nature and global in scope. What can we do, together, about it?

In a night of talks curated and hosted by TED International Curator Bruno Giussani and TED Curator, Chris Anderson, at The Town Hall in Manhattan, eight speakers covered topics ranging from climate change and fake news to the threat AI poses for democracy and the future of markets, imagining what a globally connected world could and should look like.

What stake do we have in common? Naoko Ishii is all about building bridges between people and the environment (her organization is one of the main partners in a Herculean effort to restore the Amazon). As the CEO and chair of the Global Environment Facility, it’s her job is to get everyone on board with protecting and respecting the global commons (water, air, forests, biodiversity, the oceans), if only for the simple fact that the world’s economy is intimately linked to the wellness of Earth. Ishii opened TEDGlobal>NYC with a necessary reminder: that despite their size, these global commons have been neglected for too long, and the price is too high not to make fundamental changes in our collective behavior to save them from collapse. This current generation, she says, is the last generation that can preserve what’s left of our natural resources. If we change how eat, reduce our waste and make determined strides toward sustainable cities, there’s a chance that all hope is not lost. 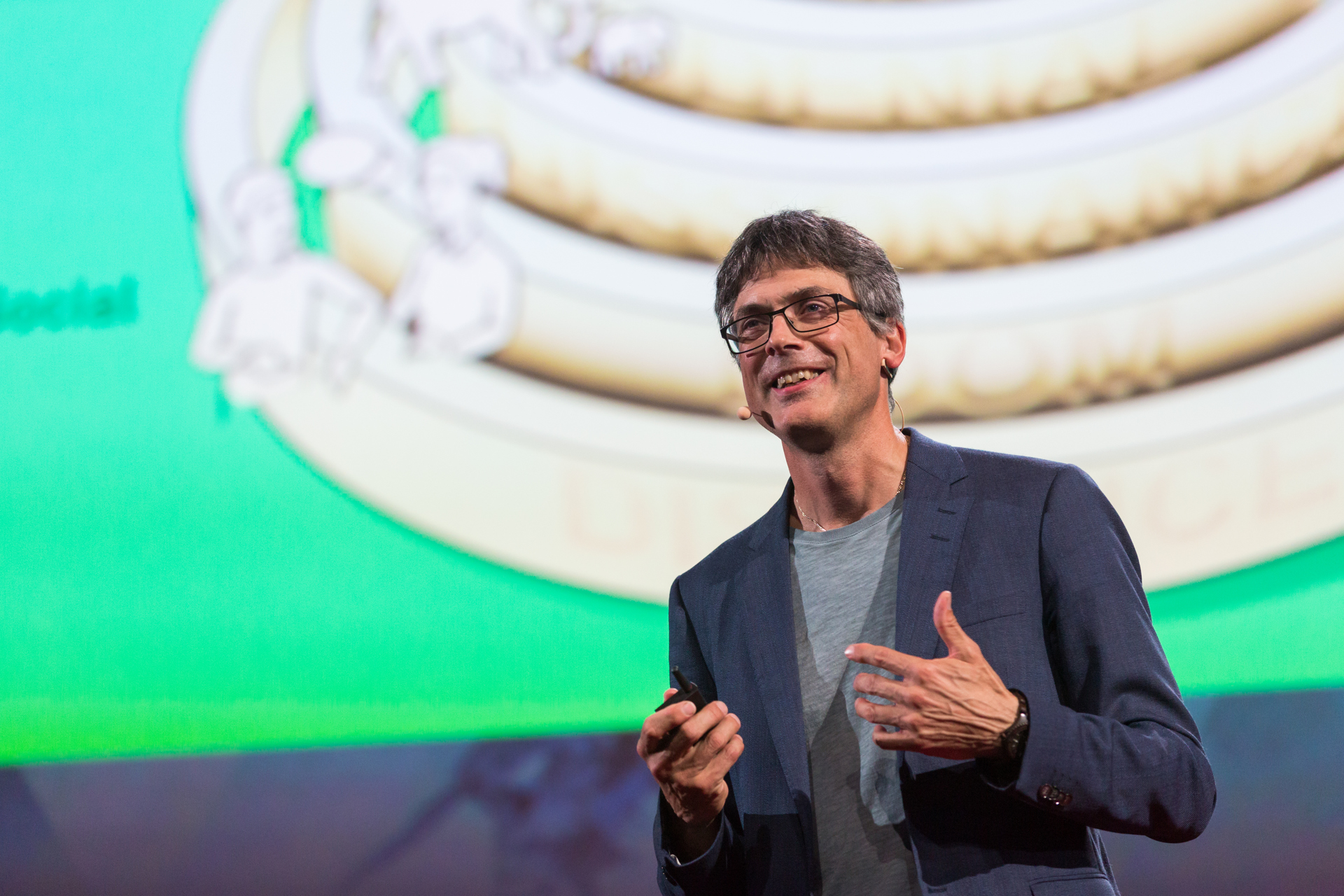 What we think about when we try not to think about global warming. From “scientese” to visions of the apocalypse, climate-change advocates have struggled with communicating the realities of our warming planet in a way that actually gets people to do something. “Climate psychologist” Per Espen Stoknes wondered why so many climate-change messages leave us feeling helpless and in denial instead of inspired to seek solutions. He shares with us his findings for “a more brain-friendly climate communication” — one that feels personal, doable and empowering. By scaling actions and examples down to local and more relatable levels, we can begin to feel more in control, and start to feel like our actions will have impact, Stoknes suggests. Stepping away from the doomsday narratives and instead reframing green behavior in terms of its positive additions to our lives, such as job growth and better health, can also limit our fear and increase our desire to engage in these important conversations. Our planet may be in trouble, but telling new stories could just save us.

Building the resilient cities. With fantastic new maps that provide interactive and visual representations of large data sets, Robert Muggah articulates an ancient but resurging idea: that cities should be not only the center of economic life but also the foundation of our political lives. Cities bear a significant burden of the world’s problems and have been catalysts for catastrophe, Muggah says — as an example, he shows how, in the run-up to the civil war in Syria, fragile cities like Homs and Aleppo could not bear the weight of internally displaced refugees running away from drought and famine. While this should alarm us, Muggah also sees opportunity and a chance to ride the chaotic waves of the 21st century. Looking around the world, he puts down six principles for building the resilient city. For instance, he highlights integrated and multi-use solutions like Seoul’s expanding public transportation system, where cars once dominated how people move. The current model of the nation-state that emerged in the 17th century is no longer what it once was; nation-states cannot face global crises decisively and efficiently. But the work of urban leaders and coalitions of cities like the C-40 can guide us to a healthier, more peaceful planet. 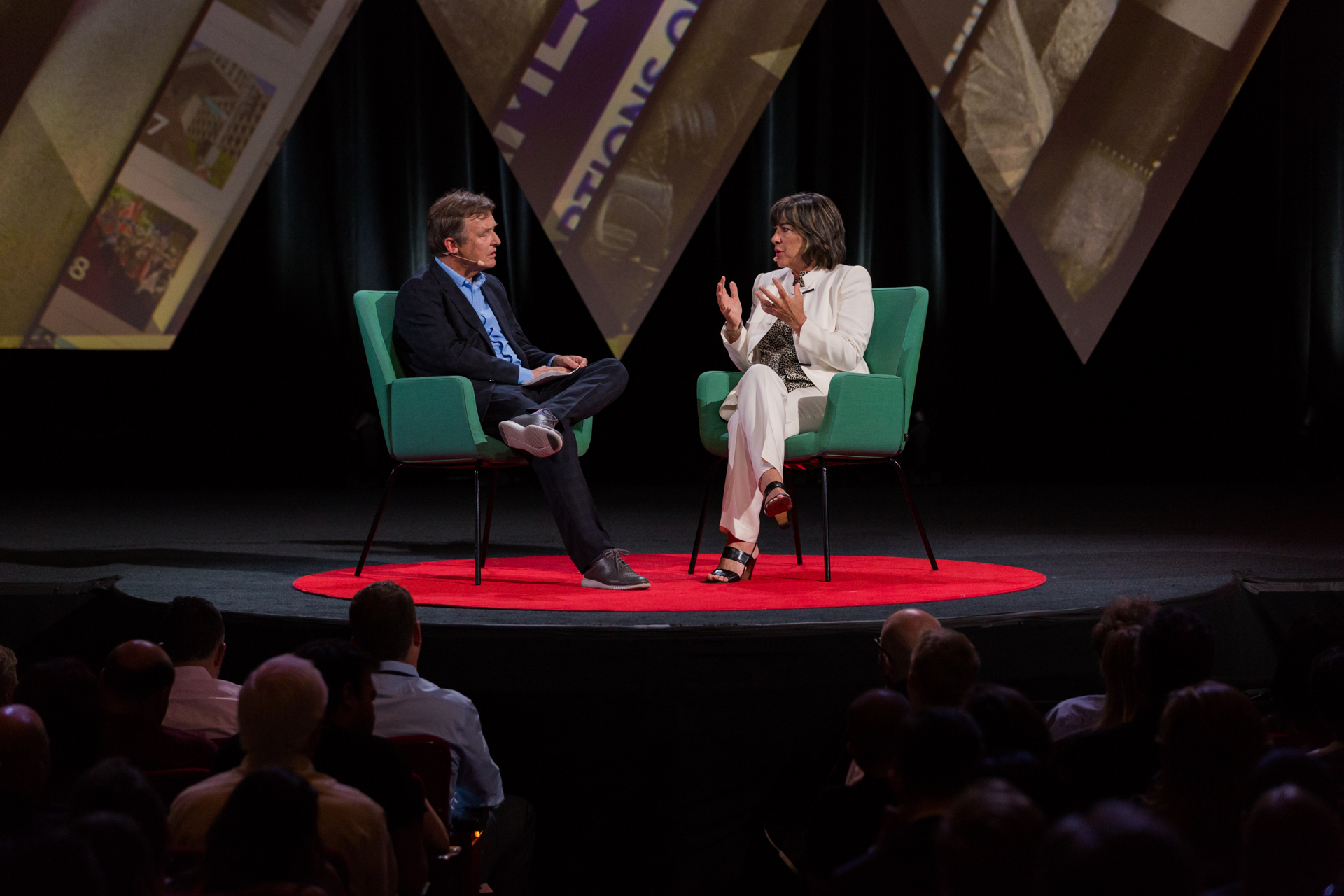 Seeking the truth. Known worldwide for her courage and clarity, Christiane Amanpour has spent the past three decades interviewing business, cultural and political leaders who have shaped history. This time she’s the one being interviewed, by TED curator Chris Anderson, in a comprehensive conversation covering fake news, objectivity in journalism, the leadership vacuum in global politics and much more. Amanpour opens with her experience reporting the Srebrenica genocide in the 1990s, and connects it to the state of journalism today, making a strong case for refusing to be an accomplice to fake news. “We’ve never faced such a massive amount of information which is not curated by those whose profession leads them to abide by the truth,” she says. “Objectivity means giving all sides an equal hearing but not creating a forced moral equivalence.” Facebook and other outlets need to step up and combat fake news, she continues, calling for a moral code of conduct and algorithms to “filter out the crap” that populates our news feeds. Amanpour — fresh from her interview with French president Emmanuel Macron, his first with an international journalist — leaves us with some wisdom: “Be careful where you get information from. Unless we are all engaged as global citizens who appreciate the truth, who understand science, empirical evidence and facts, then we are going to be wandering around — to a potential catastrophe.” 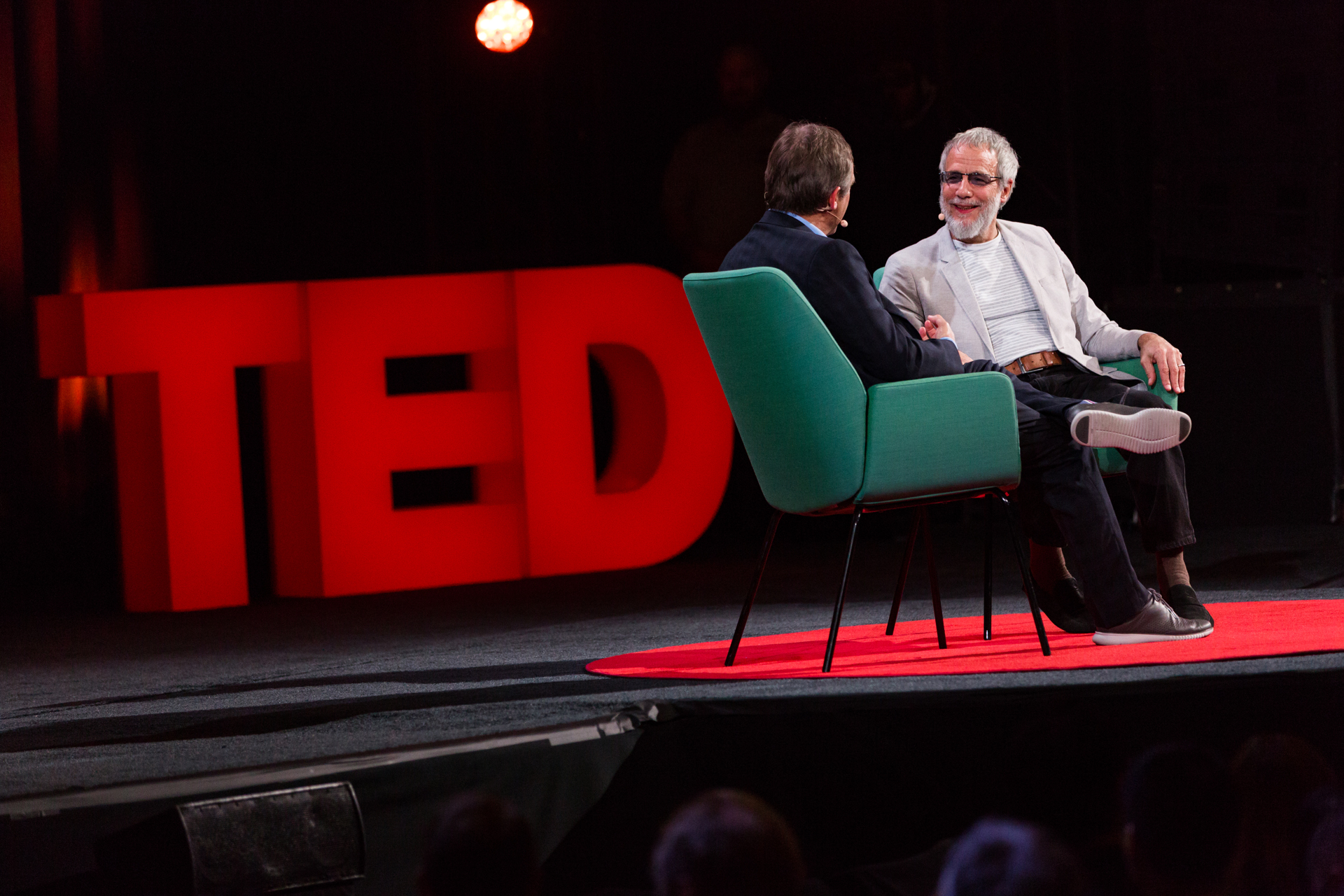 Though he had a cold and could not sing for us, Yusuf Islam (Cat Stevens) takes a moment onstage to discuss faith and music with TED’s own Chris Anderson, at TEDGlobal NYC, September 20, 2017, The Town Hall, New York. Photo: Ryan Lash / TED

A cat’s attic. Yusuf Islam (Cat Stevens)‘s music has been embraced by generations of fans as anthems of peace and unity. In conversation with TED curator Chris Anderson, Yusuf discusses the influence of his music, the arc of his career and his Muslim faith. “I discovered something beyond the facade of what we are taught to believe about others,” Yusuf says of his embrace of Islam in the late ’70s. “There are ways of looking at this world other than the material … Islam brought together all the strands of religion I could ever wish for.” Connecting his return to music after 9/11 to his current work and new album, The Laughing Apple, Yusuf sees his mission as spreading messages of peace and hope. “Be careful about exclusion,” he says. “In the [education] curriculum, we’ve got to start looking towards a globalized curriculum … We should know a bit more about the other to avoid the build up of antagonization.”

“Wherever I look, I see nuances withering away.” In a personal talk, author and political commentator Elif Shafak cautions against the dangers of a dualist worldview. A native of Turkey, she has experienced the devastation that a loss of diversity can bring firsthand, and she knows the revolutionary power of plurality in response to authoritarianism. She reminds us that there are no binaries, whether between developed and developing nations, politics and emotions, or even our own identities. By embracing our countries and societies as mosaics, we push back against tribalism and reach across borders. “One should never ever remain silent for fear of complexity,” Shafak says.

We know what we are saying “no” to, but what are we saying “yes” to? In her classic book The Shock Doctrine — and her new book No Is Not Enough — writer and activist Naomi Klein examines how governments use large-scale shocks like natural disasters, financial crises and terrorist attacks to exploit the public and push through radical pro-corporate measures. At TEDGlobal>NYC, Klein explains that resistance to policies that attack the public is not enough; we also must have a concrete plan for how we want to reorganize society. A few years ago, Klein and a consortium of indigenous leaders, urban hipsters, climate change activists, oil and gas workers, faith leaders, anarchists, migrant rights organizers and leading feminists decided to lock themselves in a room to discuss their utopian vision for the future. They emerged two days later with a manifesto known as The Leap Manifesto, which is all about caring for the earth and one another. Klein shares a few propositions from the platform, including a call for a 100 percent renewable economy, new investment in the low-carbon workforce, comprehensive programs to retrain workers who are losing their jobs in extractive and industrial sectors, and a demand that those who that profit from pollution pay for it. “We live in a time where every alarm in our house is going off,” she concludes. “It’s time to listen. It’s time — together — to leap.” 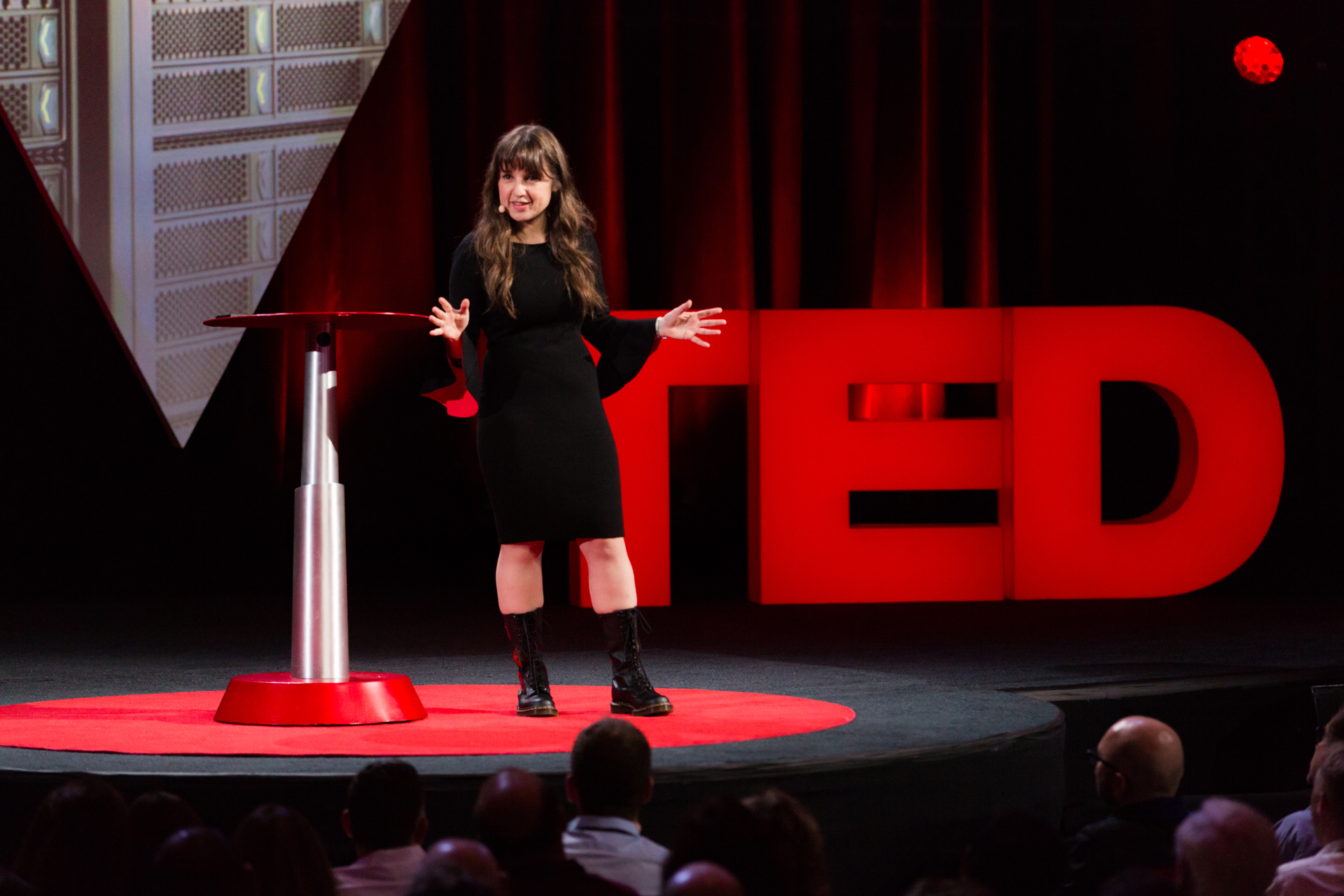 Could a Facebook algorithm tell us how to vote? Zeynep Tufekci asks why algorithms are controlling more and more of our behavior, like it or not. She speaks at TEDGlobal>NYC, September 20, 2017, The Town Hall, New York. Photo: Ryan Lash / TED

There’s nothing left to fear from AI but the humans behind it. Technosociologist Zeynep Tufecki isn’t worried about AI — it’s the intention behind the technology that’s truly concerning. Data about you is being collected and sold daily, says Tufecki, and the prodigious potential of machine learning comes with potentially catastrophic risks. Companies like Facebook and Google haven’t thoroughly factored in the ethical dilemmas that come with automated systems that are programmed to exploit human weakness in order to place ads in front of exactly the people most likely to buy. If not checked, the ads and recommendations that follow you around well after you’ve stopped searching can snowball from well-meaning to insidious. It’s not to say that social media and the internet are all bad — in fact, Tufecki has written at length about the benefits and power it has bestowed upon many — but her talk is a strong reminder to be aware of the negative potential of AI as well as the positives, and to fight for our collective digital future. 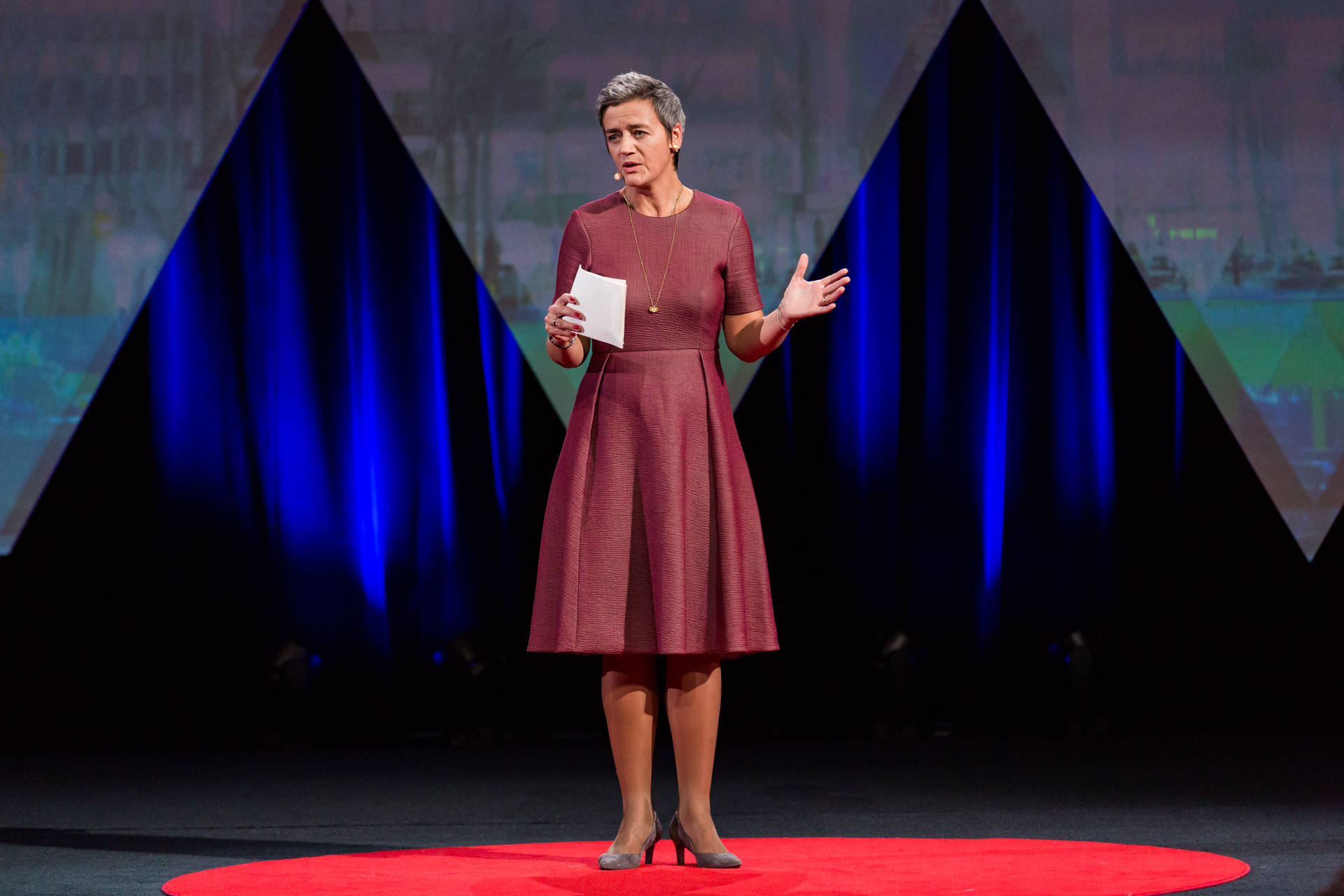 The fight for fairness. This June, the EU levied a record $2.7 billion fine against Google for breaching antitrust rules by unfairly favoring its comparison shopping service in search. More than double the previous largest penalty in this type of antitrust case, the penalty confirmed Margrethe Vestager, European Commissioner for Competition, as one of the world’s most powerful trustbusters. In the closing talk of TEDGlobal>NYC, Vestager makes the connection between how fairness in the markets — and corrective action to ensure it exists — can establish trust in society and each other. Competition in markets gives us the power to demand a fair deal, Vestager says; when it’s removed, either by colluding businesses or biased governments, trust disappears too. “Lack of trust in the market can rub off on society, so we lose trust in society as well,” she says. “Without trust, everything becomes harder.” But competition rules — and those that enforce them — can reestablish the balance between individuals and powerful, seemingly invulnerable multinational corporations. “Trust cannot be imposed, it has be to earned,” Vestager says. “Competition makes the market work for everyone. And that’s why I’m convinced that real and fair competition has a vital role to play in building the trust we need to get the best out of society. And that starts with enforcing our rules.”

Shine as bright as you can. Electro-soul duo Ibeyi closed out TEDGlobal>NYC with a minimalistic, deeply transportive lyrical set. A harmony of voices, piano and cajon drum filled the venue as the pair sang in a mixture of Yoruba, English and French. “Look at the star,” they sing. “I know she’s proud of who you’ve been and who you are.”

TEDGlobal>NYC was made possible by support from Ford Foundation, The Skoll Foundation, United Nations Foundation and Global Citizen.