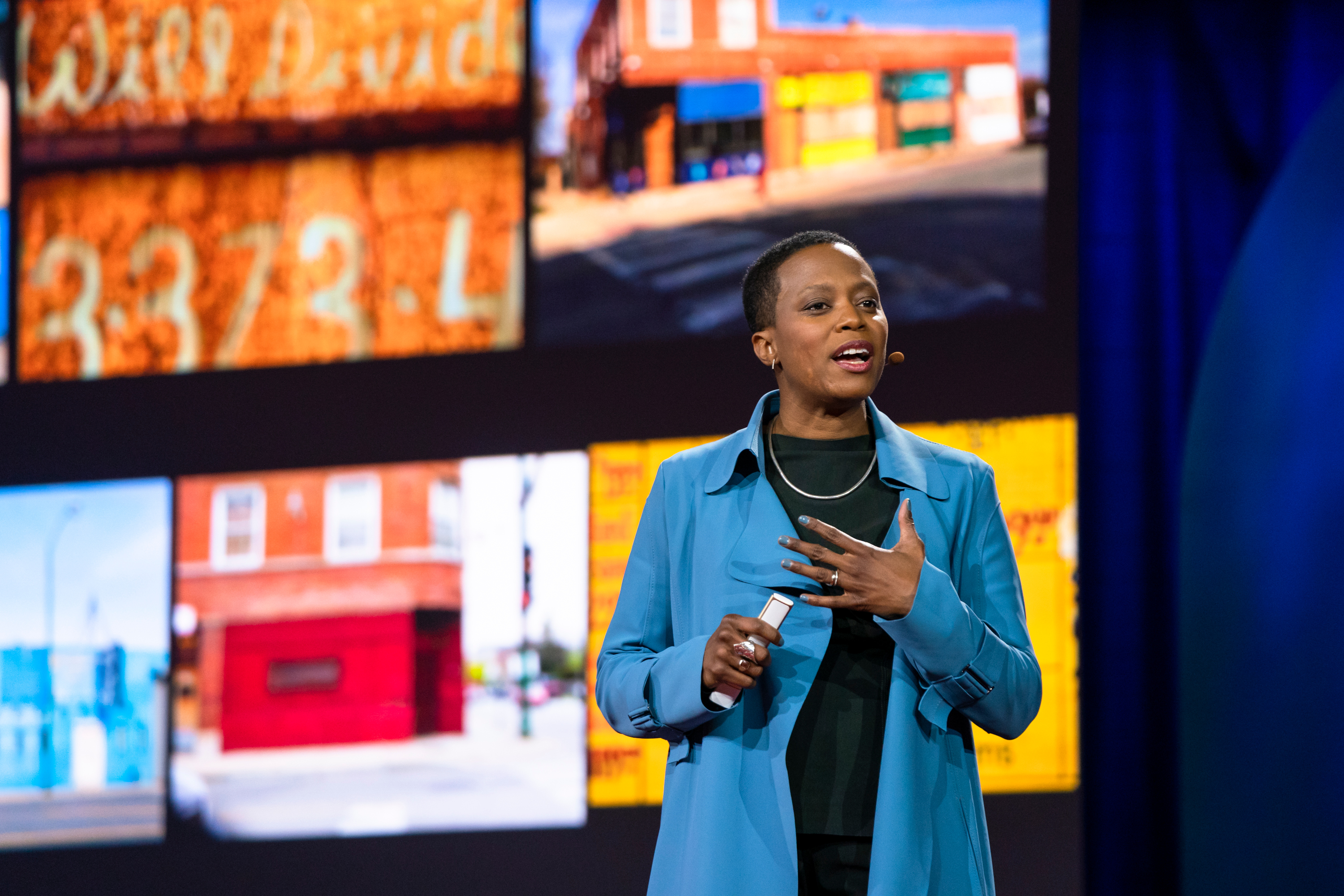 Amanda Williams explores the colors of her hometown neighborhood in Chicago — including the colors of historic redlining — in a bold project called “Color(ed) Theory.” She speaks at TEDWomen 2018: Showing Up, on November 29, 2018, in Palm Springs. (Photo: Callie Giovanna / TED)

Sustainability lessons from the sloth. Sloths have a reputation for being languorous and lazy — they’re named after one of the seven deadly sins, after all. But they are misunderstood, says zoologist Lucy Cooke, who has spent more than a decade documenting the strange lives of the world’s slowest mammal. She’s come away with an important insight: “Learning the truth about the sloth may help save us and the planet we both call home,” she says. Sloths come from an ancient line of mammals that has been around for more than 40 million years (compared to around 300,000 years for humans). The secret to their success lies in their slow, sustainable and, well, slothful existence — which is more mindful than lazy, Cooke says. For instance, sloths have a massive four-chambered stomach and an unbelievably slow metabolism, sometimes taking up to one month to process a single leaf. This pace lets them eat many varieties of leaves, including some that would poison other, faster-digesting animals. They also have more neck bones than any other mammal — even giraffes — allowing them to turn their heads up to 270 degrees to graze without having to waste energy moving their body. Cooke thinks we can take a lesson from the sloth’s playbook: While we might not be able to lower our metabolism, we can slow down, reduce waste, and be more economical with our energy. If we can do this, we just might have a chance to hang around as long as the sloth.

Building robots that are friends, not foes. Robots aren’t perfect — after all, their algorithms are trained by flawed humans. AI can inherit our biases; an AI might recognize a man with a spatula as a woman, or a woman driving a car as a man. Roboticist Ayanna Howard asks: Why do we rely on biased algorithms to run our robots, and how do we fix them? We have an emotional connection to these robotic systems, Howard suggests. They take the chaos that is in our life and make it a little bit manageable — and thus, we treat them as authority figures, and allow them to pressure us to making emotional decisions. But there is hope. We can train robots to be better than us, and we can hold robot creators accountable for their creations. It’s not really the robots that we fear, Howard says — at the end of the day, we fear ourselves. She implores us to create a better future where robots are our friends, not foes.

Building AI “guardian angels.” Imagine an extra brain that knows us better than we know ourselves, that exists “with us, beside us, experiencing our world with us … always connected, always processing, always watching.” Nivruti Rai believes that AI systems could become these kinds of guardian angels. She and her research team have analyzed mountains of traffic data In India, where vehicles of every type and speed compete with humans (and animals) for road space. Machine-learning algorithms thrive on regular, repetitive data, but Indian roadways are loaded with “corner cases” — one-in-a-million incidents that present major obstacles to comprehending complex traffic systems. Rai is using these to her advantage, building an open-source database that includes corner cases to help train safer, more robust autonomous driving algorithms. If AI systems can safely navigate India’s traffic patterns, then they surely can solve other complex problems, she says — as long as we have a sufficiently robust data set.

Education is freedom work. “Around the world, black girls are struggling to be seen, working to be free and fighting to be included in the landscape of promise that a safe educational space provides,” says author and social justice scholar Monique W. Morris. In America, she tells us, black girls are seven times more likely than others to get suspended and three times more likely to be sent to juvenile court; they are overrepresented across the spectrum of disciplinary action in schools. Age compression is partly to blame — studies show that people perceive black girls as older (and less in need of protection) than they actually are — and their very appearance can be targeted for punishment, like the group of high-schoolers in South Africa who were penalized for wearing their hair in its natural state. (“Where can we be black if we can’t be black in Africa?” the girls asked.) Morris advises parents to start conversations with schools so that practices that harm black girls are eliminated. If schools are to be places of healing, she says, they’ll need fewer police officers and more counselors. “If we commit to this notion of education as freedom work, we can shift educational conditions so that no girl — even the most vulnerable among us –will get pushed out of school,” Morris says. “And that’s a win for all of us.” 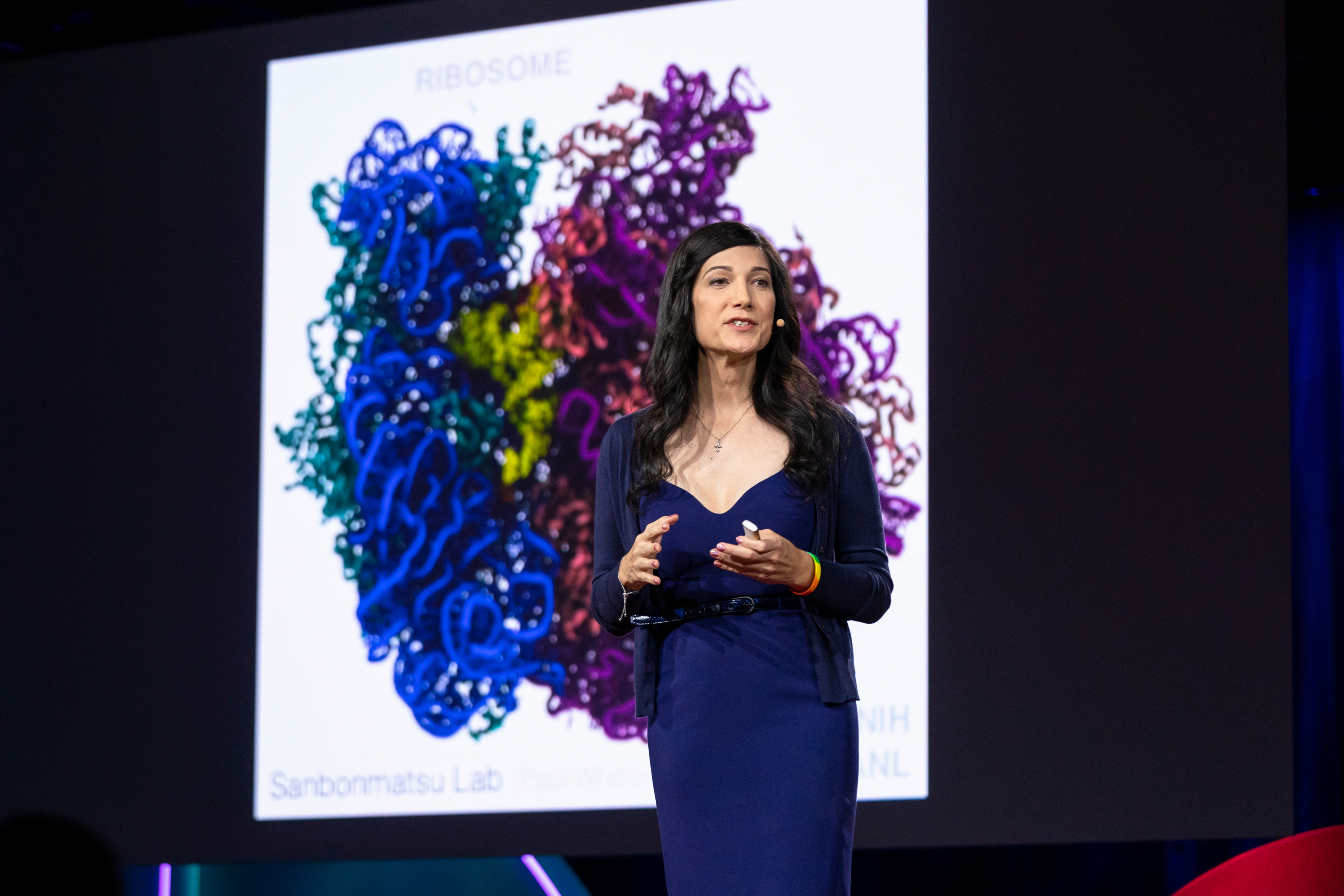 Karissa Sanbonmatsu is a geneticist who explores what information we store in our genes — including surprising information about gender. She speaks at TEDWomen 2018: Showing Up, on November 29, 2018, in Palm Springs. (Photo: Callie Giovanna / TED)

What does it mean to be a woman? A scientist’s perspective. Biology researcher Karissa Sanbonmatsu studies DNA and why it gets itself all tied up in knots: the bends and folds that affect our lives on a fundamental level. As a scientist and trans woman, she and several other women across scientific disciplines are using epigenetics to search for the biomarkers that define gender on a molecular level by observing these twisty DNA structures. “One of the stunning things about our cells is that the components inside them are actually biodegradable,” she says. “They dissolve and then they’re rebuilt each day — kind of like a traveling carnival.” It’s this discovery that’s led to several others, specifically insights during pregnancy. Hormones, it turns out, trigger the formation of knots that can alter how we process life events, as well as the biological sex and brain development between trimesters — meaning that gender may develop separately in the womb. Asking what it means to be a woman, when people come in so many shapes and sizes, may not be the right question, says Sanbonmatsu. “Maybe becoming a woman means accepting ourselves for who we really are and acknowledging the same for each other.”

The intersection of color, race and space. Growing up in segregated Chicago, artist Amanda Williams thought that color could not be separated from race. As she puts it: “Racism is my city’s vivid hue.” While studying color theory in college, Williams learned about Josef Albers’ theory of color, which holds that the way we view color is actually subjective, relational, each color affected by its neighbor. Williams used this theory to understand the redlining in her neighborhood: In the 1930s, the federal government created a color-coding system for neighborhoods, and black neighborhoods, marked as “red,” didn’t receive federal housing loans. In response to this unfair characterization, Williams decided to create her own color palette, one that would speak to the people in her neighborhood. The result was “Color(ed) Theory,” a two-year art project that projected her own palette onto her neighborhood. She started by gathering stories and memories to reveal colors uniquely understood by black people. She then went for the biggest canvas she could find: houses, specifically ones that were going to be demolished. The boldly painted houses provoked a fresh reaction from the people around her and beyond. “Color(ed) Theory made unmistakably visible, the uncomfortable questions that institutions and governments have to ask themselves about why they do what they do,” says Williams. “They ask equally difficult questions of myself and my neighborhood counterparts about our value systems and what our path to collective agency needs to be.”