Session 4 of TED2017 kicked off with an interview with perhaps the greatest athlete of all time, Serena Williams, and closed with the potentially world-changing announcement of this year’s TED Prize wish from Raj Panjabi. In between, the session saw a surprise talk directly from the Vatican by His Holiness Pope Francis — the culmination of a year of collaboration — and a heartfelt talk by Anna Rosling Rönnlund along with a short remembrance of her father-in-law, TED legend Hans Rosling. Hosted by TED’s curator, Chris Anderson, and TED Prize Director Anna Verghese, the session will likely go down in history as one of TED’s most memorable.

Below, recaps of the talks from Session 4, in chronological order.

An interview with Serena Williams. Twenty-three Grand Slams later, tennis superstar Serena Williams sits down with journalist Gayle King on the TED stage to share a warm, mischievous conversation about her life, love, wins, losses — starting with the story of how she accidentally shared her baby news with the world. Read a full recap of the interview here. 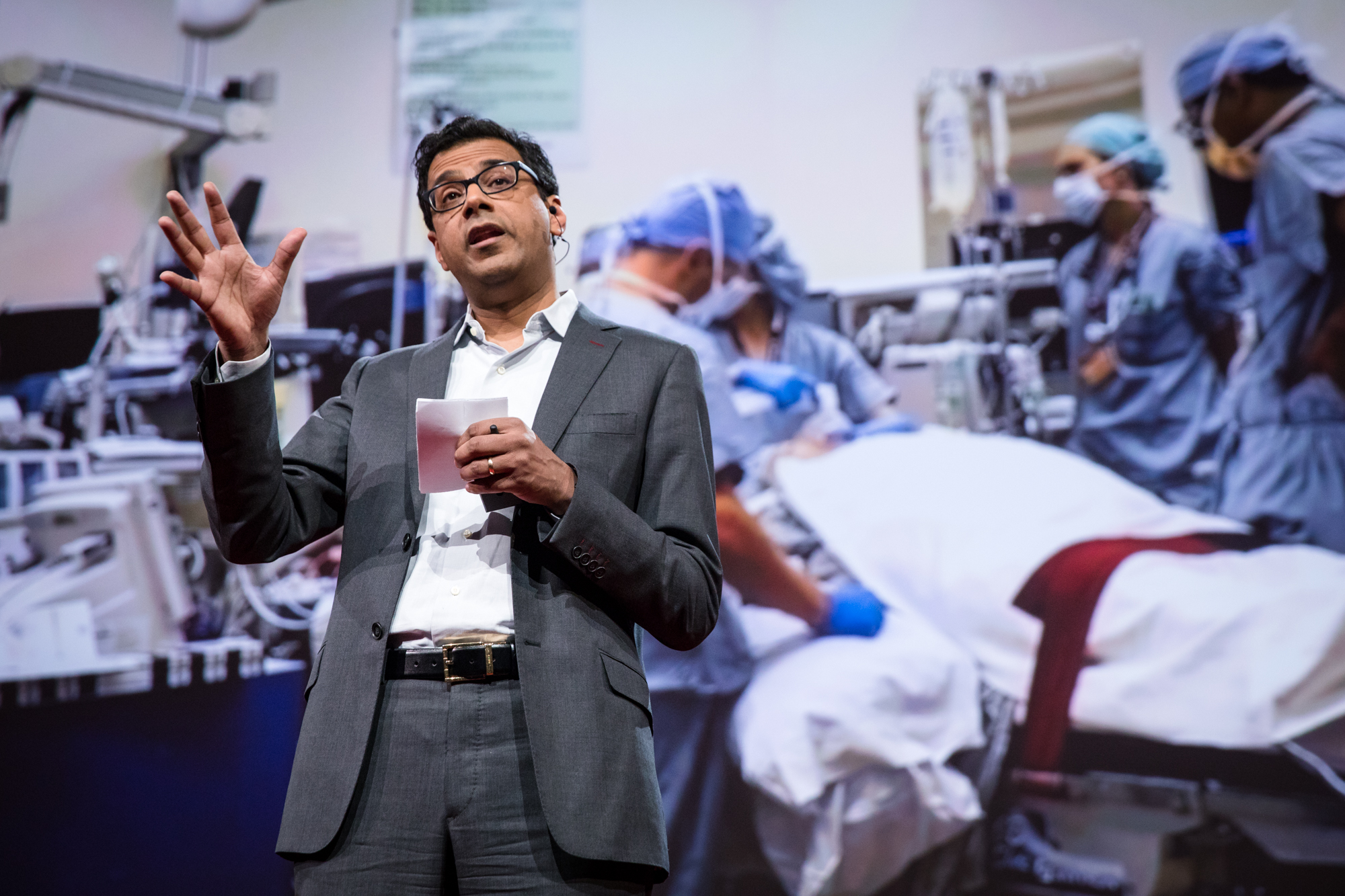 How to get better at what you do. “It’s not just how good you are now, it’s how good you’re going be that matters,” says journalist and surgeon Atul Gawande. So when, several years into his surgical practice, he noticed that his skills were no longer improving, he asked a simple question: How do we get better at the things we do? He found that the answer was divided into two camps. The first was the traditional view, which emphasizes education and learning how to manage your own improvement (the view favored by most professional fields), and the second was the athletic view, which emphasized continuous coaching. Gawande wondered if the principle of coaching held for other fields, testing it first on himself and then in delivery centers in Uttar Pradesh, India. In both cases, the results were remarkable. “[Coaches] are your external eyes and ears, providing a more accurate picture of your reality,” he says. “They break your actions down and help you build them back up again.” 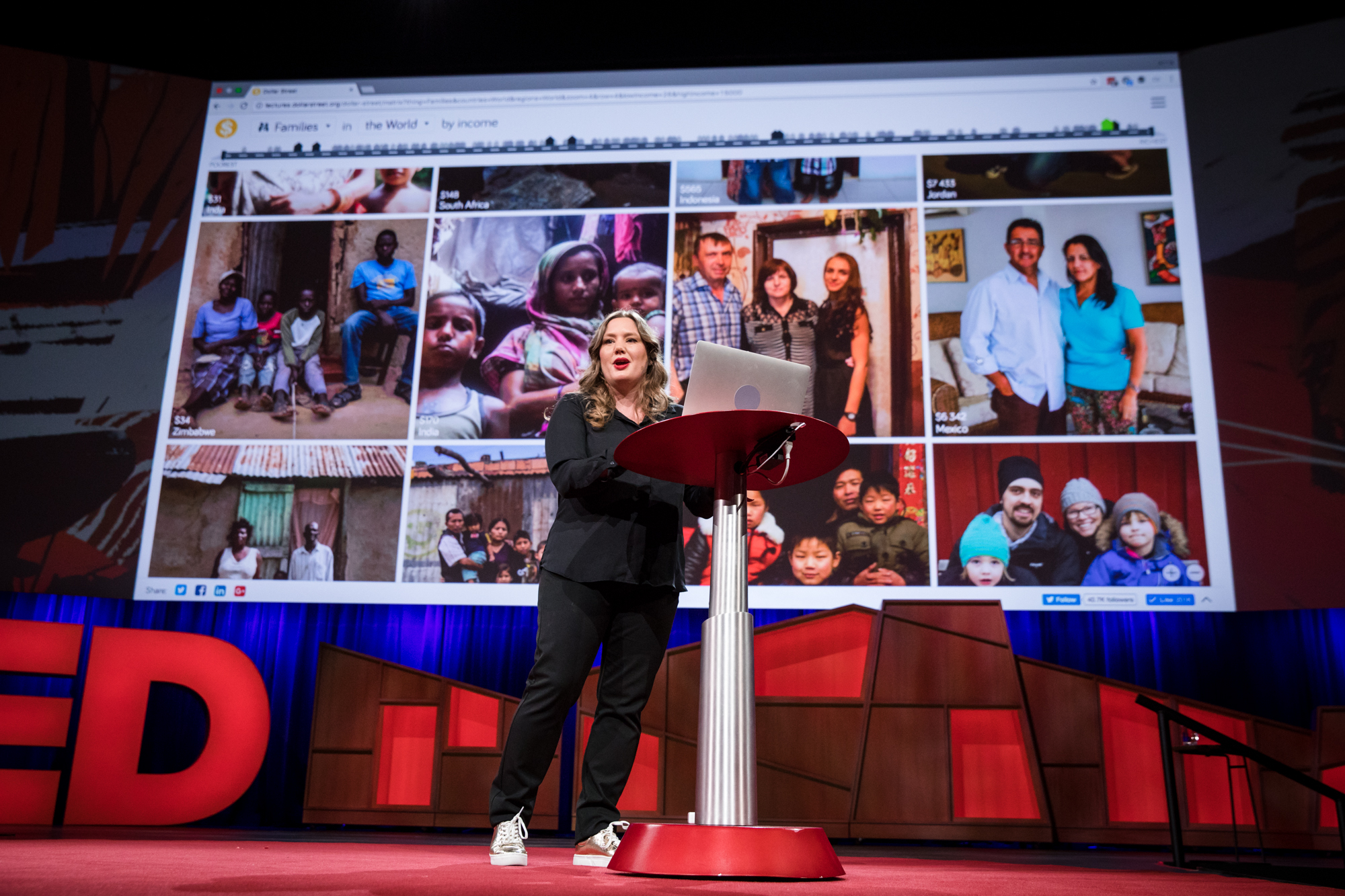 Anna Rosling Rönnlund demos Dollar Street, a data collection site that allows you to imagine life at many income scales: Where do you sleep? How do you cook? She speaks at TED2017, April 25, 2017, Vancouver, BC, Canada. Photo: Bret Hartman / TED

How can we better understand the world? Our understanding of the world typically stems from school, data, media or the internet. The result is an extraordinarily narrow worldview that leaves us unable to grasp how normal people live their daily lives. Passionate about the visual side of data and changing people’s mindset about the world, the co-founder of Gapminder, Anna Rosling Rönnlund, invented the project Dollar Street. Imagine if the world lived on a street where houses are ordered by income, the poorest on the left and the richest on the right, with everyone else in between. Now, imagine if you could visit these homes and compare the everyday functions of the homes. This is Dollar Street: a well-structured database of everyday life on different income levels that draws data, photos and video from 270 homes in 50 countries and counting. Through the website, you can easily see and compare beds, stoves, toilets and other household items based on income levels all over the world. And we find that, as Rönnlund says, “The person staring back at us from the other side of the world actually looks like you.”

A special message from the Vatican. A single individual is enough for hope to exist, and that individual can be you, says His Holiness Pope Francis in a searing TED Talk delivered by video directly from Vatican City. After a brief intro from TED’s International Curator, Bruno Giussani, who coordinated the creation of the talk over the course of a year with the Vatican. Francis delivered a hopeful message to people of all faiths, providing illuminating commentary on the world as we currently find it and calls for equality, solidarity and tenderness to prevail. A talk of this significance required careful planning, collaboration, attention to detail — and the ability to keep a secret, as Pope Francis was not announced in the event’s public program. This is the first time he has addressed an international conference. Watch the full talk here. 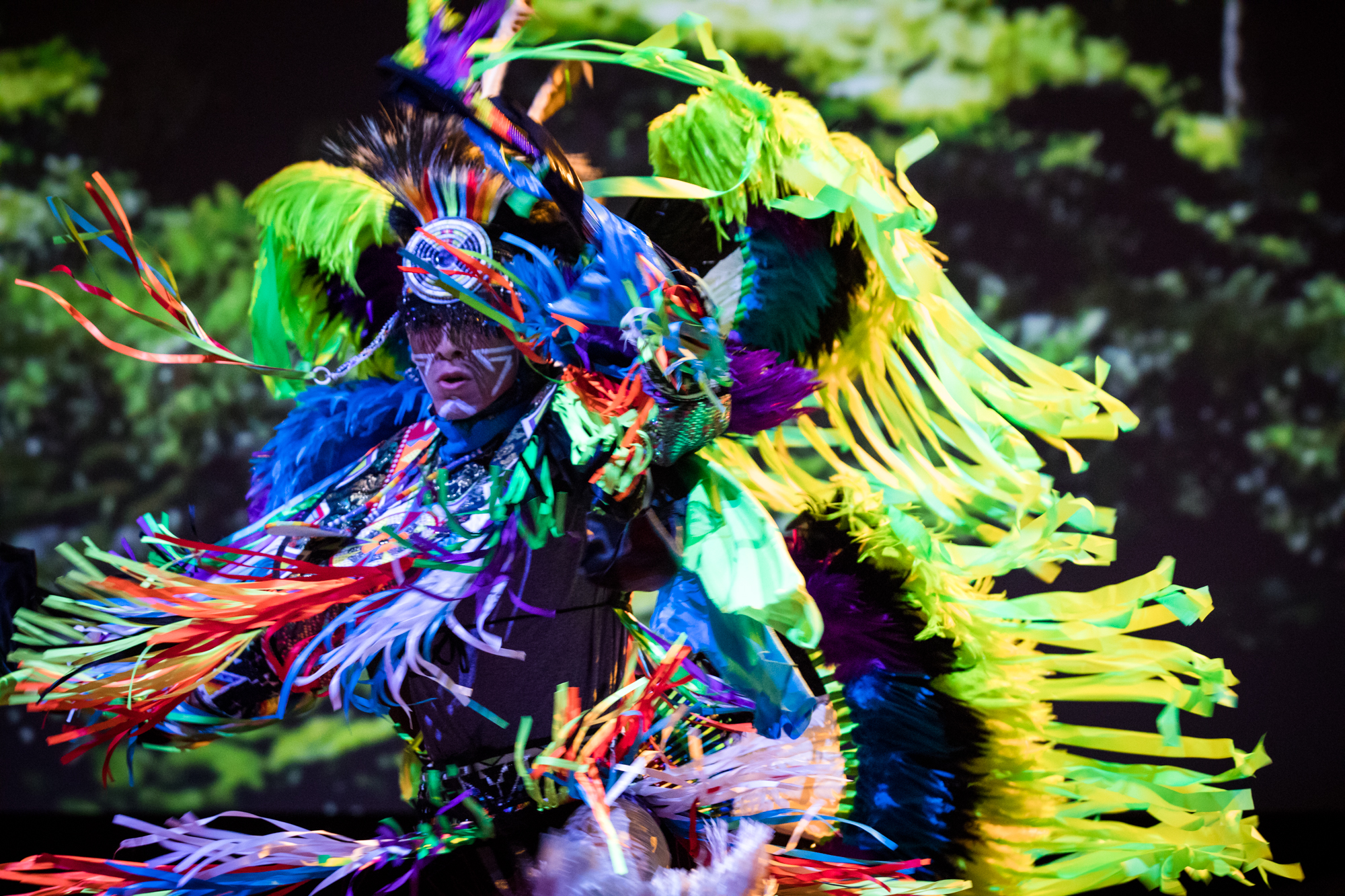 Remember to love thy mother, the Earth. Movement artists Jon Boogz and Lil Buck debut their newest work, “Honor thy mother,” a delicate yet powerful performance that draws from nature’s tormented relationship with humanity. The visual message, punctuated by Mother Earth in spoken word and dance, is accompanied by an epic, original composition of violin and cello. As Mother Earth warns of escalating elements, voice awash with scorn from the lists of human neglect, the piece reaches a soaring crescendo with neon-colored Native American dance. In the end, the storm passes and all is quiet before Mother Earth plants the seeds of life and hope again.

Now we shift gears to the TED Prize. Director Anna Verghese steps onstage to tell us about the $1 million award, which is given annually to a bold thinker with an ambitious idea to spark global change. TED Prize wishes have big impact — and in the fall, the TED Prize is teaming up with CNN’s Great Big Story for a six-part docu-series called “Torchbearers” that will follow inspiring individuals who are transforming their communities by turning TED Prize wishes into action. Verghese is excited for the 2017 Prize winner to reveal his wish. But first, an update from the 2016 winner. 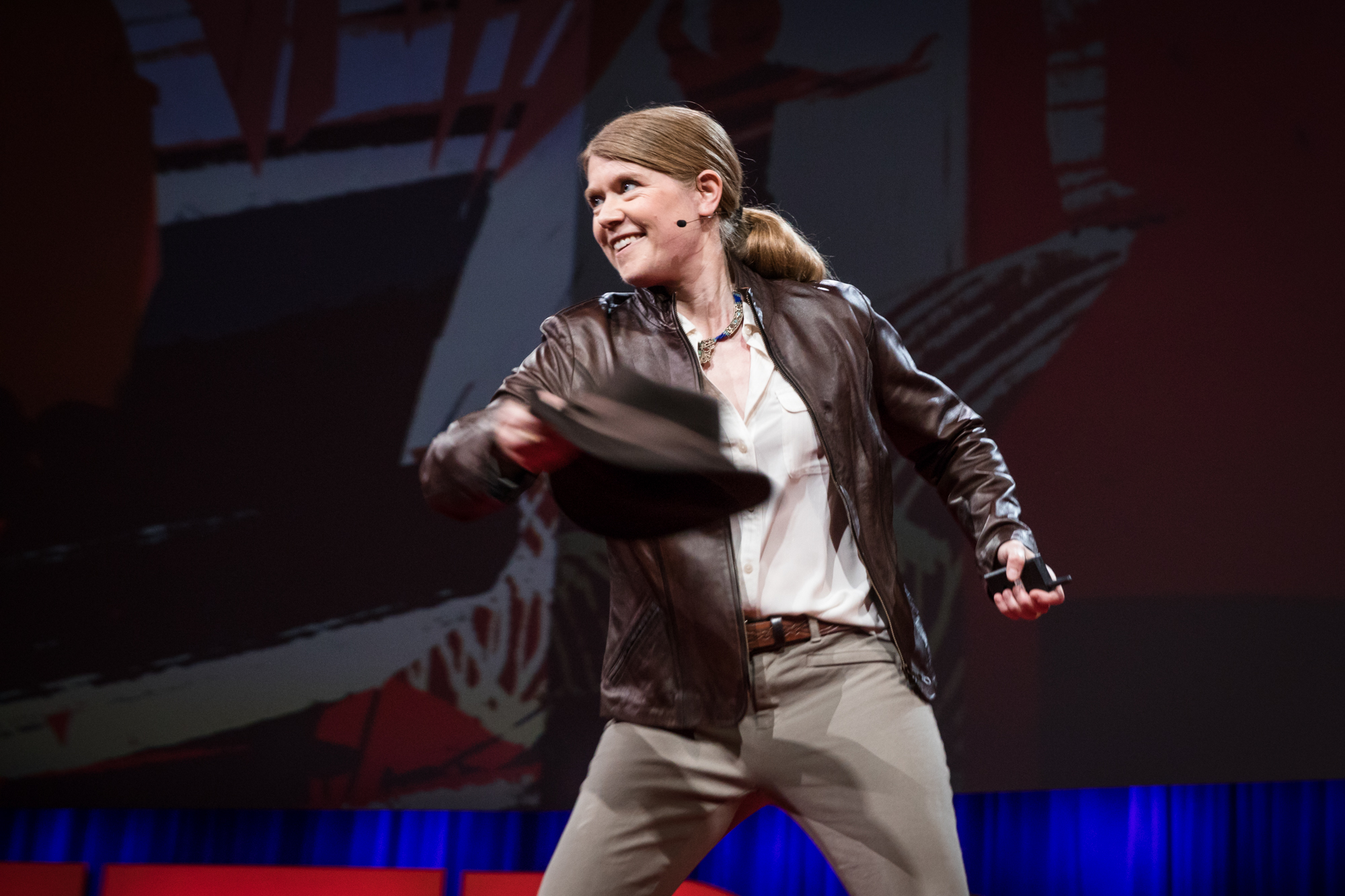 Indiana Jones hats, all around. Sarah Parcak‘s GlobalXplorer lets everyday people live out their archaeology dreams. This citizen science platform launched in January 2017, and so far its 45,000 registered users have searched more than 10.5 million satellite images in an effort to map sites in need of exploration and protection across Peru. It’s an area equivalent to 100,000 square kilometers, and Parcak says it would have taken her team working nonstop for a year to do the same amount of work. (Read more on what they’ve found.) Sarah takes off the Indiana Jones hat she brought with her onstage when accepting the TED Prize last year, and throws it to the audience. “This dream doesn’t belong to me any more,” she says. “It belongs to you.”

A personal, local revolution in health care. After Liberia’s devastating civil war, the country was left with just 51 doctors to treat a population of four million. This, says 2017 TED Prize winner Raj Panjabi, is the equivalent of the city of San Francisco having just 10 doctors. To help fill this shocking gap in care, Panjabi founded Last Mile Health with $6,000 he and his wife received in lieu of wedding gifts. In the ten years since, the organization has created a model to train, equip and pay community health workers who are able to bring lifesaving health care door-to-door in the remote rainforest regions of the country where the nearest clinic is too far away. Hear Raj’s incredible story — and read the reveal of his ambitious wish to bring health care to the billion people around the world who currently lack access to it.