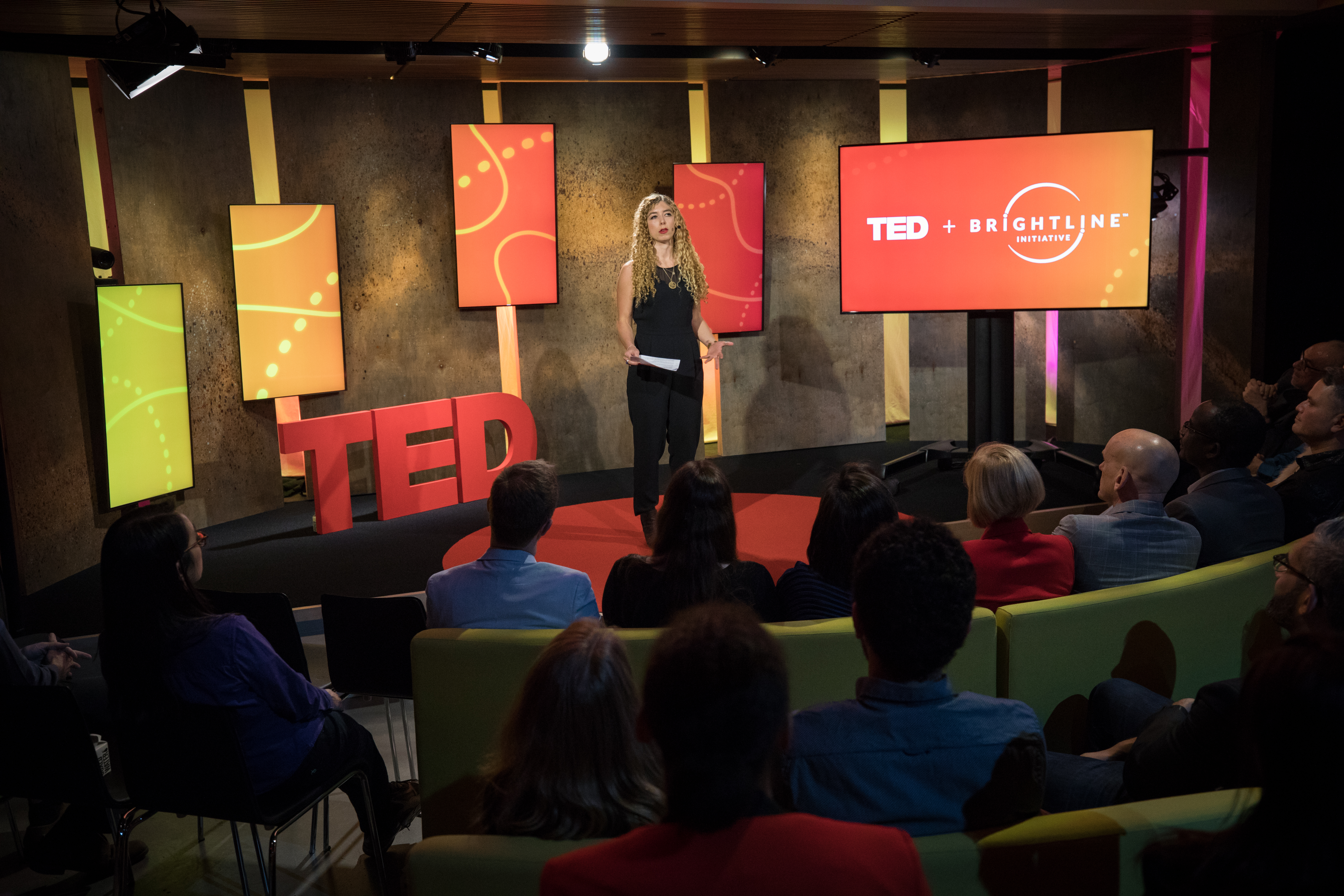 Let’s face it: it’s hard to get stuff done. How can we, together, realize our most ambitious dreams?

To celebrate the efforts of smart people who are changing the world while doing business as usual, TED has partnered with the Brightline Initiative, a non-commercial coalition of leading organizations dedicated to helping leaders turn ideas into reality. In a special session of talks hosted by TED content producer Cloe Shasha at TED HQ in New York City on Tuesday night, five speakers (and one remarkable performer) — co-curated by technology curator Alex Moura and business curator Corey Hajim — explored how to innovate and thrive in a world that changes daily. After opening remarks from Brightline’s Ricardo Vargas, the session kicked off with Harvard Business School professor Amy Edmondson.

Why our future depends on “teaming.” Have you ever stayed to watch the closing credits of a movie and marveled at how many people it took to make it? Amy Edmondson has been researching such a process in a variety of industries and venues — including going to Disney to study how 900+ people, in ever-shifting clusters, produced one animated film. She calls it “teaming,” or teamwork on the fly. Teaming is not the same as teamwork, which consists of stable groups who have the benefits of practice and experience with one another, like your local sports team. It’s more about the constantly changing configurations that form around one project, then another, to respond to challenges in the moment — and it’s the way more and more of us have to work, Edmondson says. She recalls the 2010 rescue of Chilean copper miners as a case study of the power of teaming: it required hundreds of people, including mining engineers, NASA scientists, Chilean special forces troops and volunteers from around the world to work across sectors and borders for nearly 70 days. Similarly, problems like climate change and water scarcity are too colossal to be solved by any one company or sector, Edmondson says. So what are the factors behind successful teaming? Humility, curiosity about what others can offer, willingness to take risks and learn quickly, and the psychological safety to give your best. “Look to your left, look to your right,” she asks the audience. “How quickly can you find the unique skills, talents and hopes of your neighbors, and how quickly can you convey what you can bring?” 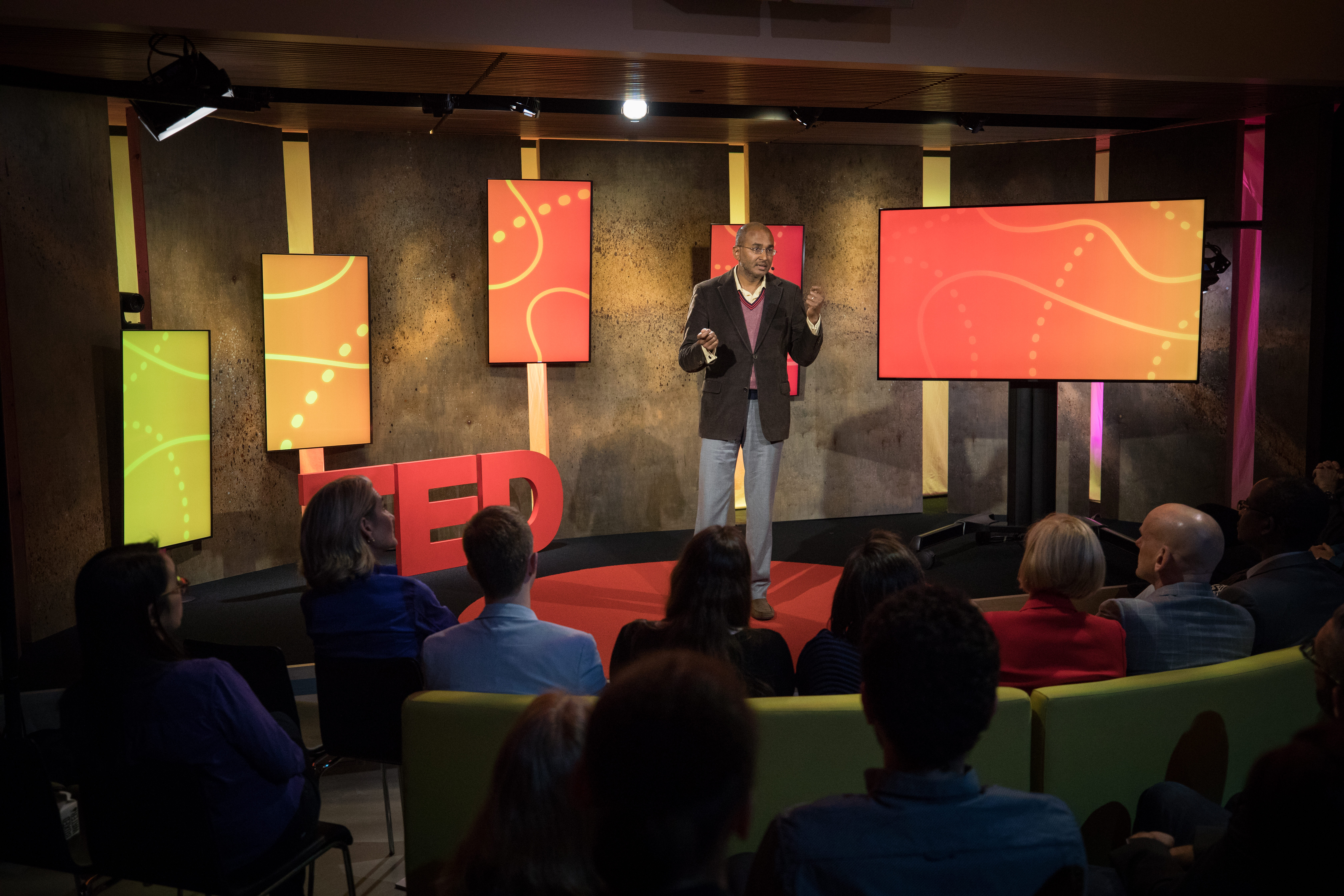 Is capitalism an ideology or an operating system? Author Bhu Srinivasan discusses the past and future of the free market — and how it might change as our technology changes. (Photo: Ryan Lash / TED)

Upgrading the operating system of capitalism. Author Bhu Srinivasan researches the intersection between capitalism and technological progress. Capitalism is a loaded term, he says: it’s either revered or reviled. But this is a misunderstanding — instead of thinking about capitalism as an ideology, we should think about it as an operating system that needs upgrades to keep up with innovation. Think, for example, about how property rights had to keep up with airplanes in the 19th century — for the first time, we had to decide who owns the sky, not just the land. And that evolution is still ongoing, Srinivasan says, with the impending take-off of drone delivery services. When you think of capitalism as a firm, unchanging ideology, keeping up with innovation becomes much harder; well-meaning politics can stifle progress and make for bad policy. To this point, Srinivasan sees a coming identity crisis for the United States’ version of capitalism: As China grows into the world’s most valuable economy, the association between free markets and free press, religion and speech will become decoupled. “We might find that democracy, the multitude of voices, actually impedes capitalism, because [non-democratic] state can very quickly mandate a regulatory framework for drones, for electric cars … for any new innovation where they feel that they can leapfrog Western societies.” To stay nimble in the face of innovation, policymakers should decouple ideology from economics, he suggests, and think about how good policy can become good politics. 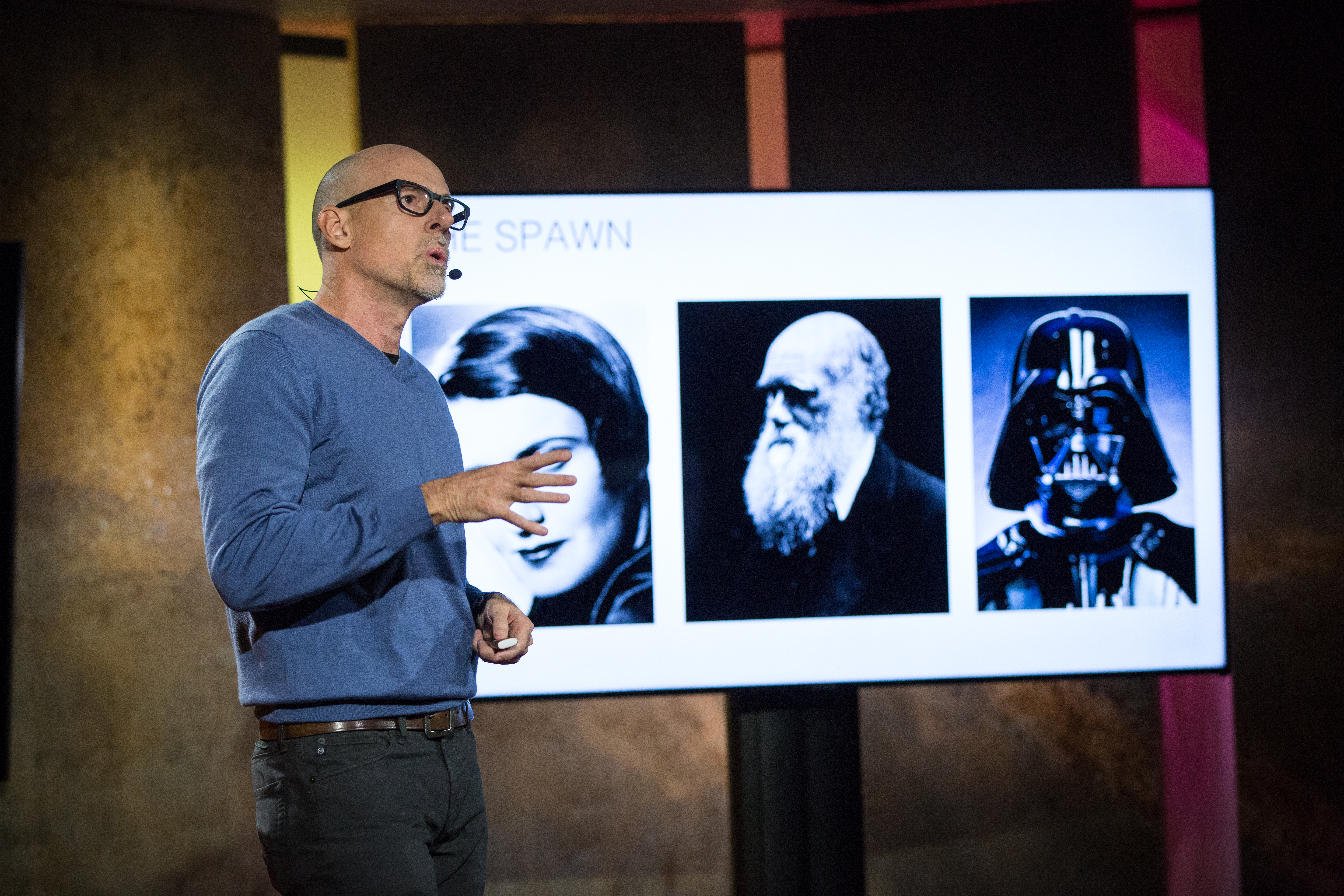 Marketing professor Scott Galloway talks about the current state of some of the world’s biggest, most influential companies — and what we should do about it. (Photo: Ryan Lash / TED)

God, love, consumption and sex. In that order, NYU clinical professor of marketing Scott Galloway makes reference to the four deities of modern life: Google, Facebook, Amazon and Apple. “We have become totally out of control with the gross idolatry of innovation and of youth,” he says. “We no longer worship the character of kindness, but of innovation and people who create shareholder value.” In a provocative, frank and at times bombastic talk, Galloway rips away the veil of integrity and good intention that shroud these companies from their fiscal obligations, such as paying their fair share in taxes. With passion and fervor, he asks the audience to wake up from their faux-comfort in the arms of these corporations and understand that this power is not being wielded with responsibility. After the talk, TED’s curator Chris Anderson ushers Galloway back onstage for an impromptu Q&A. Is there a more nuanced view, he asks, in which these companies’ influence might be seen as a force for good? Galloway agrees there are principled people within each of the four companies he he’s targeting, but that the sheer size and ambition of these companies requires a sharp look by all of us.

Be patient with your dreams. In a welcome musical interlude, musician Rei rocks the stage. Playing “My Mama” and “Black Banana,” she blends her Japanese roots with classic American blues, mixed with a touch of indie rock and pop. “Commitment will always be rewarded just like fruit ripens when the time is right,” she says.

A school that cultivates aha! moments. In 1988, Matt Goldman and a few friends created the Blue Man Group, an off-Broadway production that became a New York sensation known for its humor, blue body paint and wild stunts — like dipping an audience member in a 70-pound vat of Jell-o. The entire show worked on the premise that certain conditions can make “aha! moments” — moments of surprise and learning (and exuberance) — frequent and intentional rather than random and occasional. Since then, Goldman and his partners have established a school known as the Blue School to apply many of the lessons learned from Blue Man Group to early-childhood education. Goldman describes how he and his partners designed the school to be a place where “community is paramount, collaboration is cherished, creative self-expression is celebrated, and children, teachers and parents together develop a lifelong, joyful passion for learning.” But this dynamic environment isn’t exclusive to the Blue School, he says. We can apply the same principles to our homes, our companies and our communities — with fantastic results: “We can get so much done when the conditions are right.” 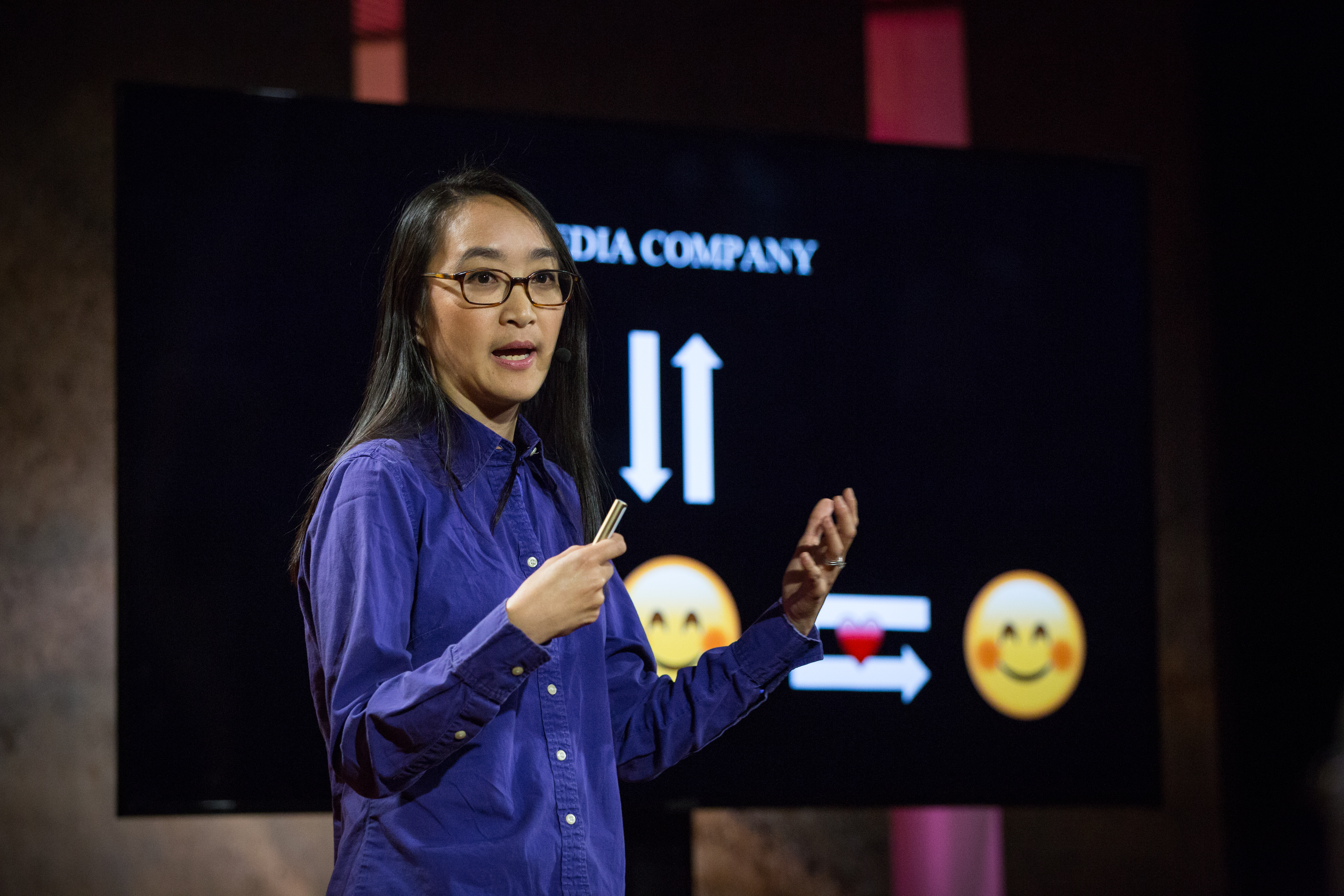 In a fascinating talk about the ubiquitous content on all of our news feeds, Buzzfeed’s Dao Nguyen shares some secrets of going viral. (Photo: Ryan Lash / TED)

The real reason why something goes viral. Last year, Buzzfeed employees decided to prank Ze Frank, president of Buzzfeed Motion Pictures, on his birthday by putting a family of baby goats in his office. They shared the prank online via Facebook Live and more than 90,000 people tuned in to watch. The success of the prank surprised them, says Dao Nguyen, publisher at Buzzfeed, and they set about figuring out why people tuned in. The exploration led them to formalize the idea of cultural cartography: to make something go viral, “don’t just think about the subject matter,” Nguyen says. “Think also about — and in fact primarily about — the job that your content is doing for the reader or the viewer.” This approach completely changes the relationship between media and data, she says. “If we can capture in data what really matters to you, and if we can understand more the role that our work plays in your actual life,” she says, “the better content we can create for you and the better that we can reach you.”