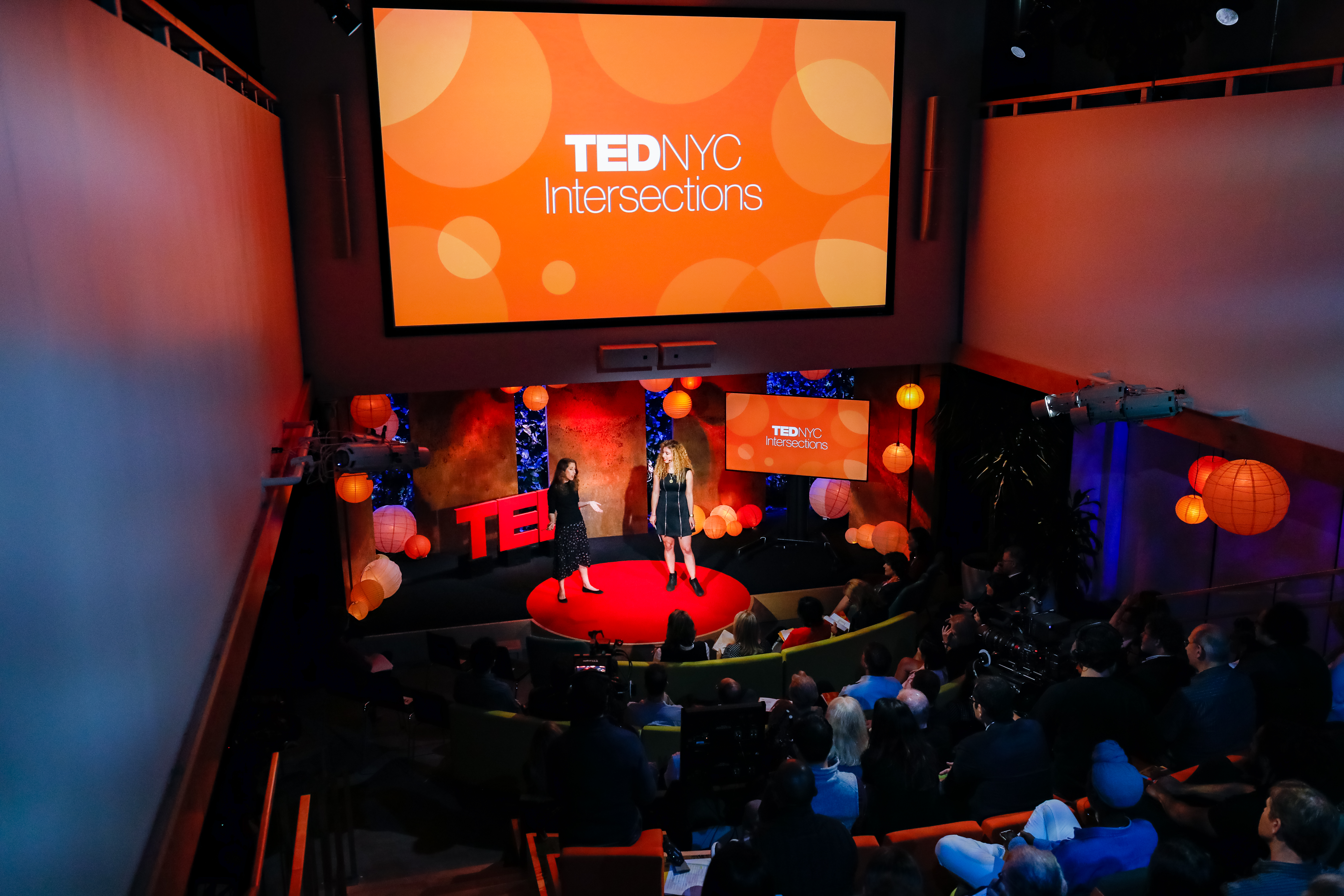 At the intersections where we meet and collaborate, we can pool our collective wisdom to seek solutions to the world’s greatest problems. But true change begs for more than incremental steps and passive reactions — we need to galvanize transformation to create our collective future.

To celebrate the effort of bold thinkers building a better world, TED has partnered with the Brightline Initiative, a noncommercial coalition of organizations dedicated to helping leaders turn ideas into reality. In a night of talks at TED HQ in New York City — hosted by TED’s speaker development director Cloe Shasha and co-curated by business curator Corey Hajim and technology curator Alex Moura — six speakers and two performers showed us how we can effect real change. After opening remarks from Brightline’s Ricardo Vargas, the session kicked off with Stanford professor Tina Seelig. 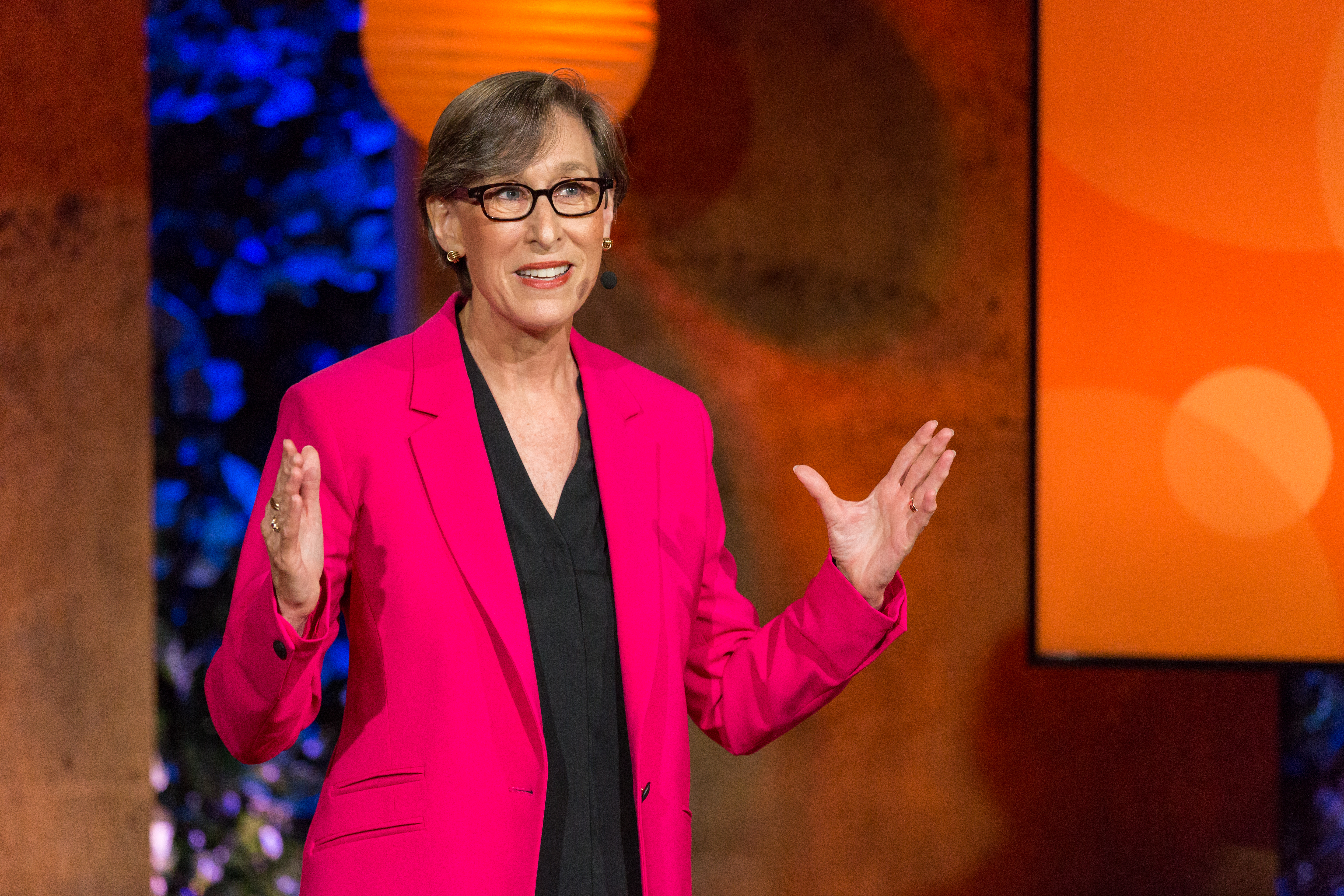 How to cultivate more luck in your life. “Are you ready to get lucky?” asks Tina Seelig, a professor at Stanford University who focuses on creativity, entrepreneurship and innovation. While luck may seem to be brought on by chance alone, it turns out that there are ways you can enhance it — no matter how lucky or unlucky you think you are. Seelig shares three simple ways you can help luck to bend a little more in your direction: Take small risks that bring you outside your comfort zone; find every opportunity to show appreciation when others help you; and find ways to look at bad or crazy ideas with a new perspective. “The winds of luck are always there,” Seelig says, and by using these three tactics, you can build a bigger and bigger sail to catch them.

A new mantra: let’s fail mindfully. We celebrate bold entrepreneurs whose ingenuity led them to success — but how do we treat those who have failed? Leticia Gasca, founder and director of the Failure Institute, thinks we need to change the way we talk about business failure. After the devastating closing of her own startup, Gasca wiped the experience from her résumé and her mind. But she later realized that by hiding her failure, she was missing out on a valuable opportunity to connect. In an effort to embrace failure as an experience to learn from, Gasca co-created the Failure Institute, which includes international Fuck-Up Nights — spaces for vulnerability and connection over shared experiences of failure. Now, she advocates for a more holistic culture around failure. The goal of failing mindfully, Gasca says, is to “be aware of the consequences of the failed business,” and “to be aware of the lessons learned and the responsibility to share those learnings with the world.” This shift in the way we address failure can help make us better entrepreneurs, better people, and yes — better failures. 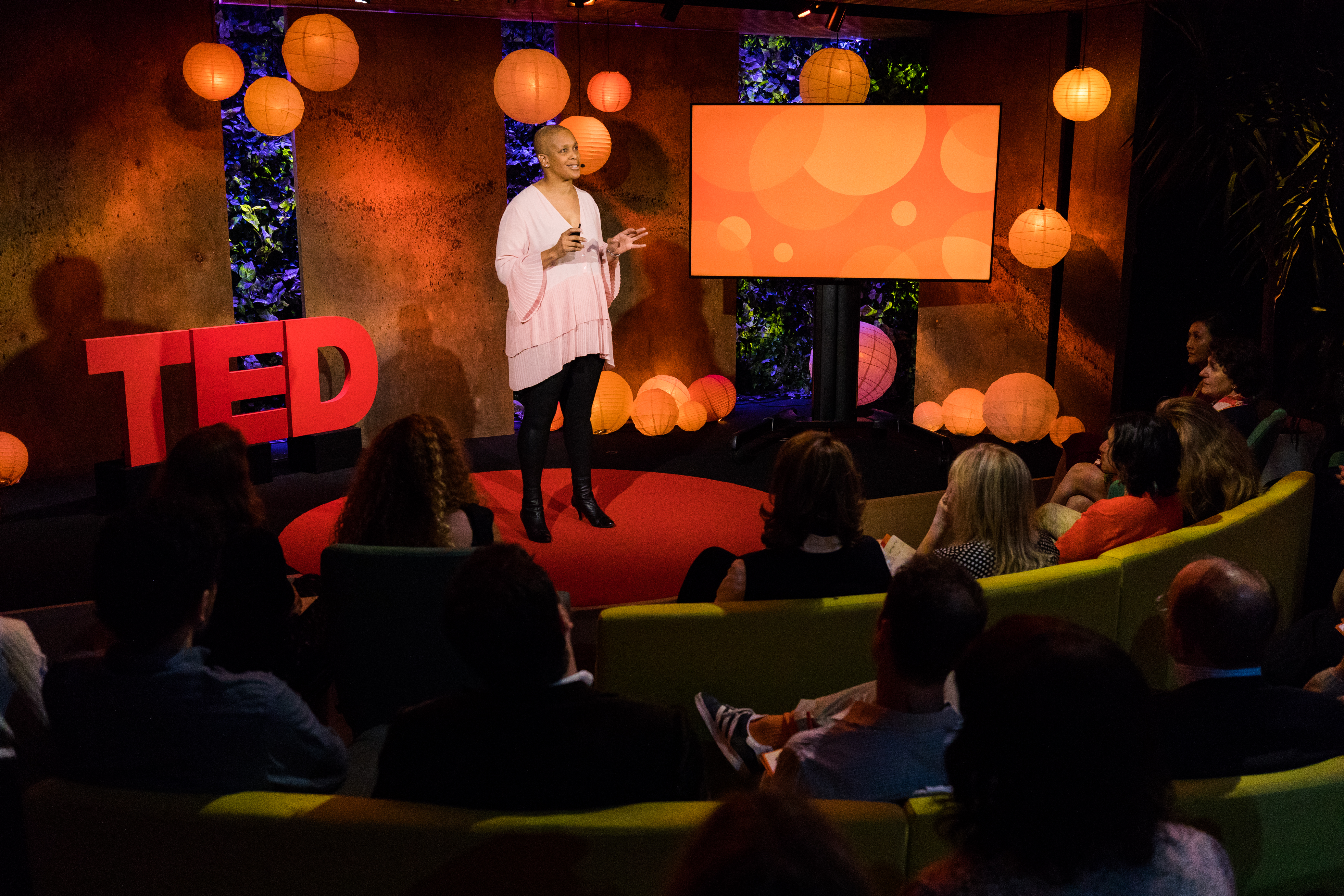 Preserving dignity, guaranteeing justice. We all want to be safe, and our safety is intertwined, says Tracie Keesee, cofounder of the Center for Policing Equity. Sharing lessons she’s learned from 25 years as a police officer, Keesee reflects on the challenges — and opportunities — we all have for creating safer communities together. Policies like “Stop, Question and Frisk” set police and neighborhoods as adversaries, creating alienation, specifically among African Americans; instead, Keesee shares a vision for how the police and the neighborhoods they serve can come together to co-produce public safety. One example: the New York City Police Department’s “Build the Block Program,” which helps community members interact with police officers to share their experiences. The co-production of justice also includes implicit bias training for officers — so they can better understand how this biases we all carry impact their decision-making. By ending the “us vs. them” narrative, Keesee says, we can move forward together.

We can all be influencers. ​Success was once defined by power, but today it’s tied to influence, or “the ability to have an effect on a person or outcome,” says behavioral scientist Jon Levy. It rests on two building blocks: who you’re connected to and how much they trust you. In 2010, Levy created “Influencers” dinners, gathering a dozen high-profile people (who are strangers to each other) at his apartment. But how to get them to trust him and the rest of the group? He asks his guests to cook the meal and clean up. “I had a hunch this was working,” Levy recalls, “when one day I walked into my home and 12-time NBA All-Star Isiah Thomas was washing my dishes, while singer Regina Spektor was making guac with the Science Guy himself, Bill Nye.” From the dinners have emerged friendships, professional relationships and support for social causes. He believes we can cultivate our own spheres of influence at a scale that works for us. “If I can encourage you to do anything, it’s to bring together people you admire,” says Levy. “There’s almost no greater joy in life.” 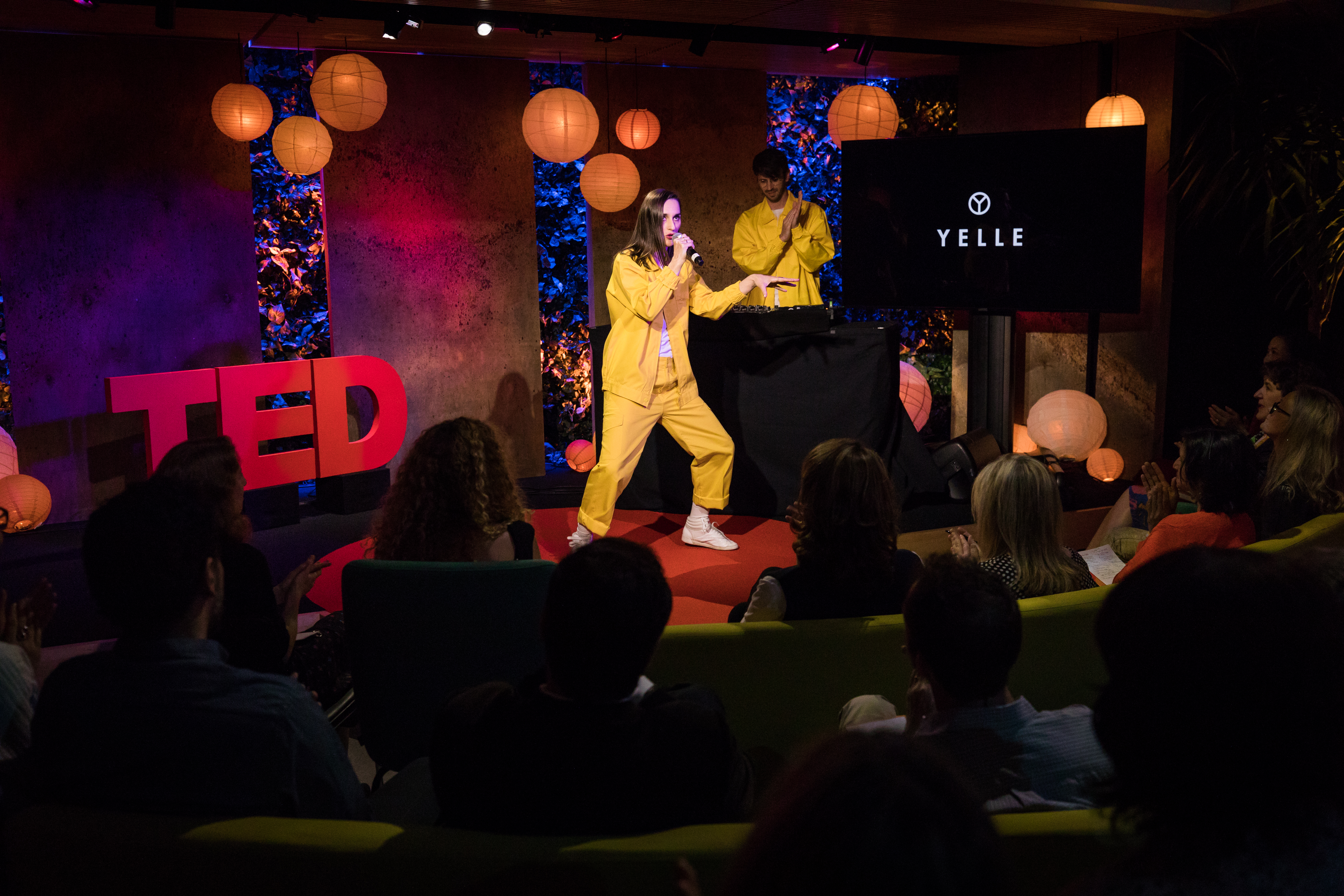 Yelle and GrandMarnier rock the TED stage with electro-pop and a pair of bright yellow jumpsuits. (Photo: Ryan Lash / TED)

The intersection of music and dance. All the way from France, Yelle and GrandMarnier grace the TEDNYC stage with two electro-pop hits, “Interpassion” and “Ba$$in.” Both songs groove with robotic beats, Yelle’s hypnotic voice, kaleidoscopic rhythms and hypersonic sounds that rouse the audience to stand up, let loose and dance in the aisles.

How to be a great ally. We’re taught to believe that working hard leads directly to getting what you deserve — but sadly, this isn’t the case for many people. Gender, race, ethnicity, religion, disability, sexual orientation, class and geography — all of these can affect our opportunities for success, says writer and advocate Melinda Epler, and it’s up to all of us to do better as allies. She shares three simple ways to start uplifting others in the workplace: do no harm (listen, apologize for mistakes and never stop learning); advocate for underrepresented people in small ways (intervene if you see them being interrupted); and change the trajectory of a life by mentoring or sponsoring someone through their career. “There is no magic wand that corrects diversity and inclusion,” Epler says. “Change happens one person at a time, one act at a time, one word at a time.” 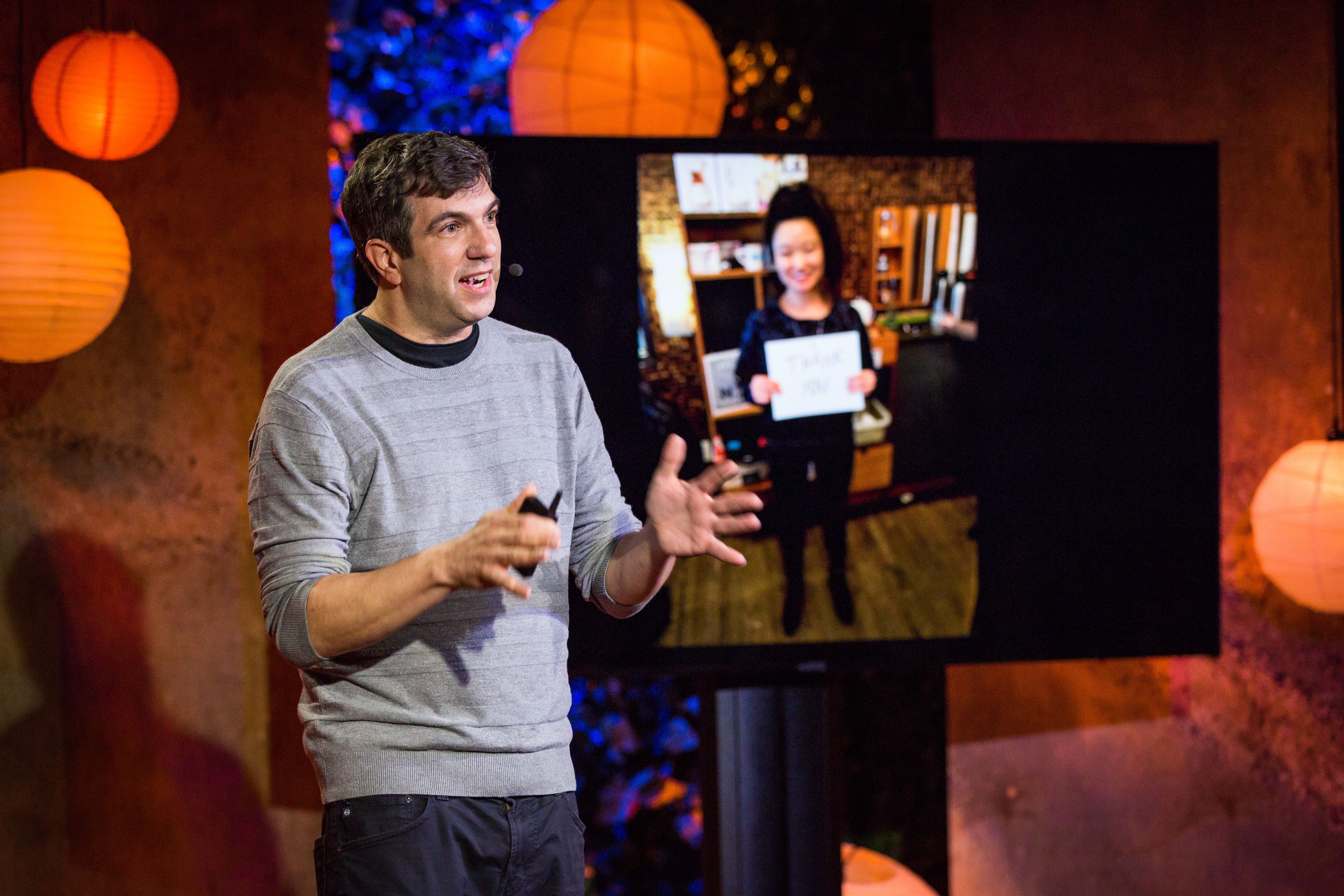 AJ Jacobs explains the powerful benefits of gratitude — and takes us on his quest to thank everyone who made his morning cup of coffee. (Photo: Ryan Lash / TED)

Lessons from the Trail of Gratitude. Author AJ Jacobs embarked on a quest with a deceptively simple idea at its heart: to personally thank every person who helped make his morning cup of coffee. “This quest took me around the world,” Jacobs says. “I discovered that my coffee would not be possible without hundreds of people I take for granted.” His project was inspired by a desire to overcome the brain’s innate “negative bias” — the psychological tendency to focus on the bad over the good — which is most effectively combated with gratitude. Jacobs ended up thanking everyone from his barista and the inventor of his coffee cup lid to the Colombian farmers who grew the coffee beans and the steelworkers in Indiana who made their pickup truck — and more than a thousand others in between. Along the way, he learned a series of perspective-altering lessons about globalization, the importance of human connection and more, which are detailed in his new TED Book, Thanks a Thousand: A Gratitude Journey. “It allowed me to focus on the hundreds of things that go right every day, as opposed to the three or four that go wrong,” Jacobs says of his project. “And it reminded me of the astounding interconnectedness of our world.”