We depend on each other, and we can accomplish very little if we can’t work together. What better way is there to spend our time than with each other?

Hosted by journalists (and married couple) Courtney E. Martin and John Cary, Session 2 of TEDWomen 2016 featured five pairs of speakers and one performer exploring the time we share together. The pairs discovered that transcendence begins with a bond — and no small amount of humility.

Keep me safe, and I’ll keep you wild. Tiq Milan and Kim Katrin Milan married three months after meeting on Facebook, and they fall more in love with each other every day. As members of the LGBTQIA+ community, Tiq and Kim identify their relationship as one built upon a new language of love that transcends rigid traditional institutions and the gender binary. Through their activism and living life out loud, Tiq and Kim’s vision of love and inclusion as revolutionary change has created a space for others to grow into their authentic selves. “We want to make maps to the future, not monuments to ourselves,” says Kim. “Creating a world where love belongs to us all.” 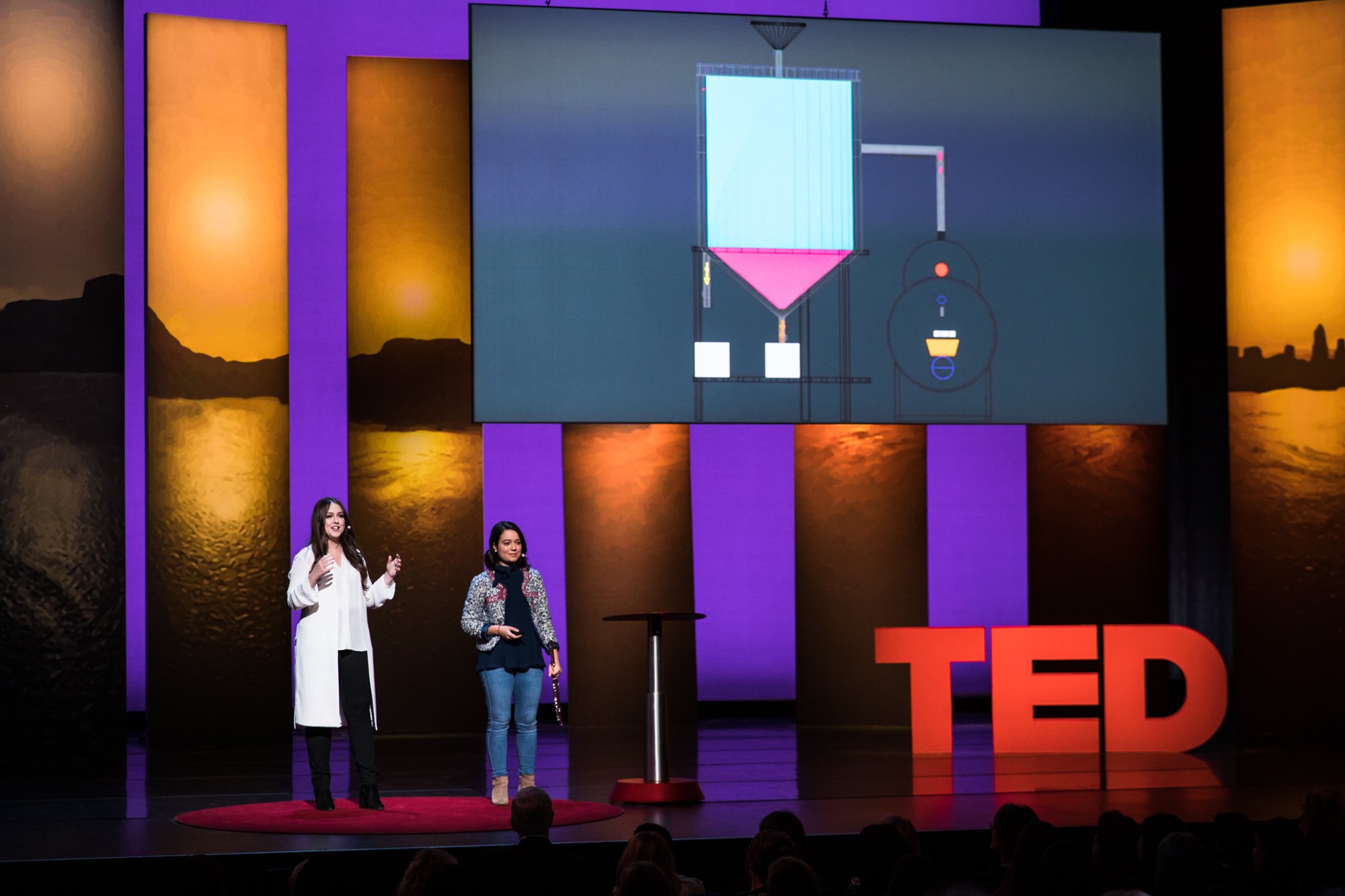 Finding alternative energy through … chicken feathers? As demand for energy and concerns about pollution continue to rise, scientists have struggled with the problem of how to address our energy needs in an environmentally conscious way. For scientists in countries with smaller economies — such as Anela Arifi and Ilda Ismaili, who hail from from Bosnia and Herzegovina — cost-effectiveness is a huge issue as well. Bosnia and Herzegovina discards approximately 4 billion pounds of poultry waste annually, so, Arifi and Ismaili thought, why not use chicken feathers and chicken fat for fuel? Creating a two-stage reactor with an afterburner chamber designed from the basic structure of a flute, the two scientists, students at the International High School of Tuzla and Secondary Music School in Tuzla, produced a biodiesel and hydrogen storage material far superior to samples from other systems. As a result of their efforts, both were chosen to be among 20 global finalists for the 2015 Google Science Fair. “Coming from such a small country and having all these struggles just to be given an opportunity to invent and show it to the world was the best award Google Science Fair could have given us,” Arifi says.

“We can’t walk in each other’s shoes, but we can walk together.” How did Kennedy Odede and Jessica Posner Odede, two individuals who grew up in vastly different parts of the world and under dramatically different circumstances, find each other and partner to fight poverty and sexual violence in Kibera, Nairobi’s largest slum? Their answer: forgiveness. Narrating their journey from strangers to a married couple with humor, sweetness and wisdom, the duo walks us through the three stages of forgiveness: tolerance, forgetting and release. “Forgiveness doesn’t erase the past, it enriches the future,” Kennedy says as the couple reflect on how forgiveness creates space for new worldviews and opportunities. In their case, that space led them to walk together in building Shining Hope for Communities, a youth-empowerment group dedicated to fighting poverty.

We are two of a kind. Inspired by her activism and work with teenagers in conflict zones, singer-songwriter Morley uses the transcending power of music for social justice. Protest and social justice music, Morley says, allows one to understand the condition people are coming from — an idea drawn from Morley’s mentor Dr. Bernice Johnson Reagon. Alongside cellist Marika Hughes, Morley performs “Two of a Kind: at TEDWomen, a wistful song about the global addiction to ‘othering’ each other and the ability of love to help us rise above our differences. 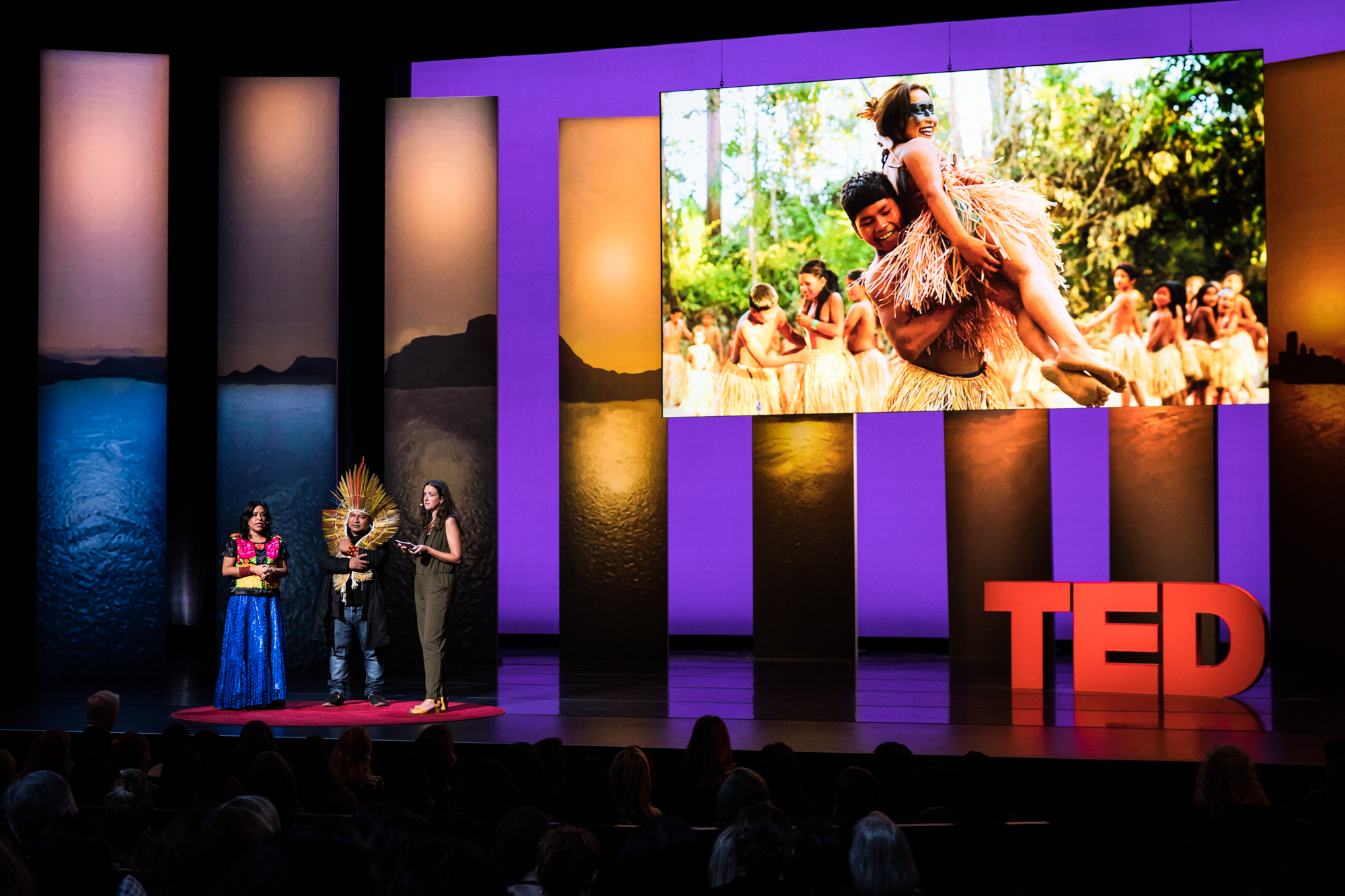 Transformation through preservation. Chief Tashka Yawanawá, of the Yawanawá people from the Acre region of Brazil, stands up for the self-determination of all indigenous peoples. His wife, Laura Soriano Yawanawá, a Mixteca-Zapoteca activist from Oaxaca, Mexico, has always had an uncompromising belief in equality and inclusion. Together, the two are working to strengthen indigenous traditions at home and around the globe, while rejecting firmly rooted patriarchal systems. They’re developing programs that empower women, children and elders — like a fashion line that uses traditional Yawanawá designs on clothes and provides female artisans with a stable income. 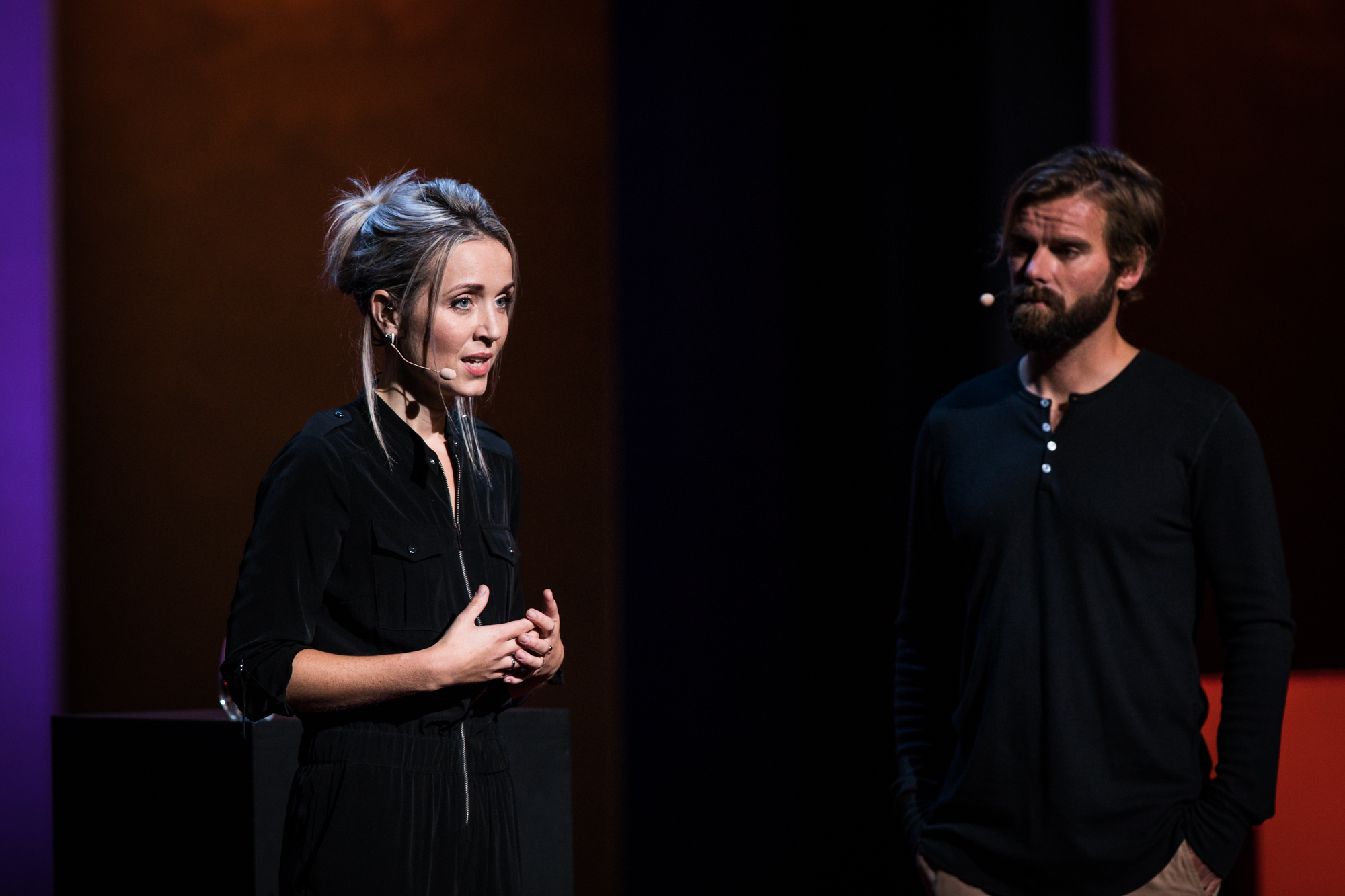 Forgiveness doesn’t change the past, but it does enlarge the future. When Tom Stranger was 18 years old, he went on an international exchange program from his native Australia to Iceland. There he met Thordis Elva, and the two soon were engaged in a teenage romance. A month into their relationship, Elva tried drinking rum for the first time at their school’s Christmas Ball and became ill. What happened next changed her life forever. “Tom acted as my knight in shining armor and told the security guards he’d take me home,” Elva recounts. “It was like a fairy tale, his strong arms around me, laying me in the safety of my bed. But the gratitude I felt soon turned to horror, as he proceeded to take my clothes off and get on top of me.” Despite limping for days and crying for weeks, the incident didn’t fit Elva’s ideas about rape, and by the time she could identify what had happened to her as rape, Stranger had completed his exchange program and left for Australia. Nine years later, her self-worth buried under a soul-crushing load of silence and nearing a nervous breakdown, Elva watched in wonder as words streamed out of her pen into her notebook, forming the most pivotal letter she’d ever written, addressed to Stranger. “Regardless of whether he deserved my forgiveness, I deserved peace. My era of shame was over.” This marked the start of an eight-year-long correspondence — in which Elva relieved the burden she’d wrongfully shouldered and Stranger, in turn, owned up to what he’d done — that culminated in a face-to-face meeting in South Africa. “Saying to Thordis that I raped her changed my accord with myself,” Stranger says. “Most importantly, the blame transferred from Thordis, to me.” Elva and Stranger have co-authored a book, South of Forgiveness, due out next year, which they hope can be useful to people from both ends of the perpetrator-survivor scale. “We owe it to each other to join our efforts in curing the epidemic that is sexual violence,” Elva says. “Just imagine all the suffering we could eliminate if we dared to face this issue — together.” 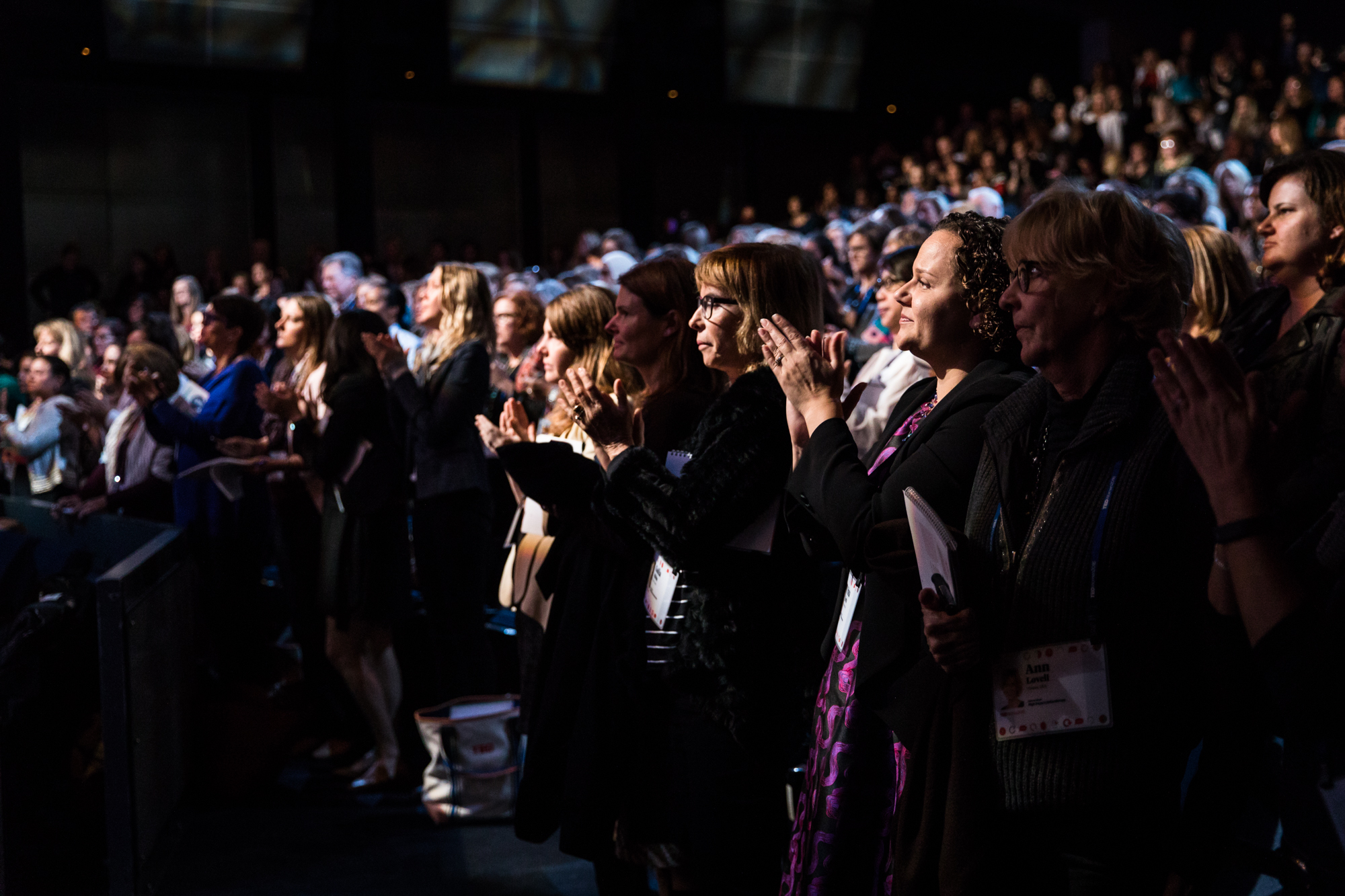