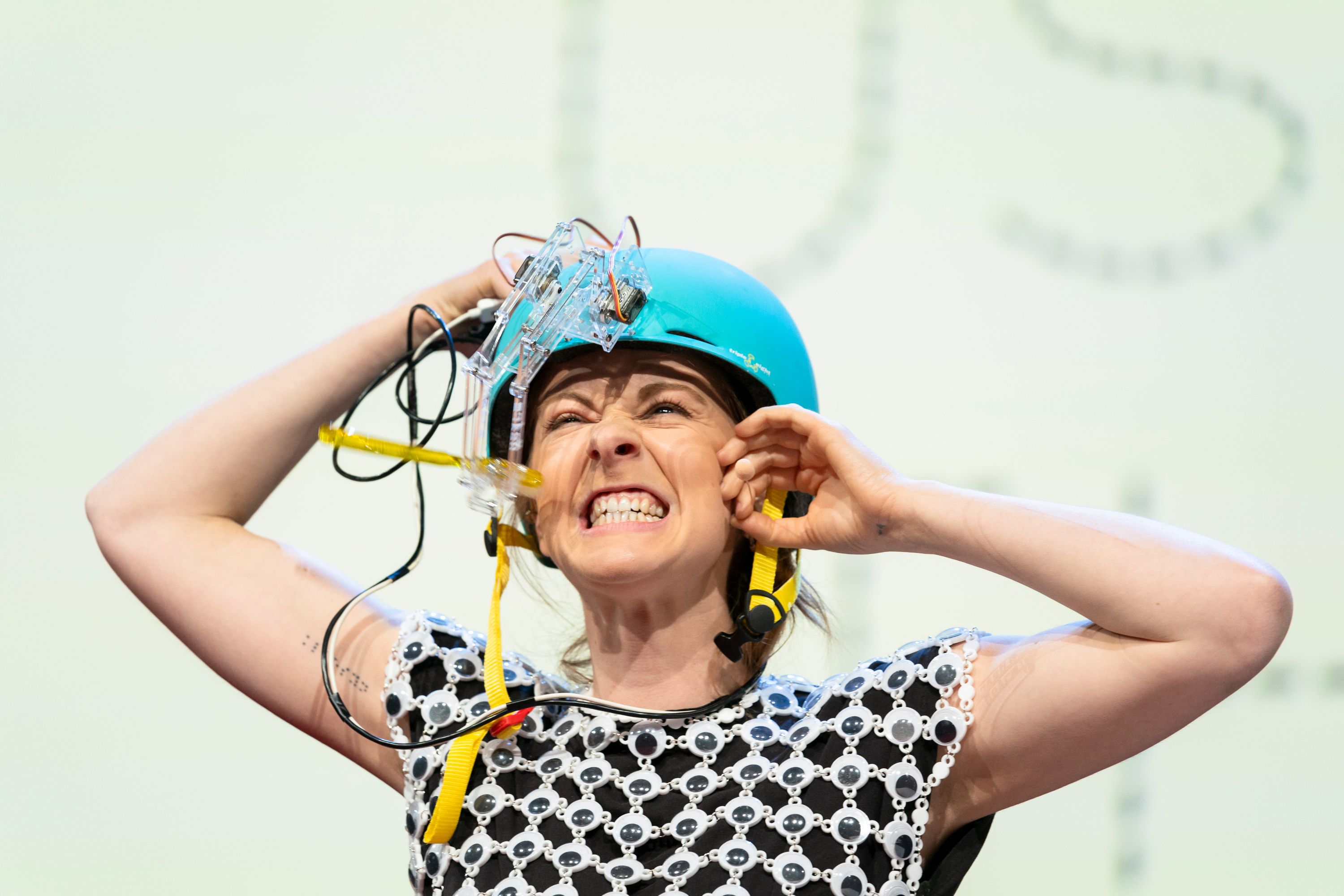 The Queen of Shitty Robots, Simone Giertz, demonstrates one of her deliciously daffy creations — a toothbrushing helmet — in Session 3 of TED2018: The Age of Amazement, April 11, 2018, in Vancouver. And yes, her shirt is made of googley eyes. Photo: Bret Hartman / TED

For the Session 3 of the conference, TED Head of Curation Helen Walters says, “We’re throwing off all pretense of cool.” Seven speakers are queued up to discuss the latest advances in their fields of technology. And while the gadgets do all different things, they share one crucial function: the power to make jaws drop. 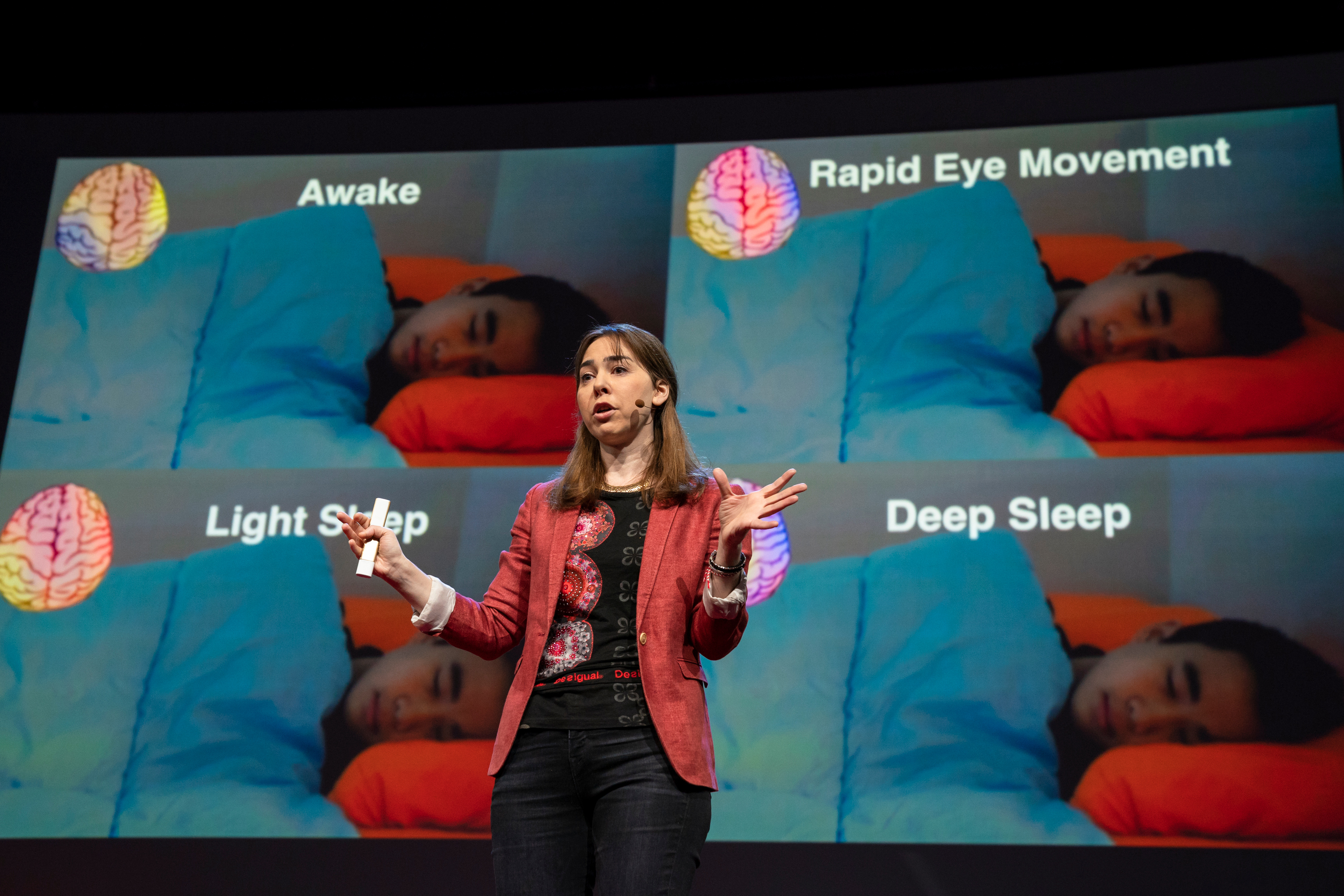 How wireless signals could revolutionize healthcare. Growing up, technologist Dina Katabi was fascinated by Star Wars — and specifically, the Force. Later, the MIT professor realized that wireless signals are kind of like the Force — they can travel through space, they bounce off walls, and they reflect off human bodies. Which got her thinking: “If I had a device that could sense these minute reflections, I would be able to feel people I could not see.” She turned her musings into a flat, iPad-sized device that can use wireless signals to detect all sorts of things about a person, such as our movements, breathing, heartbeat, and even our sleep — all without wearables. To demonstrate, Katabi called an assistant onto the stage and asked him to breathe. On screen, the audience could see a line perfectly charting his inhales and exhales, as well as his heartbeat. This type of device could transform healthcare, she suggests: “If we can monitor chronic disease patients in their home, we can detect changes in their breathing, heartbeat, mobility, sleep, and we can detect emergencies before they occur and have a doctor intervene earlier so that we can avoid hospitalization.” Katabi’s team is now partnering with multiple hospitals to use the device with patients who have various chronic diseases. In a brief Q&A, Walters asks the researcher how we could prevent her work from being used for more insidious applications. Technology already exists that could be integrated to prevent people from being monitored without their consent, explains Katabi, and and policy will also play an important role. “Hopefully, with the two of them, we can control any issues,” she says. 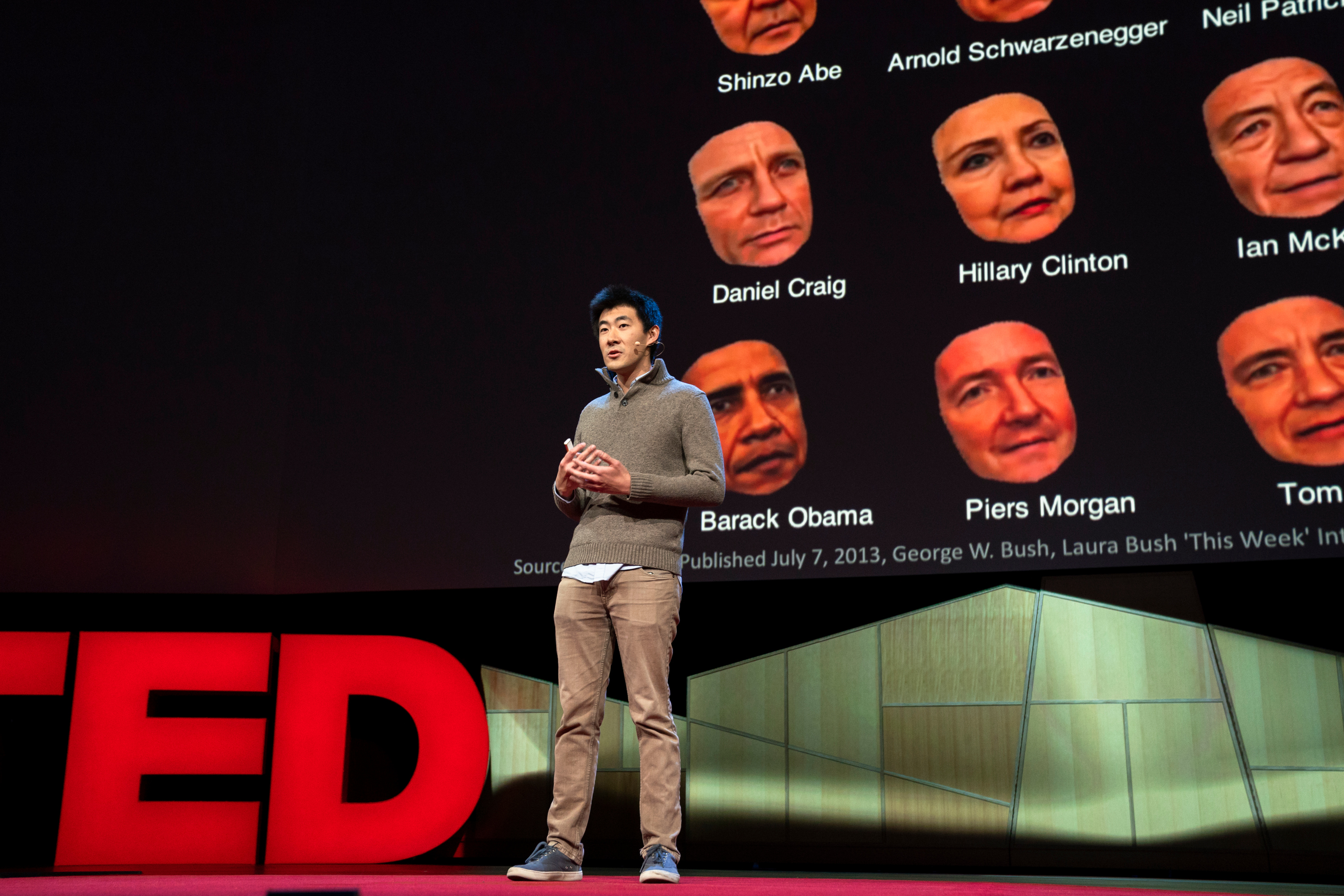 Tech that brings us face-to-face with our deepest fears. Imagine watching an interview with your favorite actor, only to discover later that everything — their expression, their words, the wrinkles on their face — was fake, a product of sophisticated algorithms. Researching this kind of work is the specialty of computer scientist Supasorn Suwajanakorn, who developed software that can create ultra-convincing digital fakes while at the University of Washington. The process he uses to construct these simulations is, unsurprisingly, extremely complex. An algorithm crunches huge sets of visual data (both photos and video) in order to generate a 3D moving model; then small, believable details like subtle mannerisms and expressions are blended in to reconstruct a talking head in unsettlingly accurate detail. Suwajanakorn is all too aware of how easily this technology could be used to manipulate the unaware or gullible on the Internet, so he is joining forces with others in his field to safeguard us against the same work he created. 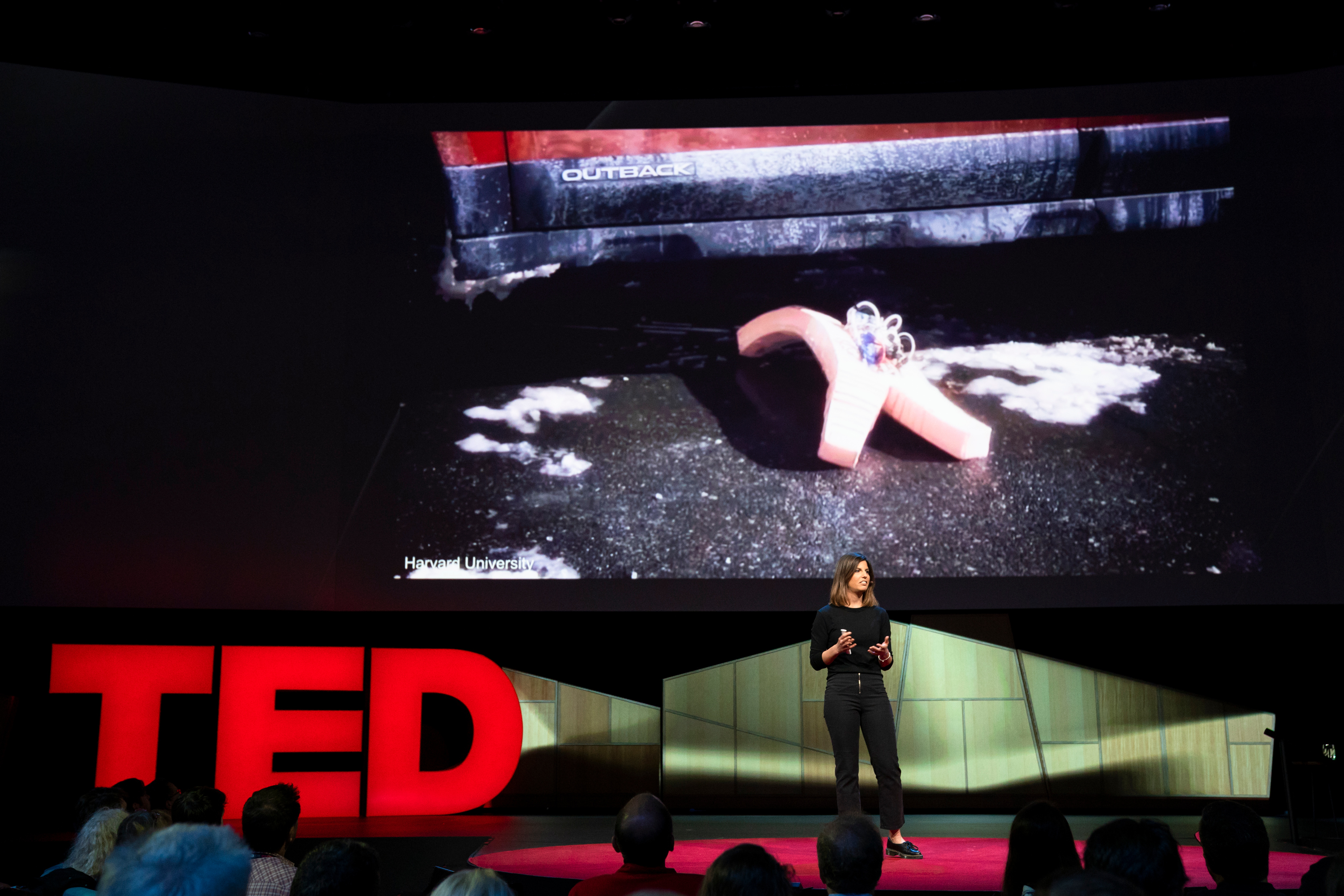 Cutting-edge robots … with no edges. For years, robots have been designed for speed and precision, but their rigidity has limited the situations they can be used in. How could we create robots that can better fit into the real world? “We can look to nature,” says Stanford University biomedical engineer Giada Gerboni. Consider the octopus. The cephalopod has no bones and no stiff structures, allowing it to adapt to a huge variety of situations and its tentacles to move in countless ways. This is “embodied intelligence, a kind of intelligence that all living organisms have,” as Gerboni puts it. The emerging field of soft robotics aims to use embodied intelligence to make robots more flexible, nimble and safe to use. Researchers are using pliant materials to build the robots’ bodies and distribute their actuators — the mechanisms responsible for the movement of the machines — across the body, instead of only at joints, allowing for much more range of motion. Soft robots hold great promise for surgery and medicine, since most traditional robots are too stiff to be trusted in as sensitive an environment as the human body. Gerboni herself is now working on “robotic needle steering” — a flexible needle that could be used on minimally invasive procedures. And while researchers are still many years away from replicating an octopus’s graceful moves in machine form, they’re rapidly approaching the day that soft robots can play a role in helping us in our daily lives.

The beauty of building useless things. As all seven-year-olds know, brushing your teeth is boring. (That’s why it’s called a chore.) So, in 2015, Simone Giertz decided to make a robot that could brush her teeth. Then she filmed a seven-second clip showing her tooth-brushing helmet in action and posted it online. Since then, Giertz has become the unofficial Queen of Shitty Robots, with a YouTube channel dedicated to her wonderfully wacky creations. She has made robots that chop vegetables, robots that wake her up, robots that cut hair, and even robots that apply your lipstick. Her inventions rarely succeed, if ever, in accomplishing their tasks. What drives her to build such hapless robots? “The true beauty of making useless things,” according to Giertz, is “acknowledging you don’t always know what the best answer is, and it turns off that voice in your head that tells you that you know exactly how the world works. And maybe a toothbrush helmet isn’t the answer, but at least you’re asking the question.” 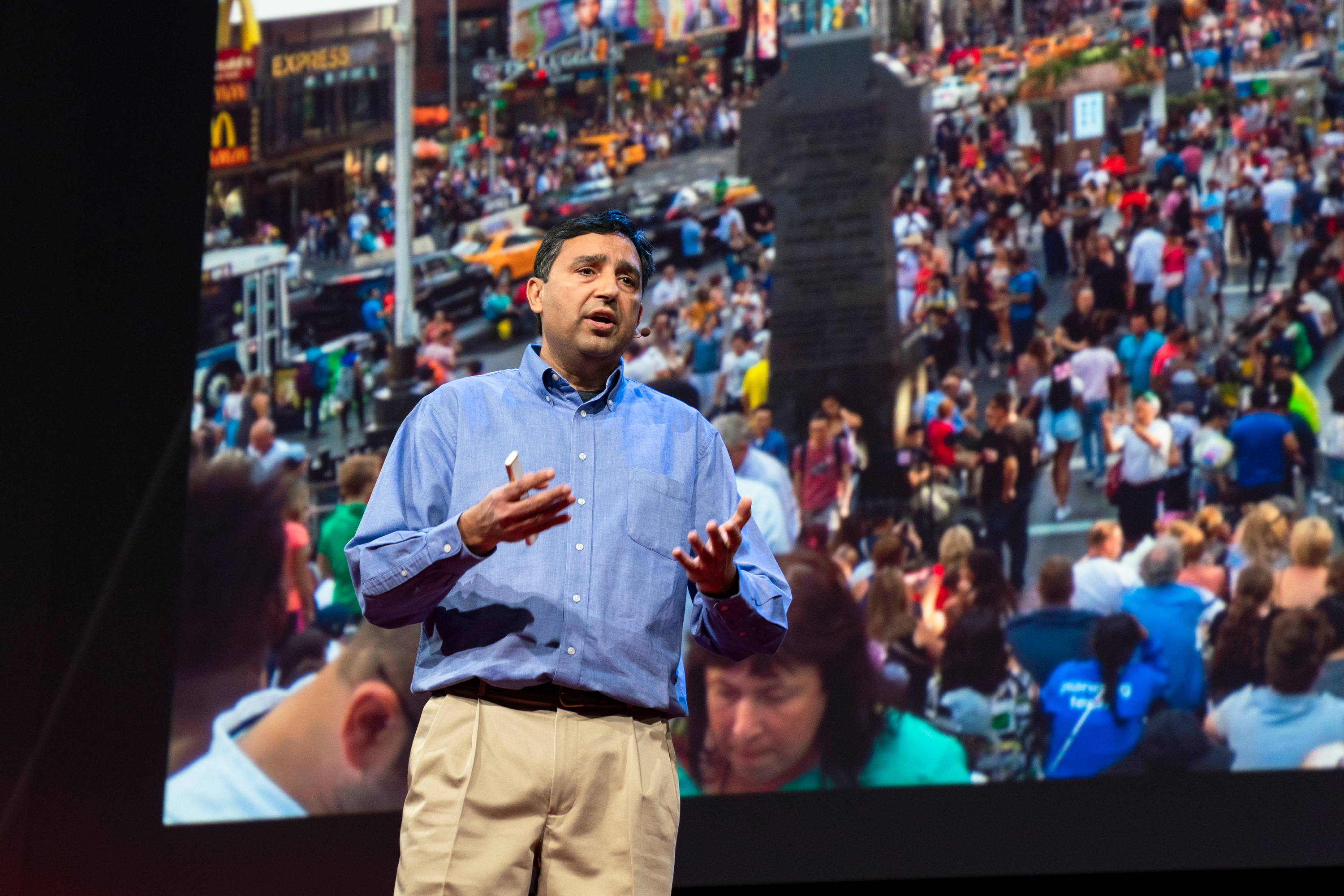 The hyper-detailed photo behind Rajiv Laroia was not taken with a high-end professional camera — but with a smartphone-sized camera that combines 16 individual cameras to capture complex images into 52-megapixel photos. Photo: Bret Hartman / TED

A pocket-sized camera that captures the world. Engineer Rajiv Laroia, who invented much of the technology behind the LTE 4G wireless standard, shows the audience a magnificently detailed photo of Times Square in New York City, zooming in on different features — a streetside Minnie Mouse, his wife, even the time on someone’s wristwatch. Then he pulls a small device from his pocket — it’s the camera he used to take the image. His mighty mini-machine, which he calls the L16, has 16 individual cameras that simultaneously capture the scene, and Laroia says its “real magic” are its sophisticated computational and machine learning algorithms, which fuse all of the images together into a single 52-megapixel photo. Thanks to its software and multiple lenses, the camera can deliver photos that are three-dimensional in their depth perception. Cameras like the L16 offer exciting opportunities in fields like self-driving vehicles, healthcare, security, VR and retail. “But photography isn’t interesting just because of the technology — it’s about what you can uncover about the world,” says Laroia. 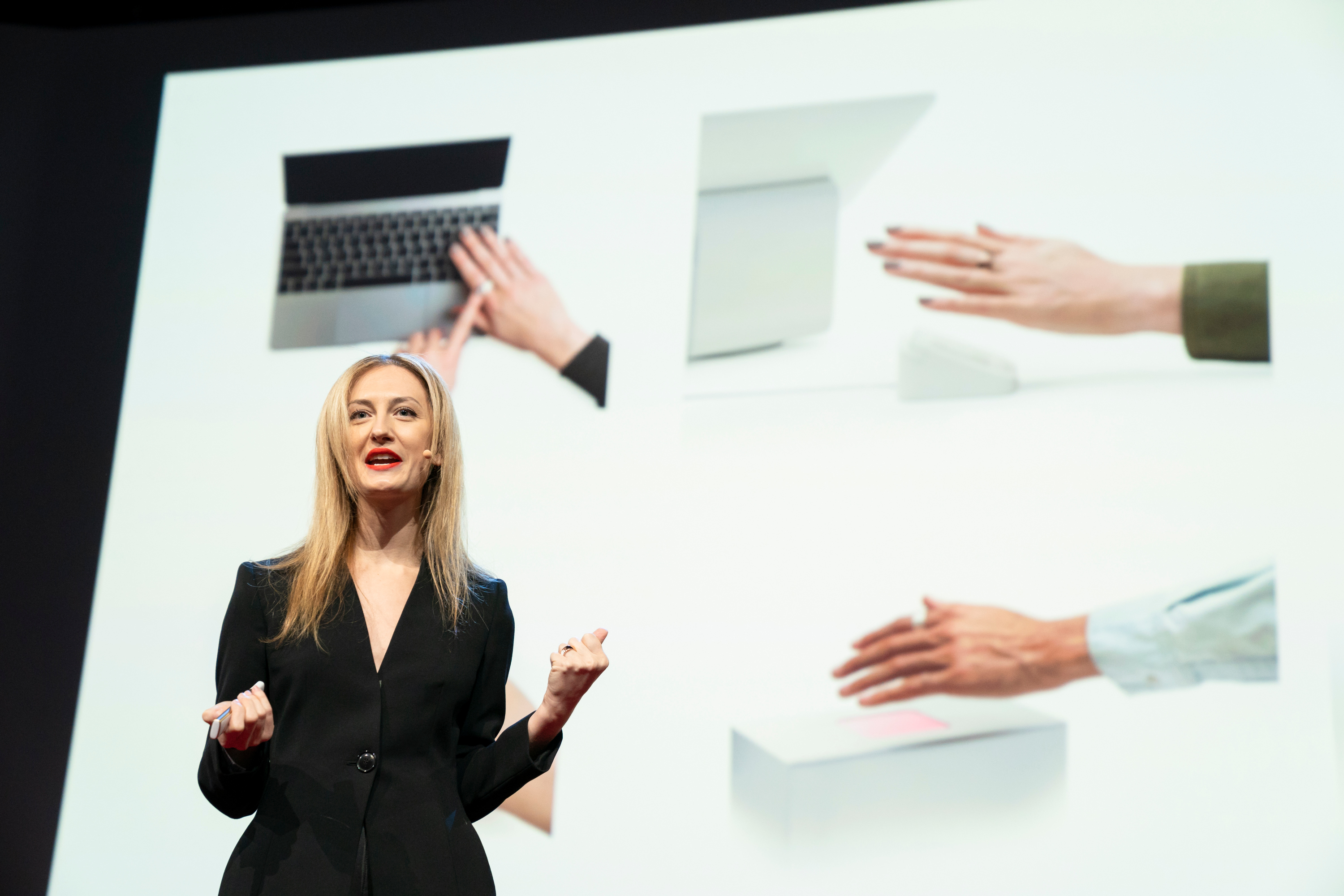 The hands on the slide behind Melanie Shapiro are wearing the Token ring, which stores your personal data (including ID and credit card info) and lets you use it safely in many ways. Photo: Bret Hartman / TED

Solving the hard problem of human ID. Have you ever been hacked? If so, you’ve heard people make the same-old suggestions to you. “Change your password again! Turn on two-factor authentication! But these are band-aids, and they distract us from the real problems we’re facing,” says technology entrepreneur Melanie Shapiro. “The issue is, in our digital systems, individual computers are very easy to identify — but individual humans aren’t.” That’s why many of us carry around multiple identity tokens — credit cards, ID cards, house keys, office swipe cards, and passwords (multiple passwords, please).The end result: “We have weak standards for our own identity, and it’s eroding the ability for us to trust each other, the systems that we’re using and the companies we interact with.” Shapiro’s solution is a product called Token, a sleek wearable ring that holds all of a person’s identity data in one place. She shows a compelling demo video of users tapping their rings against laptops to log in, against cars to open the door and start the engine, and against subway turnstiles and grocery store scanners to pay. Could the answer to our ID problem lie in the same technology ancient Romans used — a signet ring? 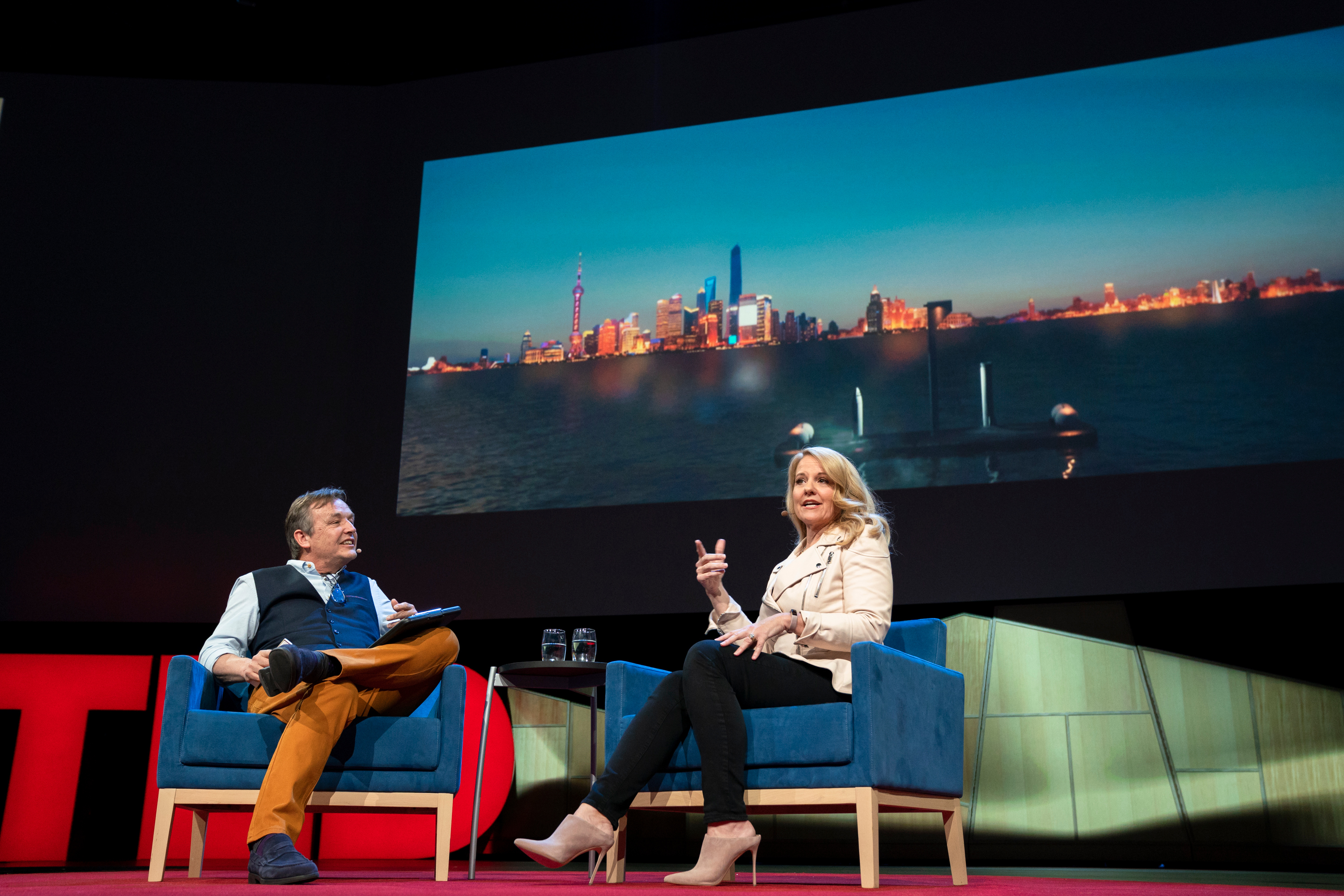 Host Chris Anderson, left, speaks with Gwynne Shotwell, the president of SpaceX. On the slide behind her, a proposal for a rocket-powered mode of travel. Imagine blasting off from Vancouver and being in Bahrain in 40 minutes. And as Shotwell says: It’s definitely going to happen.” Photo: Bret Hartman / TED

Fundamental risk reduction for humanity. Gwynne Shotwell has one of the most amazing jobs on the planet — she was employee #7 at SpaceX and is now the company’s president. In conversation with TED curator Chris Anderson, Shotwell discusses what inspired her to pursue a career in engineering, how she drove SpaceX’s partnership with NASA, the company’s race to be the next company to put people into orbit and what it’s like to work with Elon Musk — including the concept of “Elon time.” After discussing SpaceX’s design process, including their reusable rockets (something no national space program has been able to achieve) as well as a semi-secretive project to put a constellation of satellites into low-Earth orbit to cover the planet in internet (at an estimated cost of $10 billion), Shotwell took some time to dream a little. She detailed SpaceX’s next big project: the BFR, or Big Falcon Rocket — which will be about two-and-a-half times the size of Falcon Heavy, the giant rocket they flew earlier this year (the one that delivered a Tesla roadster to space). BFR is what you need to take humanity to Mars, for sure — but it has a “residual capability,” as Gywnne puts it: rocket travel here on Earth. The plan is to fly BFR like an aircraft, doing point-to-point travel, taking off from New York City or Vancouver and flying halfway across the globe in roughly 40 minutes. Anderson says incredulously: “This is never going to happen!” and Gwynne shoots back:  “Oh no, it’s definitely going to happen” — and within a decade. The timeframe for landing humans on Mars looks about the same, she says, since both projects are built on the same technology. And to the question of why, with all the problems here on earth, SpaceX has their eyes on the stars, Shotwell has a vision: “This is the first step to us moving to other solar systems and potentially other galaxies,” she says. “This is the only time I out-vision Elon: I want to meet people, or whatever they call themselves, in another solar system.”