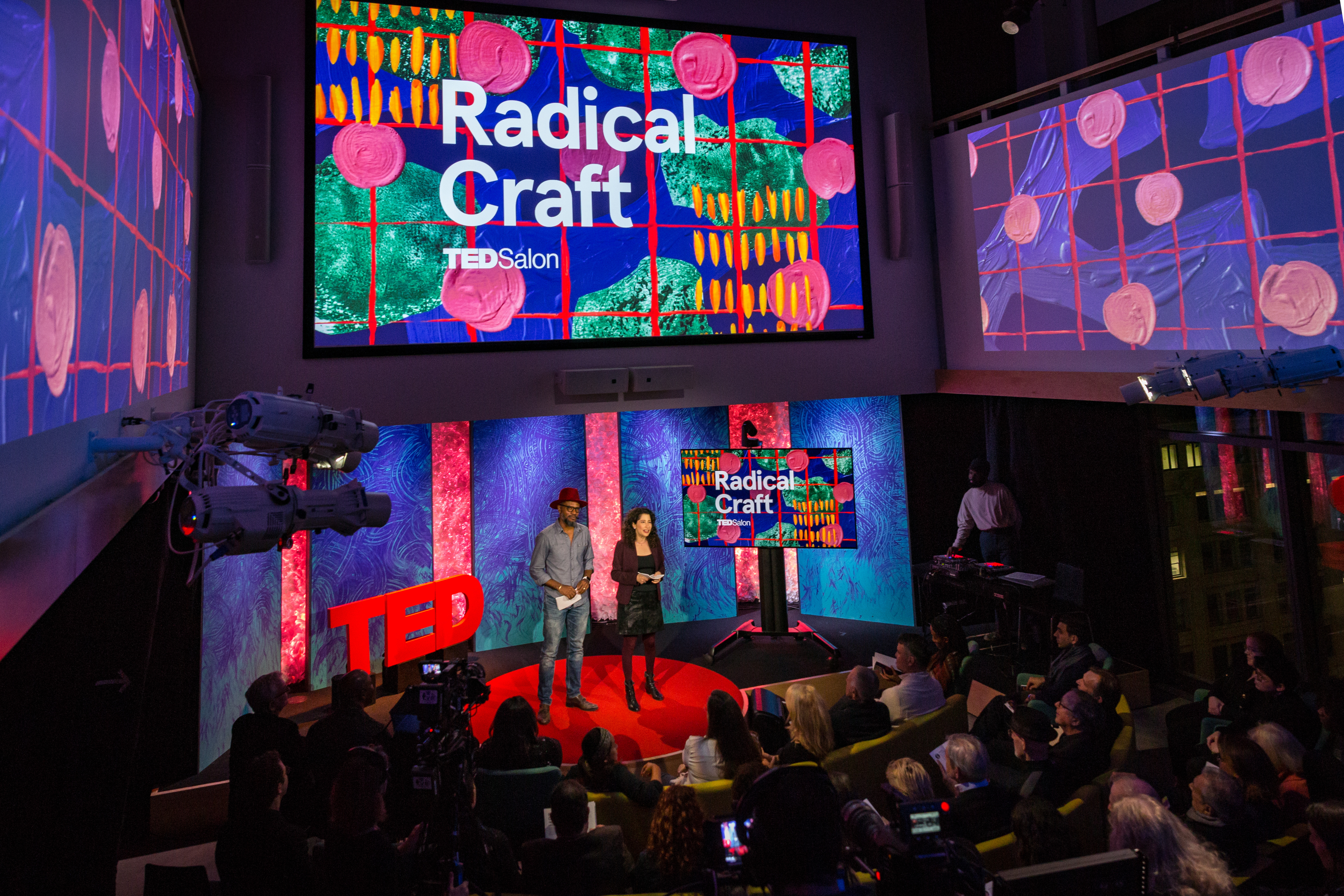 Craft — in the timeless, universal sense of making — connects us all. We craft our environments, our tools and toys, our transport and communications, our world.

At Radical Craft — an evening of talks curated by TED’s design curator, Chee Pearlman, and co-hosted by Pearlman and Stephen DeBerry — seven designers, inventors, artists, musicians and storytellers took to the stage at the TED World Theater. They explored the world of radical making — and shared the beautiful, strange, puzzling and joyful  experiences they found there. 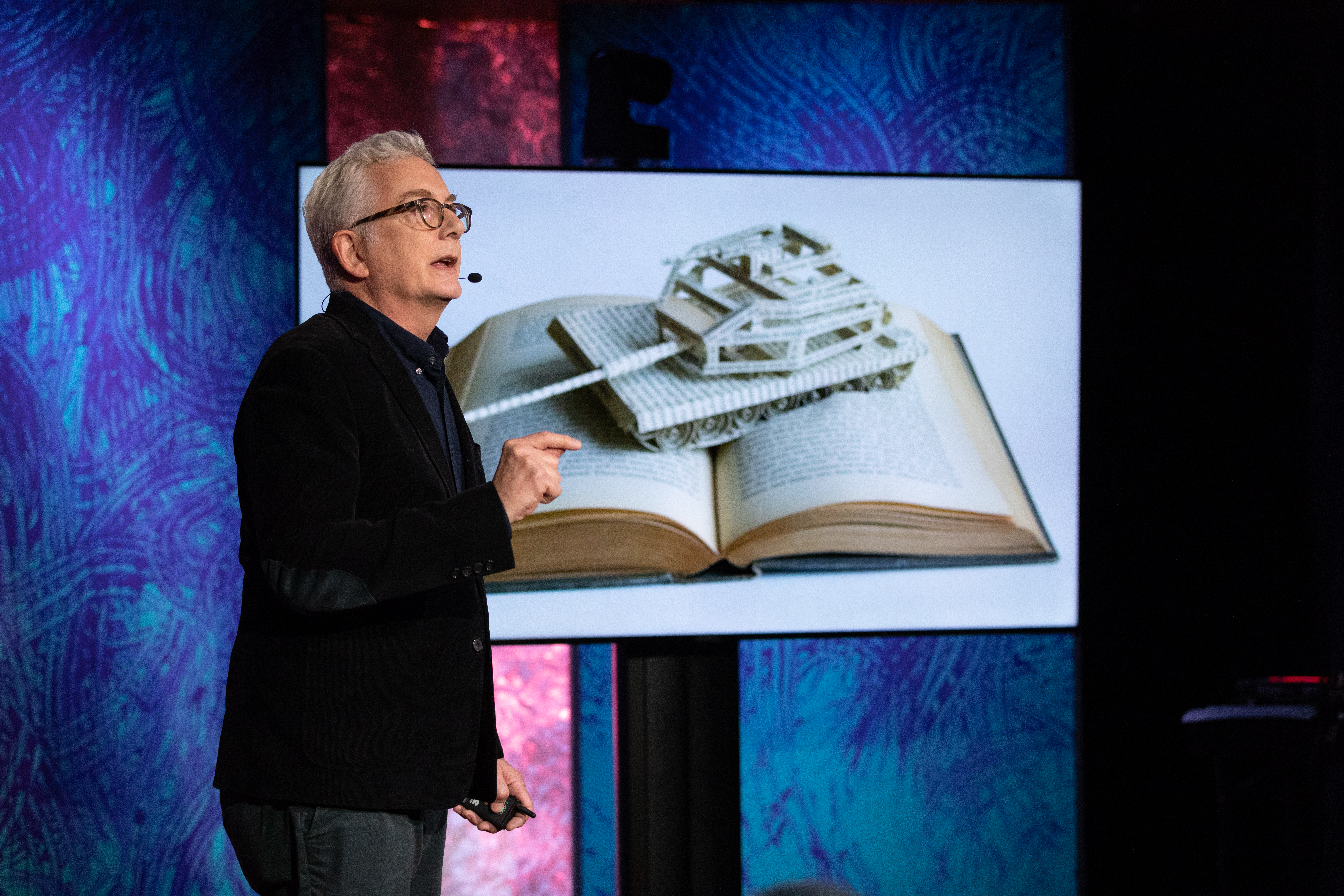 Stephen Doyle leads a double life: by day, he runs a much-lauded design firm, and after hours, he is the maker of radically inventive art. (Photo: Ryan Lash / TED)

A graphic designer who plays with words. Editors and designers are sometimes seen as belonging to separate tribes: the former speaks in the language of words, while the latter communicates in images. Stephen Doyle, a New York City–based graphic designer, happens to be bilingual — and his home is the spot on the Venn diagram where the two camps overlap. “I lift the words off the page and bring them into the three-dimensional world that we live in,” he says. This could mean making the letters on the cover of a Vladimir Nabokov book look like pinned specimens, slyly alluding to the author’s butterfly-hunting habit. Or, to mark the 75th anniversary of the 19th Amendment that gave women the right to vote, blowing up the letters of one of its sentences to be eight feet high, and pasting them on the floor of Grand Central Station for commuters to walk on and absorb. Doyle also delights in cutting up the words from books and reconfiguring them: a paper tank of text rises from the pages of Machiavelli’s The Prince, while a cloud of contagious prose is emitted from Albert Camus’s The Plague. “I get to build sculptures that ask questions, making monuments to language to focus on the profound power and incredible importance of words,” Doyle says, “because words matter.”

Perspective of the world from an astronaut’s point of view. What job is best for a young man who’s been a tennis ace, a cross-country traveler, a chemistry nerd and an NFL draftee? Why obviously: an astronaut. When he was a kid, Leland Melvin never thought he’d be “one of those moon guys,” but as he was presented new opportunities — each grander than the next — he began to see his world open up in the most magnificent ways. By accepting each challenge with an open mind, passion and curiosity, Melvin has lived a storied life on Earth — and in orbit, among the stars in the International Space Station. Traveling at 17,500 miles per hour (and watching the sunrise and sunset every 45 minutes) brought a holistic point of view to his life, one that he’s looking to share. On the TED stage, Melvin urges others to join him in broadening their horizons and appreciating the ways we’re all connected on Earth. “Perspective is something that we all get, that we all have,” he says. “It’s just how far do we open up our blinders to see that shift and change.” 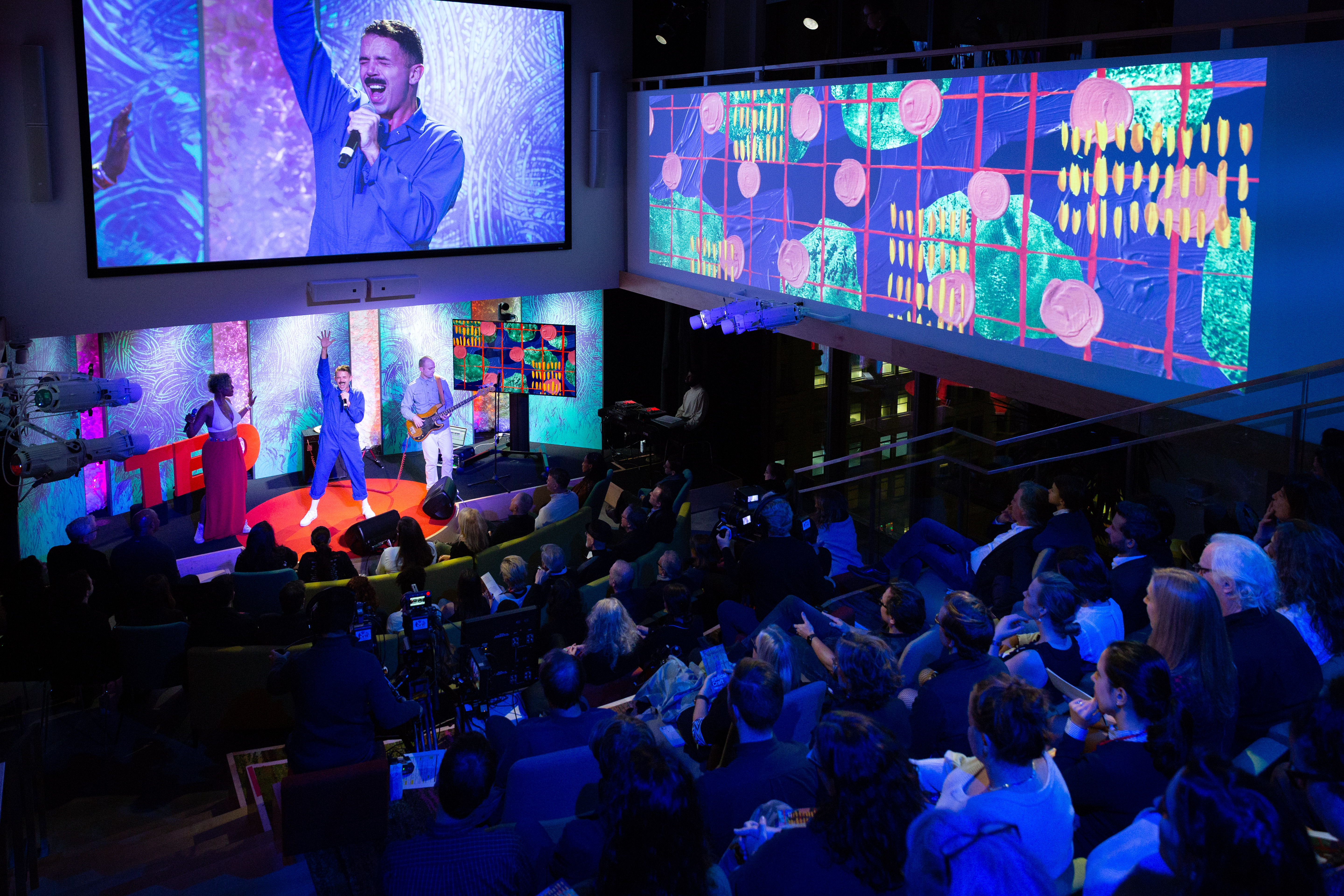 A fusion of funk, pop and Latin rhythms. On the heels of the Salon’s heady opening half hour, New York City’s Crush Club lay down some earthy, Studio 54-infused funk frosted with soaring falsetto vocals. Playing three songs — “My Man,” their new single “Bohanna” and “We Dance” — the band noticeably raises the temperature in the TED theater. New York-based DJ Jerome keeps the show moving with some electro-acoustic sampling, spinning tunes over the course of whole evening. 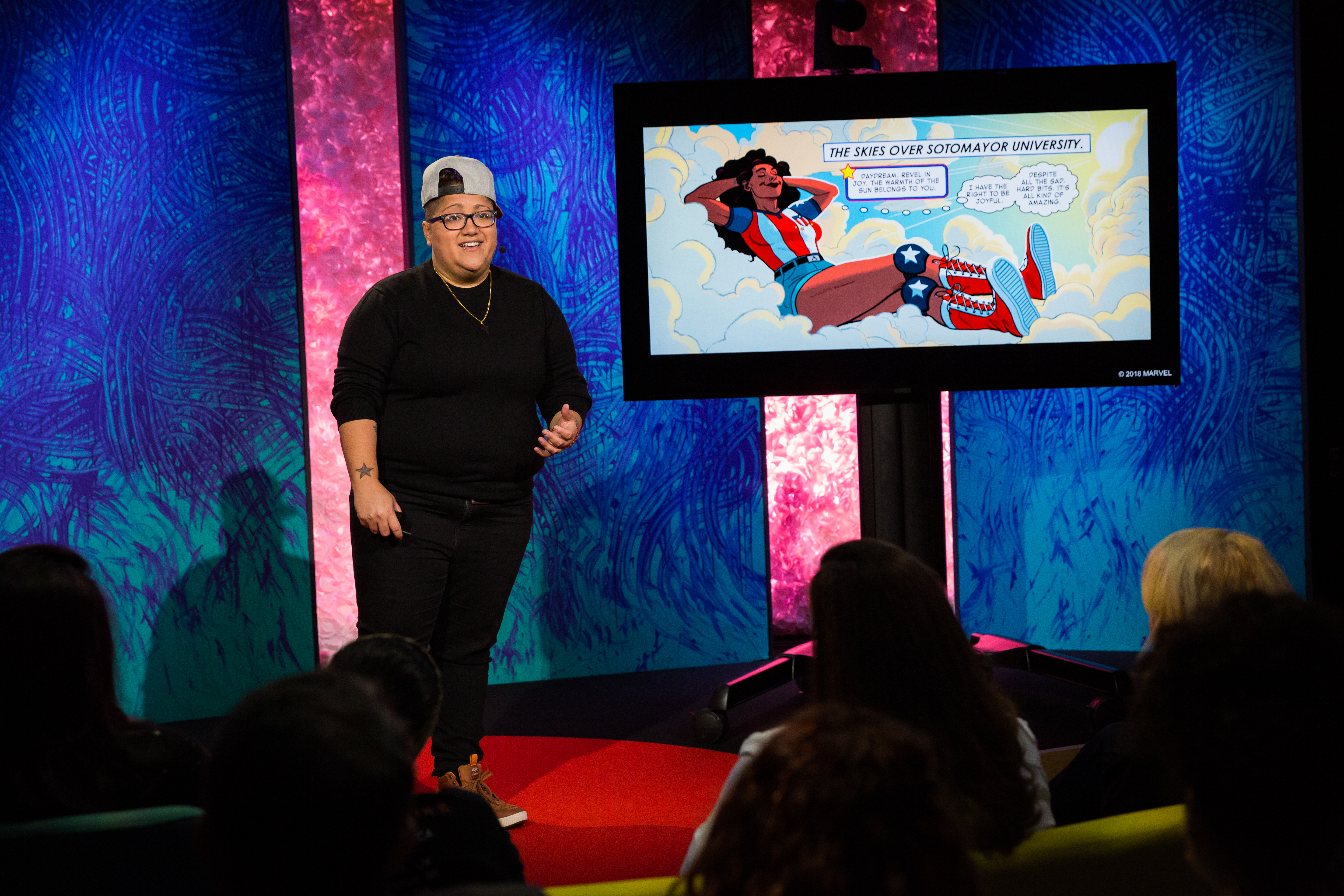 Gabby Rivera, the author of Marvel’s America Chavez series, is redefining the concept of superheroes. “That myth of having to go it alone and be tough is not serving us,” she says. (Photo: Ryan Lash / TED)

The superhero we need right now. With Marvel’s America Chavez, writer Gabby Rivera is penning a new kind of superhero — one that reflects the faces of her community in the Bronx and the idea that “soft is the new super.” Informed by her own childhood as a queer Latina in New York City surrounded by strong Puerto Rican women, Rivera built a narrative that resonates with people on the margins, slipping “love notes to [America] and all the other queer kids of color trying to be magnificent.” Throughout the series, Rivera has intentionally made space for America’s (super)humanity, giving her something she says the women of her family never had: the permission to be soft. So, while America is out punching Nazis and fighting off evil corporations, her mentors encourage her to take time to quiet her mind and teach her that asking for help is not weakness. “That myth of having to go it alone and be tough is not serving us,” Rivera says. “Even America Chavez, a whole entire superhero, needed a team of support to find herself … It’s that space where softness and vulnerability meet strength that we transcend our everyday selves.”

The strange, intellectually masochistic and incredibly joyful world of puzzles. What do a video of a chicken-suit-wearing dancer, crowds of LEGO people looking at LEGO versions of famous artworks, and the replica of a WWII cryptographic device built out of cardboard have in common? They’re all examples of the diabolically difficult puzzles in what Alex Rosenthal calls “the Olympics meets Burning Man” for super-nerds: the MIT Mystery Hunt. A marathon puzzle-solving competition, the MIT Mystery Hunt takes place over dozens of sleepless hours, with teams drawn from more than 2,000 scientists, explorers, composers, cryptographers and other thinkers. The teams gather to extract information buried within a puzzle that is “obtuse enough to make you work for it, but elegant enough so that you can get to the ‘aha’ moment where everything clicks into place,” says Rosenthal. It’s this “aha” moment — an almost physical high inspired by a instant mental clarity — that is the true prize of the competition. Humans love puzzles, but solving a challenging conundrum brings us more than mere satisfaction. According to Rosenthal, successful puzzles help build teams, reveal new perspectives, expand your mind — and just may infuse your world with more joy. 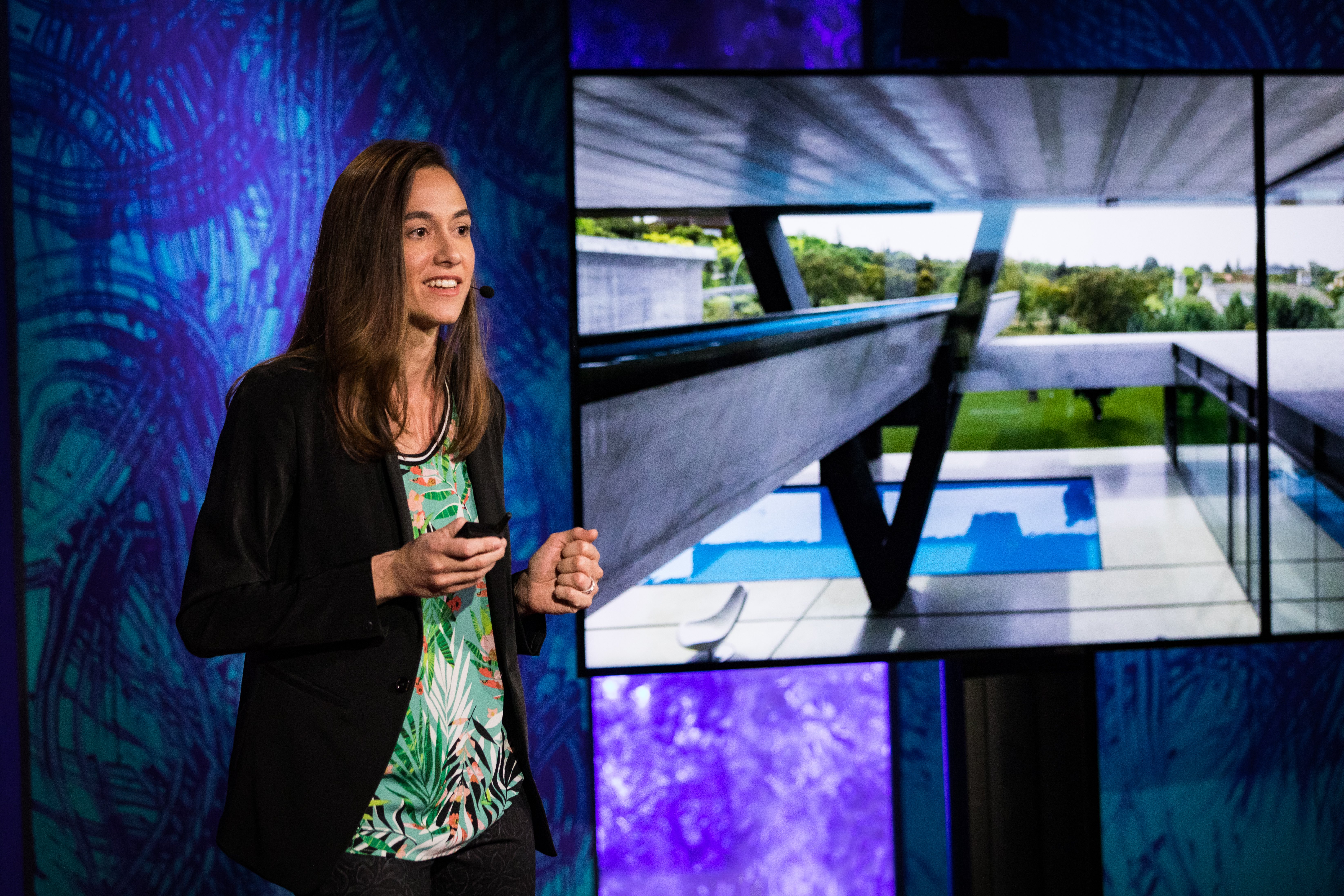 Radical architecture. Architect Débora Mesa Molina and her firm Ensamble Studio transform prosaic, undervalued, overlooked materials into breathtaking bespoke structures. Architecture is a balance between following the rules and making room for experimentation, Mesa Molina says — a mixture that characterizes many of her firm’s projects. A cultural building in Santiago de Compostela, for instance, incorporates scavenged chunks of industrial granite — a material required by the city’s building codes — into a bustling urban park. Mesa Molina employed a similar approach for her family’s home in Madrid, using industrial materials to create a comfortable and cozy feel. When the family moved across the Atlantic to Brookline, Massachusetts, they again became their own clients, building a family home from parts they prefabricated themselves from low-cost materials, transforming a parking structure into a home. Mesa Molina finishes her talk with a stunning look at Ensamble’s recent project for the Tippet Rise Art Center, just completed on a 10,000-acre ranch in Montana. Their vision? To create a constellation of spaces across the land, meant to immerse visitors in the surrounding wilderness. “By using the resources at our disposal in radical ways, by making a space for experimentation, we are able to bring to light architectures that find the beauty latent in the raw and imperfect things that surround us,” she says, “that elevate them and let them speak their own language.”