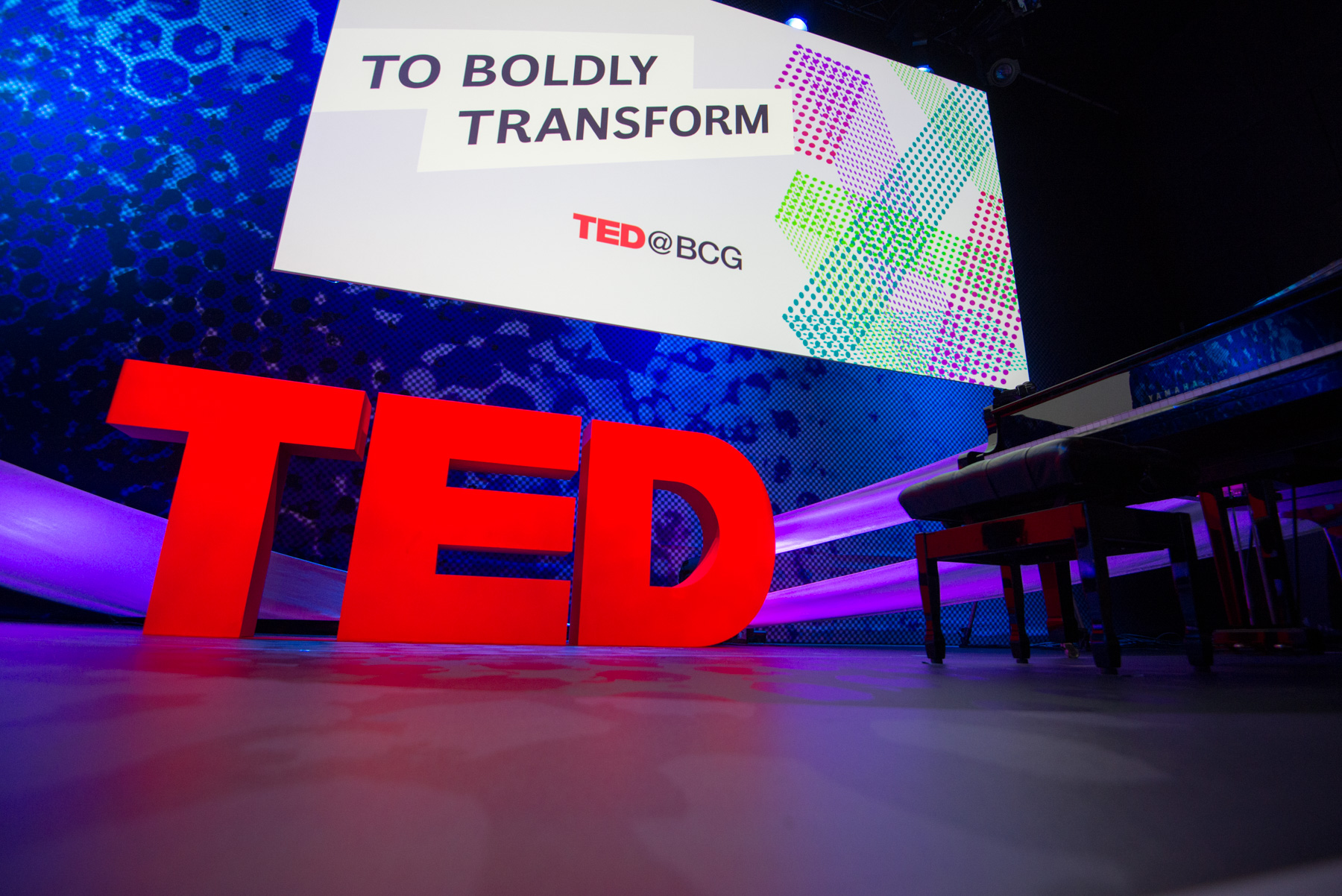 At the latest TED@BCG event at the Palais de Tokyo, in Paris, a diverse range of speakers took on the theme “to boldly transform.” Photo: Richard Hadley/TED

The future is built by those who see opportunities for change and act on them. At TED@BCG — the latest TED Institute event, held on May 18, 2016, at the Palais de Tokyo in Paris — speakers explored what it means to transform boldly. In three sessions of talks, curated and hosted by TED’s Editorial Director, Helen Walters, speakers shared insights about the future of our relationship with nature, the changing makeup of our organizations, the evolving interconnectedness of our economies and more, challenging preconceived notions and embracing change as the only constant.

After opening remarks from Rich Lesser, BCG’s president and CEO, the talks in Session 1 challenged us to look around to see how we might create change here and now, in our workplaces, teams and lives.

Develop a relationship with your curiosity. Not everyone has a friendly rapport with the question mark. Culture critic Laura Fox believes that to become intimately acquainted with knowledge, we must become comfortable with the words, “I don’t know.” By expressing ignorance and confronting our fear of judgement, she says, we can catalyze the painful, gritty task of admitting inexperience into growth — both personally and intellectually.

Want to get ahead? Be paranoid. Lars Fæste helps CEOs transform their businesses, and over the years, he’s noticed something troubling: Managers tend to settle with success instead of aggressively looking for ways to transform. With today’s unprecedented rate of change, transformation is the key to staying ahead of competition and volatile market trends. In other words, If it ain’t broke, fix it. “The paranoid, they thrive. Transformation is a necessity, not an option. Either you do it, or it will be done to you.”

Light made by bacteria. Designer Sandra Rey invites us to look to nature to find unique solutions to some of the world’s most pressing problems. As an example, she describes her own effort to change the way we produce light by using one of nature’s own superpowers: bioluminescence. Using DNA sequences ordered from DNA banks, Rey is developing a technology to create biological lamps by coding genes for bioluminescence in E.coli bacteria. These lamps could not only change the source of our light, says Rey, they could change the entire paradigm of light: how we produce it, buy it, distribute it, how we use it, and how we regulate it. 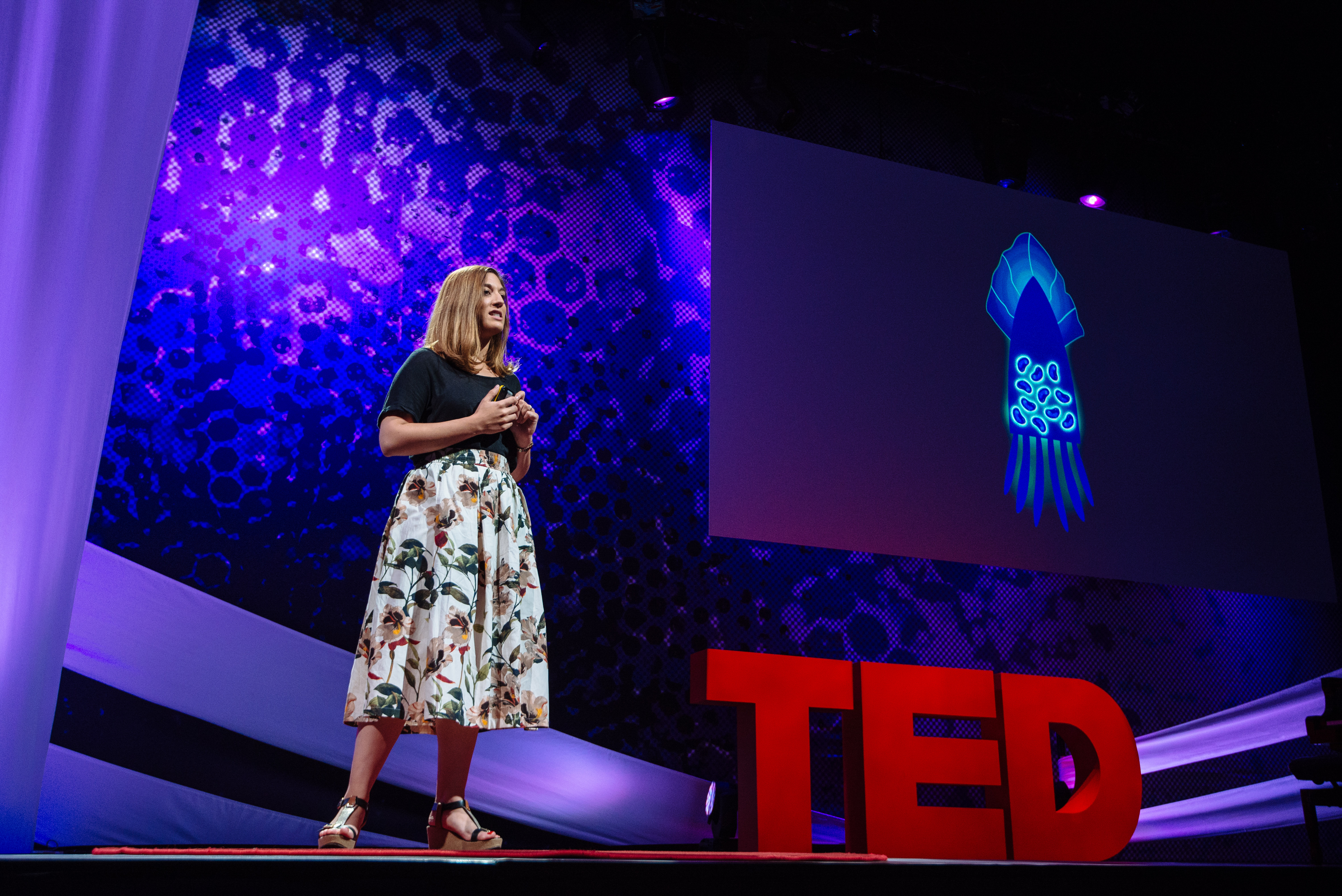 Sandra Rey wants to use bioluminescence to change the way we light our homes and cities. Photo: Richard Hadley/TED

The fourth manufacturing revolution. Imagine a world where you can buy a custom-made product that’s exactly what you want, with the features you need, the design you prefer, at the same price as a product that’s been mass-produced. According to industrial systems thinker Olivier Scalabre, a revolution in manufacturing will soon make that possible. Scalabre predicts that new convergences of industry and technology will boost worldwide productivity by a third — and will make consumer proximity the most important factor in manufacturing. “If we play it right,” Scalabre says, “we’ll see sustainable growth in all of our economies.”

Why we must safeguard interconnectivity. The 2008 global financial crisis left much of the world reeling — markets went under, millions of jobs were lost and economic security was deeply compromised — in only a few days. IMF economist Min Zhu urges us to open our eyes to the effects of globalization, and the idea that a country’s size does not equate to economic influence; a small blow in one country can cause lasting damage worldwide. Zhu asks that we protect international financial security by working to understand the complex world around us.

Hallucinatory art, created by a neural net. Can computers create art? Blaise Agüera y Arcas is a principal scientist at Google, where he works with deep neural nets for machine perception and distributed learning. Agüera y Arcas breaks down the equation of perception, showing how computers have learned to recognize images through an iterative process. But when you turn the equation around, asking the computer to generate an image using the same neural network built to recognize them, the results are spectacular, hallucinatory collages that defy categorization. “Perception and creativity are connected,” Agüera y Arcas says. “Anything able to do perceptive acts is able to create.” 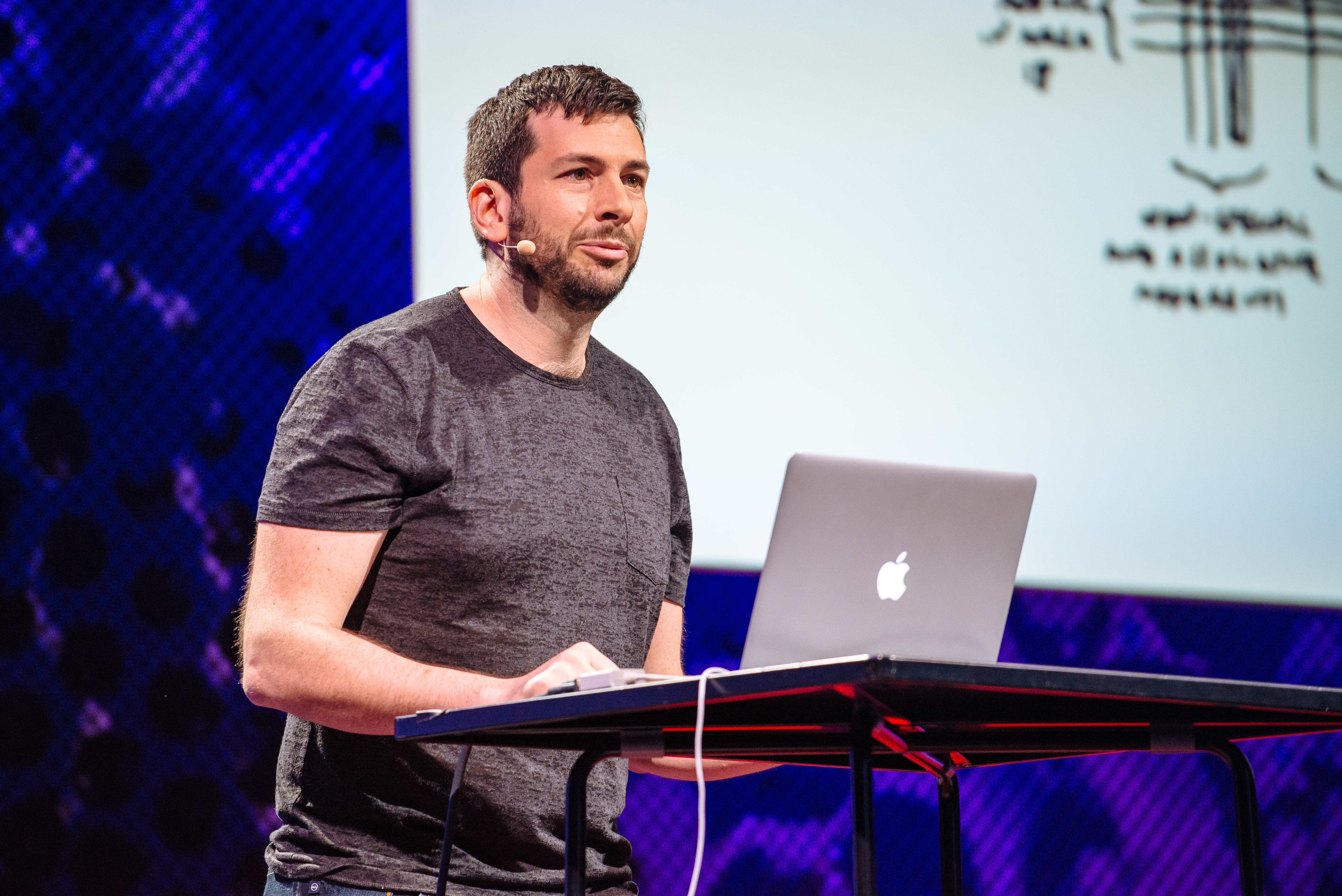 In Session 2, speakers recognized that it isn’t enough to just acknowledge and anticipate the changes coming our way, but that we have to face them head on.

An Arab woman’s advice for fellow professionals. The poor, oppressed Arab woman — this tired and derogatory yet popular narrative doesn’t discourage Leila Hoteit. Instead, she uses it as fuel to prove that professional Arab women like her are their own role models, pushing boundaries every day while balancing more responsibilities than their male counterparts. Tracing her career as an engineer, advocate and mother in Abu Dhabi, she shares three lessons: Convert other people’s negative judgment into motivation, actively manage your life to leave work at work — and support fellow women instead of blindly competing against them. 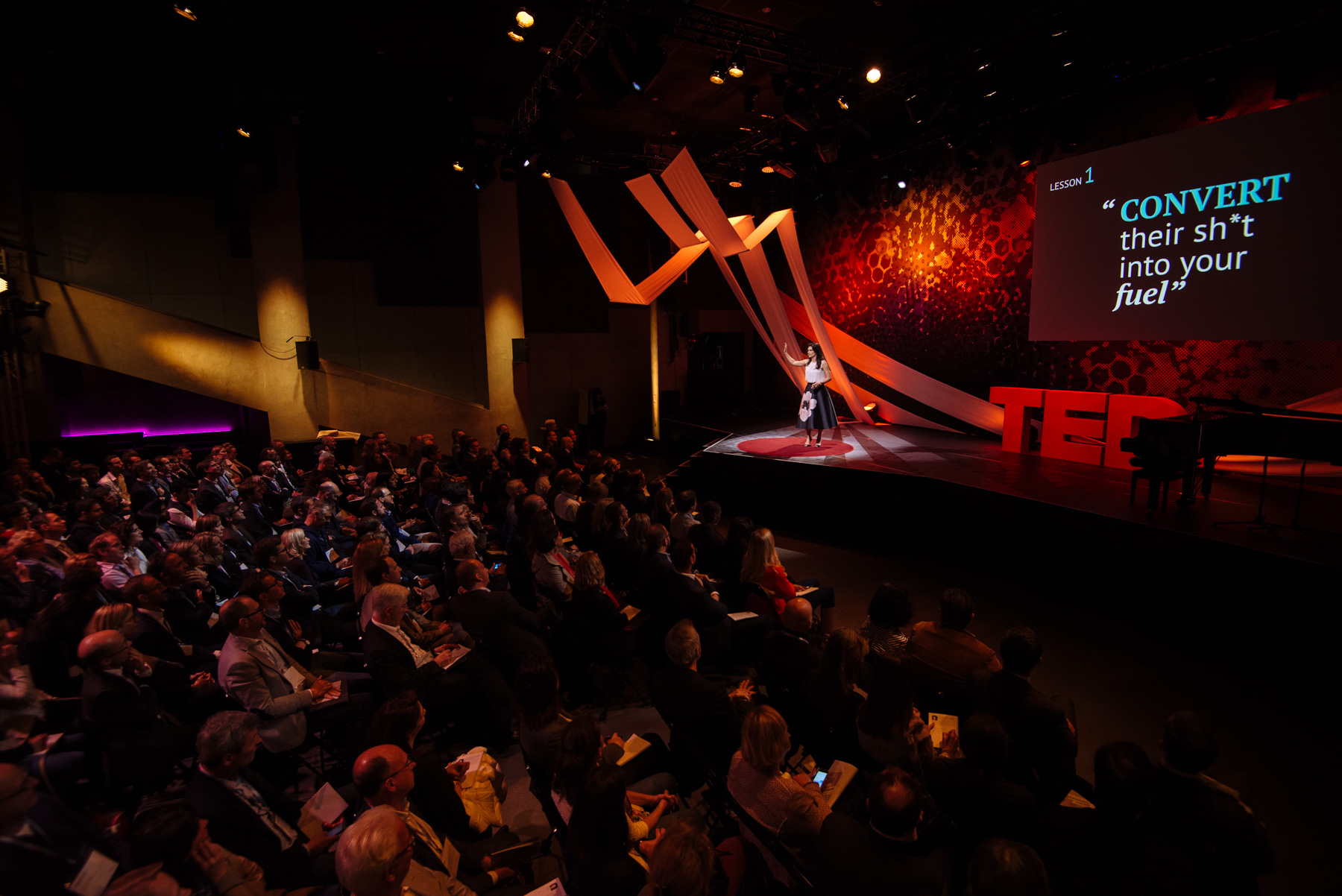 A DNA revolution. Using DNA, we can create new medicines or make sure our food is safe to eat, but DNA technology has been confined to the ivory tower, until now. “We are living in the era of personal DNA technology,” says Sebastian Kraves, a molecular neurobiologist committed to bringing DNA analysis to the masses. From a truffle farmer analyzing his mushrooms to make sure they are not knockoffs to a virologist mapping the Ebola outbreak in Sierra Leone, Kraves shares examples of individuals using personal DNA technology to ask questions and solve problems in diverse fields and environments. “Revolutions don’t go backwards,” he says, and this one is “spreading faster than our imagination.”

Who says change needs to be hard? When transforming your organization, put people first. Change expert Jim Hemerling lays out 5 simple rules to convert company reorganization into an empowering, energizing task: inspire through purpose, go all in, enable people to succeed, instill a culture of continual learning and lead through inclusivity. By following these steps, he suggests, adapting your business to reflect today’s constantly-evolving market will feel invigorating rather than exhausting.

Dark and delicate, chaotic rumble. Classical pianist Naufal Mukumi centered Session 2 with a selection of pieces by Russian composer Alexander Scriabin. Opening with a dark and delicate melody, he slowly progressed to a chaotic rumble, expertly creating an elegant surrealist tone. Mukumi’s performance was a perfect, soothing intermission for an exciting session. 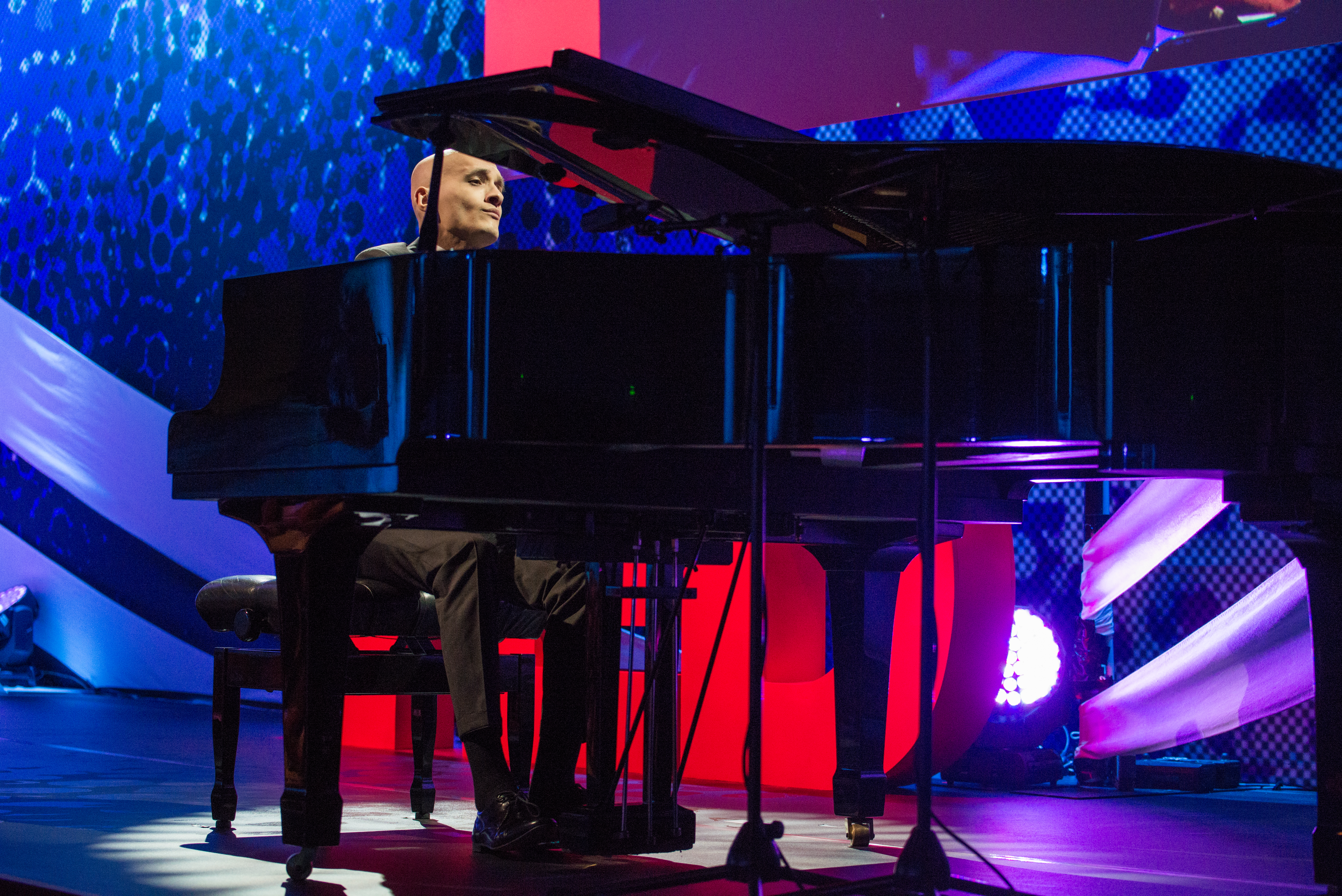 The corporate immune system. “Where better to turn for advice than nature — that’s been in the business of life and death longer than any company,” asks BCG’s own Martin Reeves. In his second turn on the TED@BCG stage, Reeves identifies six features — redundancy, diversity, modularity, adaptation, prudence, embeddedness — that underpin natural systems, giving them resiliency and endurance. Applying these principles can mean the difference between life or death for a company too. But in order to think more biologically, we need to change our business mindset and focus less on goals, analysis, efficiency and short-term returns. We need to ask ourselves not only “how good is our game?” but “how long will that game last?”

The future of money. There’s no reason why a coin or a dollar bill needs to have value, except that we’ve decided that it should, says Neha Narula, director of research at the Digital Currency Initiative, a part of the MIT Media Lab. Money is really about the relationships we have with each other; it’s a collective story about value by society, a collective fiction. Analog money, like cash, and digital money, like credit cards, both have some built-in impediments that slow them down (like needing to print or mint hard cash). Now, with cryptocurrencies like Bitcoin, Ethereum and Stellar, we’re moving towards a time of programmable money, where anyone can securely pay anyone else without signing up for a bank, asking permission, doing a conversion or worrying about money getting stuck. “Programmable money democratizes money,” Narula says. “By democratizing money, things are going to change and unfold in ways we can’t even predict.”

Finally, in Session 3, speakers laid down the gauntlet to status quo thinking, encouraging us all to do more in whatever ways we can.

A whole-body music composition. Producer, songwriter, beatboxer and vocal arranger MaJiKer uses his whole body to express himself through music. At TED@BCG, he premiered a new piece that combines piano (occasionally played with his foot and head) with beatboxing to craft a catchy, experimental composition.

Harnessing nature’s own designs. Unlike the mere 200-year timespan of modern science, nature has perfected its materials over three billion years, creating materials superior to anything we have managed to produce by ourselves, argues nanobiotechnologist Oded Shoseyov. Shoseyov walks us through amazing examples of materials found across the plant and animal kingdoms in everything from cat fleas to sequoia trees — and the creative ways his team is harnessing these materials for applications as widespread as sports shoes and medical implants.

Transforming the future of two million children. Education innovator Seema Bansal forged a path to public education reform for 15,000 schools in Haryana, India, by setting an ambitious goal: By 2020, 80 percent of children should have grade-level knowledge. The catch? The reforms must be scalable for each school, and function within existing budgets and resources. Bansal and her team found success in low-cost, creative techniques — such as communicating with teachers using SMS group chats — that have measurably improved learning and engagement in the past year.

The commodity of trust. “Every now and then, a truly stellar new technology emerges, and it always takes us to places we never imagined,” says blockchain specialist Mike Schwartz. We witnessed this type of revolution with the combustion engine, the telephone, computers and the Internet, and now blockchain promises to be the next to transform us. Blockchain will commodify trust in the way that the Internet commodified communication, so that “people with no knowledge of each other can interact with confidence and without relying on a trusted third party to do so.” But as with any new technology, there is a steep learning curve and it will take a lot of trial and error to make that future a reality, “In order to shape this future you need to participate. Those organizations that learn how to play in more open and collaborative ecosystems will survive and thrive. Those that don’t probably wont.”

A tiny forest you can grow in your backyard. Forests don’t only have to be far-flung nature reserves, isolated from human life. TED Fellow Shubhendu Sharma brings small, diverse forests back to urban life by flipping the script on engineering: Instead of taking natural resources and turning them into products, he engineers soil, microbes and biomass to kickstart nature’s uninhibited processes of growth. By mixing the right native tree species, Sharma has created 75 dense, thriving man-made forests in 25 cities worldwide.

Reinventing modern agriculture with Space Age technology. How will agriculture expand to feed our growing world in a way that doesn’t deplete resources? Lisa Dyson is working on an idea developed by NASA in the 1960s for deep-space travel — adapting it for use here on Earth. Dyson is using microbes called hydrogenotrophs — super-charged carbon recyclers that can produce nutrients in a matter of hours without sunlight and in small spaces — to create a virtuous, closed-loop carbon cycle that could sustain life on earth. These microbes can produce the building blocks of foods like pasta and bread as well as oils needed for industry. “Let us create systems that keep planet Earth, our spaceship, from not crashing, and let us develop ways of living that will be beneficial to the lives of the 10 billion that will be on this planet by 2050.” 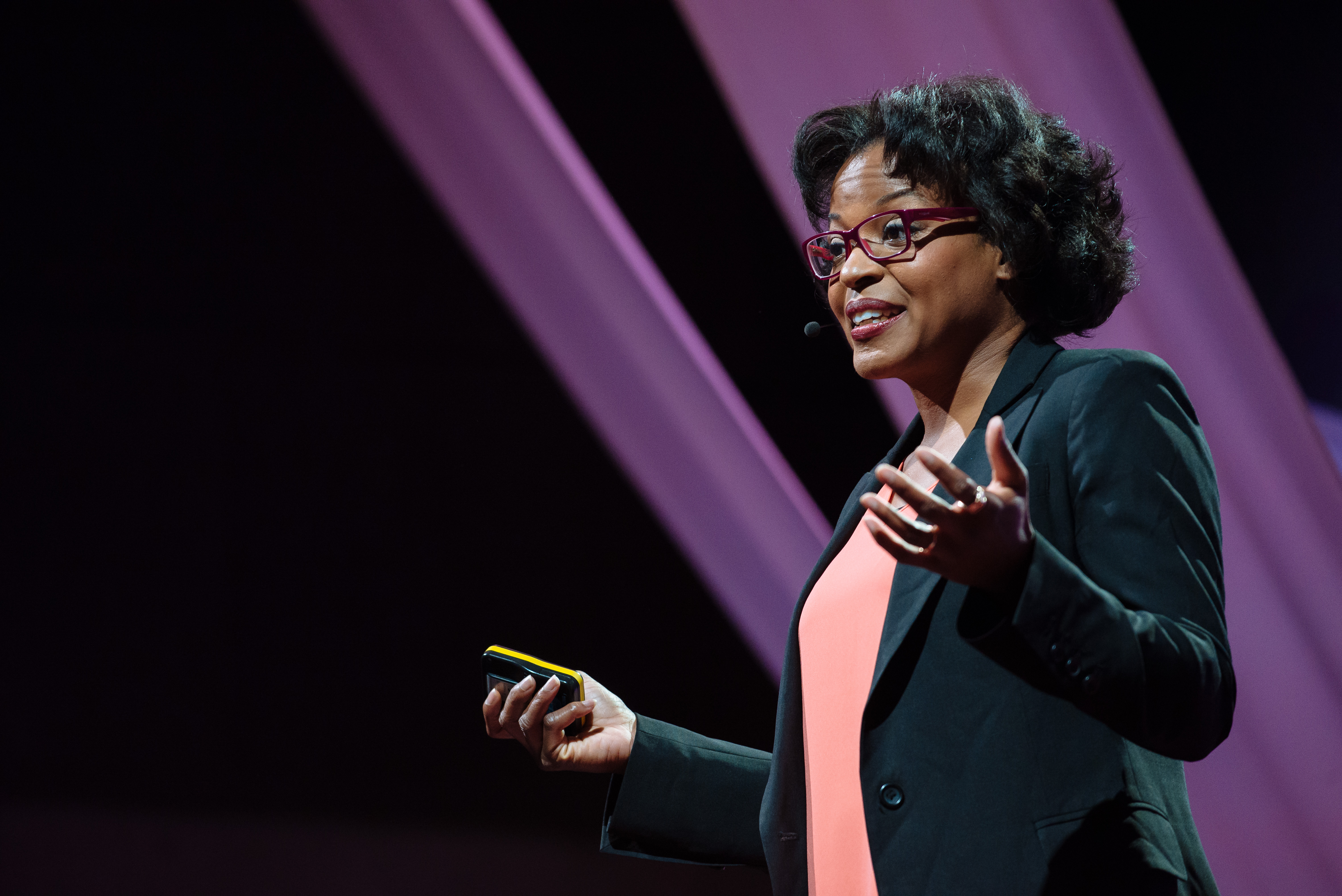 Lisa Dyson wants to use super-charged carbon recycling microbes to change the way we feed the world. Photo: Richard Hadley/TED