Seeing opportunities for change: The talks of TED@BCG

The future is built by those who see opportunities for change and act on them. At TED@BCG — the latest TED Institute event, held on May 18, 2016, at the Palais de Tokyo in Paris — speakers explored what it means to transform boldly. In three sessions of talks, curated and hosted by TED’s Editorial […]

What will blow our minds in the *next* 30 years?

[youtube http://www.youtube.com/watch?v=uR2E9i3g0po&w=560&h=315%5D Predictions are a mug’s game. If they come true, you likely didn’t push your thinking hard enough. If they don’t come true, you risk looking like an idiot. Nonetheless, many speakers at the annual TED conference have taken the plunge and proffered thoughts of what the future might look like. The video above […]

The future is coming. 6 ways it will change everything

by Blaise Agüera y Arcas, Google How will our minds be blown in the next 30 years? Well, that’s quite a long time, given the acceleration in history. Still, I’ll be brave and make six hypotheses. 1. Machine Intelligence I think that just as the Internet has been such a great driver of change across […]

What will be the most important driver of change in the future?

One of the installations at TED this year challenged attendees to vote on ten potential drivers of change in the next 30 years. The crowd had their say via that enormously sophisticated piece of technology, the sticky note. As we could likely have predicted, there wasn’t much consensus among those in Vancouver, but the range […]

by Nilofer Merchant In the next 30 years, the full Star Trek story will actually come true.  Already, we’ve seen many of the show’s far-fetched ideas come to fruition. Everyone now carries a communicator, aka the smart phone. We have medical devices that test for diseases with light, not by drawing blood (like new tests for anemia […]

What it will mean to live on a legible planet

by Andrew Blau, Deloitte Technology advances over the last 30 years mean that we have crossed an invisible threshold: for the first time in human history, we now live on a legible planet. What will blow our minds in the next 30 years is what it will mean when almost anyone can read and understand the world […] 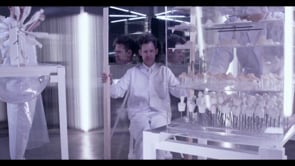 Biohacker meets Willy Wonka: Lucy McRae on the making of the incredible edible music video for Architecture in Helsinki

TED Fellow Lucy McRae (watch her TED Talk) is a body architect — an artist who explores how technology and the body may someday meet and merge. Her latest project is a fantastical and frothy music video for “Dream a Little Crazy” by Australian band Architecture in Helsinki. Watch the mouth-watering video above, and then read all […]

TED Radio Hour takes a look in the crystal ball

Take a trip back to the future with this week’s TED Radio Hour, as six TED speakers share their prophecies for what lies ahead. From curing cancer to self-driving cars, these TEDsters offer exciting visions for the future, but not without cautionary warnings. The episode starts with a walk down memory lane with Nicholas Negroponte, […]

12 talks about the future of cars, planes and rockets

On March 1 — just two days after Elon Musk appeared on the TED2013 stage — a SpaceX CRS-2 rocket lifted off from Cape Canaveral on a resupply mission for the International Space Station. Two days later, after the righting of a glitch, its Dragon capsule delivered a half-ton of supplies for the astronauts on […]

TED playlists are collections of talks around a topic, built for you in a thoughtful sequence to illuminate ideas in context. This weekend, a new playlist is available: What does the future look like? It’s the question none of us is sure how to answer: What will the world look like in 20 years? And […]

10 talks on predicting the future

We’re just a week into 2013, and the year seems filled with possibility. The turn of the New Year is generally an occasion to look back and reflect on the year that’s passed — the victories and defeats, the lives lost and the experiences found. But after we look back, we inevitably turn forward. We […]

[ted id=1583 width=560 height=315] Vicki Arroyo’s hometown is New Orleans, and after Hurricane Katrina struck, she knew firsthand the looming threat of climate change. In this eye-opening talk from TEDGlobal 2012, “Let’s prepare for our new climate,” Arroyo reveals the startling truths about droughts, rising water levels and natural disasters — that they may only […]

6 TEDxTalks envisioning the city of the future

According to the United Nations, by the year of 2050, 70% of the world’s population will be living in urban areas. So what will the city of the future look like? These are some of the questions that dominate our conception of “The City 2.0”: How will we transport ourselves? Where will we grow our […]