The term “showing off” gets a bad rap. But for Session 5 of TEDWomen 2018, a lineup of speakers and performers reclaimed the phrase — showing off their talents, skills and whole extraordinary selves. Hosted by TED’s head of conferences, Kelly Stoetzel, and head of curation, Helen Walters, the talks ranged from architecture and the environment to education and grief, taking on the fundamental challenges that we face as humans. The session featured Ane Brun, Kotchakorn Voraakhom, Kate E. Brandt, Danielle R. Moss, Carla Harris, Helen Marriage and Nora McInerny. 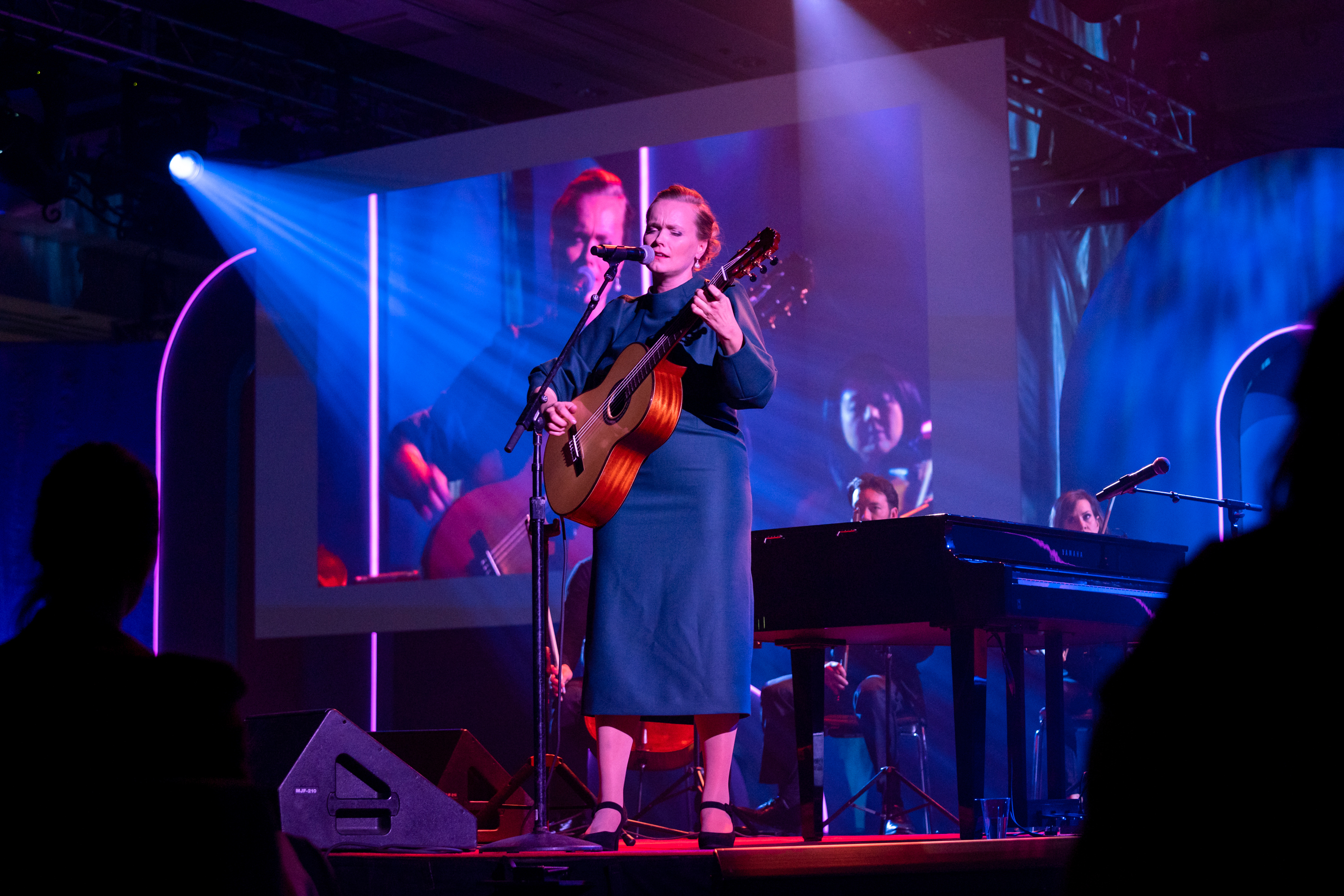 Multi-instrumentalist, singer and composer Ane Brun kicks off Session 5 with a poised, intimate performance of “It All Starts With One” and “You Light My Fire.” She performs at TEDWomen 2018: Showing Up, on November 29, 2018, in Palm Springs, California. (Photo: Callie Giovanna / TED)

It all starts with a dramatic opening. The session starts with an air of anticipation, thanks to multi-instrumentalist Ane Brun‘s opening number, “It All Starts With One.” This cabaret workout for piano and string quartet is based on “the revolution of dreams” of the Arab Spring, written to celebrate “small victories … that little drop that I, as an individual, can add to the flood of change.” Her intimate follow-up number, “You Light My Fire,” is “a statue in the shape of a song” dedicated to the unacknowledged warriors who fight for women’s rights.

Our sinking cities. At this very moment, 48 major cities across the globe are sinking — cities like New York City, Los Angeles, London, Tokyo, Shanghai and Bangkok, built on the soft ground alongside their rivers. Landscape architect and TED Fellow Kotchakorn Voraakhom comes from Bangkok herself and was displaced, along with millions of others, by the devastating flood that hit Thailand in 2011. “Our city’s modern infrastructure — especially our notion to fight floods with concrete — has made us extremely vulnerable to climate uncertainty,” she says. In the years since, she’s worked to combine the ingenuity of modern engineering with the reality of rising sea levels to help cities live with climate change. She and her team designed the Chulalongkorn Centenary Park, a big green crack in the heart of Bangkok and the city’s first new public park in more than three decades. The park is not only a site for recreation and beautification; it also helps the city deal with water through some ingenious design. Bangkok is a flat city, so by inclining the whole park, it harnesses the power of gravity to collect every drop of rain — holding and collecting up to a million gallons of water during severe floods. “This park is not about getting rid of flood water,” she says. “It’s about creating a way to live with it.” In a sinking city where every rainfall is a wake-up call, this “amphibious design” provides new hope of making room for water.

“Greening” Google with a circular approach. “What if, like nature, everything was repurposed, reused and reborn for use again?” asks Google’s head of sustainability, Kate E. Brandt, who is in charge of “greening” the tech giant. Every time someone completes a search on Google or uploads a video to YouTube, Google’s data centers are hard at work — filled with servers using a significant amount of energy. And with demand for energy and materials only continuing to grow, Brandt’s work is to figure a sustainable path forward. Her idea? To create a circular economy grounded in three tenets: designing out waste, keeping products and materials in use, and transitioning to renewable energy. In this circular world, all goods would be designed to be easily repaired and remanufactured. She imagines, for instance, that even clothes and shoes could be leased and returned — with old clothes going back to the designer to reuse the materials for a new batch of clothing. “If we each ask ourselves, ‘What can I do to positively impact our economy, our society, our environment?’ — then we will break out of the global challenges that have been created by our take-make-and-waste economy, and we can realize a circular world of abundance,” she says. 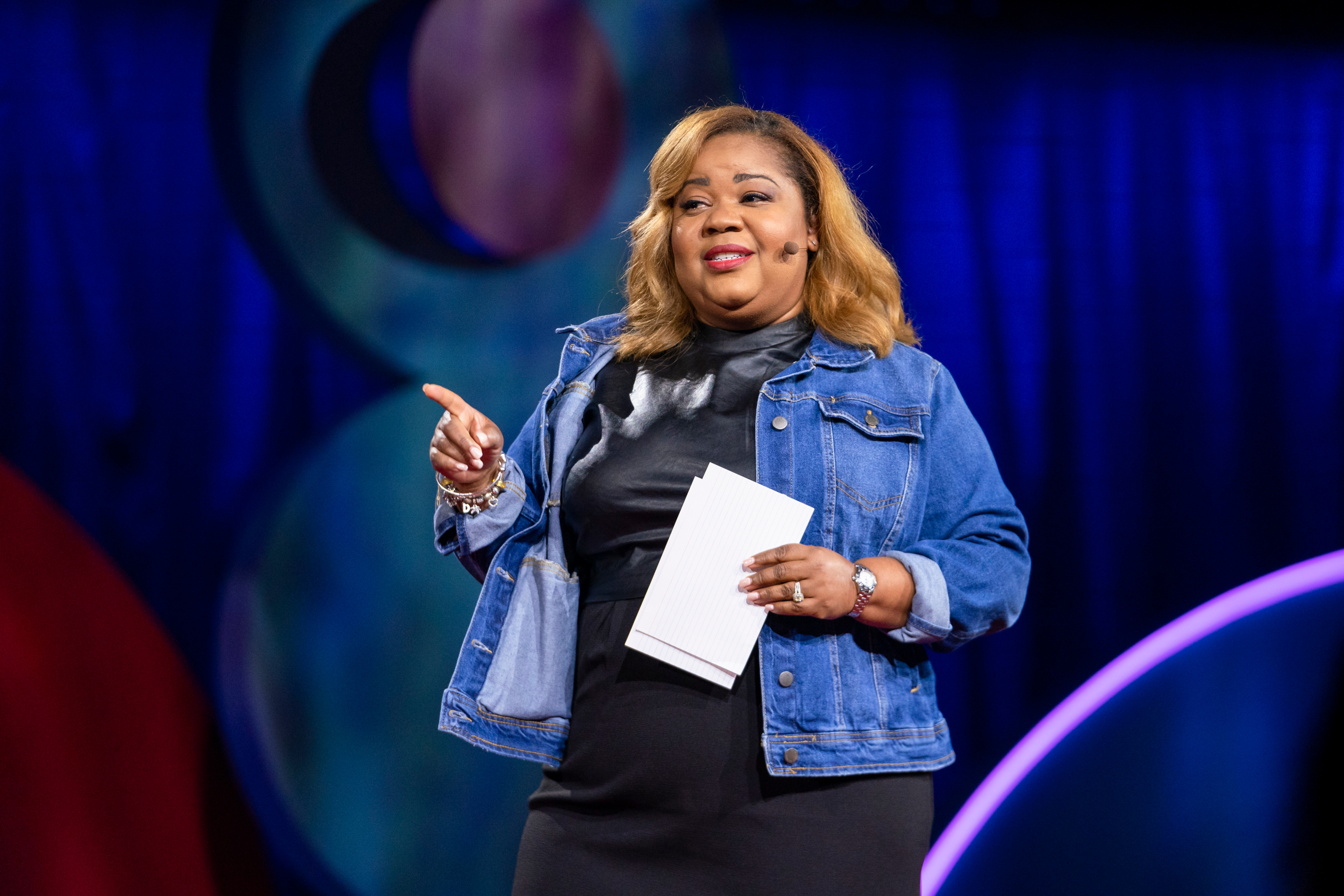 Activist Danielle R. Moss advocates for “the forgotten middle”: those students and coworkers who are often overlooked but who, when motivated and empowered to succeed, can reach their full potential. She speaks at TEDWomen 2018: Showing Up, November 29, 2018, Palm Springs, California. (Photo: Callie Giovanna / TED)

Tapping into the forgotten middle. We all know “the forgotten middle” — “they’re the students, coworkers and plain old regular folks who are often overlooked because they’re seen as neither exceptional nor problematic,” says activist and former educator Danielle R. Moss. But, she says, there is more here. “I think there are some unclaimed winning lottery tickets in the middle,” Moss says. “I think the cure for cancer and the path to world peace might very well reside there.” Moss has spent much of her career trying to help this group reach their full potential. In middle school, she herself was languishing in that strata, until her mother noticed and set her on a different path. Later, in New York City, Moss helped create a program to work with the forgotten middle and identified some of the core elements of a formula to motivate them. These include holding kids to high expectations (instead of asking, “Hey, do you want to go to college?”, ask, “What college would you like to attend?”), giving them “the hidden curriculum” needed to succeed (study skills, leadership development, liberal-arts coursework and adult support), and making them accountable to themselves, each other and their communities (seeing themselves as belonging to a group of young people who came from the same backgrounds and who were all aspiring for more). Moss says, “When I think of my kids, and I think of all the doctors, lawyers, teachers, social workers and artists who came from our little nook in New York City, I hate to think what wouldn’t have happened if we hadn’t invested in the kids in the middle.”

In our careers, we all need a sponsor. Corporate America insists it is a meritocracy — a place where those who succeed simply “put their heads down and work really hard.” But former Wall Street banker Carla Harris tells us this simple truth: that’s not the case. To really move forward and be recognized for your work, you need someone else to make a case for you — especially in those pivotal decisions that are often made behind closed doors. This person isn’t a mentor, champion or advocate — but a sponsor, someone who is “carrying your paper into the room … pounding the table on your behalf.” Sponsors need three things: a seat at the table, power in the decision-making process and an investment in you and your work. Harris says you can attract a sponsor by utilizing two forms of social capital: performance currency, which you gain when you perform beyond expectations, and relationship currency, which you gain by engaging meaningfully with the people around you. “You can survive a long time in your career without a mentor,” Harris says, “but you are not going to ascend in any organization without a sponsor.” 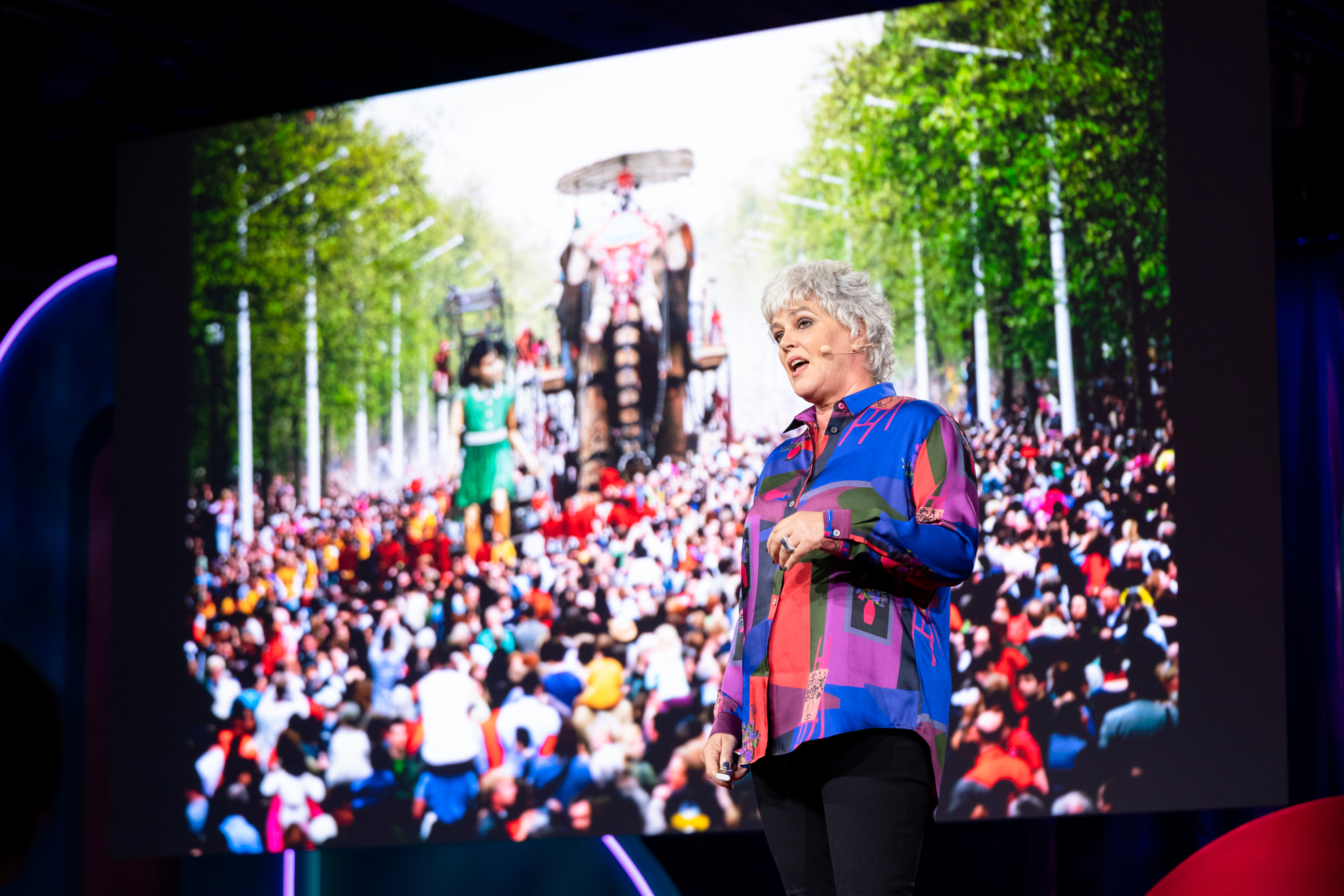 A moment when curiosity triumphs over suspicion, and delight banishes anxiety. Designer Helen Marriage brings people together through larger-than-life art and spectacle. “I want to take you to a different kind of world — a world of the imagination where using this most powerful tool that we have, we can transform our physical surroundings,” she says. With Artichoke, the company she cofounded in 2006, Marriage seeks to create moving, ephemeral moments that reveal beauty among ruins, reexamine history and whimsically demonstrate what’s possible. Why? “In doing so, we can change forever how we feel, and how we feel about the people we share the planet with.” On the TEDWomen stage, Marriage tells the tale of three cities she transformed into spaces of culture and connection. In Salisbury, French actors performed Faust on stilts with handheld pyrotechnics; in London, she conjured magic by shutting down the city streets for four days to tell the story of a little girl and an elephant. And in Derry (also known as Londonderry) — a town still gripped by Northern Ireland’s Protestant/Catholic conflict — she helped address community tribalism in Burning Man fashion, building a wooden temple that housed written hopes, thoughts, loves and losses — then burning it down. Reminiscent of a town ritual that usually deepens rifts, the work brought thousands of people together on both sides to share and experience a deeply profound moment. As she says: “In the end, this is all about love.”

Moving forward doesn’t mean moving on. In a heartbreaking, hilarious talk, writer and podcaster Nora McInerny shares her hard-earned wisdom about life and death. In 2014, soon after losing her second pregnancy and her father, McInerny’s husband Aaron died after three years fighting brain cancer. Since then, McInerny has made a career of talking about life’s hardest moments — not just her own, but also the losses and tragedies that others have experienced. She started the Hot Young Widows Club, a series of small gatherings where men and women can talk about their partners who have died and say the things that other people in their lives aren’t yet willing to hear. “The people who we’ve lost are still so present for us,” she says. Now remarried, McInerny says that we need to change how we think about grief — that it’s possible to grieve and love in the same year and week, even the same breath. She invites us to stop talking about “moving on” after the death of a loved one: “I haven’t moved on from Aaron, I’ve moved forward with him,” she says. And she encourages us to remind one another that some things can’t be fixed, and not all wounds are meant to heal.