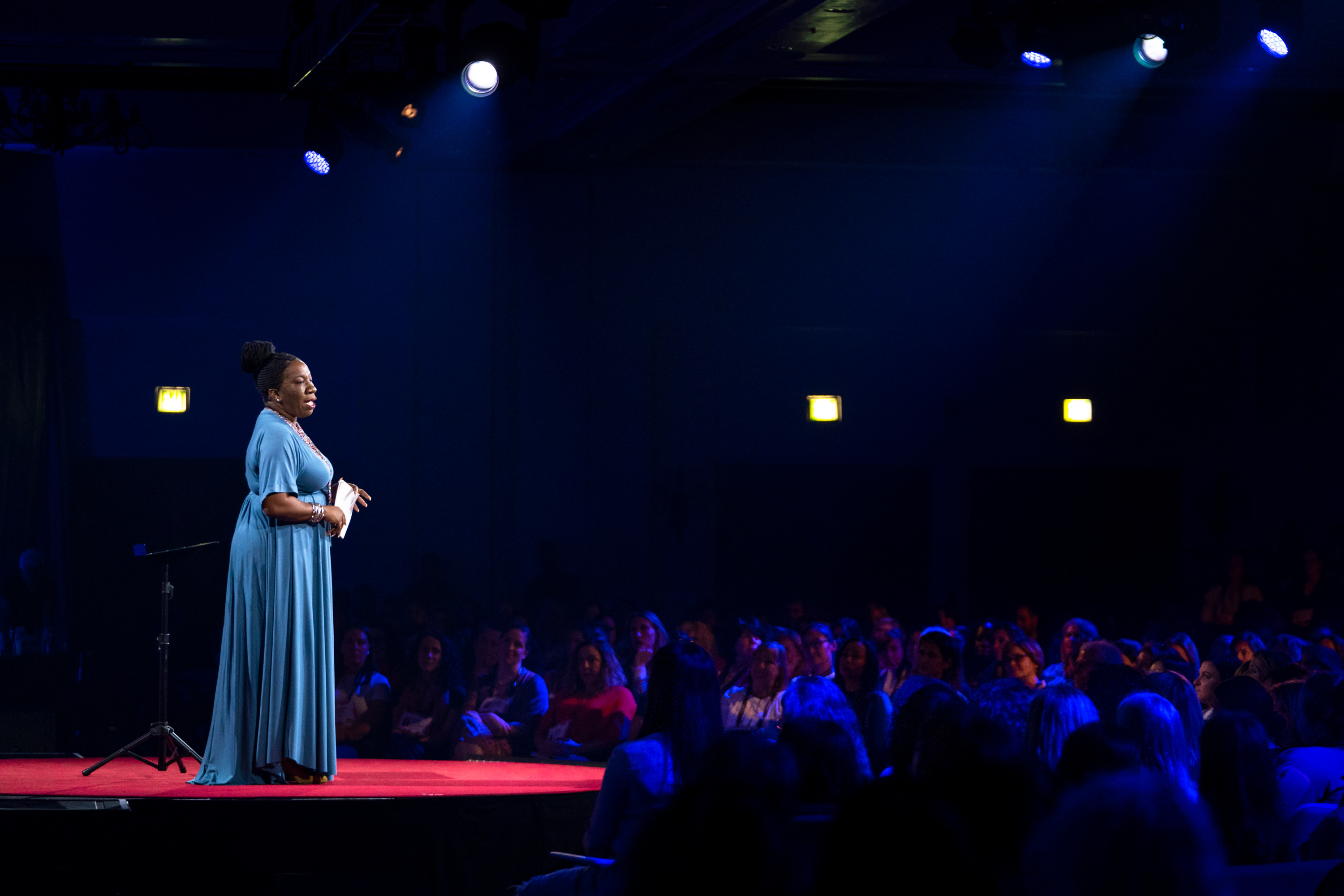 Propelled by possibility, Tarana Burke opens TEDWomen 2018 with a powerful call to action: “We owe future generations nothing less than a world free of sexual violence,” she says. (Photo: Marla Aufmuth / TED)

Women the world over are no longer accepting the status quo. They’re showing up and pushing boundaries. Whatever their focus and talent — business, technology, art, science, politics — pioneers and their allies are joining forces in an explosion of discovery and ingenuity to drive real, meaningful change.

At TEDWomen 2018 — three days of ideas and connections at La Quinta Resort and Club in La Quinta, California — a dynamic and diverse group of leaders, thinkers and people seeking change are facing challenges head-on while empowering us all to shape the future we want to see. The conference kicked off with an electrifying session hosted by TEDWomen curator Pat Mitchell on Wednesday night — with talks and performances by Simona Abdallah, Tarana Burke, Ai-jen Poo, Dolores Huerta, Ashweetha Shetty, Katharine Wilkinson, Marian Wright Edelman and Flor de Toloache.

A rallying beat to show up and be. Percussionist Simona Abdallah opens TEDWomen with a rapturous bang of the darbuka, a drum of Middle Eastern origin traditionally played by men. Beneath a spotlight with eyes closed and face alight with expression, Abdallah fills the room with the crisp, resounding rhythms of her drum. Her passion and talent in percussion has vaulted her over barriers to international success. And as she welcomes the audience to clap along, it feels like an invitation for everyone watching to find the rhythm of their own.

Propelled by possibility. In 2006, Tarana Burke was consumed by a desire to do something about the rampant sexual violence she saw in her community. She took out a piece of paper, wrote “Me Too” across the top and laid out an action plan for a movement centered on the power of empathy between survivors. More than a decade later, she reflects on the state of what has now become a global movement — and makes a powerful call to action to end sexual violence. “We owe future generations nothing less than a world free of sexual violence,” she says. “I believe we can build that world.” Read a full recap of her talk here. 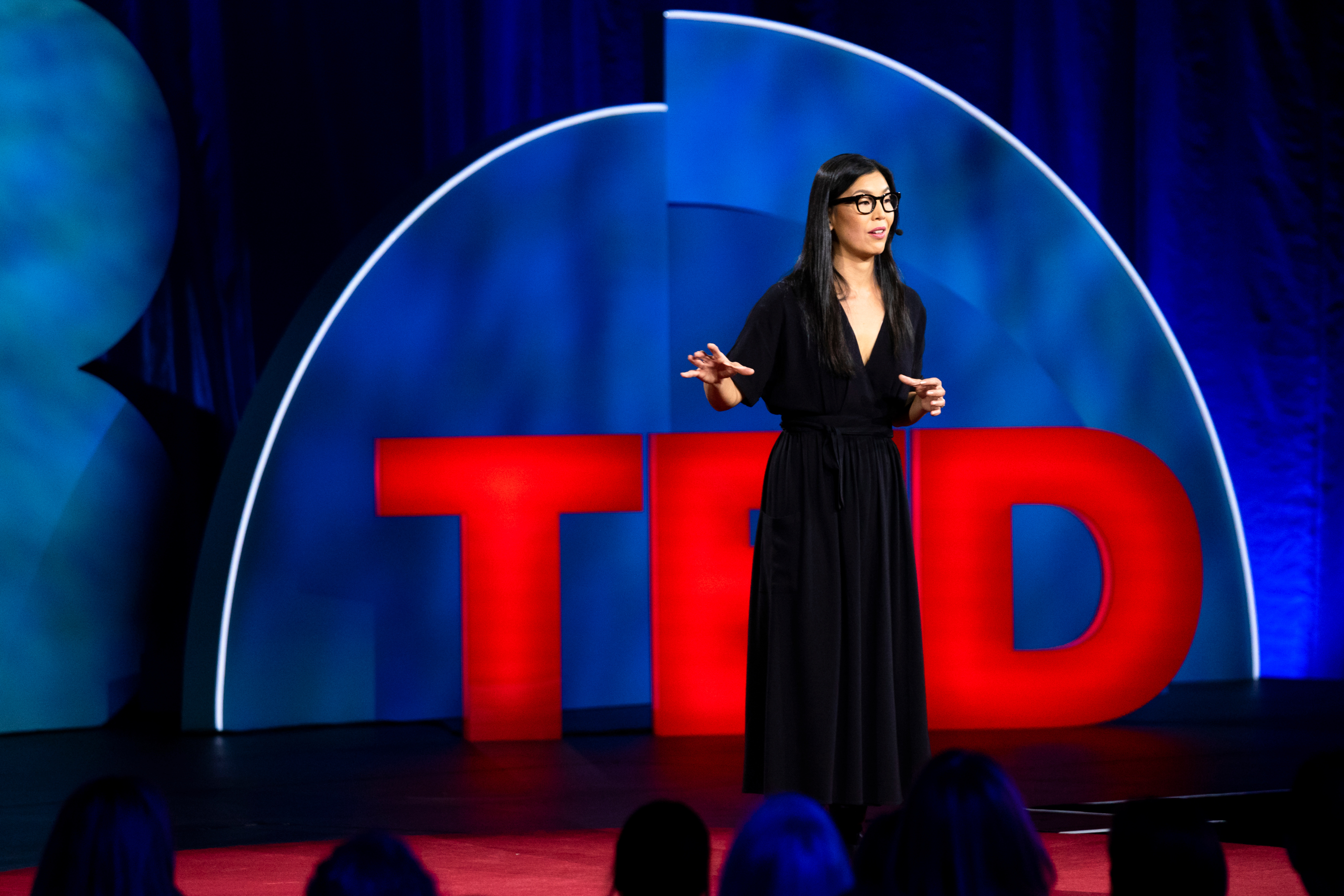 Activist Ai-jen Poo shares her work helping overlooked domestic workers get a chance at a better life — as well as stories from the US-Mexico border, where migrant children are being separated from their families. She speaks at TEDWomen 2018: Showing Up, on November 28, 2018, in Palm Springs. (Photo: Callie Giovanna / TED)

What domestic workers can teach us about creating a more humane world. What is it like to be both absolutely essential and yet completely invisible? What is it like to care for the world’s most treasured humans but not be seen as possessing value of one’s own? These riddles help capture the painful existence of domestic workers — the nannies, cleaners, elder-care attendants and other low-paid laborers to whom many people entrust their loved ones and their homes. Their lack of status is tied to gender and race, as domestic workers are overwhelmingly women of color, says Ai-jen Poo, executive director of the National Domestic Workers Alliance (NDWA). For the past two decades, NDWA has pressed state legislatures to pass laws protecting such employees from discrimination and harassment and granting them basic benefits like paid time off and days of rest. But despite mistreatment and outright abuse, the workers she’s met are unstinting in their devotion to the people they’re hired to nurture, “to care no matter what.” In June 2018, Poo and other allies stood vigil at a border processing center in Texas, where they saw separated migrant children herded onto buses, their hands reaching through the windows for help. She recalls thinking, “If domestic workers were in charge, this never would have happened. Our humanity would never be so disposable that they would be treated this way.” She concludes: “We live in a time of moral choices. Everywhere we turn is full of moral choices, whether it’s at the border, at the ballot box, in our workplaces or in our homes. As you go about your day and you encounter these moral choices … think like a domestic worker who shows up and cares no matter what.”

Can women change the world? “¡Si se puede!” — “Yes we can!” Helen Keller once pointed out that while science has been able to cure many evils, it has found no remedy for the worst human evil of all: apathy. And legendary civil rights activist Dolores Huerta believes that this evil cripples those who should wield the most power: women. Why do so many women become apathetic? Huerta believes that they’re traumatized by aggression, taught to be victims, and are so overwhelmed by their emotive duties that they feel they don’t have the resources to become activists or to make demands of elected officials. But if the world is going to change, women must not only vote, they also must get others to vote — and vote people-centric activists into power. According to Huerta (building on an idea of Coretta Scott King), we will never have peace in the world until feminists take power. “We have power. Poor people have power. Every citizen has power, but in order to achieve the peace that we all yearn for, then we’ve all got to get involved.”

One woman’s story of perseverance. In a powerful personal talk, education advocate Ashweetha Shetty describes how she fought societal assumptions in her rural community in India — and ultimately found purpose creating opportunities for others through her foundation, Bodhi Tree. Throughout her life, Shetty felt boxed into the traditional domestic role assigned to her and other women in her village; she was told that because she was a poor rural girl, she wasn’t worthy of education. But she persisted, defying norms to graduate from college and land a prestigious year-long fellowship in Delhi. Now, she works to empower rural girls to pursue education and reclaim their voices and passions. Through Bodhi Tree, Shetty is determined to help create “a world where a girl like me is no longer a liability or a burden but a person of use, a person of value, a person of worthiness.” 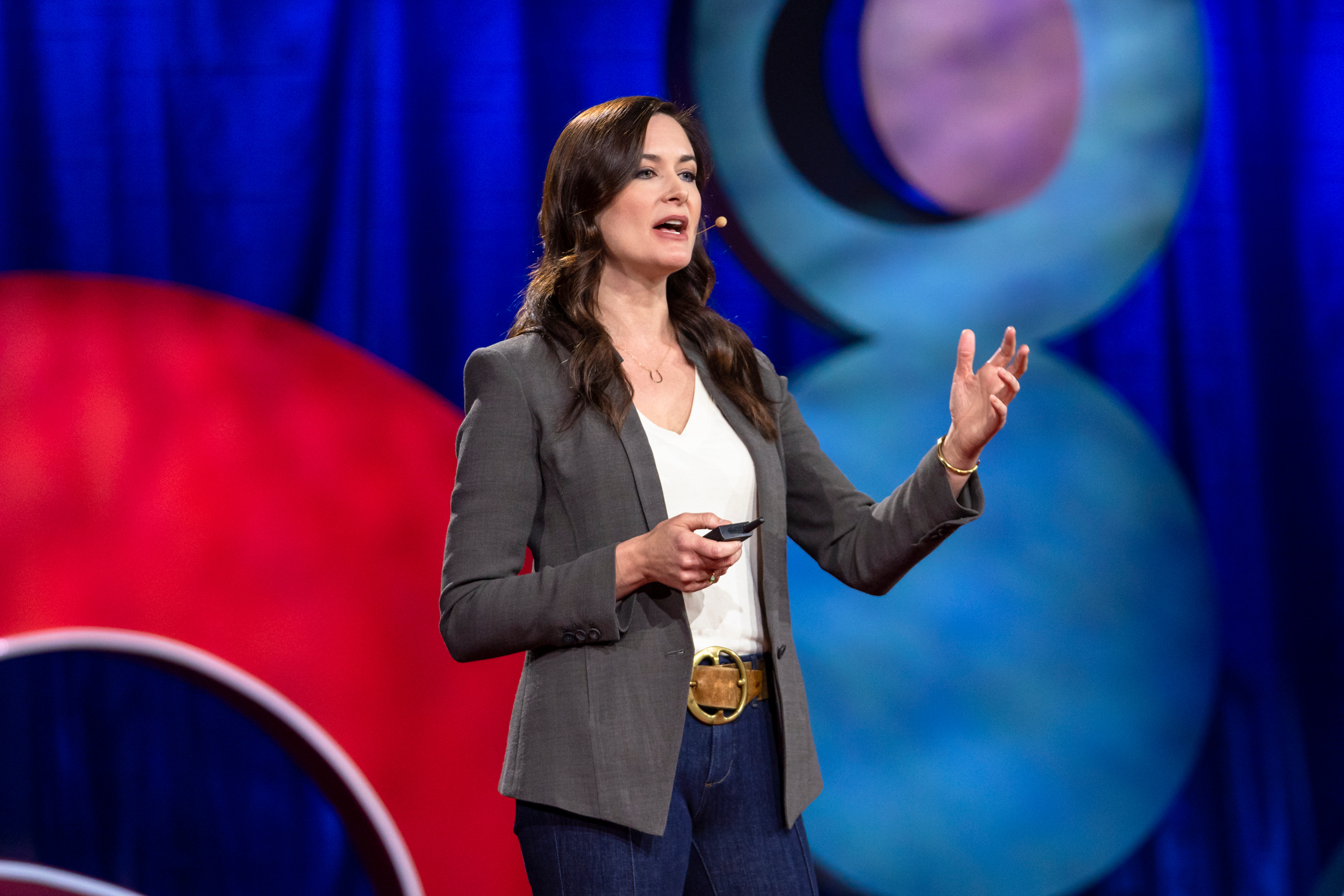 “To address climate change, we must make gender equity a reality,” says Katharine Wilkinson of Project Drawdown. “And in the face of a seemingly impossible challenge, women and girls are a fierce source of possibility.” (Photo: Marla Aufmuth / TED)

Women and girls can heal mother earth. Author and environmentalist Katharine Wilkinson believes in the potential of girls and women to fight climate change — that by rising up to fight, emissions can be brought down. As vice president of communication and engagement at Project Drawdown, Wilkinson has spent the past several years studying how we can reverse global warming — and how climate change disproportionately affects women and girls. But if we can gain ground on gender equity, we also gain ground on addressing global warming. She outlines three key areas to tackle in order to fight global warming and empower women. First, we must support women smallholders — women who grow food on small areas of land with little resources. If we give these women access to better resources, their farm yields could increase by as much as 30 percent. Better farming on smaller plots could cause emissions from deforestation to drop. Wilkinson’s second solution is education. When women and girls are educated, they have more control over their health and finances, as well as the ability to succeed in a climate-changing world, she says. Educated women also marry later in life and have fewer children. Finally, Wilkinson calls for access to voluntary and high-quality reproductive healthcare. Giving more women control over the size of their family may mean one billion fewer people inhabiting Earth in 2050. “We need to break the silence around the condition of our planet,” Wilkinson says. “To address climate change, we must make gender equity a reality. And in the face of a seemingly impossible challenge, women and girls are a fierce source of possibility.”

Passion, purpose and advocacy. Marian Wright Edelman started the Children’s Defense Fund (CDF) 45 years ago. She’s been on the front lines fighting for children ever since. In conversation with Pat Mitchell, Wright Edelman discusses her upbringing in the segregated American South, the beginning of the CDF and how growing older has made her more radical. “God runs a full-employment economy, and if you just follow the need, you’ll never lack for purpose in life,” Wright Edelman says, echoing the call to action she heard her father repeat growing up. After working with Dr. Martin Luther King, Jr., on the Poor People’s Campaign for two years, Wright Edelman started the CDF, and since then the Fund has taken up causes borne out of the experiences Wright Edelman had growing up — things like immunization against preventable diseases and unequal access to education. Now she sees her purpose as drawing attention to injustice wherever it harms children and building a better world for the next generation. “We are not finished,” she says. “We are not ever going to feel finished until we end child poverty in the richest nation on earth.”

Mariachi that will put a spell on you. Named after the Mexican medicinal flower (also known for its use in love potions), Latin Grammy-winning mariachi band Flor de Toloache wrapped the opening session of TEDWomen 2018 with heartfelt music played from the soul. Between songs, the all-female group shared the tale of how they came together in New York City, connected by passion and the desire to create a sound that both celebrates and expands the genre and tradition of mariachi. Their soaring, bilingual vocals and masterful playing brought the stage to life with light, sincerity and spell-binding melodies.