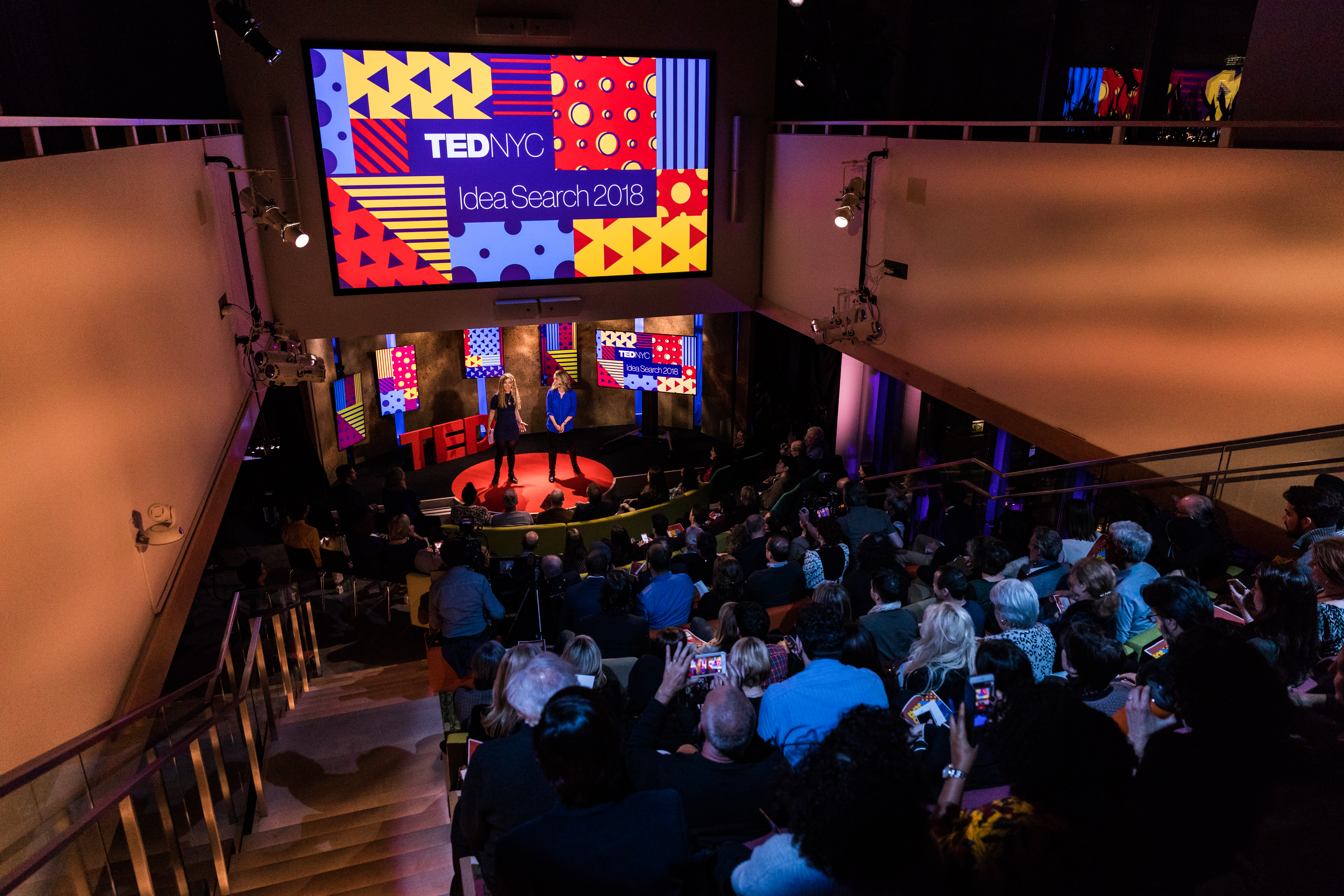 TED is always looking for new voices with fresh ideas — and earlier this winter, we opened a challenge to the world: make a one-minute audition video that makes the case for your TED Talk. More than 1,200 people applied to be a part of the Idea Search program this year, and on Wednesday night at our New York headquarters, 13 audition finalists shared their ideas in a fast-paced program. Here are voices you may not have heard before — but that you’ll want to hear more from soon. 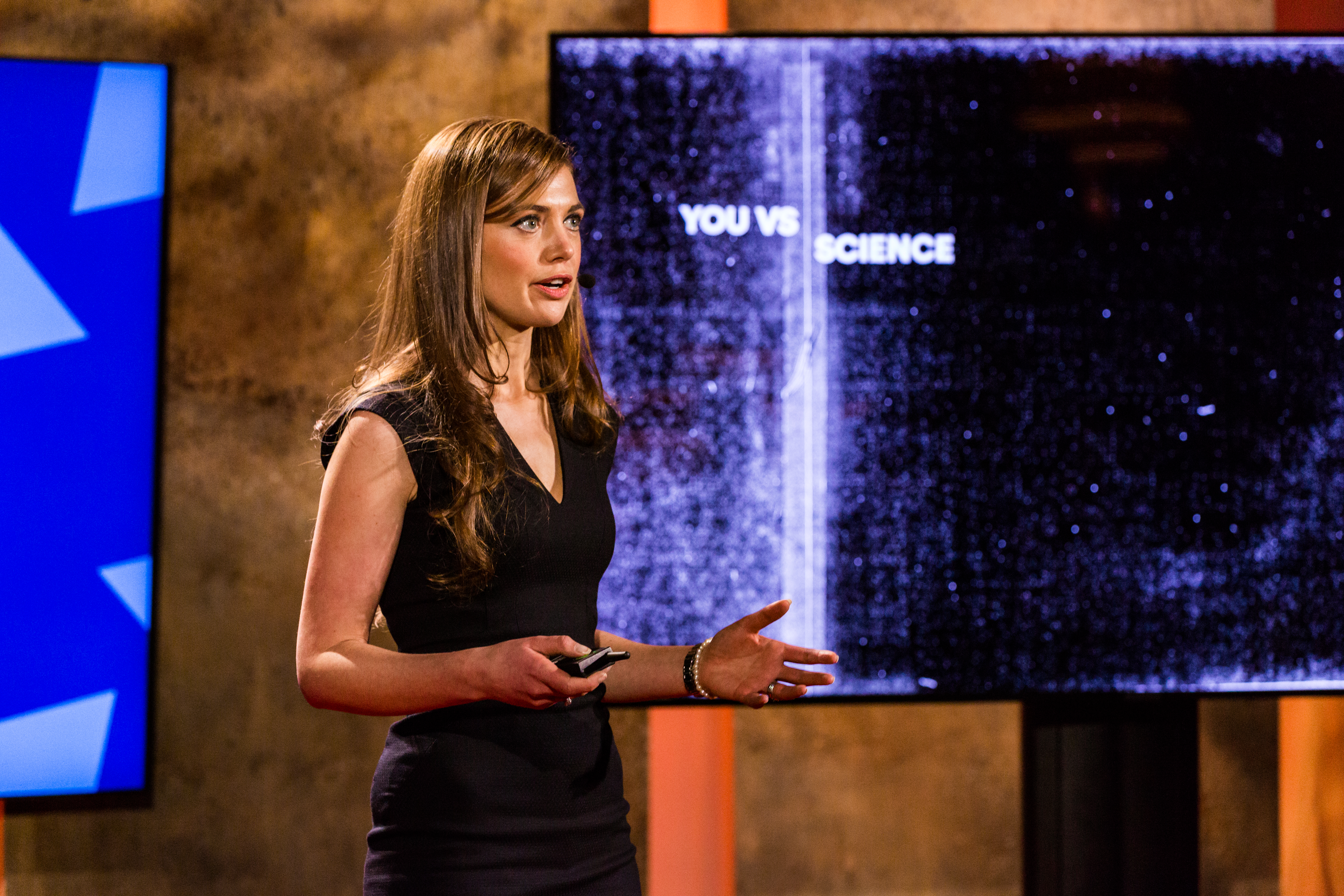 Forensic evidence isn’t as clear-cut as you think. For years, forensic science research has focused on making it easier and more accurate to figure out what a trace — such as DNA or a jacket fiber — is and who it came from, but that doesn’t help us interpret what the evidence means. “What we need to know if we find your DNA on a weapon or gunshot residue on you is how did it get there and when did it get there,” says forensic scientist Ruth Morgan. These gaps in understanding have real consequences: forensic evidence is often misinterpreted and used to convict people of crimes they didn’t commit. Morgan and her team are committed to finding ways to answer the why and how, such as determining whether it’s possible to get trace evidence on you during normal daily activities (it is) and how trace DNA can be transferred. “We need to dramatically reduce the chance of forensic evidence being misinterpreted,” she says. “We need that to happen so that you never have to be that innocent person in the dock.”

The intersection of our senses. An experienced composer and filmmaker, Philip Clemo has been on a quest to determine if people can experience imagery with the same depth that they experience music. Research has shown that sound can impact how we perceive visuals, but can visuals have a similarly profound impact? In his live performances, Clemo and his band use abstract imagery in addition to abstract music to create a visual experience for the audience. He hopes that people can have these same experiences in their everyday lives by quieting their minds to fully experience the “visual music” of our surrounding environment — and improve our connection to our world.

Reading the Bible … without omission. At a time when he was a recovering fundamentalist and longtime atheist, David Ellis Dickerson received a job offer as a quiz question writer and Bible fact-checker for the game show The American Bible Challenge. Among his responsibilities: coming up with questions that conveniently ignored the sections of the Bible that mention slavery, concubines and incest. The omission expectations he was faced with made him realize that evangelicals read the Bible in the same way they watch reality television: “with a willing, even loving, suspension of disbelief.” Now, he invites devout Christians to read the Bible in its most unedited form, to recognize its internal contradictions and to grapple with its imperfections. 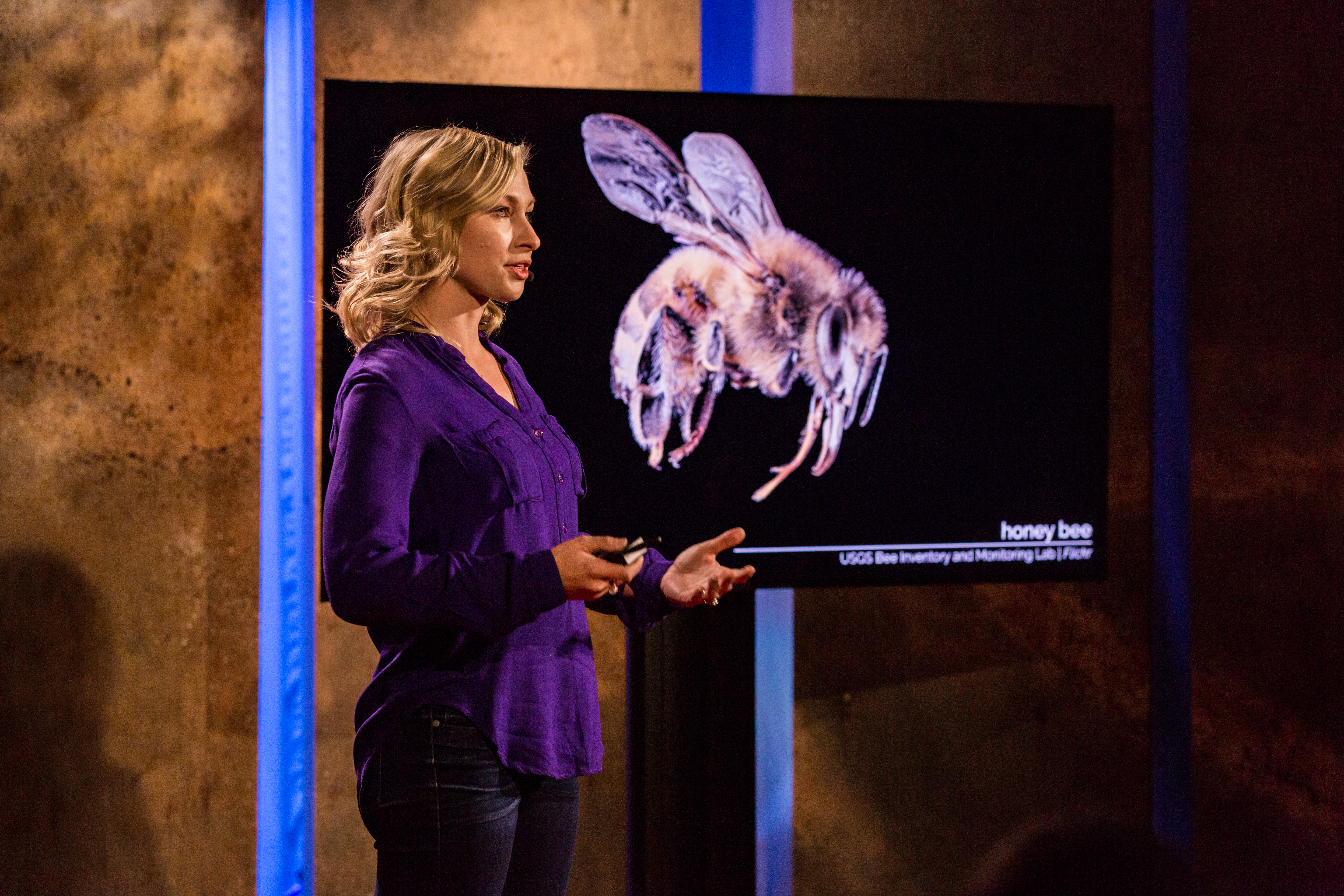 To bee or not to bee? The most famous bee species of recent memory has overwhelmingly been the honey bee. For years, their concerning disappearance has made international news and been the center of research. Environmental designer Danielle Bilot believes that the honey bee should share the spotlight with the 3,600 other species that pollinate much of the food we eat every day in the US, such as blueberries, tomatoes and eggplants. Honey bees, she says, aren’t even native to North America (they were originally brought over from Europe) and therefore have a tougher time successfully pollinating these and many other indigenous crops. Regardless of species, human activity is harming them, and Bilot suggests three simple but productive actions we can take to make their lives easier and revive their populations: plant flowers that bloom year-round, leave bare areas of soil for bees to nest in, and plant flower patches so that bees can more easily locate food.

What if technology protected your hearing? Computers that talk to us and voice-enabled technology like Siri, Alexa and Google Home are changing the importance of hearing, says ear surgeon Matthew Bromwich. And with more than 500 million people suffering from disabling hearing loss globally, the importance of democratizing hearing health care is more relevant than ever. “How do we use our technology to improve the clarity of our communication?” Bromwich asks. He and his team have created a hearing testing technology called “SHOEBOX,” which gives hearing health care access to more than 70,000 people in 32 countries. He proposes using technology to help prevent this disability, amplify sound clarity, and paint a new future for hearing.

Welcome to the 2025 Technology Design Awards, with your host, Tom Wujec. Rocking a glittery dinner jacket, design guru Tom Wujec presents a science-fiction-y awards show from eight years into the future, honoring the designs that made the biggest impact in technology, consumer goods and transportation — capped off by a grand impact award chosen live onstage by an AI. While the designs seem fictional — a hacked auto, a self-rising house, a cutting-edge prosthetic — the kicker to Tom’s future award show is that everything he shows is in development right now. 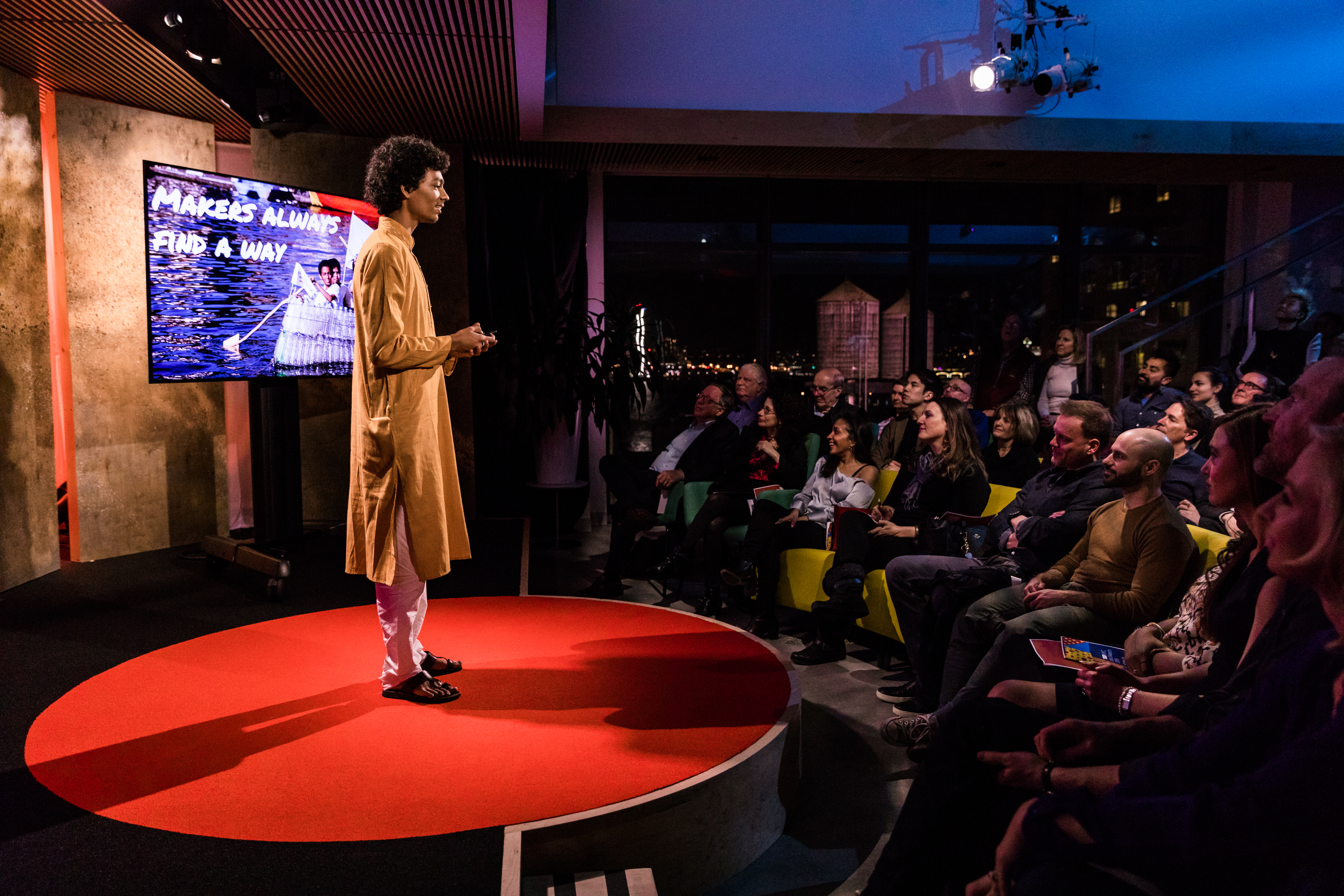 In collaboration with the MIT Media Lab, Nilay Kulkarni used his skills as a self-taught programmer to build a simple tech solution to prevent human stampedes during the Kumbh Mela, one of the world’s largest crowd gatherings, in India. (Photo: Ryan Lash / TED)

A 15-year-old solves a deadly problem with a low-cost device. Every four years, more than 30 million Hindus gather for the Kumbh Mela, the world’s largest religious gathering, in order to wash themselves of their sins. Once every 12 years, it takes place in Nashik, a city on the western coast of India that ordinarily contains 1.5 million residents. With such a massive crowd in a small space, stampedes inevitably happen, and in 2003, 39 people were killed during the festival in Nashik. In 2014, then-15-year-old Nilay Kulkarni decided he wanted to find a solution. He recalls: “It seemed like a mission impossible, a dream too big.” After much trial and error, he and collaborators at the MIT Media Lab came up with a cheap, portable, effective stampede stopper called “Ashioto” (meaning footstep in Japanese): a pressure-sensor-equipped mat which counts the number of people stepping on it and sends the data over the internet to authorities so they can monitor the flow of people in real time. Five mats were deployed at the 2015 Nashik Kumbh Mela, and thanks to their use and other innovations, no stampedes occurred for the first time ever there. Much of the code is now available to the public to use for free, and Kulkarni is trying to improve the device. His dream: for Ashiotos to be used at all large gatherings, like the other Kumbh Melas, the Hajj and even at major concerts and sports events.

A new way to think about health care. Though doctors and nurses dominate people’s minds when it comes to health care, Tamekia MizLadi Smith is more interested in the roles of non-clinical staff in creating in creating effective and positive patient experiences. As an educator and spoken word poet, Smith uses the acronym “G.R.A.C.E.D.” to empower non-clinical staff to be accountable for data collection and to provide compassionate care to patients. Under the belief that compassionate care doesn’t begin and end with just clinicians, Smith asks that desk specialists, parking attendants and other non-clinical staff are trained and treated as integral parts of well-functioning health care systems.

Mad? Try some humor. “The world seems humor-impaired,” says comedian Judy Carter. “It just seems like everyone is going around angry: going, ‘Politics is making me so mad; my boss is just making me so mad.'” In a sharp, zippy talk, Carter makes the case that no one can actually make you mad — you always have a choice of how to respond — and that anger actually might be the wrong way to react. Instead, she suggests trying humor. “Comedy rips negativity to shreds,” she says.

Want a happier, healthier life? Look to your friends. In the relationship pantheon, friends tend to place third in importance (after spouses and blood relatives). But we should make them a priority in our lives, argues science writer Lydia Denworth. “The science of friendship suggests we should invest in relationships that deliver strong bonds. We should value people who are positive, stable, cooperative forces,” Denworth says. While friendship was long ignored by academics, researchers are now studying it and finding it provides us with strong physical and emotional benefits. “In this time when we’re struggling with an epidemic of loneliness and bitter political divisions, [friendships] remind us what joy and connection look like and why they matter,” Denworth says.

An accessible musical wonderland. With quick but impressive musical interludes, Matan Berkowitz introduces the “Airstrument” — a new type of instrument that allows anyone to create music in a matter of minutes by translating movement into sound. This technology is part of a series of devices Berkowitz has developed to enable musicians with disabilities (and anyone who wants to make music) to express themselves in non-traditional ways. “Creation with intention,” he raps, accompanied by a song created on the Airstrument. “Now it’s up to us to wake up and act.” 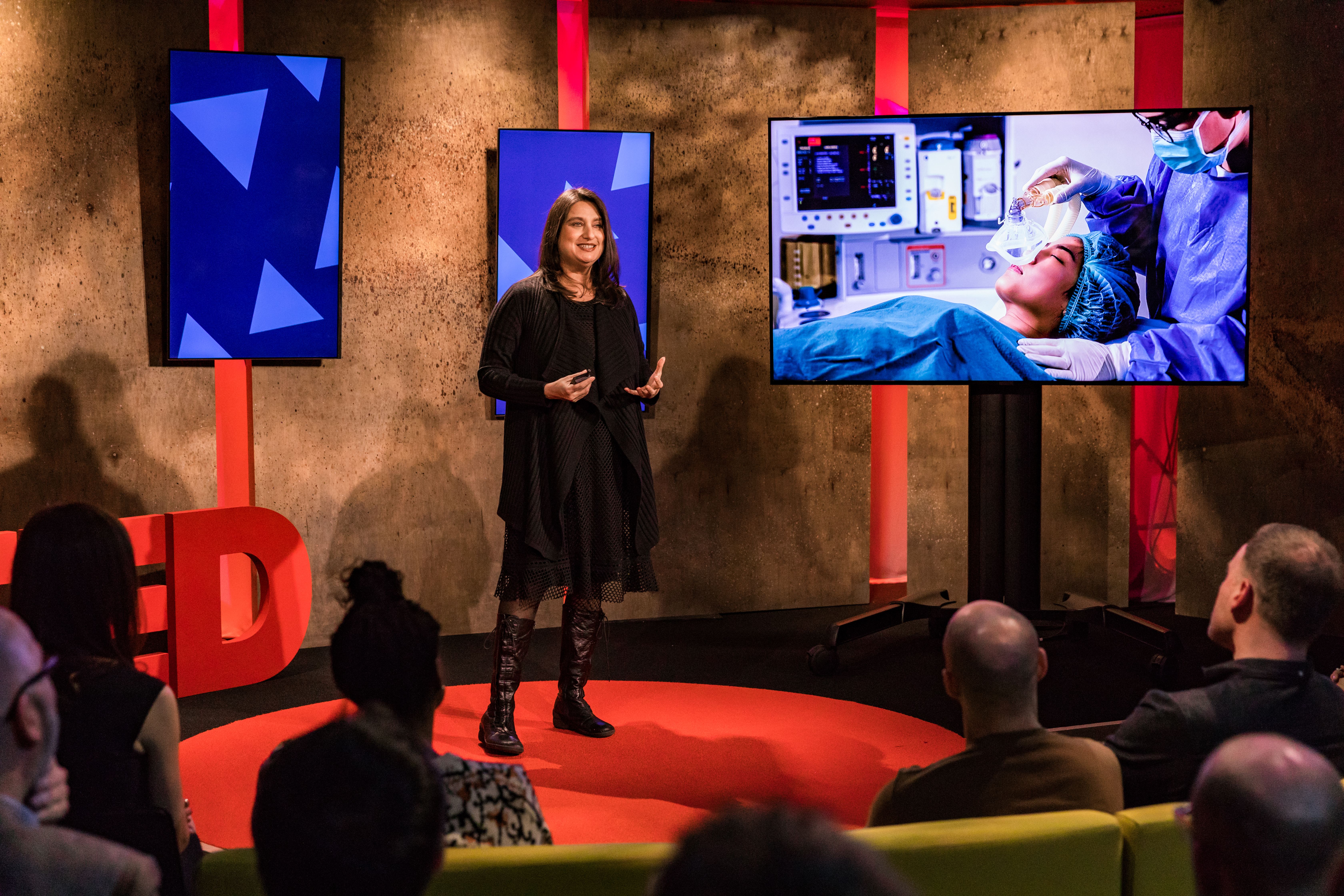 Where does consciousness go when you’re under anesthesia? Divya Chander is an anesthesiologist, delivering specialized doses of drugs that put people in an altered state before surgery. She often wonders: Where do peoples brains do while they’re under? What do they perceive? The question has led her into a deeper exploration of perception, awareness and consciousness itself. In a thoughtful talk, she suggests that we have a lot to learn about consciousness … that we could learn by studying unconsciousness.

The art of creation without preparation. To close out the night, vocalist and improviser Lex Empress creates coherent lyrics from words written by audience members on paper airplanes thrown onto the stage. Empress is accompanied by virtuoso pianist and producer Gilian Baracs, who also improvises everything he plays. Their music reminds us to enjoy the great improvisation that is life.