The world is changing faster than ever, bringing with it brand-new problems, while our most persistent troubles — like poverty and health — haven’t gone anywhere. One thing has become abundantly clear: our machines aren’t going to save us; people are. How do we respond to problems new and old with humanity and dignity?

In the moving third session of TED2017, hosted by TED’s Head Curator Chris Anderson and Content Director Kelly Stoetzel, eight speakers tackled subjects from the future of work to the future of creativity to the revolutionary act of self-care, and much more.

Below, recaps of the talks from Session 3, in chronological order.

The universal need for basic income. What can be done about poverty? Often, poverty is tackled through a symptomatic approach rather than by treating the underlying cause. For historian Rutger Bregman, the solution to poverty is simple: universal basic income. We should change the context in which poor people live by giving everyone a monthly allowance to pay for basic needs. This idea is more than five hundred years old, first introduced by Thomas More in Utopia and, Bregman says, it’s proven to be successful. In 1974, an experiment in Dauphin, Canada, showed how basic income could allow everyone to not only survive but thrive. According to Bregman, a basic income in the United States would cost $175 billion, just a quarter of the US’s military budget. And universal basic income impacts the future of work itself — it’s a complete rethink of what “work” actually is. Ultimately, Bregman believes in a “future where the value of your work is not determined by the size of your paycheck, but by the amount of happiness you spread and the amount of meaning you give.”

Will we have jobs in the future? In 1964, US President Lyndon B. Johnson received a memo that warned, among other things, of the threat of automation. On the TED stage, futurist Martin Ford brings up this obscure bit of history to prove that this concern has been around for a long time. But something is different this time around: machines are increasingly able to learn and adapt. “Technology is finally beginning to encroach on that fundamental human capability that has allowed people to stay ahead,” he says. All kinds of jobs will soon be at risk — both white-collar and blue-collar alike. This presents a fundamental problem: “In order to have a vibrant market economy, you need lots of consumers,” says Ford. Read a full recap of Martin Ford’s talk. 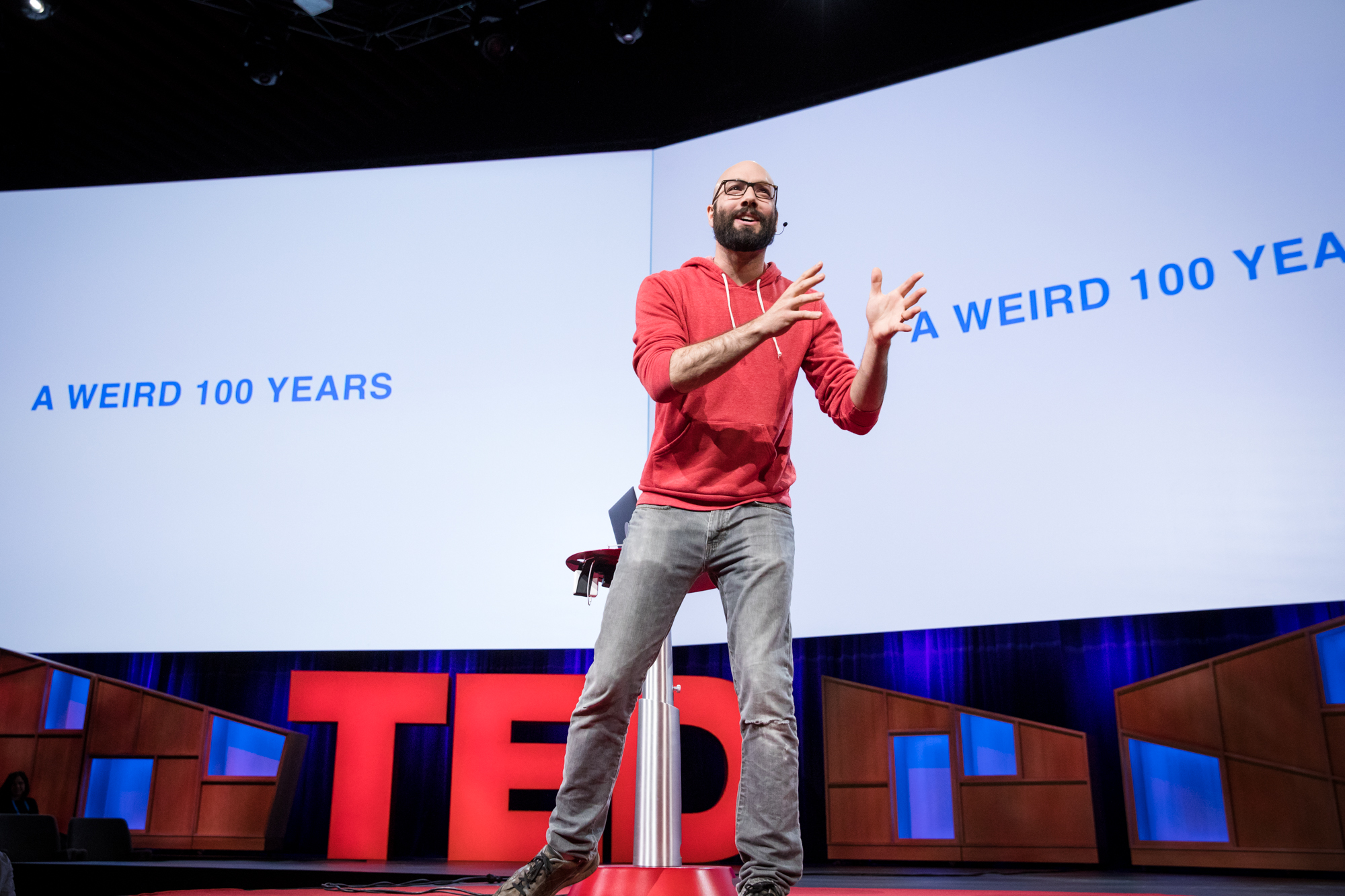 Musician Jack Conte, the founder of Patreon, imagines a future where being a creator also means getting paid. He speaks at TED2017, April 25, 2017, Vancouver, BC, Canada. Photo: Bret Hartman / TED

Getting creators paid. Back in 2007, Jack Conte had just finished an album that he poured his heart and soul into, posted it on MySpace … and saw 3 views per day. It was the dawn of a new age, when creators were exploring new ways to distribute — and get paid for — their art on the internet. So Conte took his art to YouTube and iTunes, and soon he was making enough money to buy a house. But business models were changing all the time, and when online streaming replaced downloads, Conte’s earnings bottomed out. The whole machine that took art online and output money had become nonfunctional — for newspapers, for magazines and for creators. “It’s been a weird 100 years,” Conte says reflectively. Just a century ago, with the advent of phonographs and photographs, humans became able to store art in physical form, and these inventions spawned billions of dollars in infrastructure to help artists share their art. But over the last decade, the internet matured and allowed whole systems of distribution to be bypassed. Four years ago, Conte had an idea: a membership platform that lets creators get paid by their fans on a monthly basis. Now known as Patreon, the platform supports more than 50,000 creators who make salary-type money for creating their art — from music to shows to sports journalism. “There’s a bubbling soup of ideas pointing in the direction of getting creators paid,” Conte says. “We’re figuring it out … soon, creators are going to be a viable and respected occupation.” 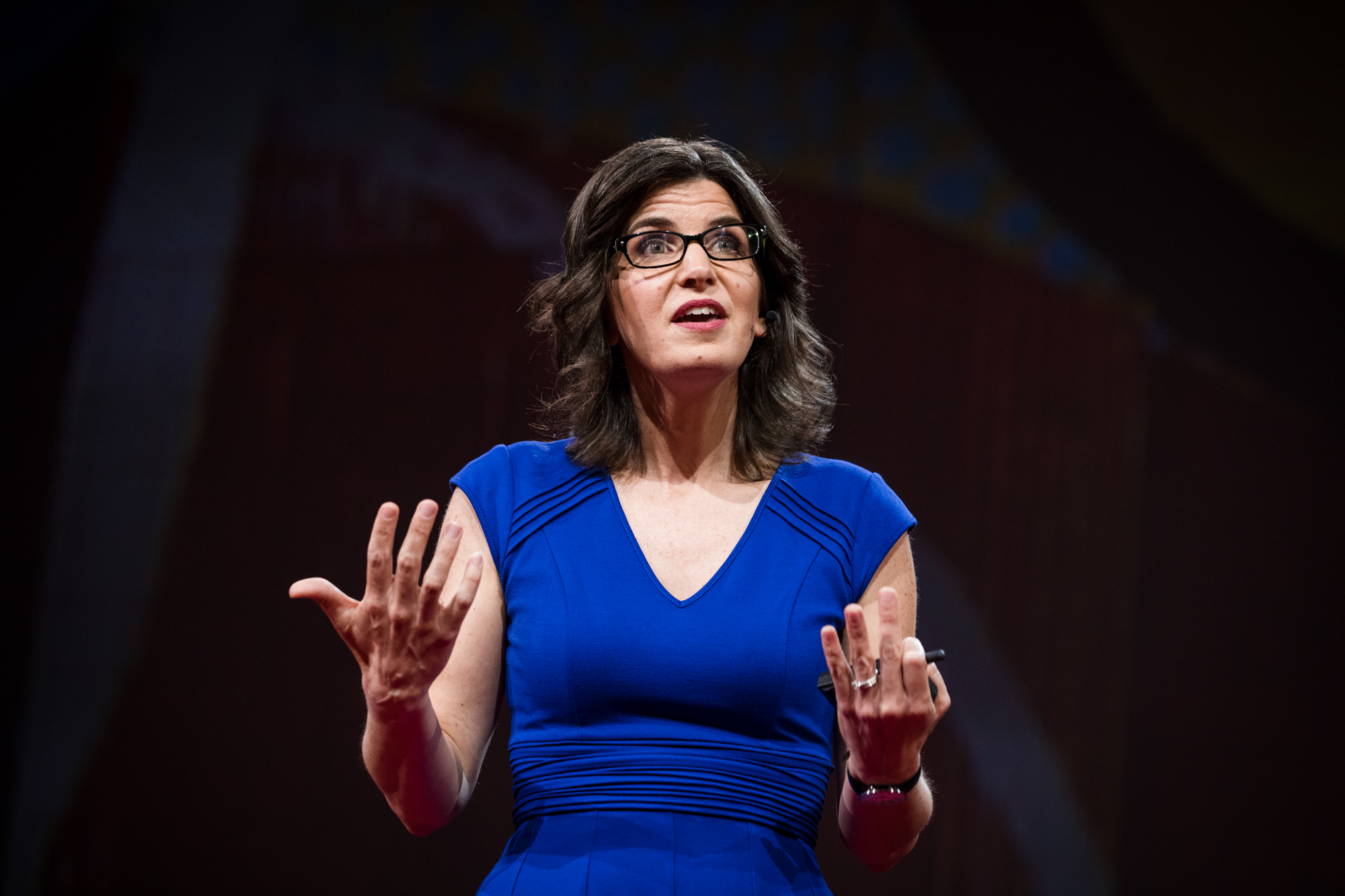 Give screens a chance. When we pass our child a phone or let them play a game on our tablet, we may feel guilty, worrying the screens we’ve just handed over are too passive, distracting and isolating. Sara DeWitt thinks we’ve got this all wrong. For the past 18 years, she’s been working to find ways to connect kids with technology, and she thinks that screens can actually be positive tools for development, providing opportunities for growth and connection. When she helped create a video game that transformed kids’ movements into the flapping wings of a bat, she found that “the digital technology prompted embodied learning that kids can now take out into the world.” They can engage families by informing parents on their childrens’ game progress and prompting parents to ask followup questions. And they even can be used as a metric for academic progress. While there certainly needs to be limits, DeWitt encourages us to expect more from our technology.

Radical transparency is “the secret sauce” to success. So says Ray Dalio, who has achieved immense success as the founder, chair and co-CIO of Bridgewater Associates, the largest hedge fund in the world. But Dalio didn’t find that success until he hit rock bottom in the mid-1980s after making a losing bet on the stock market that forced him to let almost all his employees go. “I was an arrogant jerk!” admits Dalio. So he shifted his attitude: “Rather than thinking ‘I’m right,’ I started asking, ‘How do I know I’m right?’ I gained the humility I needed to balance my audacity.” After seeing how he singlehandedly brought his company to the brink of ruin, he resolved to turn it into an “idea meritocracy in which the best ideas would win out.” Soon, he realized two other practices had to be added to the mix — radical truthfulness and radical transparency. For the past 25 years at Bridgewater Associates, conversations are recorded for all employees to listen to. Staffers, from the lowest-ranking to Dalio himself, candidly assess each of their colleagues during every meeting and interaction, and they can see the entire group’s assessments of everyone as well. The ratings are collected and analyzed using algorithms to learn why and how people see things differently. It’s also used to identify each individual’s strengths and weaknesses, and to figure out how they can best collaborate with one another. This kind of open, transparent, data-driven workplace harnesses the power of group decision-making so that the most effective solutions and approaches prevail, Dalio believes. “One of the greatest tragedies of mankind is people arrogantly, naively holding opinions that are wrong and not putting them out there to stress-test.” Those tragedies — whether on a professional or a personal level — do not have to be inevitable. 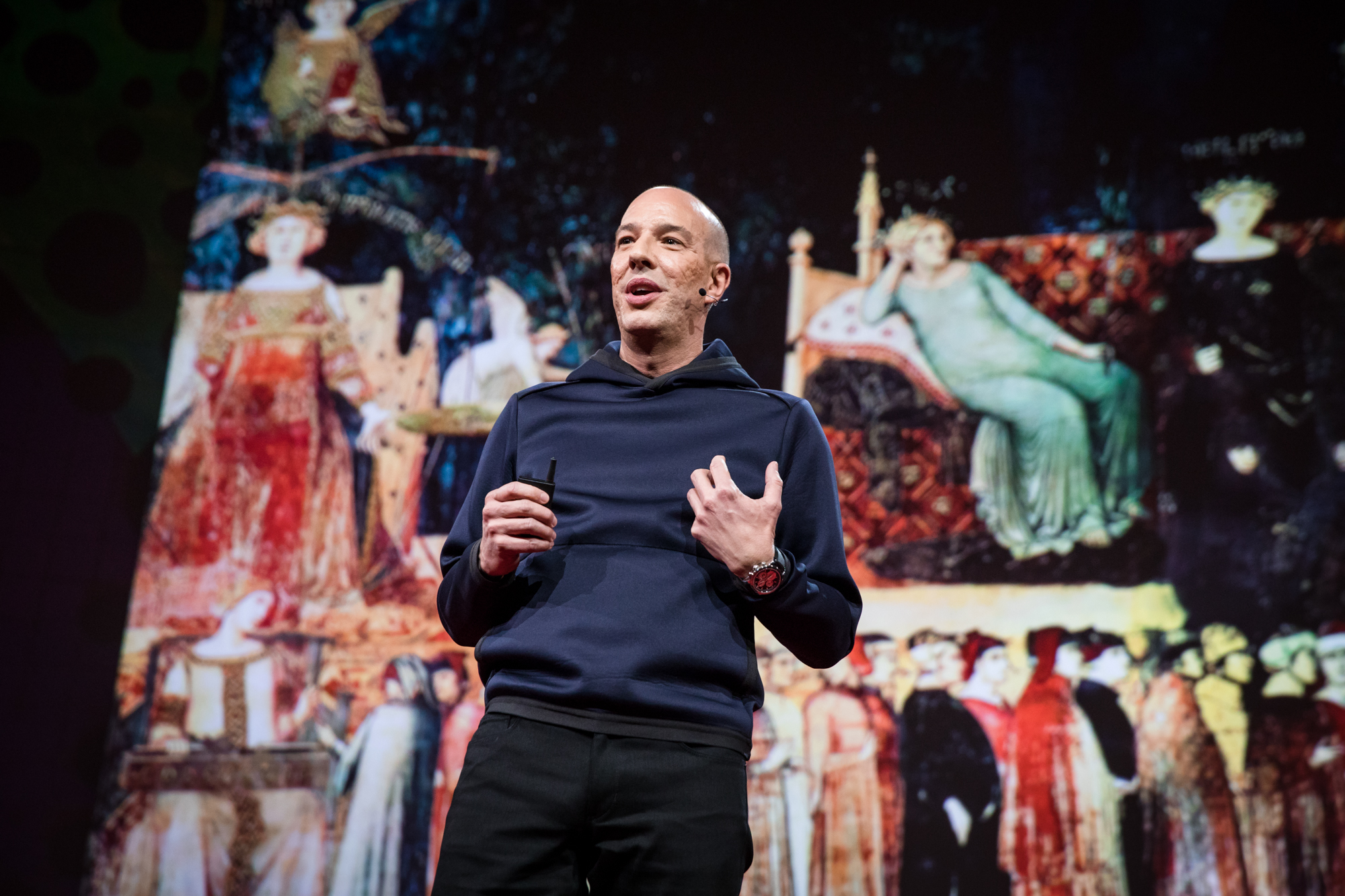 An urgent call to action — from a 14th-century fresco. The greatest disruption of the past few years didn’t come out of Silicon Valley — it came from the 2016 US presidential election, which disrupted lives, marriages and families. Since then, we’ve all searched high and low for understanding, mining everything from data to political philosophy. But for Anthony D. Romero, director of the American Civil Liberties Union, understanding came in the form of a fresco, The Allegory of Good and Bad Government, by 14th-century Italian master Ambrogio Lorenzetti. Taking us on the tour of the room-sized painting, Romero draws striking parallels between what was thought of as good and bad government in medieval Siena and the modern political landscape. “Lorenzetti warns us that we must recognize the shadows of tyranny when they float across our political landscape,” says Romero — a warning, he says, that we don’t need to just hear but act upon. “The right to protest, the right to assemble freely, the right to petition one’s government. These are not just rights,” he says: “In the face of avarice, fraud and division, these are obligations.” 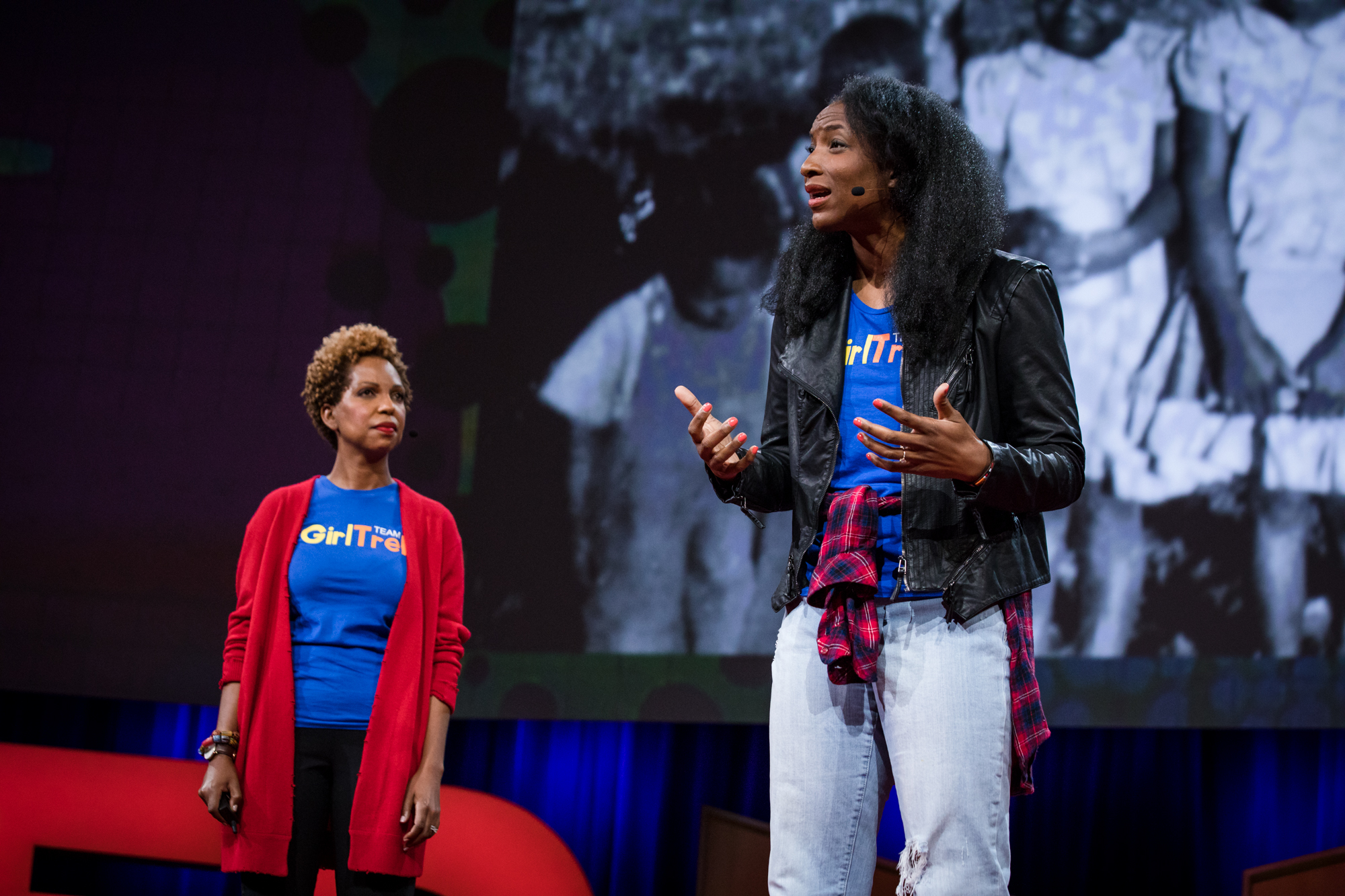 Walking in the footsteps of a legacy. Invoking the name of their ancestors in prayer on stage, health activists T. Morgan Dixon and Vanessa Garrison want women to get out and take a walk. The duo founded GirlTrek, the largest health nonprofit for African American women, demonstrating the true power and progress of putting one foot in front of the other. Why? Because every day in the US, the equivalent of a jet full of black women die from preventable diseases –“bodies buckling under the weight of a system that was never designed for them,” Garrison says. Inspired by the civil rights movements that came before them, GirlTrek draws on the spirit, fire and passion of Harriet Tubman and the many leaders who followed her path. By rallying women across the country to walk, Dixon and Garrison engage them in one of the single most powerful things a woman can do for herself as a radical act of self-care. As Garrison says: “Walking to be healthy enough to stand at the front lines of change.”