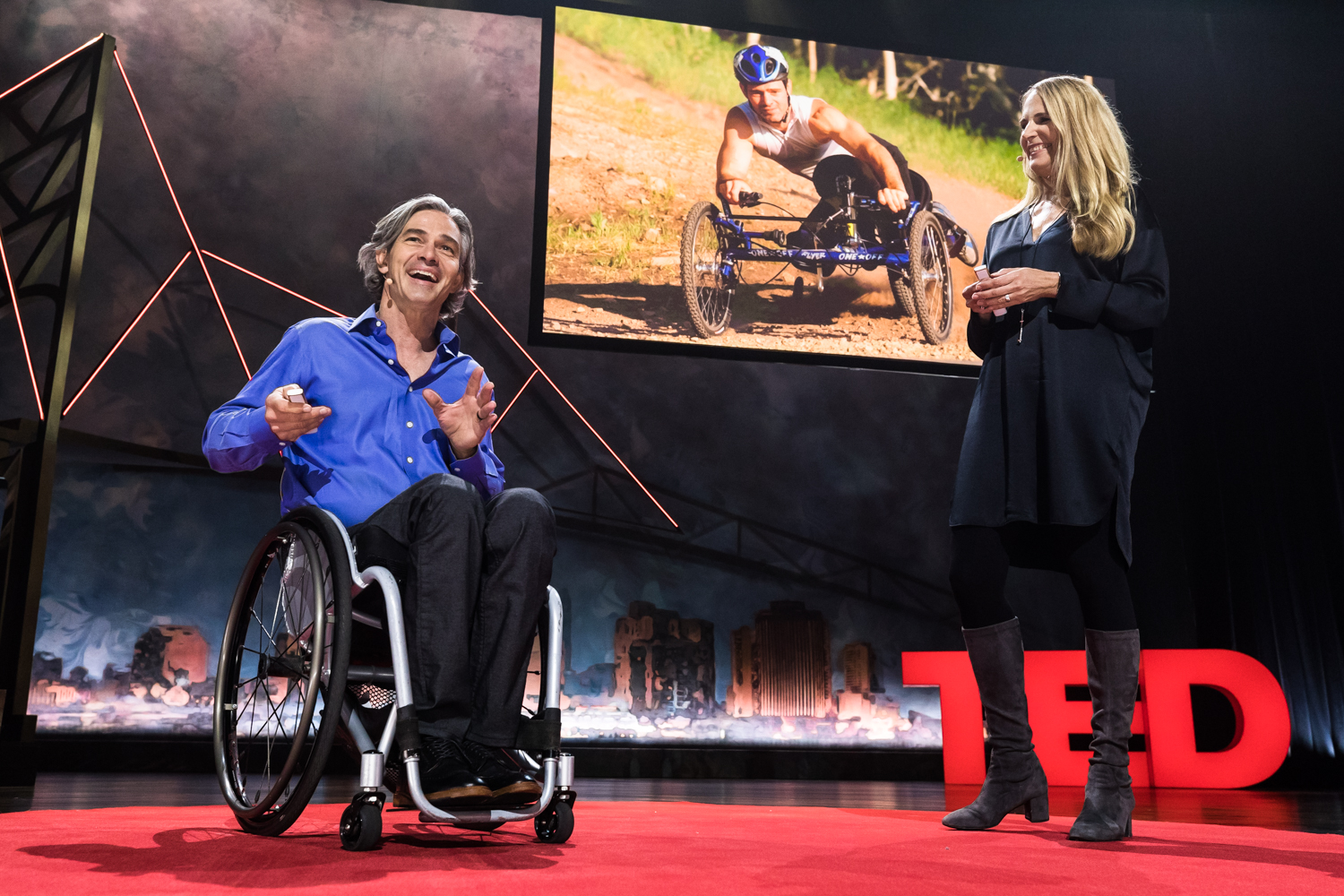 Life partners Chris Waddell and Jean Oelwang are hosts of Session 3, an exploration of partnerships. They kick off the session at TEDWomen 2017 in New Orleans. Photo: Ryan Lash / TED

Our hosts for this session, Jean Oelwang and Chris Waddell, are life partners who’ve both had to overcome their inclination to be a solo superhero — to be the best at business, school, sports. Jean spent her career climbing the corporate ladder, being tough, making her way to the top alone. Meanwhile, Chris was a skiier who, early in his own career, faced what could be a devastating setback when his ski popped off during a turn, leaving him paralyzed from the waist down. He went on to become a world-champion monoskier, setting Paralympic history. He kicks off this session with his story of a quest to summit Mt. Kilimanjaro solo on his handcycle. On the way, he found that, maybe, going solo wasn’t the real goal at all. Building from this story, Session 3 unfolds … 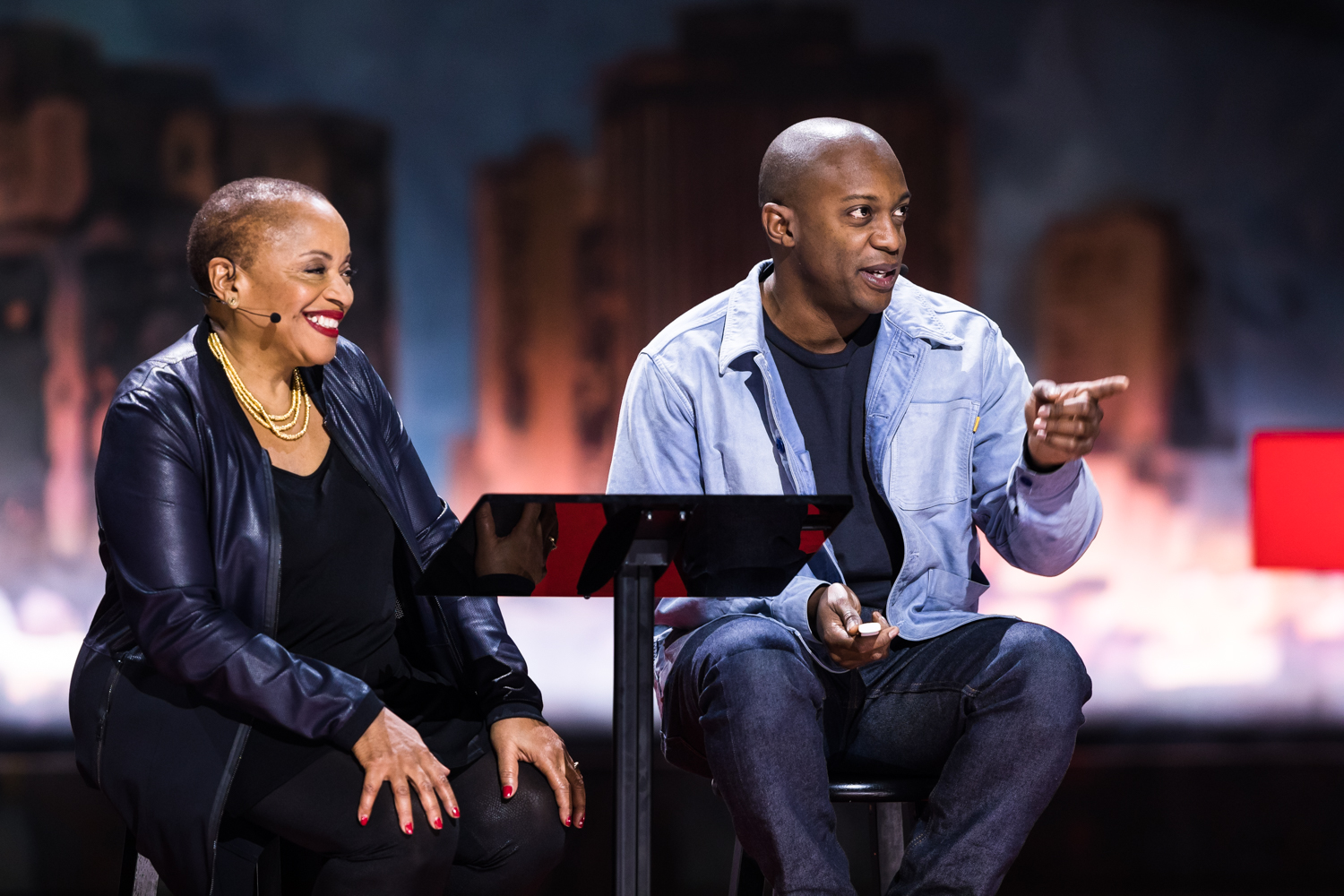 Love overrules: Deborah Willis and Hank Willis Thomas are photographers. They are also mother and son. Deborah, told by her photography professor that she was intended for motherhood and not the art world, responded by giving birth to Hank, working the pregnancy into her pictures, and launching into a storied career as a photographer, curator and writer. Growing up in a house full of pictures, Hank also picked up a camera early in life. Their subsequent work has always drawn from what they characterize as a symbiotic relationship defined by abiding love. “Through her actions,” Hanks says of his mother, “she has shown me that love is an action, not a feeling … a way of listening and a way of seeing.” Love–as it relates to family, community, race, identity, notions of truth–has remained a throughline that pierces their efforts to highlight stories that diverge from mainstream narratives about black life. Pondering the reason behind her decision to make photography and love the twin foundations of her professional life, Deborah comes to a conclusion: “Because of the lack of images that circulate in the public about black love and black joy.” Watching this duo onstage provides both.

A textbook for racial literacy. Growing up, Winona Guo and Priya Vulchi thought they understood racism. “We had experienced and heard stories about race, about prejudice, discrimination and stereotyping, and we were like, ‘we get it, racism!’” says Vulchi. “But we weren’t even close,” says Guo. The two friends, then seniors in high school, decided they needed to learn more — so they took a trip to collect hundreds of personal stories about race. Using those stories, Guo and Vulchi highlight the two fundamental gaps they discovered in our racial literacy: the heart gap and the mind gap. One, an inability to understand each of our experiences and be compassionate beyond lip service, and the other, an inability to understand the larger systemic ways racism operates. To bridge those gaps, Guo and Vulchi co-created a textbook, The Classroom Index, that pairs personal stories with statistics. “We need to raise the bar, elevate our standards for racial literacy, because without investing in an education that values both the story and the statistic, the people and the numbers, the interpersonal and the systemic, there will always be a piece missing,” they say. 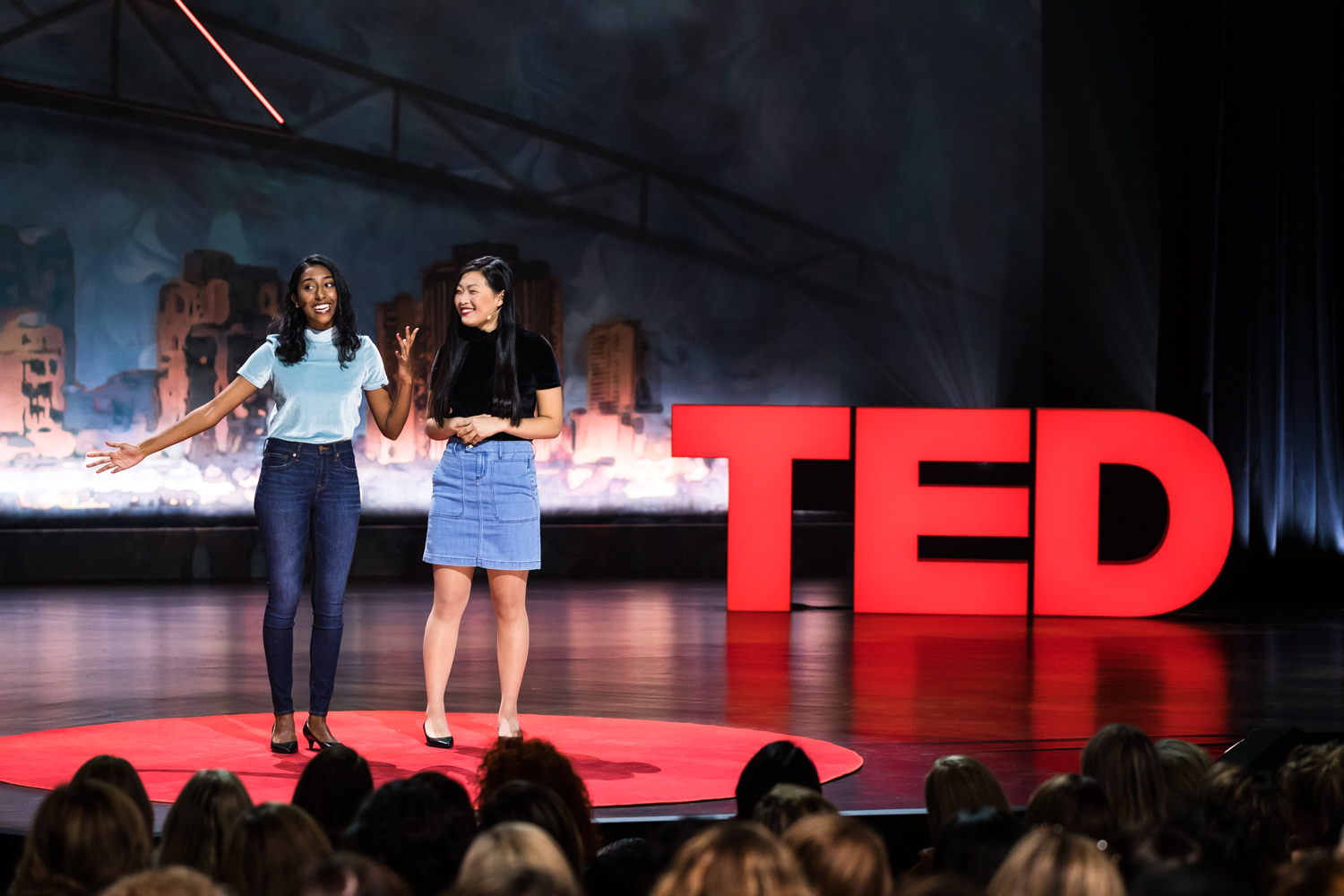 The summer they finished high school, Priya Vulchi and Winona Guo hit the road to explore American attitudes toward racism — and wrote a textbook to help young people like them understand what it really means right now. They speak together at TEDWomen 2017. Photo: Stacie McChesney / TED

The defining moments of our lives. On one awful night, Ples Felix’s grandson, a young teenager, murdered Azim Khamisa’s son, a college student, in a robbery gone wrong, fueled by drugs, alcohol and a false sense of belonging. The deadly encounter of these two young men sent Khamisa and Felix down paths of deep meditation to forgive and to be forgiven — and in act of bravery and reconciliation, the two men met and forged a lasting bond. “Sometimes in deep trauma and deep tragedy, there is a spark,” says Khamisa, in meeting Felix’s grandson, Tony, and connecting with the humanity and humility he witnessed. Together, Khamisa and Felix have used their story as an outline for a better, more merciful society where victims of tragedy can grow with one another and heal — highlighted by the heartfelt news they shared on the TEDWomen stage. As a testament to their enduring relationship and combined efforts to spread the message of peace over the last 12 years, Tony will be released from prison. “Peace is possible,” says Khamisa. “How do I know that? Because I am at peace.”

Sisterhood in three scenes. Felice Belle and Jennifer Murphy, two self-proclaimed sisters in heart and thought, took the TEDWomen stage in a captivating, poetic journey through their friendship. Lives lived apart and together, weaved with laughter and dancing between tragedy and delight, Belle and Murphy lovingly recalled memories and moments that solidified their sisterhood from the day they first became to now. “There are moments that bond,” says Belle. “When there is no train, no car service, no bus, my sister will walk miles just to be by my side.” Together, they recite. “When a sister loves a sister, you listen to her read, thinking: as heaven to the gods is poetry to the beloved.” 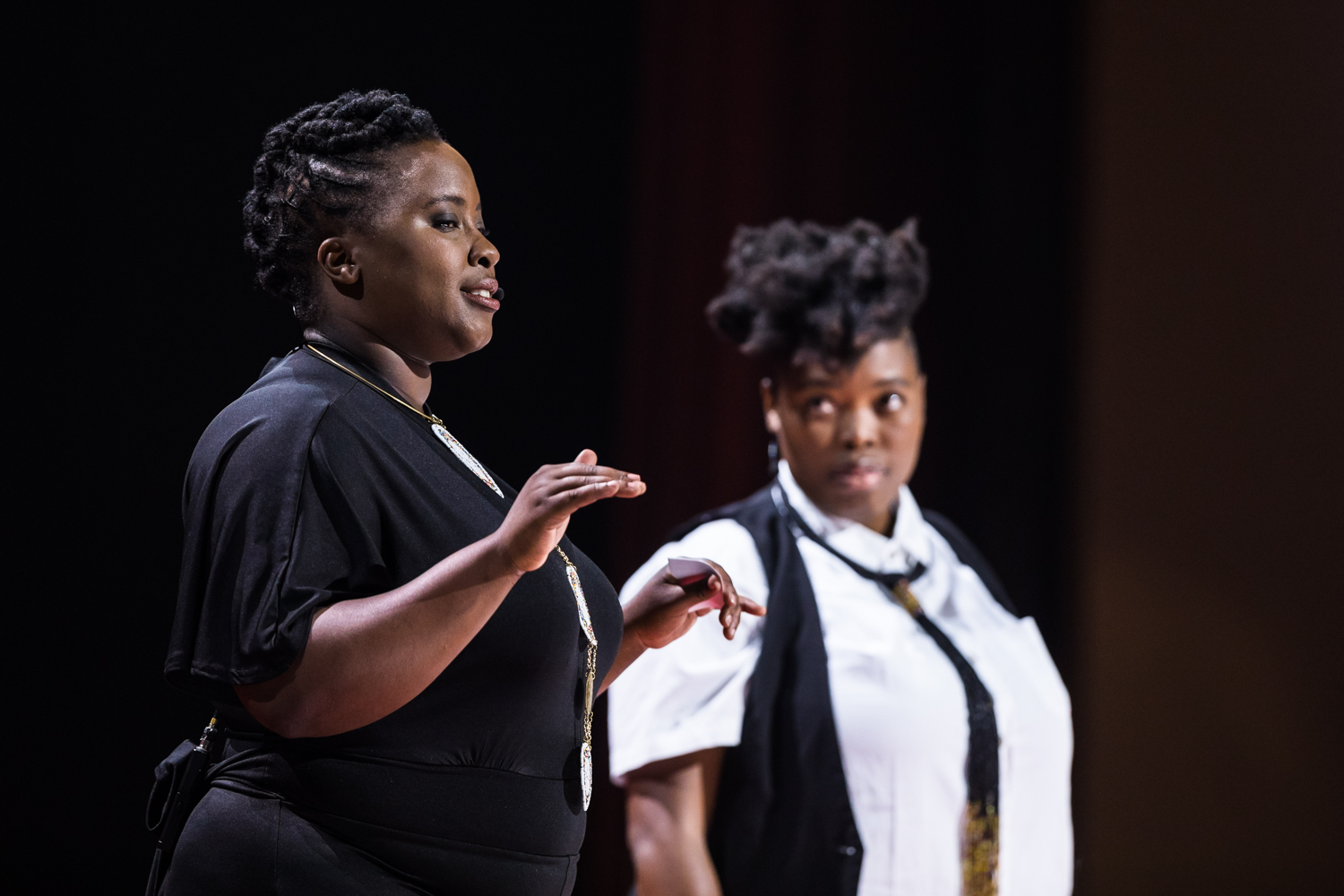 Tiffany Mugo and Siphumeze Khundayi speak to the joy (and occasional comedy) of sex — and ask us to look at some ancient African practices that might help us all get a little better at it. They speak together  at TEDWomen 2017. Photo: Stacie McChesney / TED

The dynamic duo intent on bursting our filter bubbles and bringing us together. Although it sounds like the plot of a rom-com — Republican guy meets liberal woman; sparks fly! — John Gable and Joan Blades have formed a very real friendship that is fostering meaningful exchanges between people from different parties, groups and backgrounds. Gable, who calls himself “a product of small town America, conservative at its heart,” worked in Republican politics before entering the tech world. Alarmed by the filter-bubble phenomenon, he founded AllSides.com, which uses technology to present issues from multiple angles. A Berkeley, California, native and progressive, Blades (who co-founded Moveon.org in 1998) is the co-founder of LivingRoomConversations.org, which organizes people to hold small gatherings in their homes to speak to those holding alternate viewpoints. The goal is understanding. “It’s a deep listening practice,” Blades says, “never a debate.” A few years ago, Gable and Blades created AllSidesforSchools.org, which pairs students with their counterparts in other parts of the country and the world. It’s been used in 42 states so far, and after participating, “92 percent of students say they better understood the other student’s side,” reports Gable. Humans have thrived thanks to our ability to collaborate to solve problems. Gable and Blades remind us that as we face our most intractable challenges yet — climate change, poverty, chronic disease — we will only succeed if we listen and learn from each other. 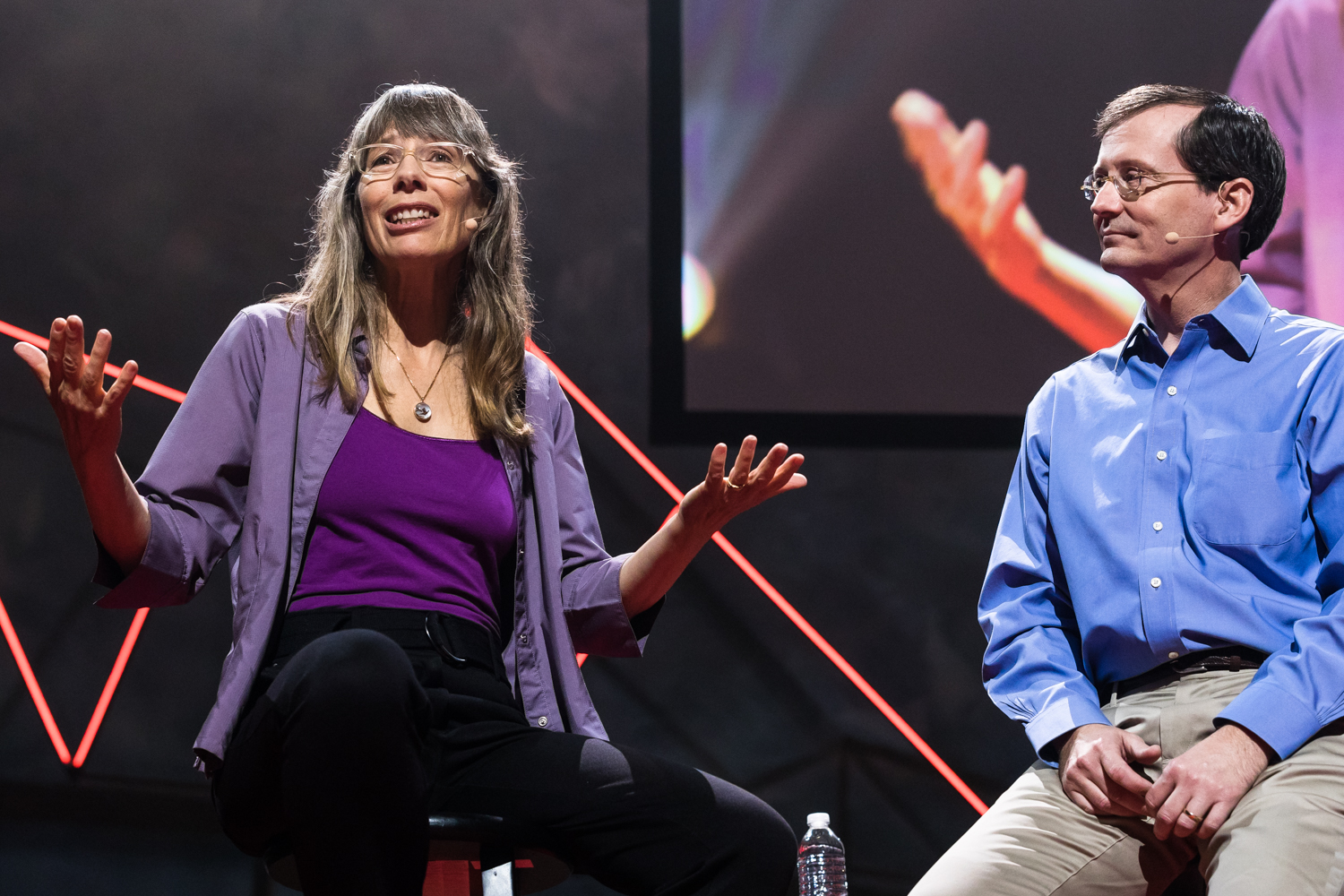 Joan Blades is a lefty; John Gable is … not. But they’re friends, and they can have a conversation about what really matters to them. They speak together at TEDWomen 2017. Photo: Ryan Lash / TED

The power behind the partnership. Our hosts Jean and Chris come back to close the session — and to expand on an idea teased in Jean’s short intro: that partnerships are more powerful than we know. In her work with The Elders, a group of veteran, venerated leaders who advise on world events, she noticed that the great figures she was working with all seemed to have a trusted partner who was that magical combination of supportive and honest. Exploring the relationships of folks like of Jimmy and Roslyn Carter, or Desmond and Leah Tutu, she unpacks the qualities that make a great and productive partnership — which she’s exploring in a new project called Plus Wonder. 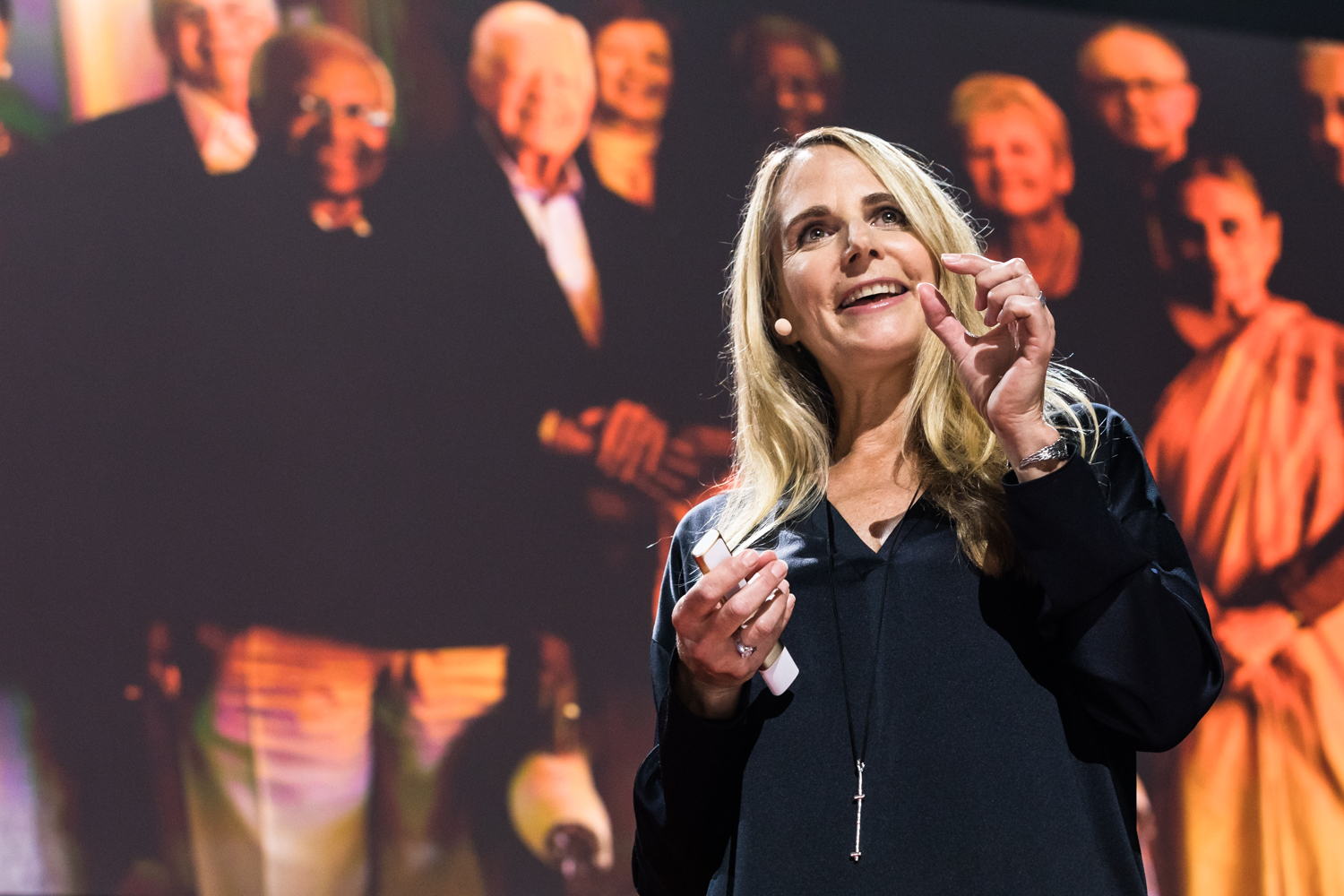 In her work with The Elders, pictured behind her, Jean Oelwang became fascinated by how many great people were paired up with an equally great partner — a friend, a spouse, someone who gave them honest answers and helped them be their best. She speaks at TEDWomen 2017. Photo: Ryan Lash / TED