TED2017 begins with a manifesto: “We will not sleepwalk into a future of dread. Instead we will pursue: courage, deep human connection, imagination, thrilling possibility, understanding. The Future You is yet to be written. Let’s write it together.”

In a comprehensive opening session — hosted by TED’s Head Curator, Chris Anderson, and streamed live to 800 cinemas across the world — talks and performances by a robot, chess grandmaster, futurist, cyberspace analyst and spiritual leader, among others, taught us that that the future you, and us, is what we make of it.

Below, recaps of the talks from Session 1, in chronological order. 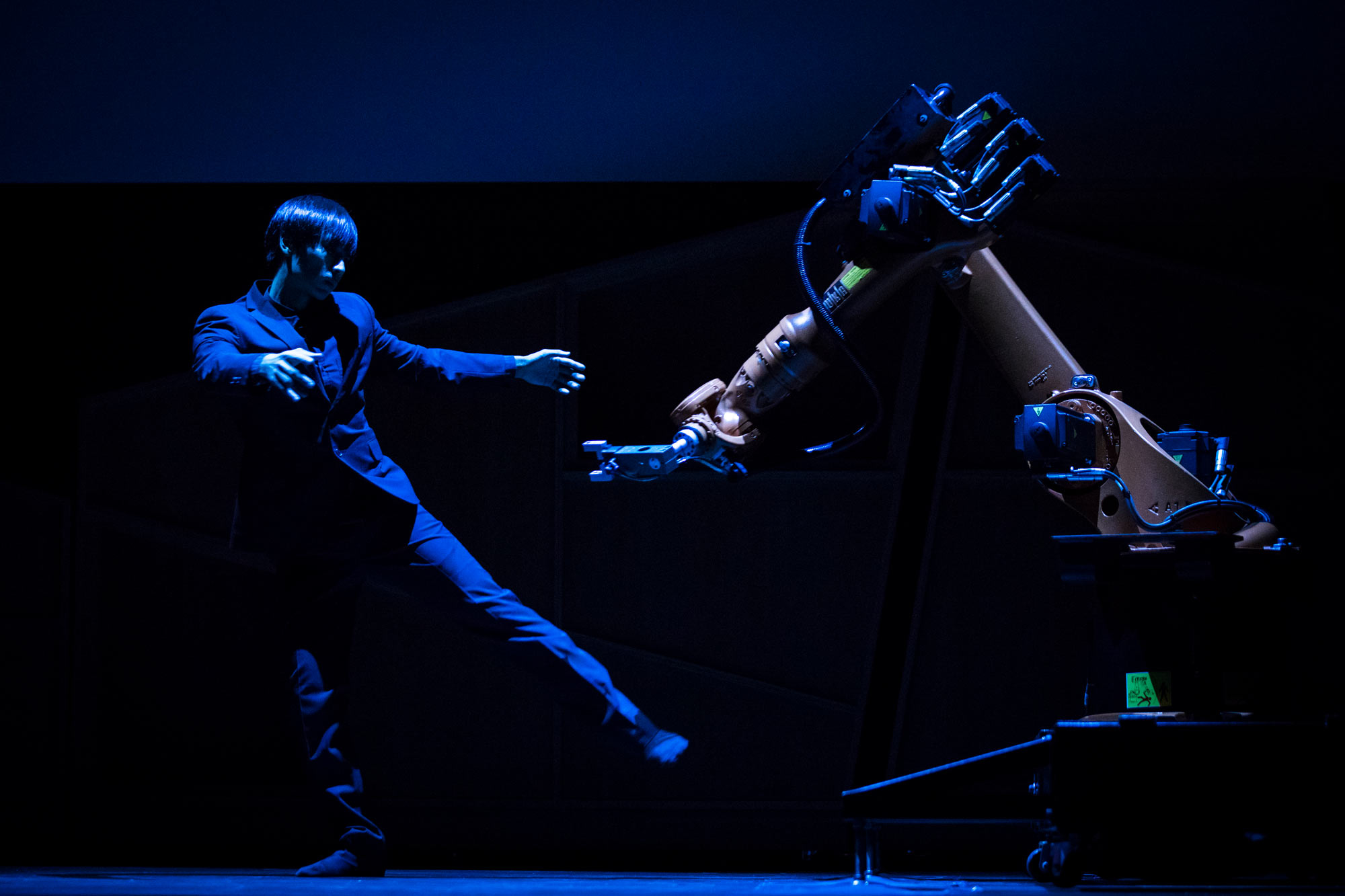 Dances with robots. On the dark stage, a light appears. Taiwanese choreographer Huang Yi stands face to face with a machine, the kind of robotic arm you’d expect to see on an assembly line. This is KUKA — all steel, bolts and pumpkin orange coating. As a cello played by TED Fellow Joshua Roman trills to life, KUKA looks Yi up and down. The two lock eyes — and they begin to dance. As Yi’s limbs spin and twist, KUKA moves with surprising grace and subtlety, joints folding over and lifting up in this intricate duet. As Yi tumbles to the ground, KUKA darts and pivots to follow him. This robot does not have autonomy — each minute of its movement takes Yi 10 hours to program. And yet, KUKA appears to want to connect, to want to understand. KUKA reaches out for Yi’s hand. Lifts him by the chin. And nudges him to standing. 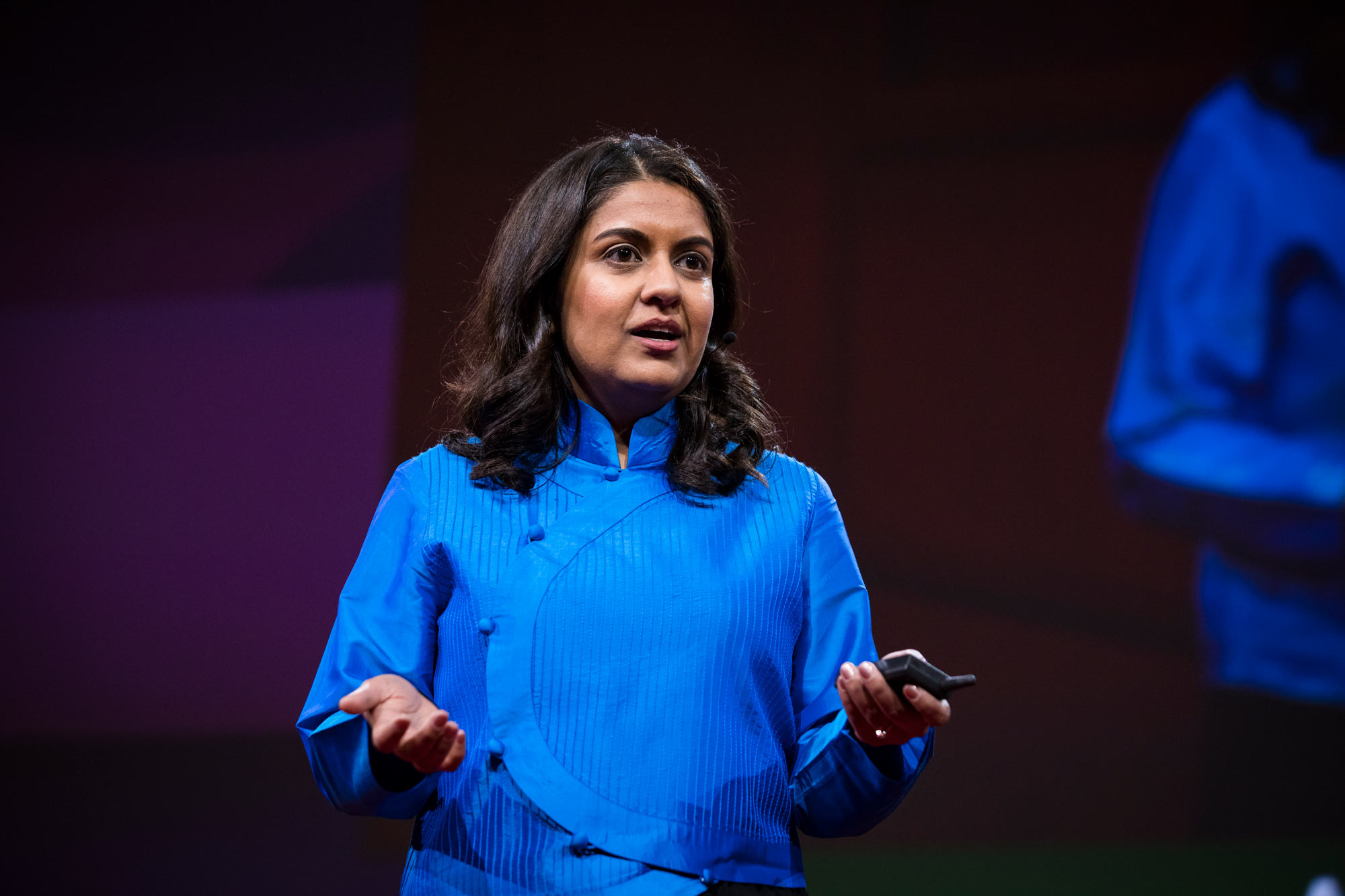 Designer Anab Jain doesn’t ask us to imagine a far future — she shows us what it might look like. She speaks at TED2017, April 24, 2017, Vancouver, BC, Canada. Photo: Bret Hartman / TED

The future, today. Together, we’re building the future, moment by moment, action by action, but we’re not always good at seeing how our present actions create the kind of future that inevitably arrives. “It can feel like things are happening too fast,” says TED Senior Fellow Anab Jain, “so we let the future just happen to us.” But there’s another way. As co-founder of design firm Superflux, Jain listens to the weak signals from the future all around us and uses those signals to create experiments and build objects that allow us to tangibly experience possible futures. She believes that allowing people to touch, feel and smell the future can be a powerful agent to create change now. “We have the chance to change direction, a chance to have our voices heard,” Jain says, “a chance to write ourselves into the future we want.”

Facing our fears to get the most out of our technology. As people worry that computers may soon overtake us, the first soldier in the human-machine battle is here with a reassuring message: “This is excellent, excellent news,” says Garry Kasparov, regarded by many as the greatest chess player in history —  and who very memorably lost a match to IBM’s Deep Blue in 1997. He explains that humans must continue to do what only we can do — dream big, and then work with, not against, computers to solve our biggest challenges and problems. Read a full recap of his talk.

Why we must question the truth. Accounts of hacking and leaks populated our newsfeeds in 2016 — for example, the compromise of the US Democratic National Committee networks, led by Russian government hackers, that fueled suspicion that the nomination process was rigged. But while the US voting public ate up the insider gossip and emails that the hack revealed, the bigger question went unasked: What was the Russian government’s ultimate goal in hacking an American political party? Cyberspace analyst Laura Galante works with the cybersecurity company FireEye, and to her, the DNC hack reveals something important: that the Russian government has realized how exploitable our minds and newsfeeds have become in the age of social media. Our realities are consumed by the information we receive. Thus, our minds and our ability to think critically are our greatest defense. “We must recognize that this place where we increasingly live, quaintly termed cyberspace, isn’t defined by ones and zeros, but by information the people behind it,” Galante says.

The one moment that matters. OK Go‘s music videos have brought us wonder and surprise for the past 10 years. Live onstage, the band starts off with an impeccably timed performance/video hybrid, playing along to the incredibly complex video for their buoyantly upbeat song, “This Too Shall Pass.” In the video, the band members are part of a massive Rube Goldberg machine containing 130 interactions, starting with dominos and eventually including a smashing piano, an old hatchback, a falling filing cabinet and much, much more. How do they come up with such imaginative ideas for their videos? It’s a question they get a lot, says lead singer and guitarist Damian Kulash. “It doesn’t feel like we think of these ideas at all; it feels like we find them,” he says. Talking us through the band’s creative process, Kulash says that having a great idea is about bringing disparate ideas together — and being in the right place at the right time. Then the band plays along to their video for “The One Moment,” another visual maelstrom set to a catchy rock tune in which the band members flawlessly sync colorful eruptions of graffiti cans, panels of water balloons, exploding guitars and gallons of flying paint. 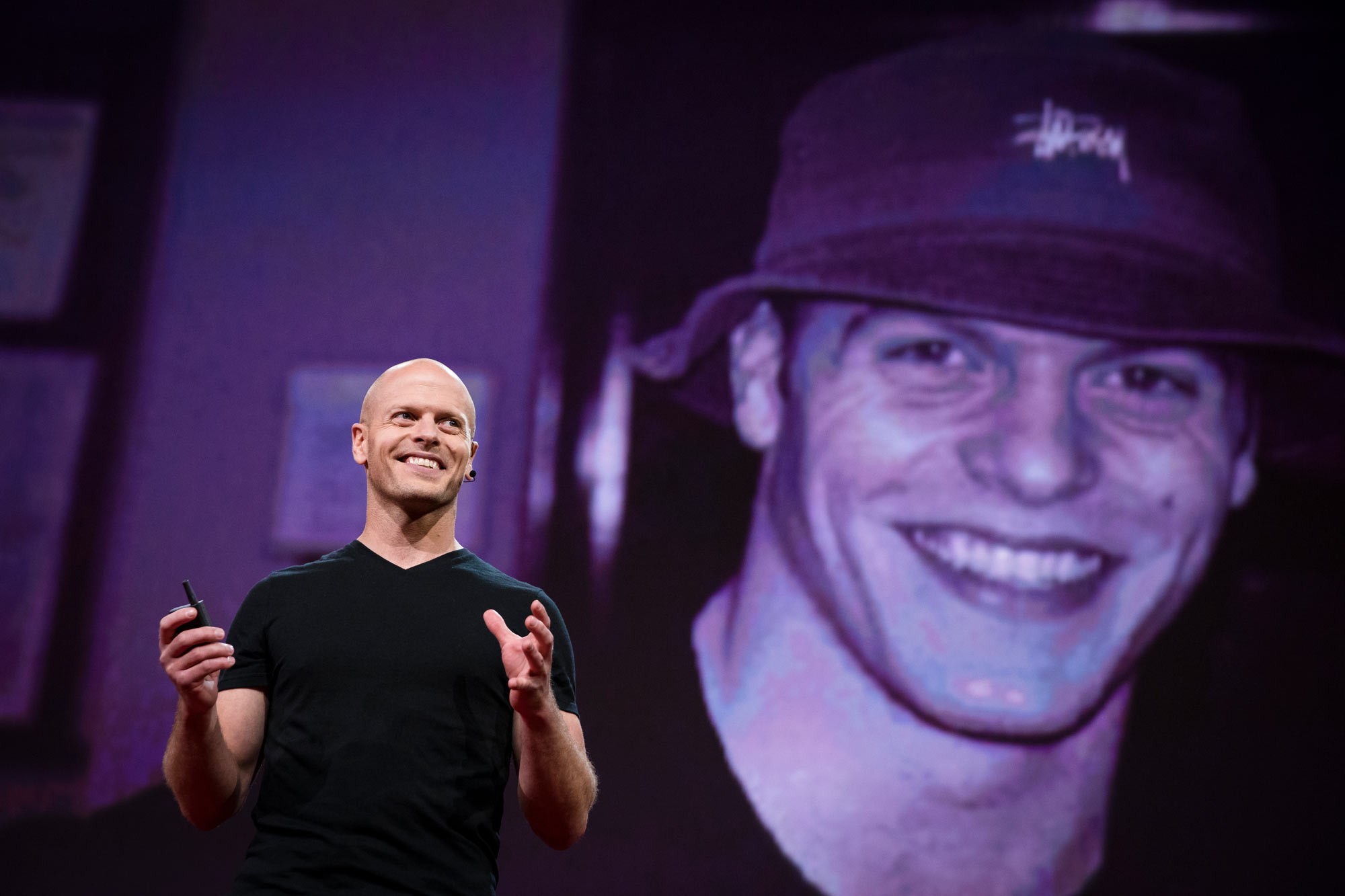 Conquering your fears, the stoic way. The biggest decisions we face are usually the most frightening. When presented with these big moments, or opportunities, we have two choices: act or avoid. Tim Ferriss wants us to dive deep — fully envisioning and planning for our worst fears. He recommends writing down our detailed anxieties: how they can be prevented, how you can repair the damage if they come true and, perhaps most important, the cost of inaction. He credits the philosophy of stoicism with enabling him to break the unhealthy, life-threatening and relationship-ruining pattern of overworking and self-medicating he went through when he started his first business. Through this “premeditation of evils,” we can eliminate fear due to incomplete information, ending paralysis. The key is detail, after all. “If your goals aren’t specific, you can’t achieve them,” Ferriss says. “If your fears aren’t specific, you can’t overcome them.” 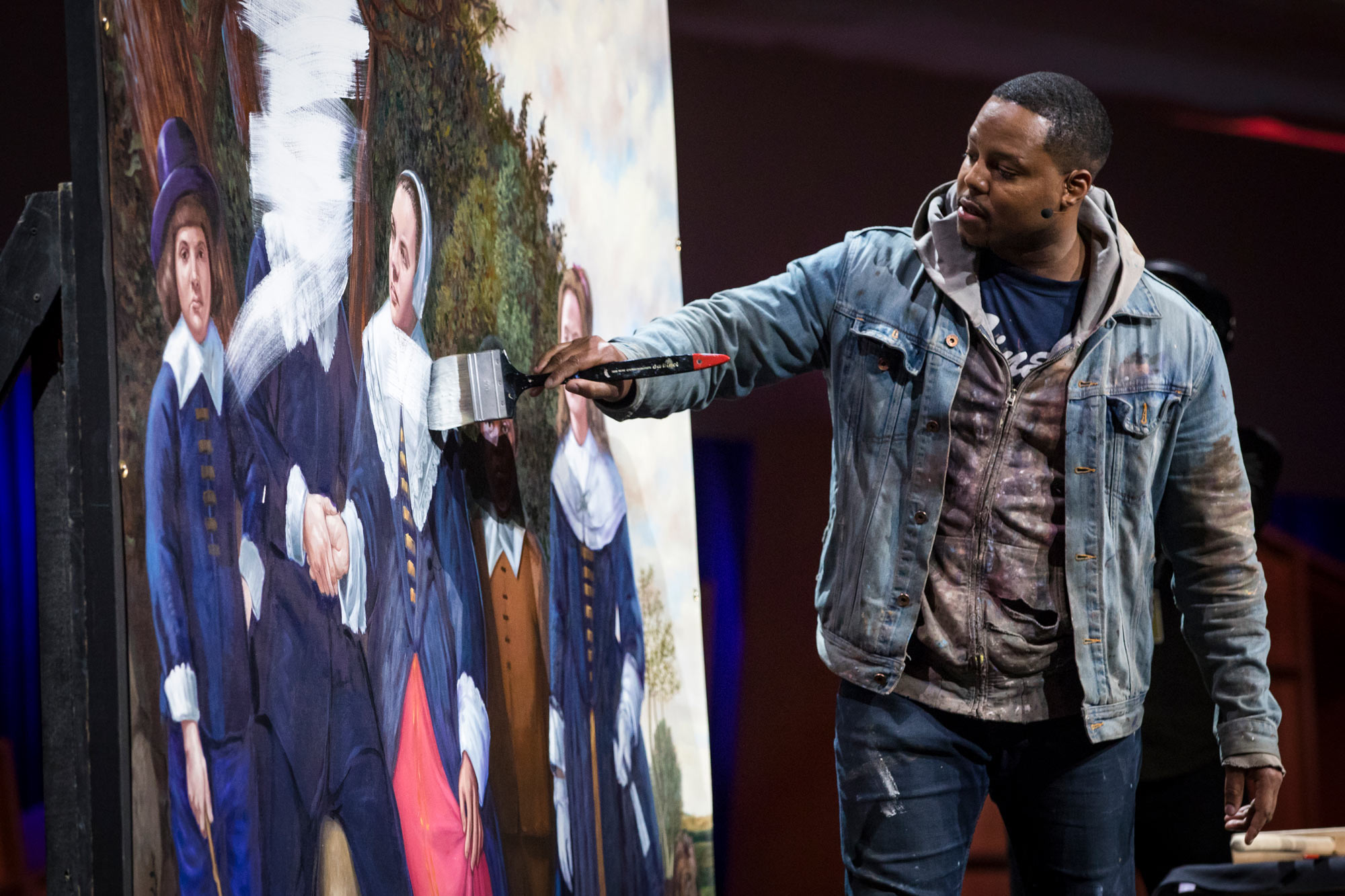 By repainting a painting, Titus Kaphar asks us to reframe the way art shows and distorts history. He drew a standing ovation at TED2017, April 24, 2017, Vancouver, BC, Canada. Photo: Ryan Lash / TED

Can we amend history through art? When artist Titus Kaphar was in college, he took one of those art-history survey classes that attempt to cover everything from cave painting to modernism in a single semester. His textbook contained exactly 14 pages on the history of people of color in art. On the day of that lesson, the professor said: Sorry, we don’t have time to cover it. Now, in his own powerful work, Kaphar dives into the topic — examining what is taught and what is ignored, what is shown and what is hidden, in the history of art. Onstage, he unveils his own version of a 17th-century Frans Hals painting, a group portrait of a wealthy white family and their black servant, a young boy. As he explains key features of the painting — the exaggerated height of the father, the outsize gold necklace on the mother and the lace on her gown– he gestures with a brush loaded with white paint, obscuring parts of his own art as he brings the hidden story of the painting into view. “Historically speaking, I can find out more about the lace [on the woman’s dress] than I can about the [black] character here,” he says.  By repainting his own painting, Kaphar makes real the idea of amending our shared history — rather than ignoring or eradicating it, he suggests we shift our focus and confront what these images represent. “Painting is a visual language where everything is meaningful, important and coded,” he says. “We can’t erase this history, it’s real. We have to know it.”

Facing the future without fear, together. It’s a fateful moment in history. We’ve seen divisive elections, divided societies and the growth of extremism — all of it fueled by anxiety, uncertainty and fear. The world is changing faster than we can bear, and it’s looking like it’s going to continue changing faster still. “Is there something we can do, each of us, to be able to face the future without fear?” asks Rabbi Lord Jonathan Sacks. In an electrifying talk, the spiritual leader looks at how we move from the politics of “me” to the politics of “all of us, together.” Read a full recap of his talk here.