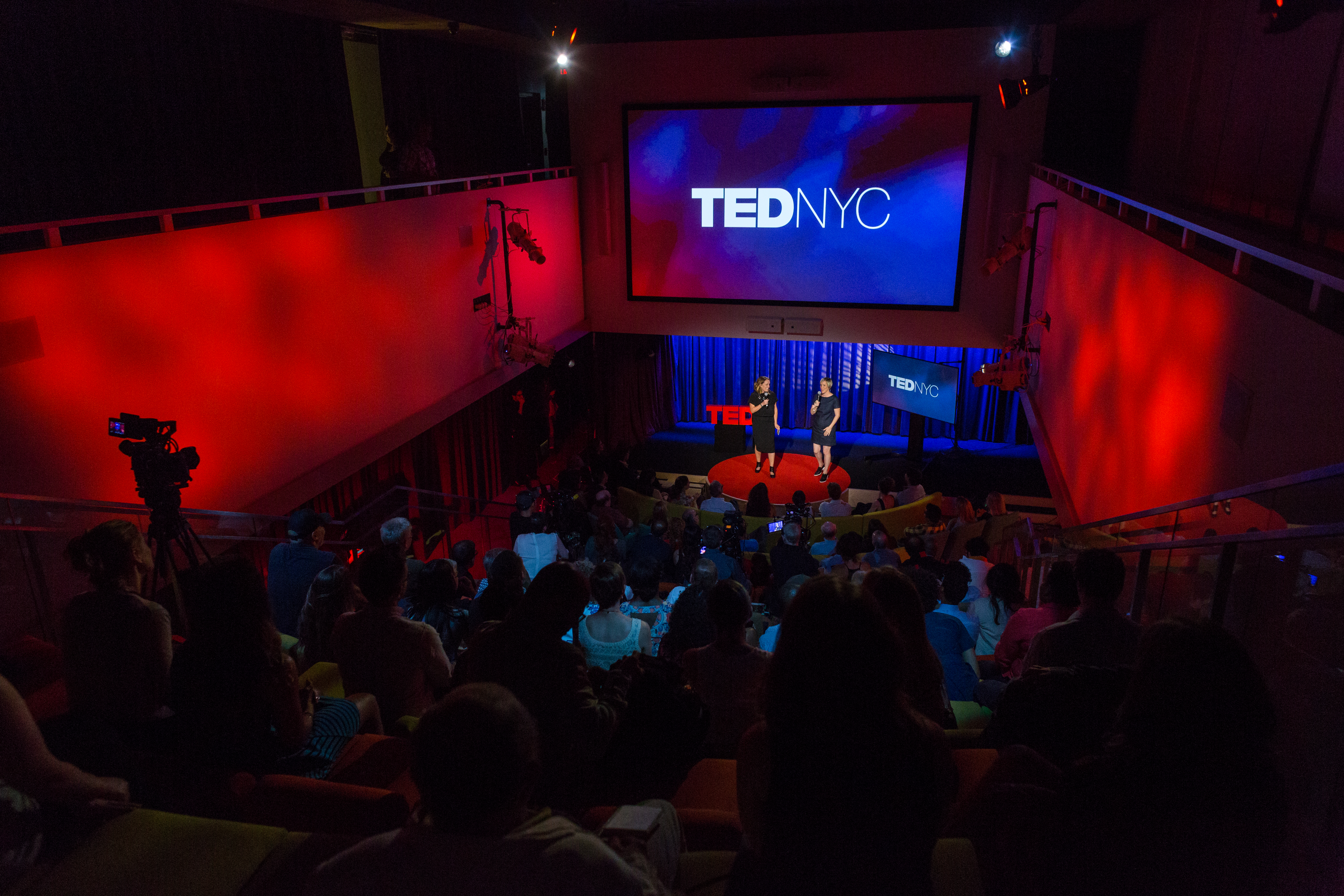 The conversation around the upcoming US presidential election is full of frenzy, headache and noise. But elections are about more than divisiveness and disagreement — they’re civic events worthy of celebration, and, while it may seem unbelievable at the moment, they hold the promise of transforming governments for the better.

At TEDNYC: The Election Edition, six speakers who think about elections differently — whether as a design challenge, a translation project or the stimulus for creative work — spoke about why the future of our shared political sphere may be brighter than it seems, and why it’s absolutely and completely necessary for Americans to vote in November.

It was our very first salon in the new theater at TED HQ, a custom-made cavern of seats, screens, cameras and all of the technical wizardry necessary to film sessions of expertly curated, intellectually stimulating TED Talks. The theater has been the working focus of many talented and dedicated TED staffers for countless months, and tonight’s inaugural session was a landmark moment for the organization and the first step in a new adventure that we can’t wait to share with you.

First up was the author of the best-selling memoir, Hillbilly Elegy, J.D. Vance.

America’s forgotten working class. J.D. Vance grew up in a small, poor, predominantly white town in the Rust Belt of southern Ohio, where he had a front-row seat to the social ills plaguing so many working-class towns like his: a heroin epidemic, families torn apart by divorce and sometimes violence. In these forgotten parts of America, structural barriers like a lack of jobs, failing schools and brain drain often prevent poor families from joining America’s fabled upward mobility. But, Vance noted, something much more difficult to quantify was infecting the minds of kids he grew up with — a sense of hopelessness and despair, a feeling that they’d never get ahead no matter how hard they worked. With the help of a perceptive grandmother who told him not to believe the deck was stacked against him, a four-year crash course in character-building in the form of the Marine Corps and a lot of luck, Vance closed the social-capital gap and went on to law school and a career in finance. But a lot of kids from his town won’t have that good luck, and that, he says, raises important questions that everyone from community leaders to policy makers needs to ask: How do we help more kids from towns like his? 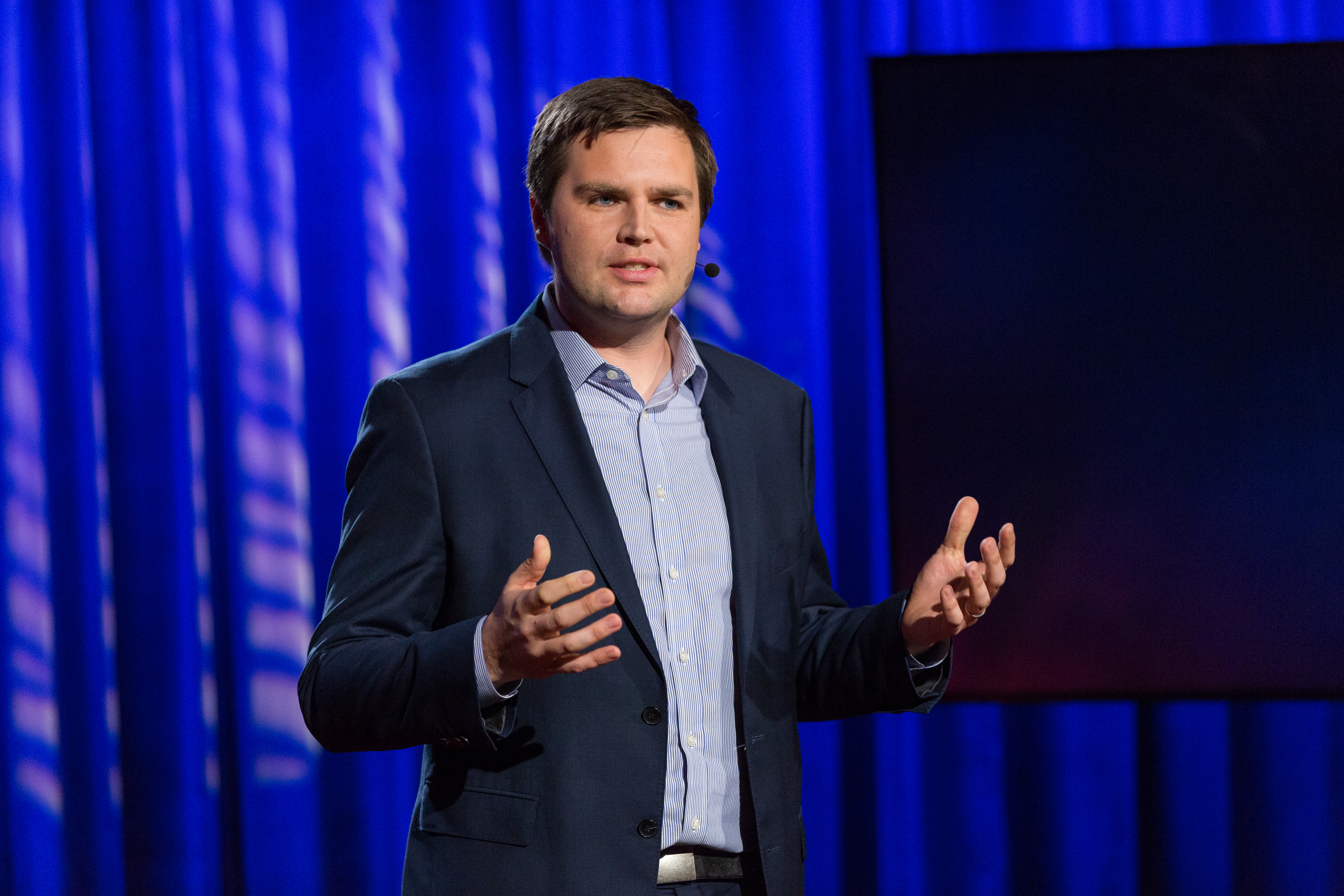 The author of Hillbilly Elegy, J.D. Vance, spoke about growing up poor in southern Ohio, where his classmates shared “a sense of hopelessness that leads to conspiratorial places, the sense that ‘No matter how hard I work, they’re not going to let me in.'” He spoke at TEDNYC in New York, NY. (Photo: Ryan Lash / TED)

“Historical eras do come and go.” Journalist Michael Tomasky gives a historical crash course on how American politics has turned into such a polarized battlefield — and shares three rays of hope for the future that may break through the current ideological maelstrom. (A few key changes are on the near horizon, he says — including, believe it or not, reform of the dreaded filibuster.) Most of all, he encourages us to take the long view. “Historical eras do change,” says Tomasky. “All is not lost.”

Why ballot design matters. You’ve almost definitely made mistakes when you’ve voted, and you probably didn’t know it, says civic designer and ballot design researcher Dana Chisnell. She explains how ballot designs have confused voters and, in turn, influenced election outcomes, breaking down the story of an electoral disaster in Sarasota County, Florida — where, in 2006, 18,000 Floridians left the polls without recording a single vote in the congressional race, the hottest race on the ballot — as well as the infamous hanging chads of the US presidential election of 2000. Chisnell shares ten simple design principles, like using mixed-case lettering and avoiding centered type, which she and her team have developed to improve election ballots and to help people vote the way they intend. Learn more about the design principles and the quest to design the perfect ballot here.

Songs of protest. “When they say we want our America back, what the f*** do they mean,” asks Jill Sobule in “America Back,” a song she played often at Bernie Sanders rallies that became an anthem of his campaign. With an upbeat tune and a hefty dose of humor, Sobule reflects on the long history of immigration in America — and the anti-immigration sentiment that has always accompanied it. She also shared with the audience her wish to reinvigorate the tradition of protest art through her initiative My Song Is My Weapon, an online hub where artists and musicians can share, create and collaborate on protest songs and protest art.

A shared language of democracy. As a consultant for the United Nations, Philippa Neave works with emerging democracies to organize their very first elections, helping with the details those of us in established democracies take for granted: how to register, how to vote, why you should vote. And so often, one of the biggest stumbling blocks is language. In many countries, the appropriate language to describe the electoral process simply does not exist — or when it does, the concepts the words represent are not well understood. To right the problem, Neave worked with colleagues to establish the Arabic Lexicon of Electoral Terminology, a reference tool in Arabic, English and French that covers eight Arab countries. Even with this technical reference tool, Neave still sees an important missing piece of the puzzle, “a work of reference for the average person,” because it is only by creating a shared language and shared understanding of democracy that we can hear the voice of the voiceless: “The silent majority is silent because they don’t have the words. Let’s give them the words.” 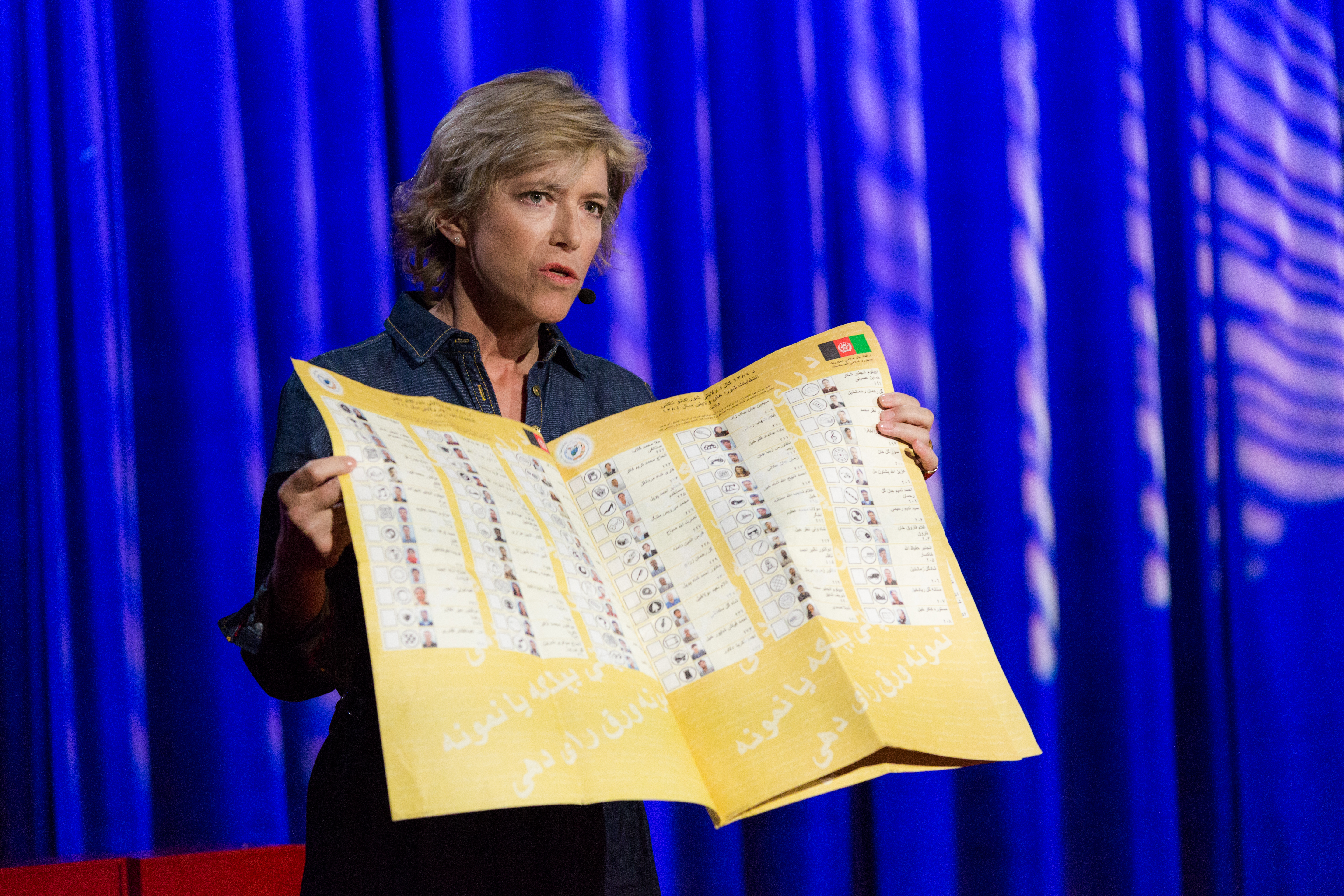 Elections consultant Philippa Neave holds up a ballot from the 2005 election in Afghanistan, whose citizens were so eager to run for office for the first time that the ballot ended up being the size of a newspaper.  She spoke at TEDNYC in New York, NY. (Photo: Ryan Lash / TED)

It’s our country, too. Sayu Bhojwani, president and founder of The New American Leaders Project, tells the essential American immigration story through her own 16-year journey to becoming an American citizen — and urges her fellow immigrants to find their own power in the political process, by voting, by running for office, and simply by speaking up about what they care about. “Immigrants’ votes, voices and vantage points can help make our democracy strong,” she says. “We have fought to be here.”

The joy of voting. There was a time in America when voting was fun. That time, says civics educator Eric Liu, is called most of America’s history. Tracing the robustly, raucously participatory history of voting in America, from the Revolution through to the Civil Rights era, Liu recalls American traditions of parades, street theater, open-air debates, festivals and bonfires on election day. “Decades of television and the Internet have killed much of that joyful culture of voting,” he says. “The couch has replaced the commons, and the screen has made most citizens spectators.” How can we get people excited about voting again? In partnership with the Knight Foundation, Liu has launched The Joy of Voting project, inviting artists, activists, designers, and educators across the country to come up with creative projects — from DJ sets to plays to punk rock satire — to encourage the far-too-many Americans who don’t vote to express themselves at the ballot box. “Why bother voting? Because there is no such thing as not voting,” Liu says. “In a democracy, not voting is voting — for all that you may detest and oppose.” 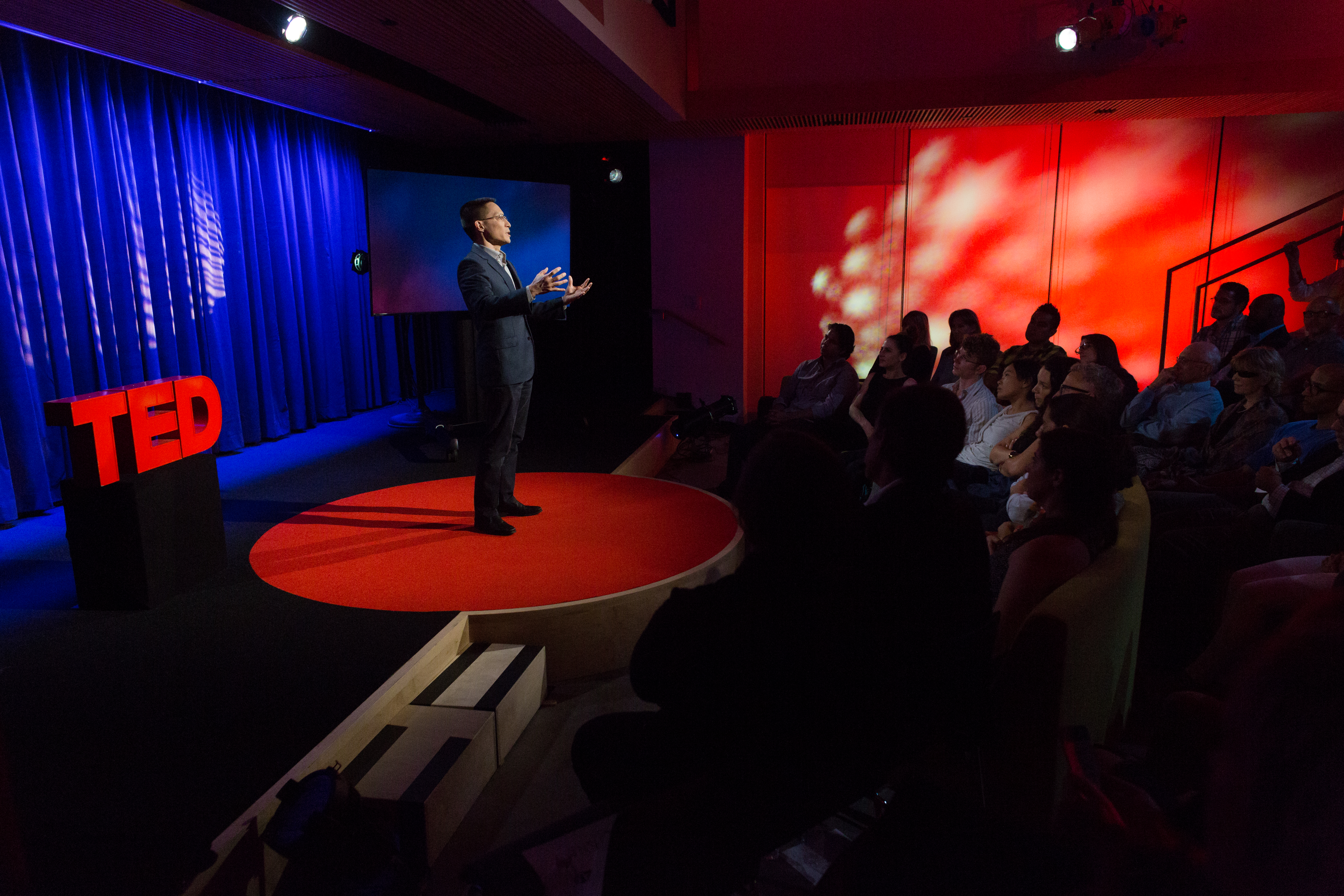 “Not voting can be dressed up as an act of passive resistance,” says Eric Liu, “but it’s actively handing power over to people who will gladly take advantage of your absence.” He spoke at TEDNYC in New York, NY. (Photo: Ryan Lash / TED)