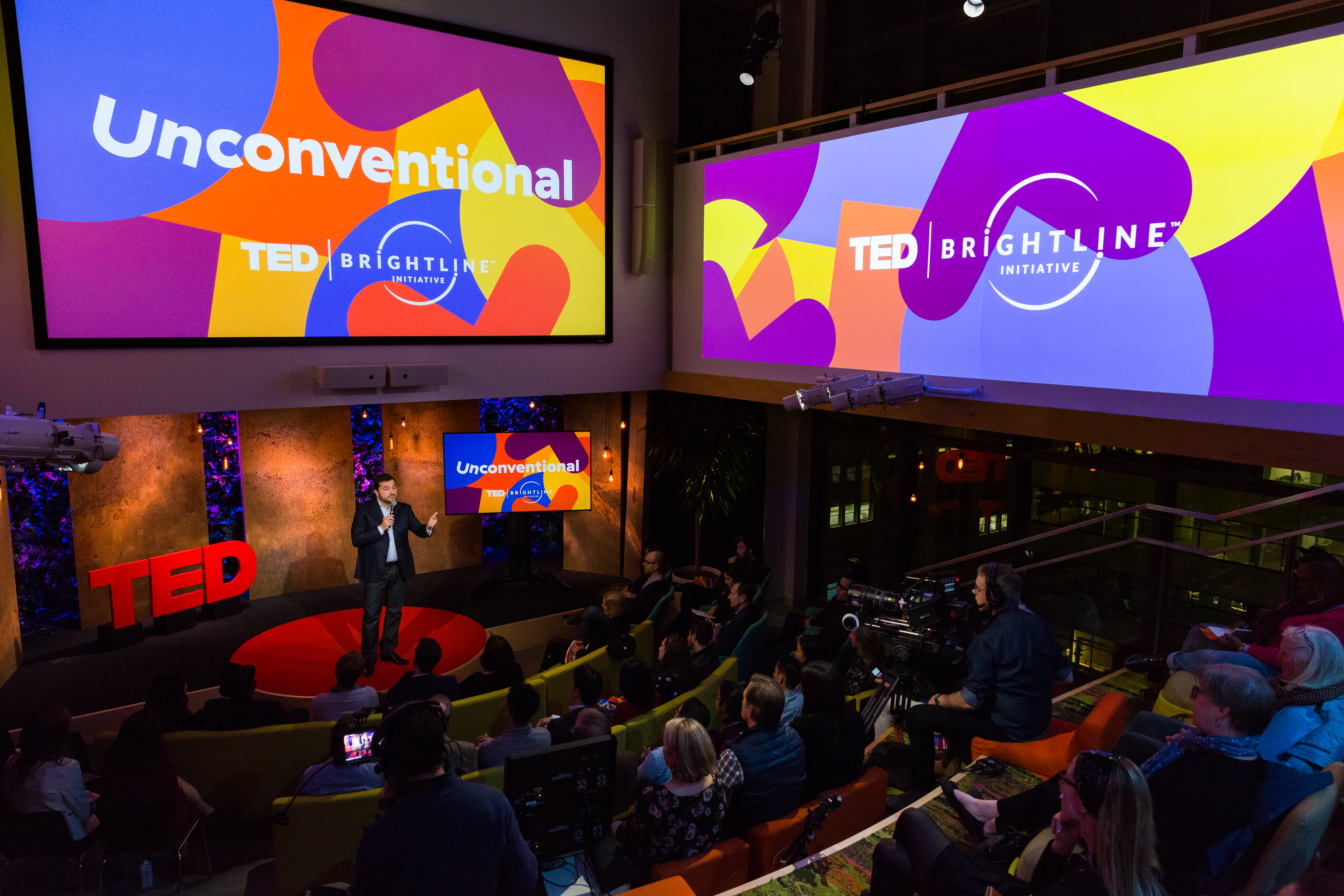 Today’s volatile world demands that we do things differently — that we pay attention to things most people don’t see. At TEDSalon: Unconventional, presented by TED and the Brightline Initiative and hosted by TED’s Cloe Shasha and Alex Moura, six leaders and visionaries shared novel ideas that are driving the world’s most impactful organizations. 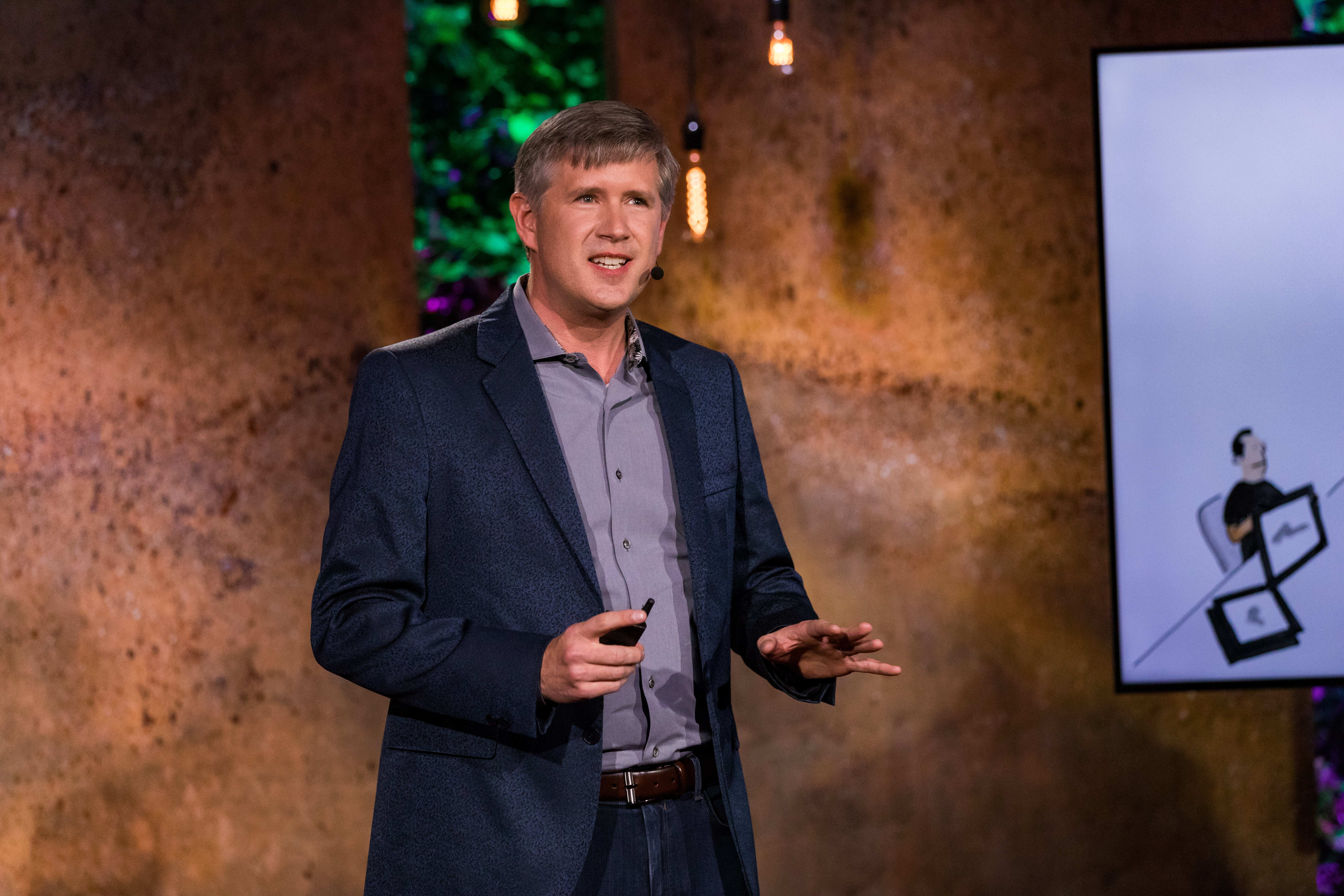 “Marketoonist” Tom Fishburne shares insights from his dual careers as a marketer and cartoonist, and makes the case for more humor in business. (Photo: Ryan Lash / TED)

The power of laughing at ourselves. A sense of humor is one of the most important — and overlooked — tools in business, says author and cartoonist Tom Fishburne. With his “Marketoonist” cartoons as a backdrop, he shares three ways that laughing at ourselves is good for business. First, humor gives us a way to bond with others, opening up conversations and making people feel connected to each other. It’s also disarming, letting us talk about things that we’d otherwise be uncomfortable bringing up; in other words, “It helps us say what needs to be said.” And humor lets us be vulnerable, to let down our guard and confront our fears. “Fear kills creativity,” Fishburne says, “and humor is our most powerful tool to drive fear out of the system.”

What Henry Ford can teach us about AI. Henry Ford is best known for the assembly line, but a different aspect of his work interests AI strategist Kathryn Hume: charcoal briquettes. Ford began making charcoal in the 1920s to reuse wood scraps from his auto plants, eventually leading to the creation of the charcoal briquette used to power portable grills. By the mid-1930s, he was marketing “picnic kits” for suburban families driving to parks (in their Models Ts, of course), repurposing a byproduct of his core business to develop a whole new revenue stream. Hume brings this concept to her own work, where she helps companies use AI to optimize their current work and then use the data collected to create new businesses. She gives the example of a medical device company that uses machine learning to identify high-risk moments in prostate surgery: each operation has become a learning opportunity, and the data is being repurposed to empower an autonomous surgeon robot. This is the true promise of AI and machine learning, Hume says: using AI to make a process better, and then repurposing the data collected to build something entirely new. Or, as she puts it: “Take the fruits of yesterday’s work and transform it into tomorrow’s value.” 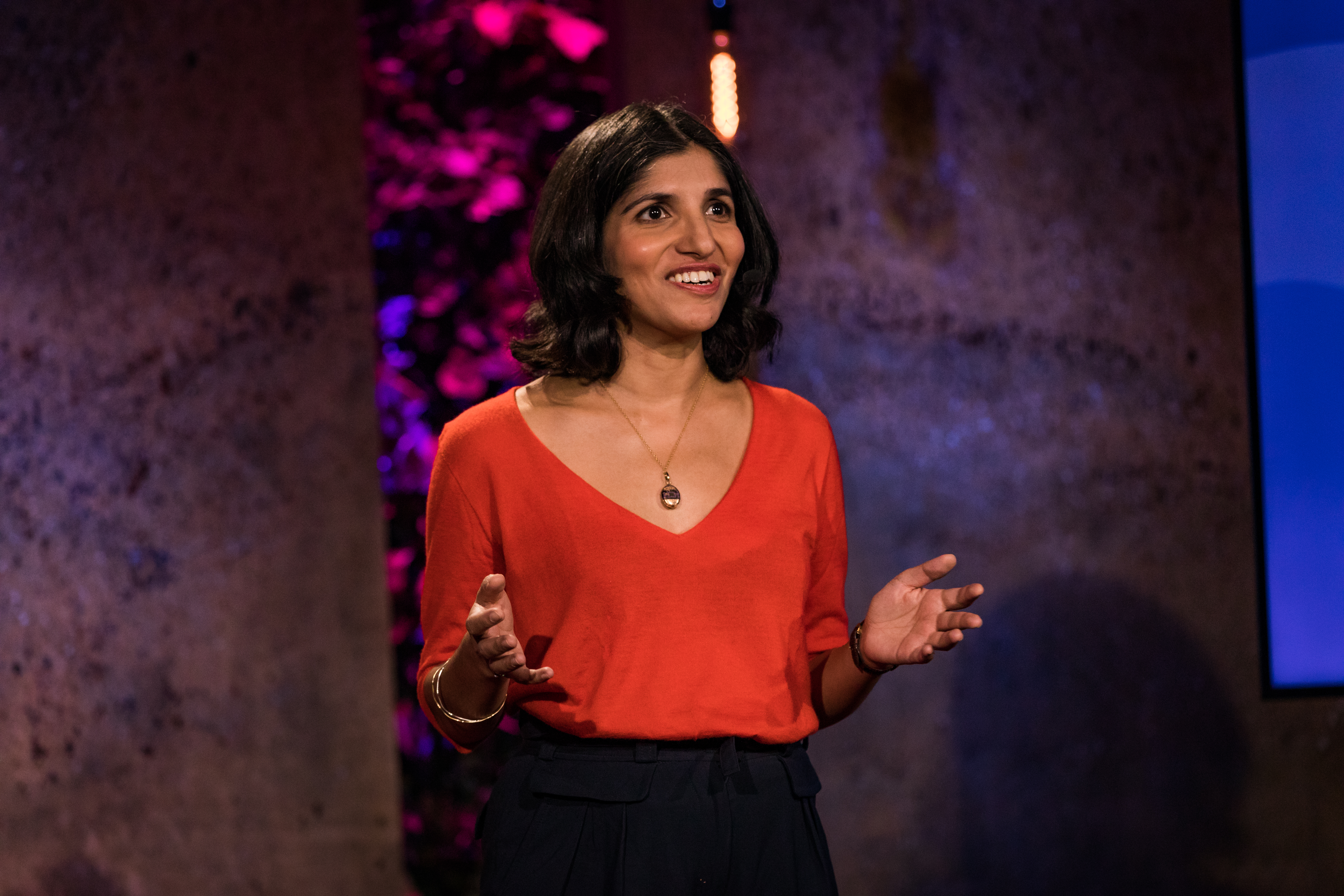 Publisher Chiki Sarkar introduces Juggernaut, a company that creates books and other digital content for users in India, meant to be read on mobile phones. (Photo: Ryan Lash / TED)

Transforming reading (and writing) for the smartphone age. Imagine if you could settle into a seat for your train or bus ride home from work, tap an app on your phone and get an engaging story that costs under $1 and occupies you for the length of your commute. That kind of concise, inexpensive, in-app reading experience is available in India via Juggernaut, which Chiki Sarkar cofounded in 2015. Juggernaut content is written specifically for reading on a phone, reflects what’s in the news and serves as a platform for new writers. Anyone can submit a poem, essay, story or novel to be considered for publication and sale on the app. “Just as we redefined what a book is and how a reader behaves, we’re rethinking who an author is,” Sarkar says. “By being everywhere, by being accessible and relevant, I hope to make reading a daily habit — as easy and effortless as checking your email, booking a ticket online or ordering your groceries.” 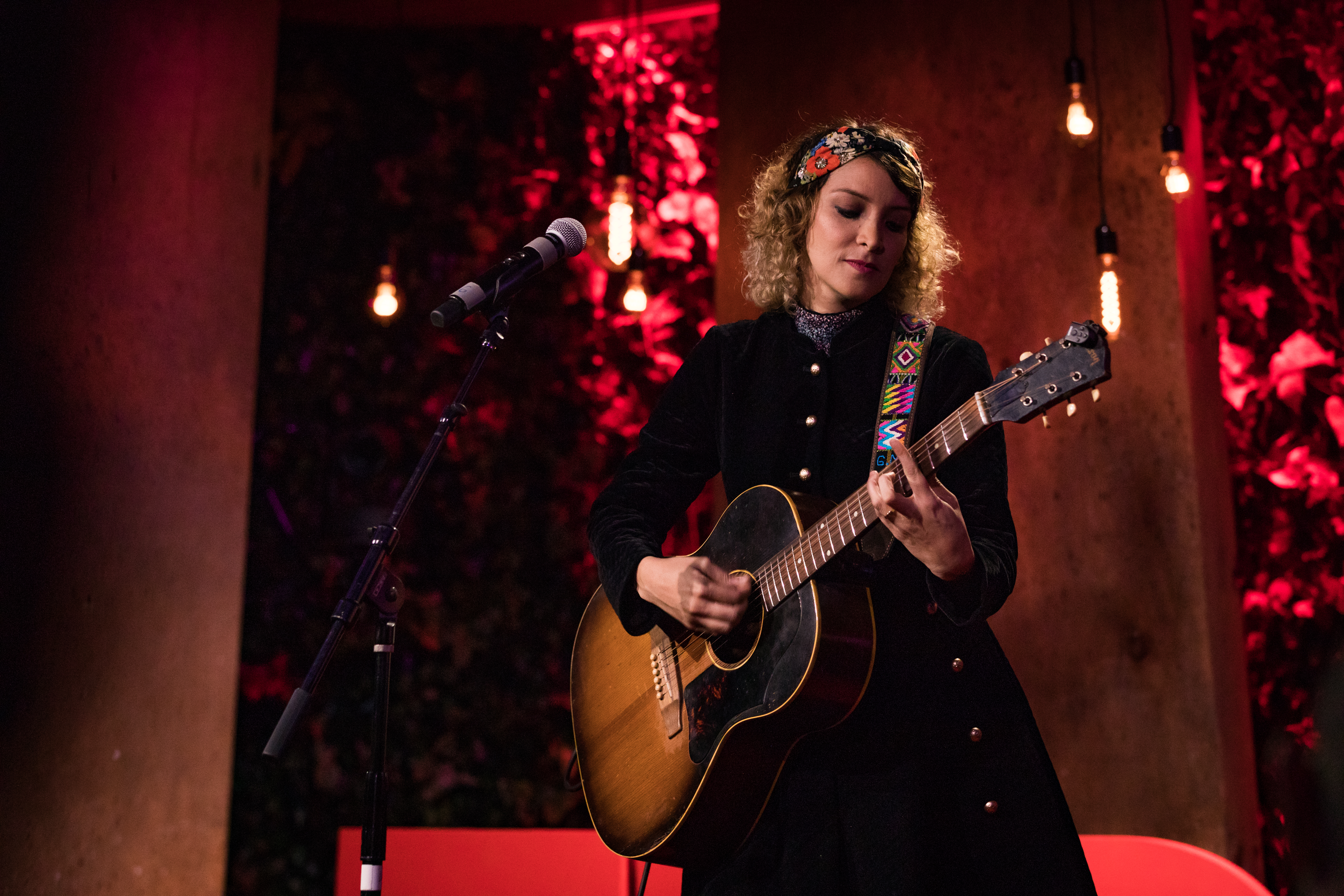 Spanglish beats. During a musical interlude, singer-songwriter Gaby Moreno brings her soothing and melodic voice to the TED stage. Born and raised in Guatemala, she sings in both English and Spanish, a unique genre she calls “Spanglish folk blues.” Moreno plays two songs, the soulful “O, Me” and mesmerizing “Sálvese Quien Pueda,” leaving the audience in just the right vibe to finish off the evening.

How to learn a language in months, not years. Lýdia Machová loves languages so much that she learns a new one every two years. She’s currently studying her eighth one. Machová is a polyglot — someone who can speak many languages fluently — and part of a large community of people from around the world who are just as passionate as she is about living a linguistically rich life. Each polyglot has their own way of absorbing the rules of conversation, vocabulary and syntax, she says — whether it’s watching episodes of Friends in German or making dinner with an Italian cookbook — but they all share the same four principles. The most important one, she says, is enjoyment. If you can infuse each step of the language-learning process with joy, the rest of the principles should follow easily: creating personalized methods of memorization, incorporating learning into your daily life, and cultivating a large dose of patience — because no language can be fully learned in a day. “If you’ve tried to learn a language and you gave up, thinking it’s too difficult, or you don’t have the language talent — give it another try,” Machová says. “Maybe you’re just one enjoyable method away from learning a language fluently.”

What does it mean to be civil? Author Teresa Bejan thinks that civility is BS — or, at least the way we talk about it is. In the United States, a country that proclaims itself to be diverse and tolerant, disagreements occur often, and in our divided political and social landscape, they can quickly become heated. Calls for civility during high-stakes disagreements can actually serve to silence, berate and dismiss opposing views, Bejan says. Through her research, she found that bringing the idea of civility — or the lack of it — into arguments dates as far back as the 16th century, when theologian Martin Luther called the Pope the “Anti-Christ.” Luther’s opponents spat back insults like “heretic,” “Protestant” and, yes, “uncivil.” The problem with civility talk, she says, is its concern with the manner of discussion rather than the ideas being discussed; accusing someone of incivility during an argument distracts from the dialogue entirely. Bejan suggests that instead we try “mere civility,” which she defines as “being able to disagree fundamentally with others, but doing so without destroying the possibility of a common life tomorrow with the people who are standing in our way today.”