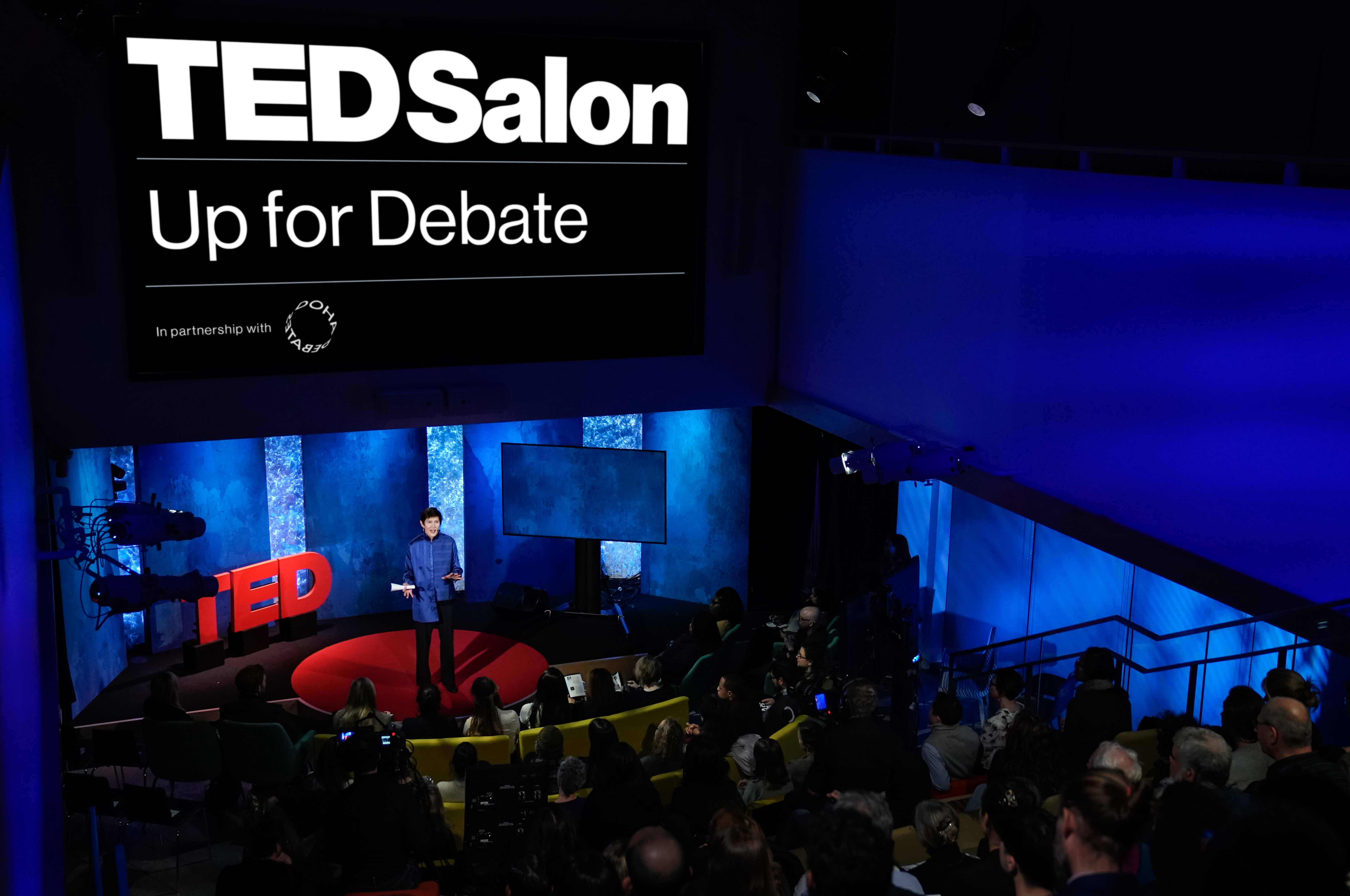 The world is more interconnected than ever before — and the need to bridge political and ideological divides has never been more urgent. Now is the time to examine the rules of genuine human engagement, to find common ground for respectful, passionate discourse and to celebrate civility.

That’s the idea behind TED Salon: Up for Debate, a session of talks hosted by TED Residency director Cyndi Stivers and presented in partnership with Doha Debates — a newly revitalized media venture that seeks to inspire action and collaborative solutions to global challenges through debate. On Wednesday, January 16, five speakers took the stage of the TED World Theater in New York City; meanwhile, five groups of people from around the world joined the session live via Shared_Studios‘s “Portals” project. In reclaimed shipping containers outfitted with AV equipment, the groups in Doha, Qatar; Kigali, Rwanda; Herat, Afghanistan; Hardy County, West Virginia; and Mexico City were invited to share their thoughts on hot topics in their parts of the world and respond to the talks in New York in real time.

After an opening song performed by the Brooklyn Nomads, the session kicked off with journalist Steven Petrow.

Civility shouldn’t be a dirty word. What does it mean to be a “civilist” — an archaic title describing an “individual who tries to live by a moral code” — in a world where “civility” is a dirty word? Voices on the right conflate civility with political correctness, believing it to be a tool for the left to demonize their opposition. On the left, civility is considered immoral if it allows for the acquiescence to injustice — think of Martin Luther King Jr. or the Suffragists, who made changes by speaking out. But does civility actually stifle debate? As Petrow sees it, civility doesn’t mean appeasement or avoiding important differences; it means listening and talking about those differences with respect. Reasonable discussions are crucial to a healthy democracy, he says, while hate speech, cyberbullying and threats are not; in fact, they suppress conversation by telling us, “Shut up or else.” What we need now are rules of engagement — “a Geneva Convention of civility to become better citizens.” He offers three ways citizens can work toward the greater good: de-escalate language; challenge policies and positions, not character; and don’t mistake decorum for civility. 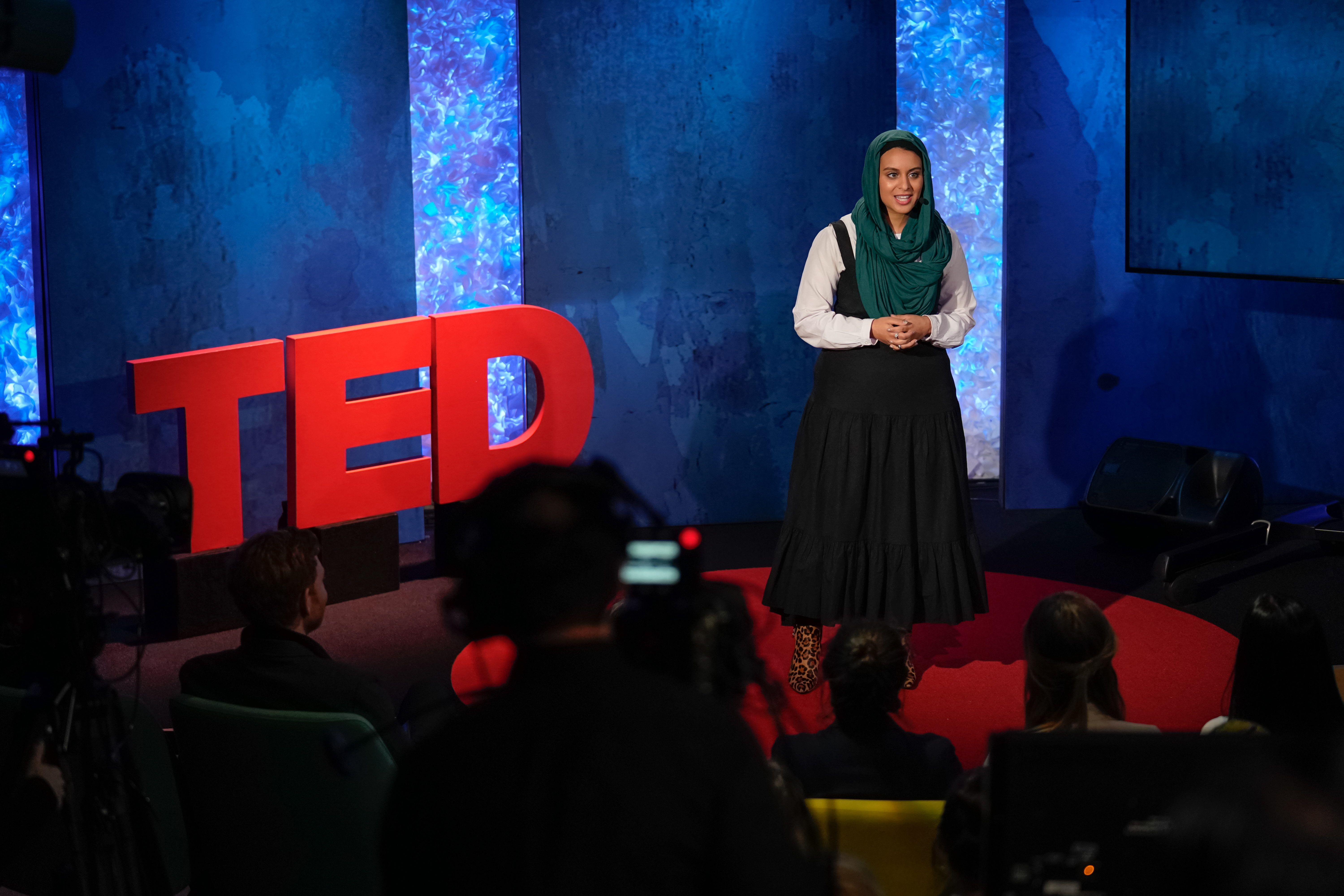 Rana Abdelhamid shares three ingredients to starting an international movement and her story of starting a self-defense class in her community. She speaks at TEDSalon: Up for Debate, January 16, 2019, at the TED World Theater in New York, NY. (Photo: Dian Lofton / TED)

The secret recipe to starting a movement. According to human rights organizer Rana Abdelhamid, there are three ingredients to creating an international movement: Start with what you know, start with who you know and, most important, start with joy. After a stranger aggressively tried to remove her hijab, the 16-year-old Abdelhamid (who happens to be a first-degree black belt) began teaching self-defense to women and girls in a community center basement. But she realized that she didn’t want the class to focus on fear — instead, she wanted her students to experience the class as an exercise in mental and physical well-being. That one class has evolved into Malikah, a grassroots organization spanning 17 cities in 12 countries that offers security and self-defense training that’s specific to wherever a person may live and how they walk through the world. 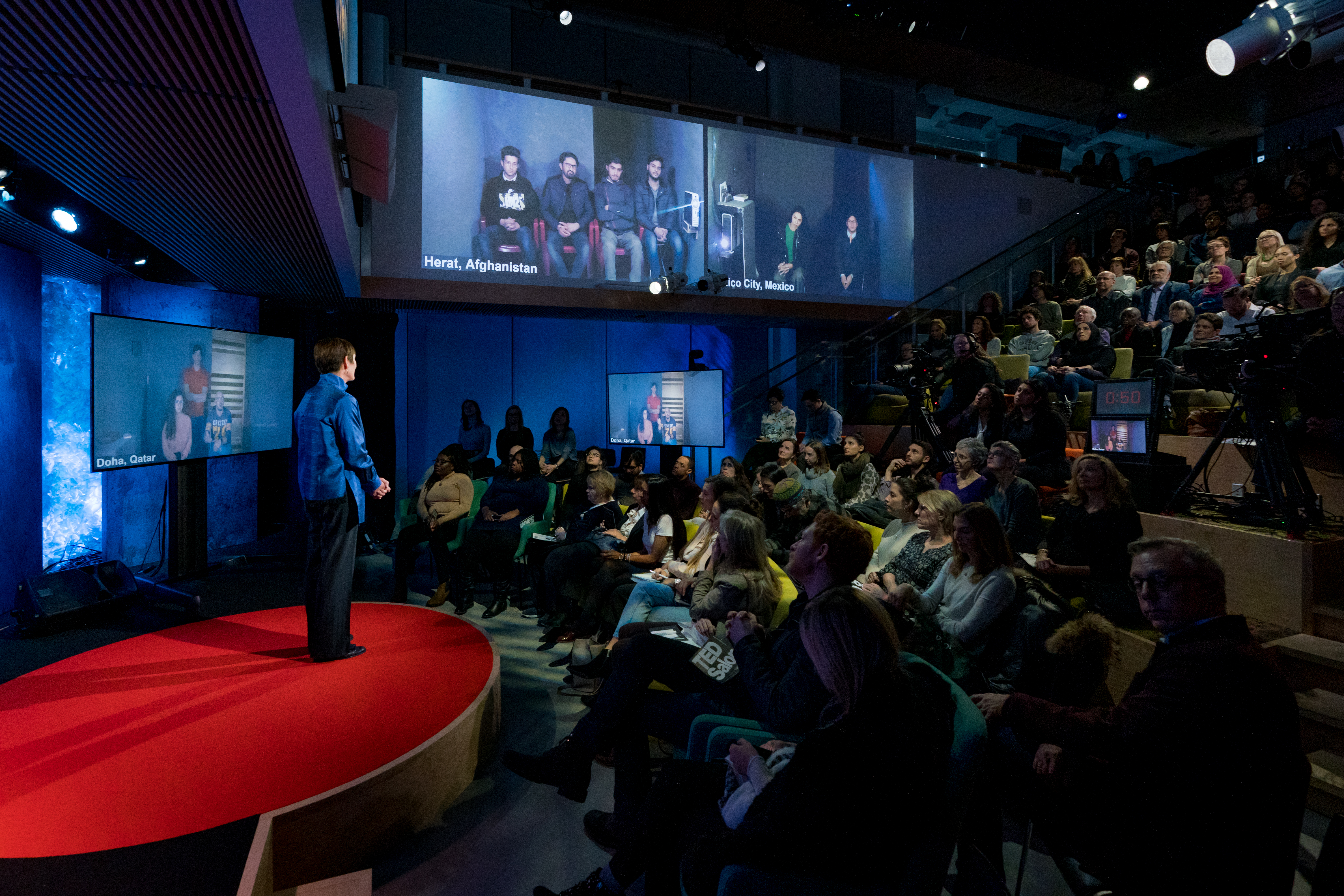 Audience members in a “Portal” in Doha, Qatar, speak live with salon host Cyndi Stivers, sharing their experiences with the media in their home country. (Photo: Ryan Lash / TED)

Next up, coming to us live from Doha, Qatar, a group of students who’ve gathered in a Shared_Studios Portal explains how the media has shaped their world — from employment to health to education and beyond. Some outlets have started promoting hate speech and fake news, they say, manipulating people in dangerous ways and sparking a debate about the role the media should play. We turn to the Portal in Mexico City, where students explain how, on the heels of their country’s recent transformative election, it’s becoming more important than ever to work together and understand that humanity is part of one force: “Now, kindness is the ultimate intelligence.”

Real dialogue is possible. Journalist Eve Pearlman is on a mission to bridge the political divide in the United States. With the help of her friend and fellow journalist Jeremy Hay, she founded Spaceship Media, dedicated to bringing together people on different sides of a political spectrum to create “dialogue journalism.” Their first dialogue asked Trump supporters from Alabama how they think Clinton voters in California perceive them — and vice versa. “By identifying stereotypes at the start of each project, we find that people begin to see the simplistic and often mean-spirited caricatures they carry,” Pearlman says, “and after that, we can move into the process of real conversation.” Pearlman and Hay want to bring trust back into journalism — moving away from clickbait reporting and toward transparency and care for the communities these journalists serve. When journalists and citizens come together in discussion, people that otherwise would have never met end up speaking with each other — and feeling grateful to know first-hand that the other side isn’t crazy, Pearlman says: “Real engagement across difference: this is the salve that our democracy sorely needs.” 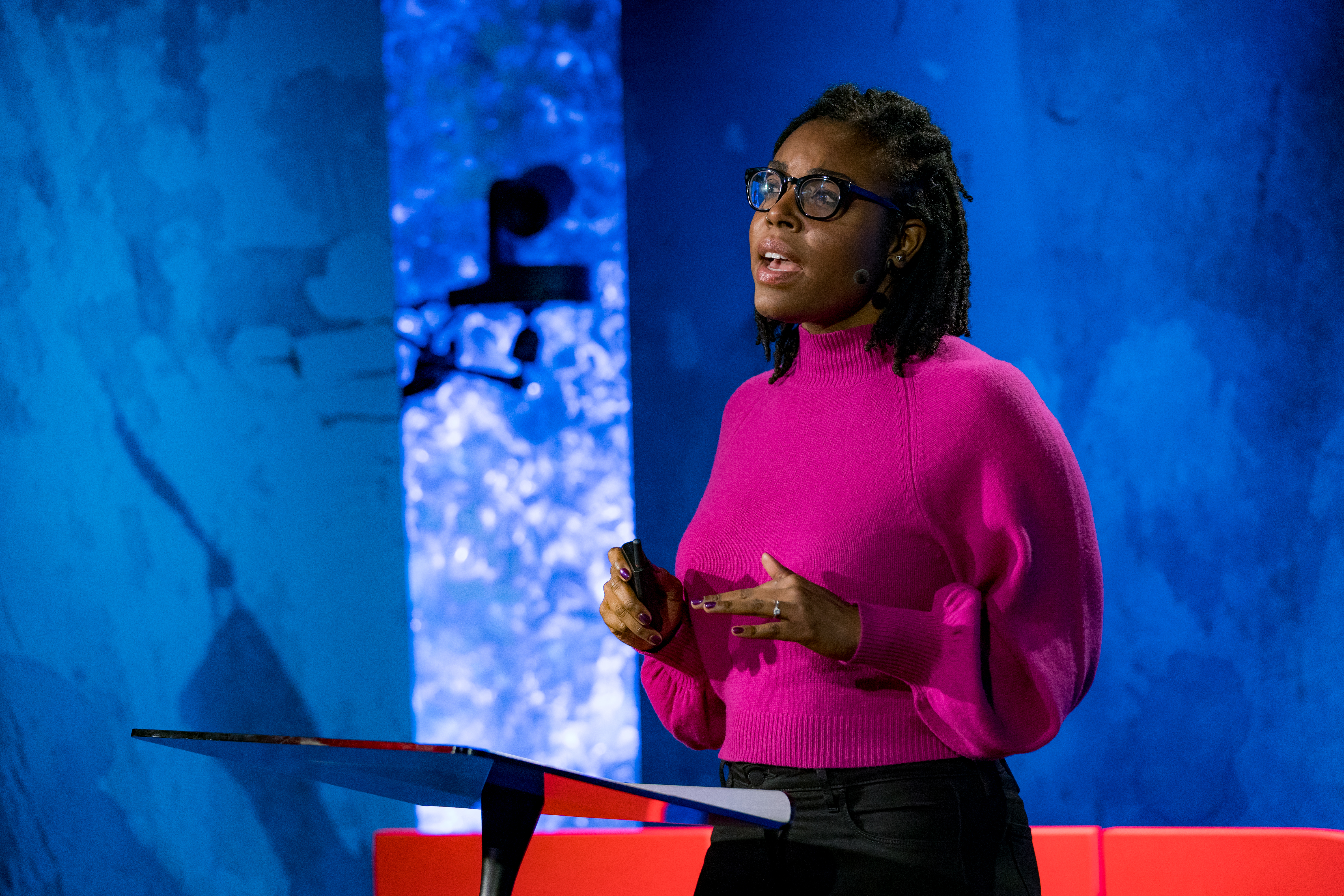 Are all millennials lazy, entitled avocado-toast lovers? Author Reniqua Allen calls on us to take a broader, more nuanced view — and specifically, to listen to the 43 percent of millennials who are non-white. She speaks at TEDSalon: Up for Debate, January 16, 2019, at the TED World Theater in New York, NY. (Photo: Ryan Lash / TED)

Why we need to listen to millennials — all of them. Millennials aren’t a monolith, says author Reniqua Allen, but too often, we treat them like they are. By simplifying millennials to a worn-out stereotype of lazy, entitled avocado-toast lovers, Allen warns that we erase the vast multitude of millennial backgrounds and experiences, particularly the unique experiences of black millennials. Millennials are the largest, most diverse adult population in the country, she says, and 43 percent are non-white. While researching her book It Was All a Dream, Allen heard from black millennials like Joelle, who couldn’t attend her dream school because it was too expensive; AB, an actor who fears racial bias is limiting his success in Hollywood; and Simon, a tech company CFO who gave up a passion for photography because he didn’t have the financial safety net to take the risk. “These kind of stories — the quieter, more subtle ones — reveal the unique and often untold story of black millennials, show how even dreaming may differ between communities,” Allen says. Though black creatives, politicians and athletes are thriving, racist structures and ideologies haven’t gone away — and they affect the everyday experiences of millennials across the country.

Next up, we check in with Kigali, Rwanda. The Rwandans in the Portal say that their most pressing issue is the trade war between Rwanda and the US. In 2016, the Rwandan government increased import duties on used clothing from the US in order to encourage domestic clothing production. Since then, the US has suspended certain trade benefits Rwanda receives under the African Growth and Opportunity Act — namely, those allowing Rwanda to export goods to the US without tariffs. They remind us that Rwanda is a young country; what’s on their mind is the need to build up self-dependence, in large part through the economic ability to dictate the prices of the goods they trade with the world. Meanwhile, in Herat, Afghanistan, participants in the Portal share how their community is trying to adapt to the international attitude. They’re eager for technology and social media to help meet and connect with people from other countries; they say that social media, in particular, has opened a gateway for women in Afghanistan.

Tweeting at a terrorist. Twitter is frequently “where you go to get yelled at by people you don’t know,” says counterterrorism expert and blogger Clint Watts. But it can also be a great place to interact with someone who’d otherwise be difficult to talk with — someone like Omar Hammami, a rapping terrorist who traded tweets with Watts in 2013. Hammami grew up in Mobile, Alabama, and Watts notes that had they ever met, “We probably would’ve shared a box of Krispy Kreme donuts.” Instead, Hammami joined the notorious terror group al Shabaab, where his Western background was exploited as propaganda — especially when he became a viral celebrity for his pro-jihad YouTube raps. Hammami eventually fell out with al Shabaab and, hunted by both counterterrorists and the mujahideen, hid in Somalia, where, bored and craving attention, he began obsessively tweeting. Using his training as a negotiator, Watts kept him talking, asking pointed questions about Hammami’s beliefs and goals in between banter about Chinese food and Reading Rainbow. Watts is clear to note, though, that they were never friends. Still, as Hammami’s murderous ex-comrades closed in to assassinate him, Watts wondered: “Did his thoughts reach for jihad and his faith, or did he reach for his family, his friends, his life back in Alabama, and the path he didn’t choose?”

The salon comes to a close with a Portal appearance from students in Hardy County, West Virginia. The most contentious topic in their area? Resistance to change. As one of the participants says: “People hold so tight to their family traditions and what they learned growing up.” Yet hope remains. The students see themselves as activists, looking to help those in their community who are brought down by discrimination and lack of acceptance.