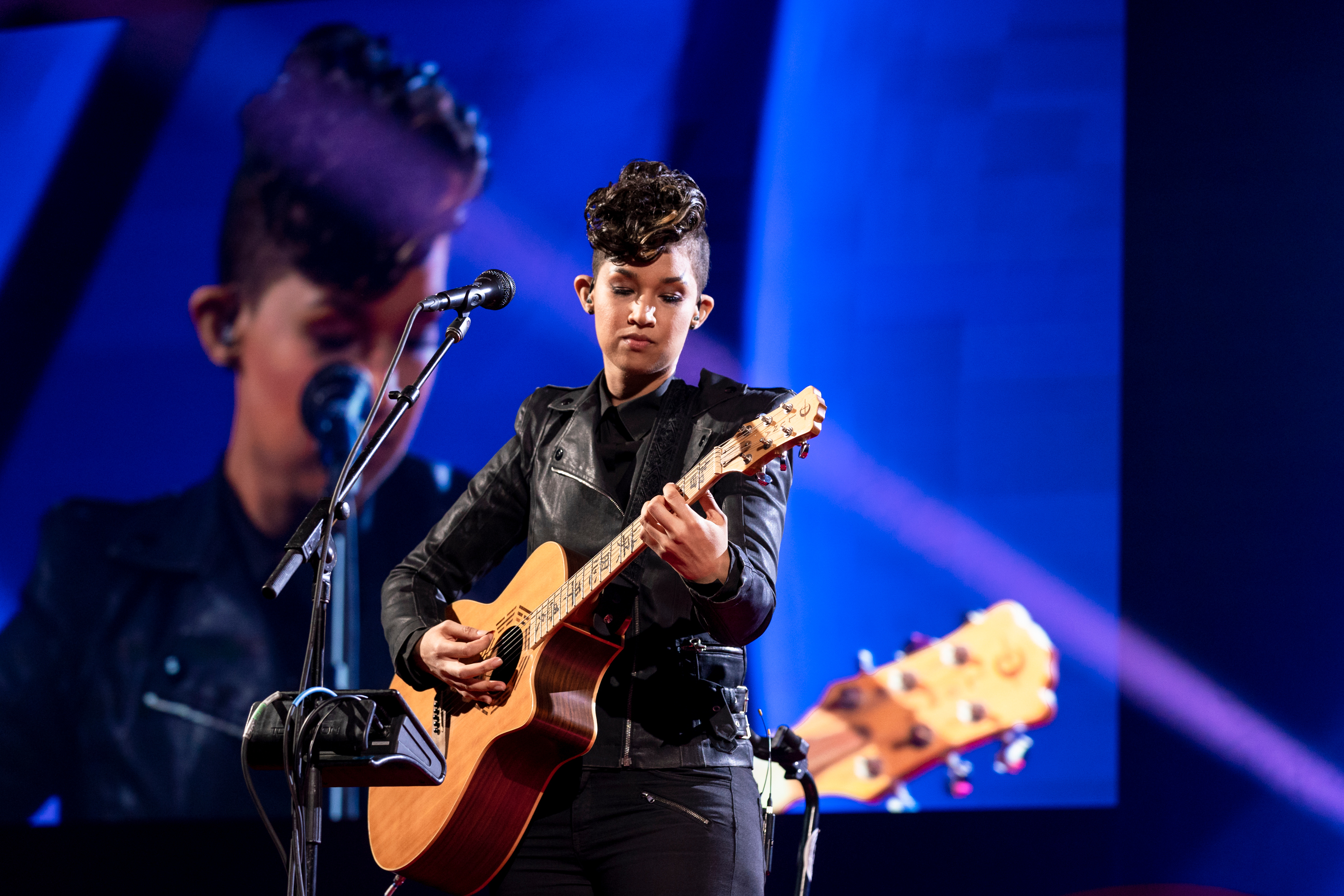 The final session of TEDWomen 2019 is here! We can’t believe it; we won’t believe. But, if we must close out these three incredible days, it’s good we did it by hearing from a diverse range of “wayfinders” — incredible women who are using their wisdom and insight to light the way forward, tackle global problems and find the right balance of fear and courage to do so.

Music: Singer-songwriter Butterscotch performs a virtuosic set, mixing beatboxing with her powerful voice to sing about love, life and everything in between.

Big idea: Victory does not always equal success. Leaders need to consider the cost of winning to those under our care and redefine success in empathetic and positive terms.

How? Across the world, a pervasive “win at all costs” culture is creating emotional and physical crises. When Valorie Kondos Field first started working with the UCLA women’s gymnastics team, she mimicked other “winning” coaches by being relentless, unsympathetic and outright mean. One day, her team sat her down and made a firm case against her top-down, bullying approach. The years that followed — and her deeply personal, trust-based work with champion athletes like Katelyn Ohashi and Kyla Ross — were a lesson in the importance of an empathetic approach. True champions, she says, derive joy from their pursuits — win or lose.

Quote of the talk: “Instead of focusing maniacally on winning, we need to have the courage to develop champions through empathy, positivity, and accountability.” 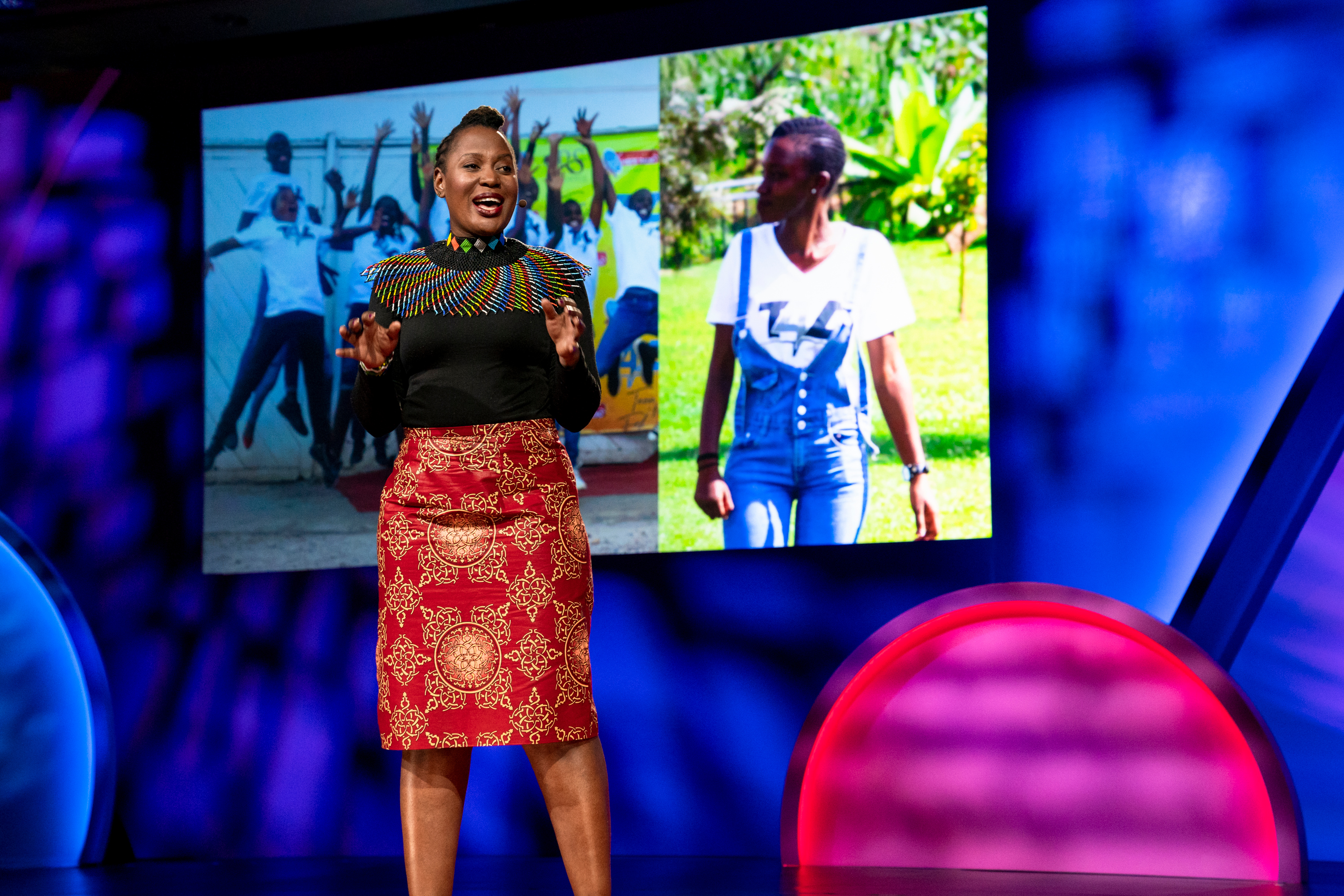 How do you find your passion? Noeline Kirabo provides some answers at TEDWomen 2019: Bold + Brilliant, on December , 2019, in Palm Springs, California. (Photo: Jasmina Tomic / TED)

Big idea: Almost everyone dreams of turning their passion into a successful career — but to do so, you must first identify what your passion is.

How? Passion isn’t only for the rich or the retired, says Noeline Kirabo. When she dropped out of school because she couldn’t afford the tuition, she didn’t settle for a job she didn’t love — instead, she decided to follow her passion. She founded Kyusa, a nonprofit dedicated to addressing youth unemployment in Uganda by helping young people turn their interests into careers and profitable businesses. Her organization provides the necessary support for them to build the future of their dreams, including soft skills and entrepreneurial training. But how do you discover your passion? She poses two questions to help you find the answer: If you had all the money and time in the world, what would you spend your time doing; and what truly makes you happy or gives you a deep sense of fulfillment? To find these answers, she says, we must look inward — not outward.

Big idea: Our laws and legal system are focused on punishment, but they should make more room for forgiveness.

Why?: In her 40 years of teaching law, Martha Minow has found that law students are not taught much about forgiveness. While the law itself does contain tools like pardons, commutations and bankruptcy for debt, they are not adequately used. Or, when they are used, they reinforce existing social inequities along the lines of race and class. Yet the benefits of mercy have been widely shown, not just for our own individual health, but also for the health of communities affected by criminal activity. Restorative justice, which emphasizes accountability and service rather than punishment, can disrupt the school-to-prison pipeline that has become a prominent issue in parts of the US, Minow says. Although placing more of an emphasis on forgiveness comes with the risk of bias, it also comes with the promise of creating a fairer future.

Quote of the talk: “To ask how law may forgive is not to deny the fact of wrongdoing. Rather, it’s to widen the lens to enable glimpses of the larger patterns.”

How? In 1996, Agnes Binagwaho returned to her home country of Rwanda to practice medicine in the aftermath of the country’s horrific genocide. The devastation was so pervasive she considered leaving, but resilient Rwandan women motivated her to stay and help rebuild. And she is glad she did. Today, Rwanda has the highest proportion of women in parliament — nearly 62 percent — and the most successful HPV vaccination campaign for children. More recently, Binagwaho helped open a medical school in Rwanda called University of Global Health Equity, which maintains gender parity and is free of charge, as long as students commit to working with vulnerable communities around the world.

Quote of the talk: “I have learned that if we focus on women’s education, we improve their lives positively, as well as the wellbeing of their community.”

Big idea: Around the world, insect species (including the monarch butterfly) are dying at an alarming rate. The looming demise of important pollinators (like bees and butterflies) will have dire consequences for human civilization. Citizen scientists could help save these insects — and the planet.

How? Citizen scientists — people without PhDs who leverage technology to collect data and organize initiatives to protect the natural world — are a crucial force for understanding complex natural phenomena. The same citizen scientists who documented plummeting monarch butterfly populations now work to save them (and other endangered species) through food-source cultivation, habitat preservation and efforts like the City Nature Challenge — a scalable data-gathering initiative supporting threatened species that cohabit our cities.

Quote of the talk: “Insect life is at the very foundation of our life-support systems. We can’t lose these insects.”

Big idea: We’re doing hunger wrong in America. We can eliminate hunger, reduce food waste and give families their dignity back through innovative technology, instead of charity.

How? While Food banks are beloved community institutions, they aren’t solving hunger, says Jasmine Crowe. They keep families dependent on their services and rarely offer a full meal. Scarcity isn’t the problem, Crowe reminds us: globally, one in nine people go hungry each day, yet food waste has increased by 50 percent since the 1970s. Crowe — who has spent her life giving back to the Atlanta community — is reengineering how cities handle hunger through Goodr, a tech-enabled sustainable food waste company. Their app gathers unused food from local businesses and distributes it to food deserts through nonprofits and popup grocery stores. Each of us has the power to join the movement to bring real food and dignity back to families.

Quote of the talk: “We wanted to change the way we think and approached the hunger fight, get people to believe that we could solve hunger — not as a charity, not as a food bank, but as a social enterprise with a goal of ending hunger and food waste.”

Big Idea: Courage is never instantaneous or easy. It’s a careful balance of bravery and fear.

How? After being diagnosed with Hereditary Inclusion Body Myopathy, a genetic condition that deteriorates muscle, Cara E. Yar Khan heard repeatedly that she had to limit her career ambitions and quiet her dreams. Instead, she actively pursued and accomplished her goals, working as a humanitarian in Angola with the UN and as a disability advocate in Haiti following the 2010 earthquake. She decided to descend to the base of the Grand Canyon, embarking on a harrowing 12-day trip: four days descending the canyon via horseback, and eight days of white water rafting through the Colorado River. Though terrifying, the trip showed her how powerful her courage could be, she says. Courage isn’t just a burst of bravery that appears when needed — it arises when we’re willing to take risks, acknowledge and prepare for our fears and become devoted to bringing our dreams to life.

Quote of the talk: “Without fear, you’ll do foolish things. Without courage, you’ll never step into the unknown. The balance of the two is where the magic lies, and it’s a balance we all deal with everyday.”

Why? We live in dangerous times, with nothing left to prove and much more to lose, says Pat Mitchell. The rise in sexism, racism and violence against women and girls, alongside the dire state of our planet, demands that we live dangerously. “I don’t mean being feared,” says Mitchell. “But I do mean being more fearless.” Mitchell knows this best from her own life blazing a path across media and television. On the TEDWomen stage, she shares how her own experiences informed her leadership decisions and vision of a future where women wield the power they already hold. (Read a full recap here.)

Quote of the talk: “At this point in my life’s journey, I am holding my splendid torch higher than ever, boldly and brilliantly — inviting you to join me in its dangerous light.”