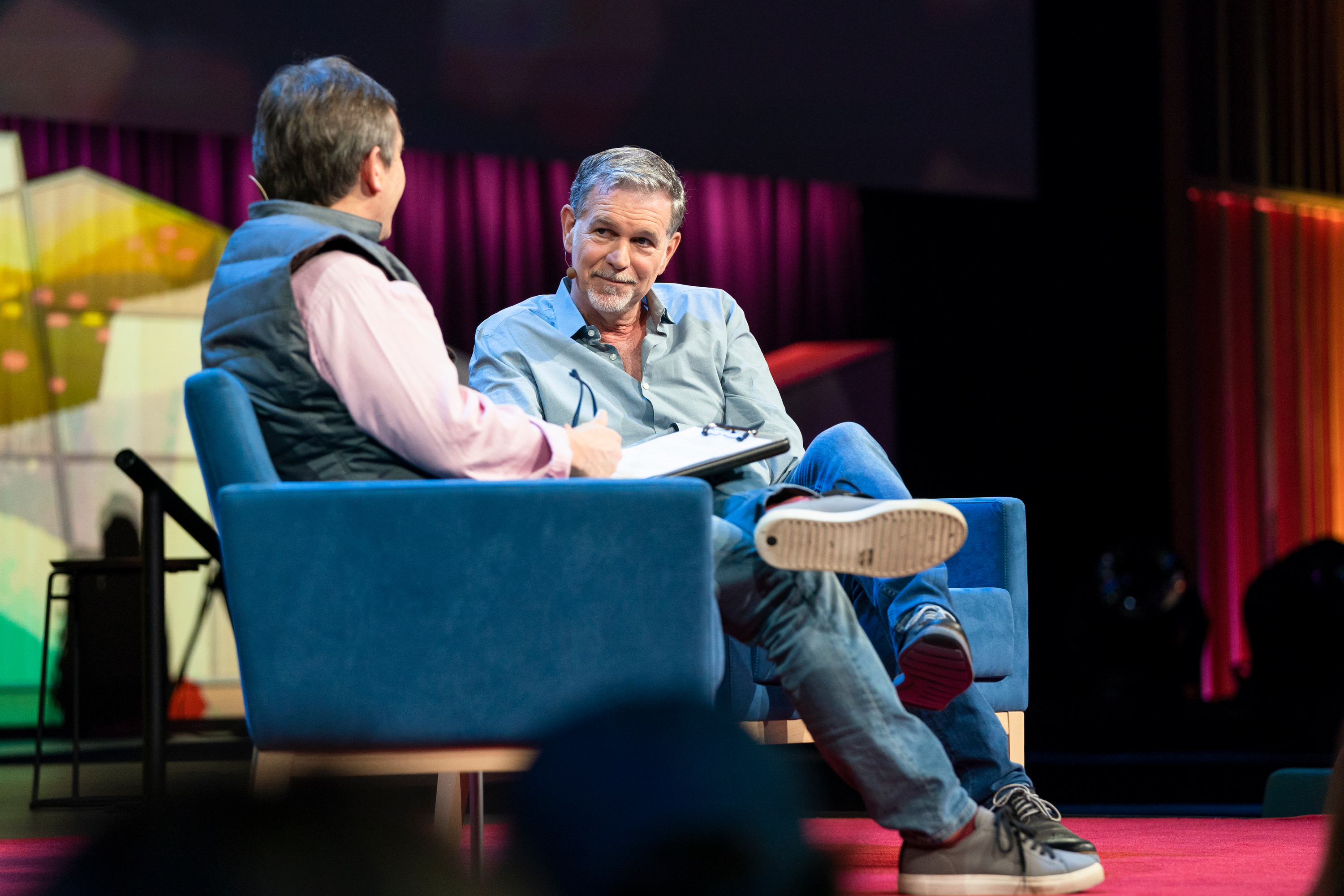 Reed Hastings, the head of Netflix, listens to a question from Chris Anderson during a sparky onstage Q&A on the final morning of TED2018, April 14, 2018. Photo: Ryan Lash / TED

What a week. We’ve heard so much, from dystopian warnings to bold visions for change. Our brains are full. Almost. In this session we pull back to the human stories that underpin everything we are, everything we want. From new ways to set goals and move business forward, to unabashed visions for joy and community, it’s time to explore what matters.

The original people of this land. One important thing to know: TED’s conference home of Vancouver is built on un-ceded land that once belonged to First Nations people. So this morning, two DJs from A Tribe Called Red start this session by remembering and honoring them, telling First Nations stories in beats and images in a set that expands on the concept of Halluci Nation, inspired by the poet, musician and activist John Trudell. In Trudell’s words: “We are the Halluci Nation / Our DNA is of earth and sky / Our DNA is of past and future.”

The power of why, what and how. Our leaders and our institutions are failing us, and it’s not always because they’re bad or unethical. Sometimes, it’s simply because they’re leading us toward the wrong objectives, says venture capitalist John Doerr. How can we get back on track? The trick may be a system called OKR, developed by legendary management thinker Andy Grove. Doerr explains that OKR stands for ‘objectives and key results’ – and setting the right ones can be the difference between success and failure. However, before you set your objective (your what) and your key results (your how), you need to understand your why. “A compelling sense of why can be the launch pad for our objectives,” he says. He illustrates the power of OKRs by sharing the stories of individuals and organizations who’ve put them into practice, including Google’s Larry Page and Sergey Brin. “OKRs are not a silver bullet. They’re not going to be a substitute for a strong culture or for stronger leadership, but when those fundamentals are in place, they can take you to the mountaintop,” he says. He encourages all of us to take the time to write down our values, our objectives, and our key results – and to do it today. “Let’s fight for what it is that really matters, because we can take OKRs beyond our businesses. We can take them to our families, to our schools, even to our government. We can hold those governments accountable,” he says. “We can get back on the right track if we can and do measure what really matters.”

What’s powering China’s tech innovation? The largest mass migration in the world occurs every year around the Chinese Spring Festival. Over 40 days, travelers — including 290 million migrant workers — take 3 billion trips all over China. Few can afford to fly, so railways strained to keep up, with crowding, fraud and drama. So the Chinese technology sector has been building everything from apps to AI to ease not only this process, but other pain points throughout society. But unlike the US, where innovation is often fueled by academia and enterprise, China’s tech innovation is powered by “an overwhelming need economy that is serving an underprivileged populace, which has been separated for 30 years from China’s economic boom.” The CEO of the China Morning Post, Gary Liu has a front-row seat to this transformation. As China’s introduction of a “social credit rating” system suggests, a technology boom in an authoritarian society hides a significant dark side. But the Chinese internet hugely benefits its 772 million users. It has spread deeply into rural regions, revitalizing education and creating jobs. There’s a long way to go to bring the internet to everyone in China — more than 600 million people remain offline . But wherever the internet is fueling prosperity, “we should endeavor to follow it with capital and with effort, driving both economic and societal impact all over the world. Just imagine for a minute what more could be possible if the global needs of the underserved become the primary focus of our inventions.”

Netflix and chill, the interview. The humble beginnings of Netflix paved the way to transforming how we consume content today. Reed Hastings — who started out as a high school math teacher — admits that making the shift from DVDs to streaming was a big leap. “We weren’t confident,” he admits in his interview with TED Curator Chris Anderson. “It was scary.” Obviously, it paid off over time, with 117 million subscribers (and growing), more than $11 billion in revenue (so far) and a slew of popular original content (Black Mirror, anyone?) fueled by curated algorithmic recommendations. The offerings of Netflix, Hastings says, is a mixture of candy and broccoli — and it allows people to decide what a proper “diet” is for them. “We get a lot of joy from making people happy,” he says. The external culture of the streaming platform reflects its internal culture as well: they’re super focused on how to run with no process, but without chaos. There’s an emphasis on freedom, responsibility and honesty (as he puts it, “disagreeing silently is disloyal”). And though Hastings loves business — competing against the likes of HBO and Disney — he also enjoys his philanthropic pursuits supporting innovative education, such as the KIPP charter schools, and advocates for more variety in educational content. For now, he says, it’s the perfect job.

“E. Pluribus Unum” — ”Out of many, one.” It’s the motto of the United States, yet few citizens understand its meaning. Artist and designer Walter Hood calls for national landscapes that preserve the distinct identities of peoples and cultures, while still forging unity. Hood believes spaces should illuminate shared memories without glossing over past — and present — injustices. To guide his projects, Hood follows five simple guidelines. The first — “Great things happen when we exist in each other’s world” — helped fire up a Queens community garden initiative in collaboration with Bette Midler and hip-hop legend 50 Cent. “Two-ness” — or the sense of double identity faced by those who are “othered,” like women and African-Americans — lies behind a “shadow sculpture” at the University of Virginia that commemorates a forgotten, buried servant household uncovered during the school’s expansion. “Empathy” inspired the construction of a park in downtown Oakland that serves office workers and the homeless community, side-by-side. “The traditional belongs to all of us” — and to the San Francisco neighborhood of Bayview-Hunter’s Point, where Hood restored a Victorian opera house to serve the local community. And “Memory” lies at the core of a future shorefront park in Charleston, which will rest on top of Gadsden Wharf — an entry point for 40% of the United States’ slaves, where they were then “stored” in chains — that forces visitors to confront the still-resonating cruelty of our past.

The tension between acceptance and hope. When Simone George met Mark Pollock, it was eight years after he’d lost his sight. Pollock was rebuilding his identity — living a high-octane life of running marathons and racing across Antarctica to reach the South Pole. But a year after he returned from Antarctica, Pollock fell from a third-story window; he woke up paralyzed from the waist down. Pollock shares how being a realist — inspired by the writings of Admiral James Stockdale, a Vietnam POW — helped him through bleak days after this accident, when even hope seemed dangerous. George explains how she helped Pollock navigate months in the hospital; told that any sensation Pollock didn’t regain in the weeks immediately after the fall would likely never come back, the two looked to stories of others, like Christopher Reeve, who had pushed beyond what was understood as possible for those who are paralyzed. “History is filled with the kinds of impossible made possible through human endeavor,” Pollock says. So he started asking: Why can’t human endeavor cure paralysis in his lifetime? In collaboration with a team of engineers in San Francisco, who created an exoskeleton for Pollock, as well as Dr. Reggie Edgerton’s team at UCLA, who had developed a way to electrically stimulate the spinal cord of those with paralysis, Pollock was able to pull his knee into his chest during a lab test, proving that progress is definitely still possible. For now, “I accept the wheelchair, it’s almost impossible not to,” says Pollock. “We also hope for another life — a life where we have created a cure through collaboration, a cure that we’re actively working to release from university labs around the world and share with everyone who needs it.”

The pursuit of joy, not happiness. “How do tangible things make us feel intangible joy?” asks designer Ingrid Fetell Lee. She pursued this question for ten years to understand how the physical world relates to the mysterious, quixotic emotion of joy. In turns out, the physical can be a remarkable, renewable resource for fostering a happier, healthier life. There isn’t just one type of joy, and its definition morphs from person to person — but psychologists, broadly speaking, describe joy as intense, momentary experience of positive emotion (or, simply, as something that makes you want to jump up and down). However, joy shouldn’t be conflated with happiness, which measure how good we feel over time. So, Lee asked around about what brings people joy and eventually had a notebook filled with things like beach balls, treehouses, fireworks, googly eyes and ice cream cones with rainbow sprinkles, and realized something significant: the patterns of joy have roots in evolutionary history. Things like symmetrical shapes, bright colors, an attraction to abundance and multiplicity, a feeling of lightness or elevation — this is what’s universally appealing. Joy lowers blood pressure, improves our immune system and even increases productivity. She began to wonder: should we use these aesthetics to help us find more opportunities for joy in the world around us? “Joy begins with the senses,” she says. “What we should be doing is embracing joy, and finding ways to put ourselves in the path of it more often.”

And that’s a wrap. Speaking of joy, Baratunde Thurston steps out to close this conference with a wrap that shouts out the diversity of this year’s audience but also nudges the un-diverse selection of topics: next year, he asks, instead of putting an African child on a slide, can we put her onstage to speak for herself? He winds together the themes of the week, from the terrifying — killer robots, octopus robots, genetically modified piglets — to the badass, the inspiring and the mind-opening. Are you not amazed?