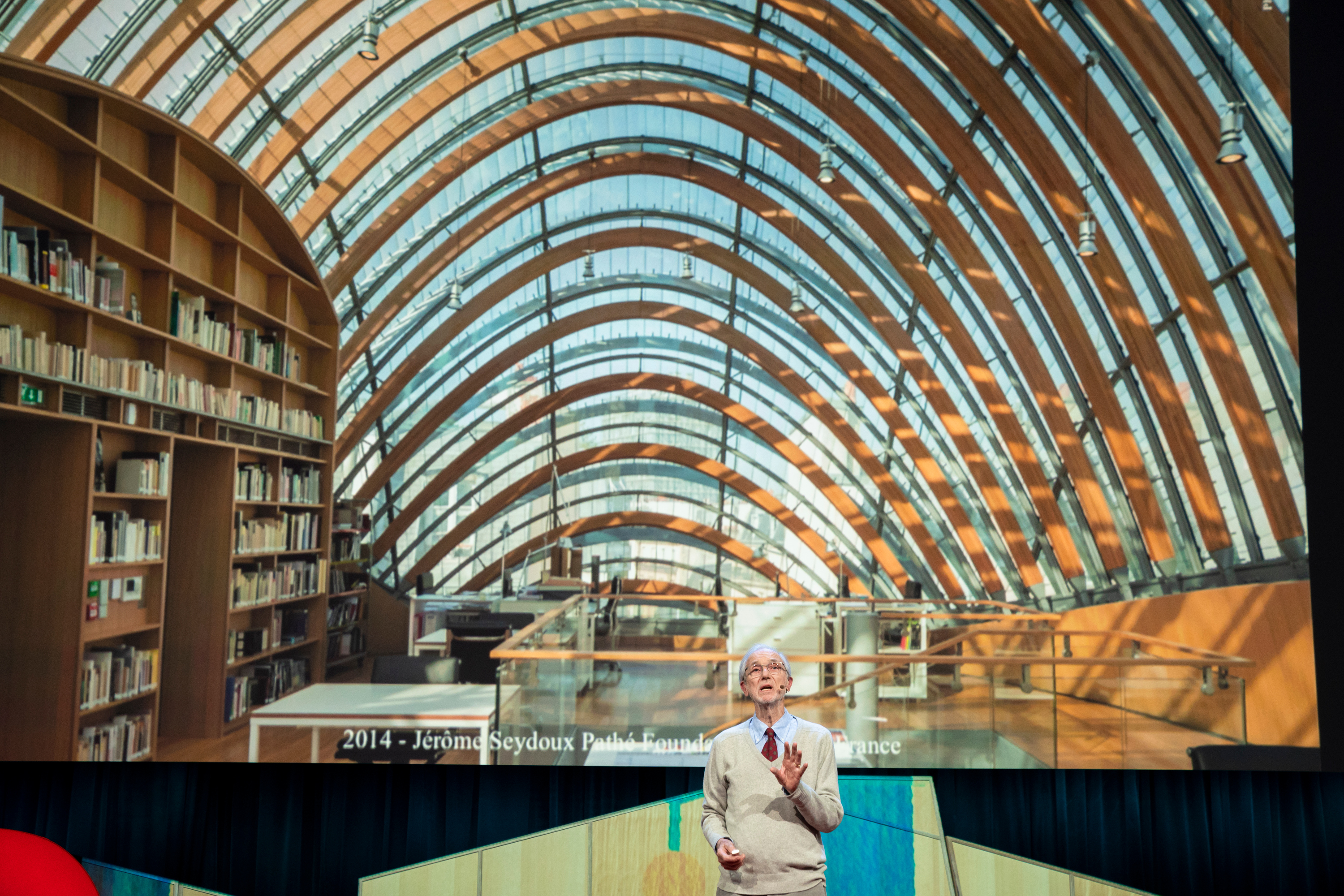 Renzo Piano makes the case for beauty in architecture during TED2018: The Age of Amazement, April 12, 2018, in Vancouver. Photo: Bret Hartman / TED

What we need sometimes is a little awe, a little wonder. This session of TED Talks was designed to provoke an exquisite human emotion: the sense that the world is bigger and stranger than you’d known. Without further ado, wow.

A blueprint for how humans and machines can coexist. American researchers are leading AI discoveries, Chinese engineers are leading AI implementations like speech recognition and machine translation, and taken together, they will bring about a technological revolution that will pose major challenges to society. All types of jobs will be replaced by AI in the near-future, from radiologists to truckers. “But what’s more serious than the loss of jobs is the loss of meaning,” says investor Kai-Fu Lee, “because the work ethic in the Industrial Age has brainwashed us into thinking work is the reason we exist, that work defines the meaning of our lives.” Lee confesses that for many years, he was guilty of being a workaholic — nearly missing the birth of his daughter to give a presentation to Apple’s CEO– until he was diagnosed with Stage IV lymphoma five years ago. The experience made him realize that his priorities were completely out of order, but it also gave him a new view about what AI should mean for humanity. “AI is taking away a lot of routine jobs, but routine jobs are not what we’re about. Why we exist is love,” he says. He explains how we might harness human compassion – along with human creativity — to work with AI in a way that may help solve both the loss of jobs and the loss of meaning.

Personalized music composition through AI. Wouldn’t it be nice to finally have the perfect soundtrack for your life? Perhaps that pensive, melancholic song when you’re feeling down, or an upbeat tune when you’ve just received great news. Well, engineer and musician Pierre Barreau is making your personalized playlist a reality through AI. Barreau created an AI technology called AIVA, or Artificial Intelligence Visual Artist. He taught AIVA the art of music composition by inputting 30,000 scores from history’s greatest composers. “Using deep neural networks, AIVA looks for patterns in these scores.” he says. “From a couple of bars of existing music from an existing score, [AIVA] infers what should come next in those tracks. Once AIVA gets good at these predictions, it can actually build a set of mathematical rules for that style of music in order to create its own original compositions.” To make music unique to each person, he also taught AIVA to understand what makes a musical score emotionally unique by matching scores to different categories, including mood and note density. While personalized AI-generated music has clear applications for immersive media storytelling, like video games, it also has the power to better tell our life narratives. “This moment here together at TED is now a part of our life story. So it only felt fitting that AIVA would compose music for this moment.” Barreau concludes by playing a brief, mesmerizing song by AIVA, fittingly titled, “The Age of Amazement.”

A retrospective in the pursuit of beauty. “Architecture is the art of making shelter for human beings,” says architect Renzo Piano. Throughout his prolific career, Piano has designed some of the most recognizable buildings across the world; notables include the Centre Georges Pompidou in Paris, The Shard in London and the Whitney Museum of Art in New York City, part of an impressive body of work spanning decades. When he sets out to create these buildings, he looks for them to the flirt with the surrounding world — with water, wind, and even light — and communicate with humanity’s most universal language: beauty. Real beauty, he believes, is when the invisible joins the visible. And this doesn’t just apply to art or nature, it can relate to science and human curiosity as well. “This universal beauty is one of the few thing that can change the world,” he says. “Believe me this beauty will change the world, one person at a time.”

Hope for the organ transplant shortage — inside a baby pig. Every day, thousands of people wait for a desperately needed organ replacement — and by the end of today, 20 people will have died waiting. For almost half a century it’s been thought to be theoretically possible to transplant organs from pigs into humans, because pigs are similar enough to humans biologically and about the same size. But as scientist Luhan Yang puts it, there was one major problem: “The pig genome has a dangerous virus that does not express in pigs, but can be transmitted to humans.” If the virus, PERV, migrated to humans through a transplanted organ, it could spark a deadly HIV-like epidemic. So research had stalled, but Yang decided to dig in. Using CRISPR, a technique for editing genes, she and her lab have been working to create a pig without PERV in its genome. Difficulty: PERV expresses in 62 places on the pig genome. She shows a picture of Laika, one of the more than 30 PERV-free pigs her lab has bred. They may represent an exciting first step toward solving the organ transplantation crisis. After the talk, co-host Chris Anderson asks Yang for a timeline; she demurs at first but then says “We hope that it happens within one decade.”

CSI: Fingerprints. TV crime dramas are credited with luring people, particularly young women, into the field of forensic science; they’re drawn by the combination of conducting serious lab work and helping catch the bad guys. Seeing a talk from Sheffield Hallam University analytical chemist Simona Francese about her fascinating research might have that same impact. An expert in fingerprint analysis, Francese says: “Molecules are the storytellers of who are we and what we’ve been up to. We just need to have the right technology to make them talk.” Through her work, she is revealing the tales to be found in the microscopic remnants that we all leave behind. A person’s prints can contain three types of molecules: ordinary sweat molecules; molecules of substances that we’ve introduced into our bodies and sweat out; and molecules of stuff that’s adhered to our hands. Francese and her team achieve their breathtakingly detailed analyses by using UV lasers — which release the molecules in fingerprints — and mass spectrometry imaging technology, which then measures the mass of those molecules, pinpointing what they are. They’ve been able to detect thousands of different molecules in a single print. They can also visualize the distribution of each molecule on the fingerprint — which allows them to separate prints when they’re overlapping, something that tends to stymie the police. Their work can also fill in faint prints by improving ridge pattern continuity and clarity. In 2017, law enforcement in the UK and in other parts of Europe began using Francese’s technology in their criminal investigations.

Sometimes it’s awesome to be sad. “I love depressing songs,” says Luke Sital-Singh, “songs of sorrow, of grief, of longing … because they speak to a very real part of being human.” Accompanied only by a piano on a dark stage, the singer-songwriter performed two gorgeous and melancholic ballads, “Afterneath” and “Killing Me,” leaving many in the audience in tears, including our co-host.

Conquering physical and mental mountains. Not many people would consider being stuck between a rock and … another rock … nearly 3,000 feet off the ground without a rope to be one of the best moments of their life. But for Alex Honnold, it was the cumulation of a nearly two-decade-long dream. On June 3, 2017, at the age of 31, Honnold became the only person to summit El Capitan, a nearly 3,000-foot climb in Yosemite National Park, without a rope. This is a style of climbing known as free soloing, and one that Honnold is recognized for internationally. During his talk, Honnold shared how preparing for El Capitan required as much mental exercise as it did physical. He spent a year rehearsing not only every physical move, but every thought and doubt he could have on the wall. “Doubt is the precursor to fear, and I knew that I couldn’t experience my perfect moment if I was afraid.” In the end, he had his perfect moment, soaring up the wall that takes the average climber three days to summit in a mere three hours and fifty-six minutes. Honnold’s talk ended with a standing ovation and a final note from Chris Anderson: “Don’t share this talk with your children, please.” — Michaela Eames