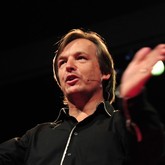 I'm a Brit, born in a remote village in Pakistan, in 1957, and spent my early years in Pakistan, India and (pre-war, beautiful) Afghanistan, where my father worked as a missionary eye surgeon. I have two sisters—one is five years older than the other, and I'm right in the middle.

Become a TED member and help build a better future

An invitation to join a special new membership at TED. Learn more at ted.com/membership Dear TED Friend, First of all, thank you for watching TED Talks. We’d be nothing without our global community of lifelong learners. We have something new and truly special to offer you. A membership that can take your engagement with TED […]

Have an anonymous TED Talk? We want to hear it.

Today you may have heard that TED announced a rather unusual experiment with Audible. I’m pretty excited about what we’re doing here and want to share some thoughts on “Sincerely, X”

Today, you can see TED.com’s fresh new homepage design, the visual manifestation of our ongoing work to make sure that TED remains as relevant and vital now as it was when we shared our first six talks back in 2006.

How did Nick Hanauer get onto TED’s home page?!

There’s a bit of a back story behind today’s TED Talk, in which Nick Hanauer issues a powerful warning to his fellow zillionaire ‘plutocrats’ that it’s time to take the inequality issue seriously, and makes the case to dramatically raise the minimum wage. Some of you may remember that two years ago there was an online spat between […]

I want to give you the back story behind today’s TED Talk and make the case that it’s one of the most significant we’ve ever posted. And I’m not just talking about its incredible animation. I’m talking about its core idea. Two years ago the psychologist Steven Pinker and the philosopher Rebecca Newberger Goldstein, who are […]

After an 18 month labor of love, we formally launched the new version of our website today.  Here are six things I’m proud of: 1. The team used every opportunity to engage you, our audience, in the new site’s conception, testing and rollout. So your highest priorities were our highest priorities. Beta versions of the site have been […]

TED not a recipe for ‘civilisational disaster’

This morning, The Guardian published this essay written by TED’s curator, Chris Anderson, in response to a column in the paper last week. In this essay, he dives into the misconception that TED Talks oversimplify complex subjects, and explains why we as a company are dedicated to the principle that knowledge should be shared. Seven years ago when TED Talks debuted online, […]

9 reasons to be excited by the new TED Books app

Via TED Curator Chris Anderson’s personal blog: After a couple of weeks in beta, the new TED Books app launched today on iPad and iPhone and I’m incredibly excited about it. Here’s why. 1. It brings together all of our authors in one irresistible package. 16 current titles with new ones to be released every […]

TED’s Curator, Chris Anderson, writes this personal note on his blog: Today marks a big new chapter in the TED story, as we unveil the first part of our TED-Ed initiative. Viewed one way, it’s just the release on YouTube of a dozen short videos created for high school students and lifelong learners. But we’re […]

Photo: Duncan Davidson Bryan Stevenson’s talk inspired one of the longest and loudest standing ovations in TED’s history. And it provoked a blizzard of requests from audience members that we find a way to support the work of his nonprofit organization, the Equal Justice Initiative. When I asked Bryan about funding needs, this is what […]

The warmest of warm welcomes to our millionth fan on TED’s Facebook page … and all 999,999 who came before. You’re right at the heart of the global TED community, and we really love being able to connect with you every day on Facebook. Collectively you’re an amazing army of idea spreaders. THANK YOU. — […]

Winners of Ads Worth Spreading run on TED.com (free) this week. Let us know what you think

There’s a fun new feature on TED.com this week. All the video ads that follow our talks have been specially chosen by a panel of judges as “Ads Worth Spreading.” They were selected from more than 1,000 entries as being especially powerful, funny, beautiful or engaging. We invite you to view them here and join […]

Enter the Ads Worth Spreading Challenge

There’s a worrying trend in online advertising. Many sites are reporting falling click-through rates — and marketers are responding by resorting to ever more aggressive ways of ambushing your attention. We’re launching an initiative to find a better way! TED’s mission is “ideas worth spreading.” You, our audience, are expert at identifying the things that […]

NYU professor Clay Shirky gave a fantastic talk on new media during our TED@State event earlier this month. He revealed how cellphones, the web, Facebook and Twitter had changed the rules of the game, allowing ordinary citizens extraordinary new powers to impact real-world events. As protests in Iran exploded over the weekend, we decided to […]

Announcing the launch of TEDx — and our first TEDxTalk from TEDxUSC

We’re excited to announce the launch of TEDx, a program of local, self-organized events that bring people together to share a TED-like experience. As you know, nearly three years ago, we starting posting our TEDTalks freely online. Ever since then, hundreds of people have been sharing TEDTalks in independently organized group settings — in private […]