What does it mean to belong? For many, belonging provides the foundation of all comfort, a sense of conviction that others have your back, that all will be well. But sometimes belonging can be less tangible, more illusory or fleeting — it can disappear without warning.

At TED Salon: Belonging — an evening of talks curated and co-hosted by TED’s head of curation, Helen Walters, and curation coordinator Lorena Aviles Trujilo — six speakers explored what belonging is really all about. They shared personal meditations on where they find hope for a more welcoming world and shone a light on the breakthroughs and ideas that might get us there. After an effusive, joyful performance of “Woke Up This Morning (With My Mind Stayed on Freedom)” by the Resistance Revival Chorus, the session kicked off with attorney Mónica Ramírez. 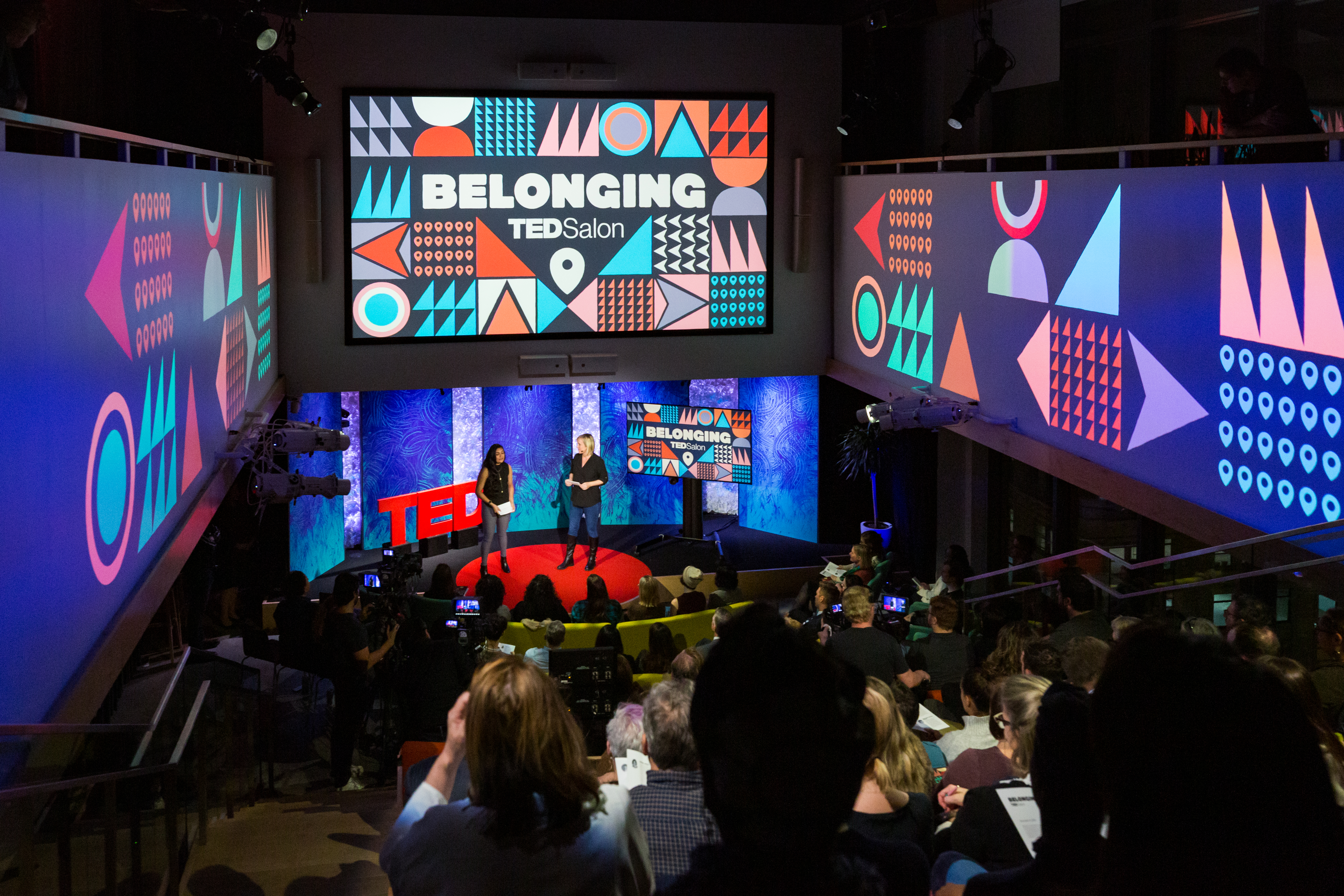 Elevate those who pick, pack and plant the food we eat every day. Marginalized people are not looking for saviors, says attorney Mónica Ramírez: “They’re looking for individuals who will support them, as day by day they get up and do the best they can to save themselves.” As the daughter and granddaughter of migrant farm workers, Ramírez knows firsthand the problem that affect these often-unseen and isolated groups — from wage theft and sexual harassment to dangerous working conditions. She has been an advocate for these communities nearly her entire life, and what she’s learned is both simple and profound: “If we want to solve problems, we need to call on the very best experts who can bring the very best solutions.” The experts she has in mind? The people directly impacted by some of society’s worst problems, who are best suited to share their truths with the world. Advocates like Ramírez, and citizens in solidarity, must make space for the voices not commonly heard. 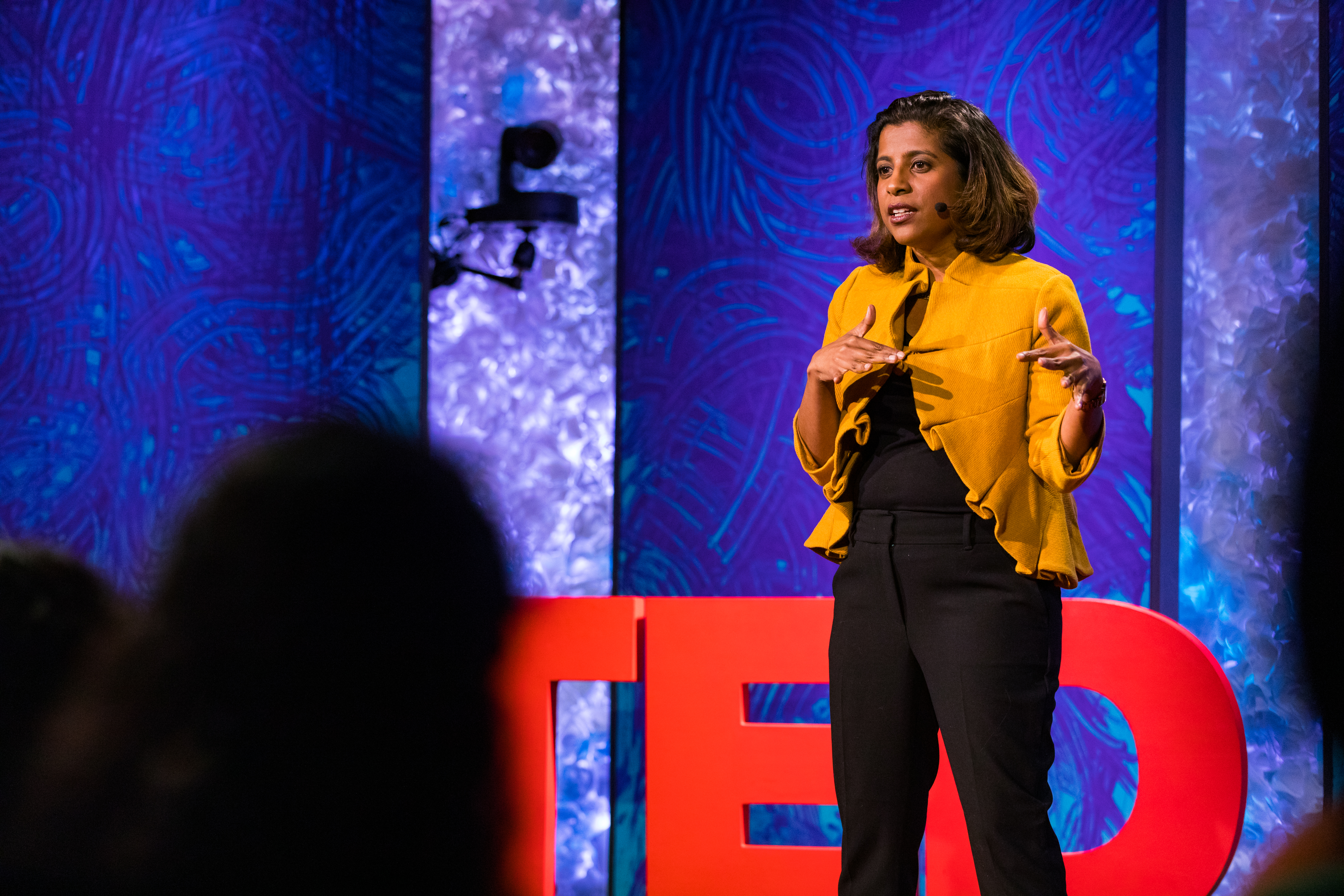 Chitra Aiyar encourages her students to see each other as teammates working toward the same goals — and grow together along the way. She speaks at TED Salon: Belonging, held on December 11, 2018, at the TED World Theater in New York City. (Photo: Ryan Lash / TED)

Build community when you feel isolated. As the executive director of the Sadie Nash Leadership Project, Chitra Aiyar works to help low-income youth of color develop the skills they need to thrive in college. When some of the college students Aiyar works with described feeling alienated on campus, she realized they would need to find real community if they were going to succeed. The research backs this up: only 11 percent of low-income first-generation students graduate from college after six years, and 45 percent drop out after their first year. “If you are spending energy thinking about whether you belong, you can’t concentrate on school … and every challenge, every hardship is a reinforcement [of that],” Aiyar says. To combat this, she encourages her students to cultivate spaces for other marginalized students to connect and help each other grow. She was inspired by the pre-med program at Xavier University — where, instead of pitting students against each other by warning of high dropout rates, professors encourage students to see each other as teammates working toward the same goals. Aiyar details three steps to move toward this new kind of community: first, imagine your goal and broaden it beyond yourself; then, start an activity that connects you to others with similar goals — like offering feedback on a classmate’s paper; and finally, take the opportunity to redefine your relationship to your community. Instead of feeling outcast, Aiyar says, her students could see themselves as actively engaged in a larger community that supports them. “We all have times that we don’t feel like we belong,” she says. “If we take the time to make sure that other people belong, in that process, we’ll find belonging as well.”

Reimagining the US-Mexico border wall. What is a border? It’s a line on a map, a place where cultures, languages and beliefs mix and merge. And it’s a place of beautiful, sometimes violent and occasionally ridiculous complexity, says architectural researcher Ronald Rael. Rael studies the US-Mexico border, where nearly 700 miles of wall divide the two countries — “an arcane, medieval architecture … an overly simplistic response to a complex set of issues,” he says. It’s estimated that the wall approved in 2006 will cost $49 billion to construct and maintain over the next 25 years — not including the additional $70 billion estimated for the walls currently proposed. Beyond that, there’s the human toll: more than 7,000 people have died trying to cross the border. To communicate the financial and human cost of the wall, Rael designs moving, sometimes satirical souvenirs — things like postcards, “bordergames” and snow globes that reimagine the social and economic realities of the border. They nod to activities like “wall y ball,” a borderland version of volleyball played across the wall, or patrol agents purchasing treats from vendors through the divide — activities that question the meaning of a “wall.” “There are not two sides defined by a wall — it is one landscape divided,” he says. “We should be designing a ‘Reunited States,’ not a ‘Divided States.'”

We belong to the living world. What do poetry and astrophysics have in common? More than you would expect, says poet Marie Howe. Howe is a professor of “ecopoetry,” which asks the human ego to step outside the picture — “to let the whole living world move into the poem, instead of the human, I, I, I, I.” Reading her poem “The Singularity,” which is inspired by the physics that created the earth, she plays on a big idea: that more than 13 million years ago everything that existed was incredibly small — tiny, compacted density. Physicist Stephen Hawking called this tiny dense material “the singularity,” giving birth to the title of her poem. Howe reads with passion, the final line reverberating through the room: “No I, no we, no one. No was. No verb. No noun. Only a tiny tiny dot brimming with is is is is is. All. Everything. Home.” 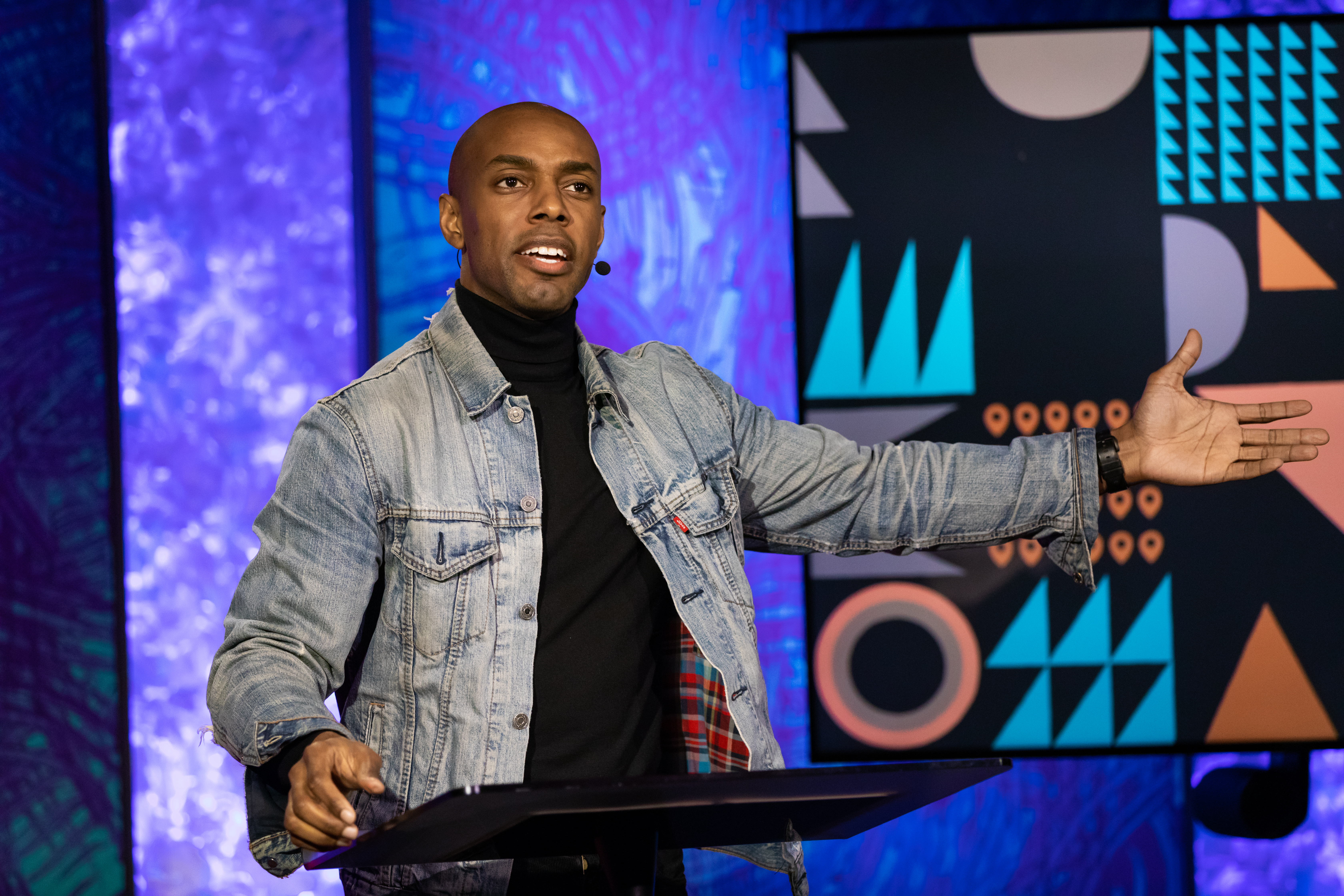 Too often, we reduce our lives to untrue, uncomplicated stories just to fit in, says Casey Gerald. Speaking at TED Salon: Belonging, Gerald encourages us to embrace vulnerability and embody “the raw strange magic of ourselves.” (Photo: Ryan Lash / TED)

The price of perfection. “The way we’re taught to live has got to change,” says Casey Gerald. By his late 20s, Gerald was on top of the world, or so it seemed: he had earned degrees from Yale and Harvard, worked on Wall Street and in Washington, started a nonprofit, and yes, given a TED Talk. Still, he recalls, “I was real cracked up — not exactly having a nervous breakdown, but not too far off.” While he’d attained success, he had done so while buffing away the raw edges of his life — his homosexuality, his pain, his very human messiness — and reducing it to an uncomplicated, untrue story of a poor kid “from the other side of the river” who made it. Many of us engage in similar acts of revision just so we can be accepted by the right people, schools and jobs, Gerald says — but he’s come to realize this revision is equivalent to self-erasure. He says it’s time for us to show courage, to embody what he calls “the raw strange magic of ourselves,” and to stand with others in their vulnerability. 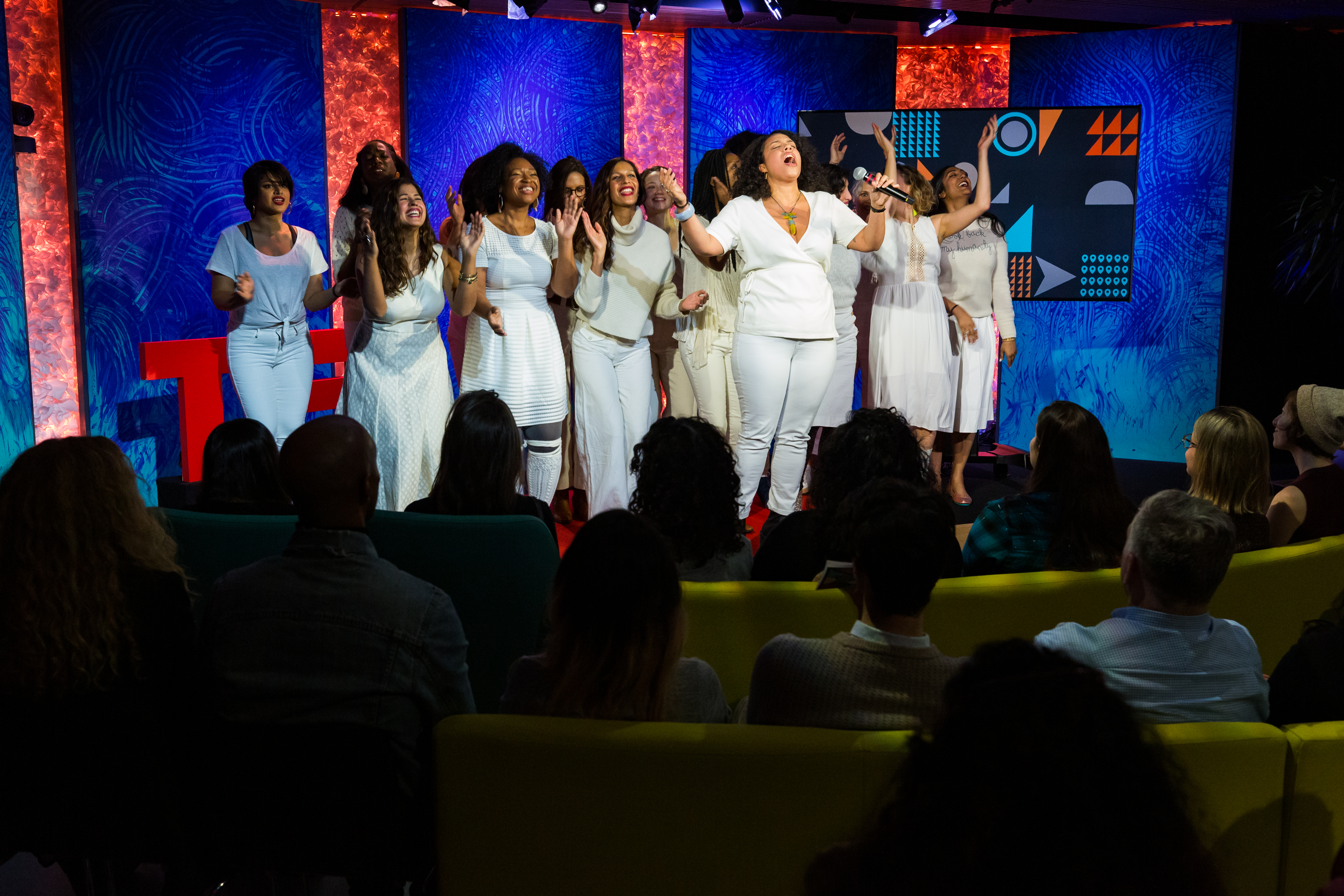 Let’s get the country singing! A collective of more than 60 women, the Resistance Revival Chorus gathers in sisterhood to sing and show how joy can be an act of resistance. To close out the night, the chorus fills the TED World Theater with the music of the labor movement, performing a rousing performance of “The Rich Man’s House.”