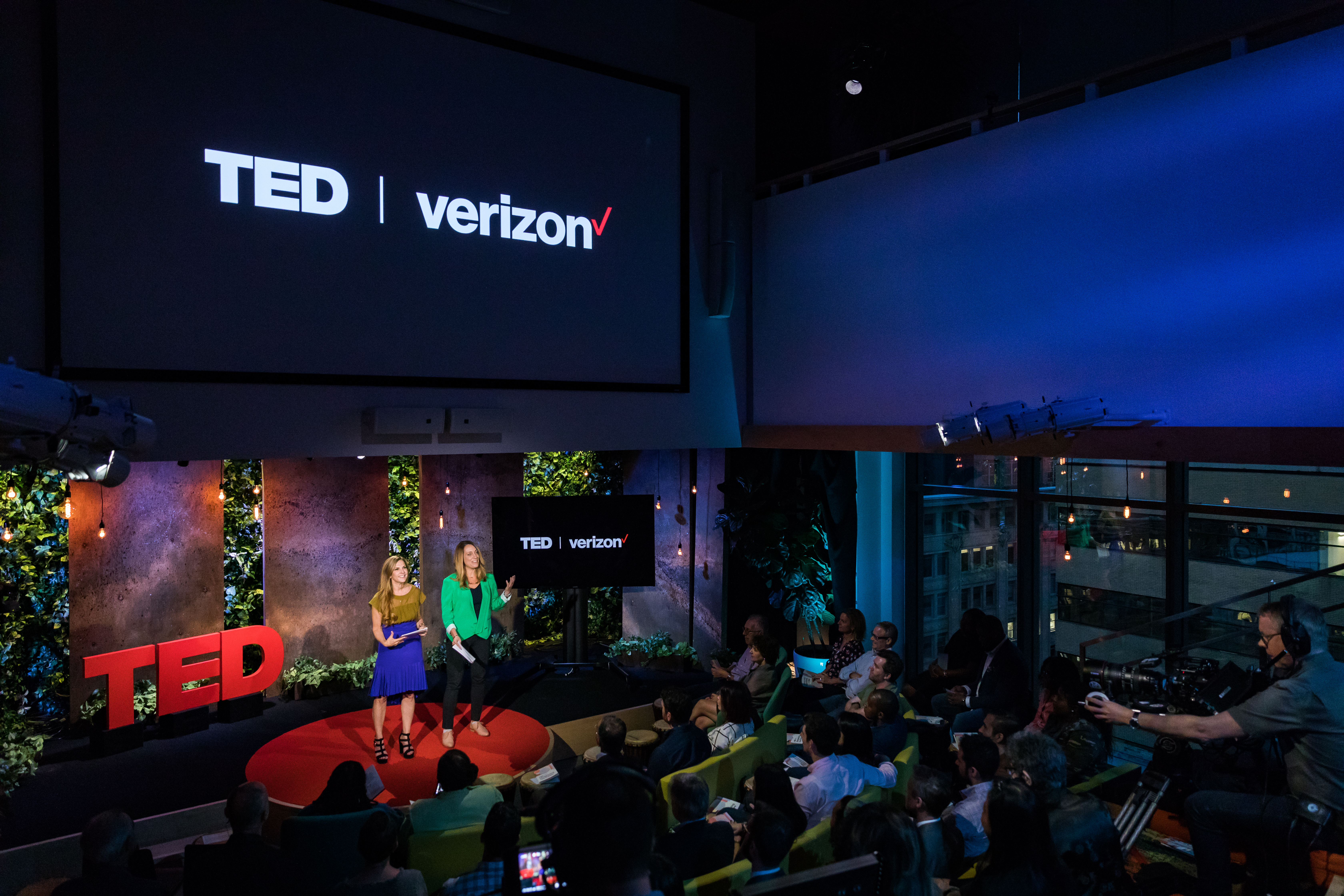 There are moments when the world begins to shift beneath our feet. Sometimes slowly, sometimes dramatically. Now more than ever we are living and working in an era of exponential technological advancement. How we address rapid change, what collaborative relationships we create, how we find our humanity — all this will determine the future we step into.

For the first time, TED has partnered with Verizon for a salon focused on building that future. In a night of talks at the TED World Theater in New York City — hosted by TED curators Bryn Freedman and Kelly Stoetzel — six speakers and one performer shared fresh thinking on healing our hospital system, empowering rural women, creating a safer internet, harnessing intergenerational wisdom and much more.

How intergenerational wisdom helps companies thrive. In 2013, Chip Conley, who built a multi-decade career running boutique hotels, was brought into Airbnb to be the mentor of CEO Brian Chesky. Conley was 52 (and thus 21 years older than Chesky) and he wondered what, if anything, he could offer these digital natives. But he realized he could become what he calls a “Modern Elder,” someone with the “ability to use timeless wisdom and apply it to modern-day problems.” For instance, he shares with the younger employees the people skills he gained over decades, while they teach him about technology. Nearly 40 percent of Americans have a boss who is younger than them — and when people of all ages exchange knowledge and learn from each other, good things happen. “This is the new sharing economy,” Conley says.

Can hospitals heal our environmental illness? “It’s not possible to have healthy people on a sick planet,” says healthcare change agent Gary Cohen. Working in healthcare for 30 years, Cohen has seen firsthand the pollution created by hospitals in the United States — if American hospitals were a country, he says, they would have more greenhouse gas emissions than the entire United Kingdom. Cohen suggests that it’s time for hospitals to go beyond medical practice and become centers of holistic community healing. What could that look like? Investment in sustainable, renewable energy and transportation, green and affordable housing, and partnership with schools to pool local food resources. “Transform hospitals from being cathedrals of chronic disease to beacons of community wellness,” Cohen says. 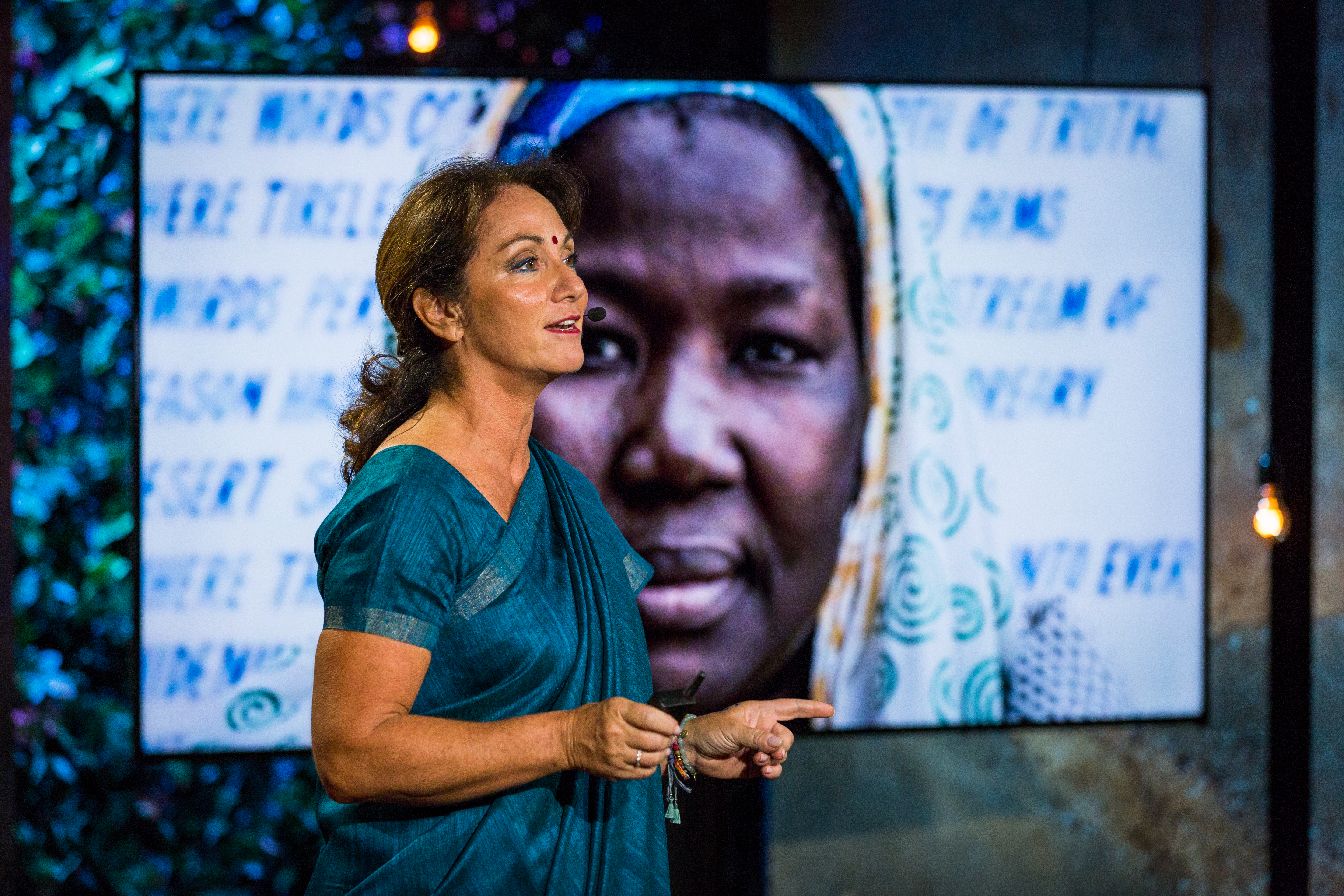 Meagan Fallone works on an education program that’s teaching thousands of rural, illiterate women to create solar power systems — and improve their communities and lives along the way. She speaks at the “Humanizing Our Future” salon. (Photo: Ryan Lash / TED)

Empowering rural women through solar-powered education. The innovators best prepared to cope with the issues of the future won’t be found in Silicon Valley or at an Ivy League school, says Barefoot College CEO Meagan Fallone. Instead, they’ll be found among the impoverished women of the Global South. Fallone works on groundbreaking programs at Barefoot College, a social work and research center, helping illiterate women break cycles of poverty through solar power education and training. Nearly 3,000 women have completed Barefoot College’s six-month business and solar engineering curriculum, and their skills have brought solar light to more than one million people. Following the success of the solar education program, and at the request of graduates, Barefoot College developed a follow-up program called “Enriche,” which offers a holistic understanding of enterprise skills, digital literacy, human rights and more. By democratizing and demystifying technology and education, Fallone says, we can empower illiterate women with the skills to become leaders and entrepreneurs — and make real change in their communities. 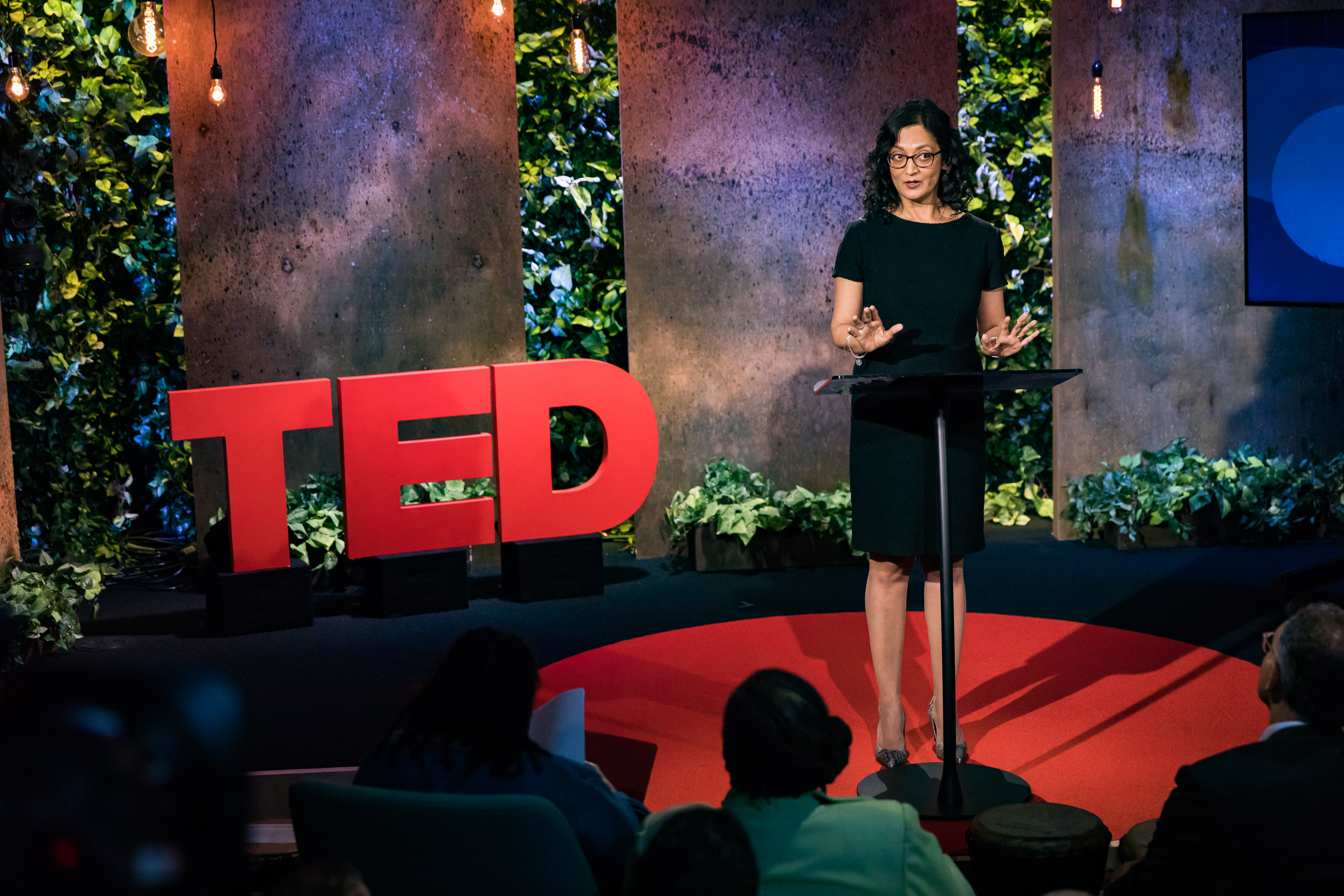 It’s fine to enjoy a dystopian movie, says Rima Qureshi — but when we’re building our real future, dystopia is a choice. She speaks at the “Humanizing Our Future” salon. {Photo: Ryan Lash / TED)

Dystopia is a choice. From The Matrix to Black Mirror, many of us crave science-fiction tales of rogue technologies: robots that will take our jobs, enslave us, destroy us or pit us against one another. Is our dread of dystopia a self-fulfilling prophecy? Rima Qureshi offers a warning — and some hopeful advice to remind us that dystopia is a choice. Our love for dystopia courts actual disaster through “target fixation”: the phenomenon where a driver or a pilot panics when a hazard looms, and thus becomes more likely to actually strike it. Although we should always keep cyber threats in our peripheral vision, Qureshi says, we should remain focused on the technologies that will help us: virtual classrooms, drones that race into burning buildings to find survivors, or VR that allows doctors to perform surgery remotely. We should not assume the future will be terrible (though we can still enjoy the next apocalyptic movie about how technology will destroy us all). 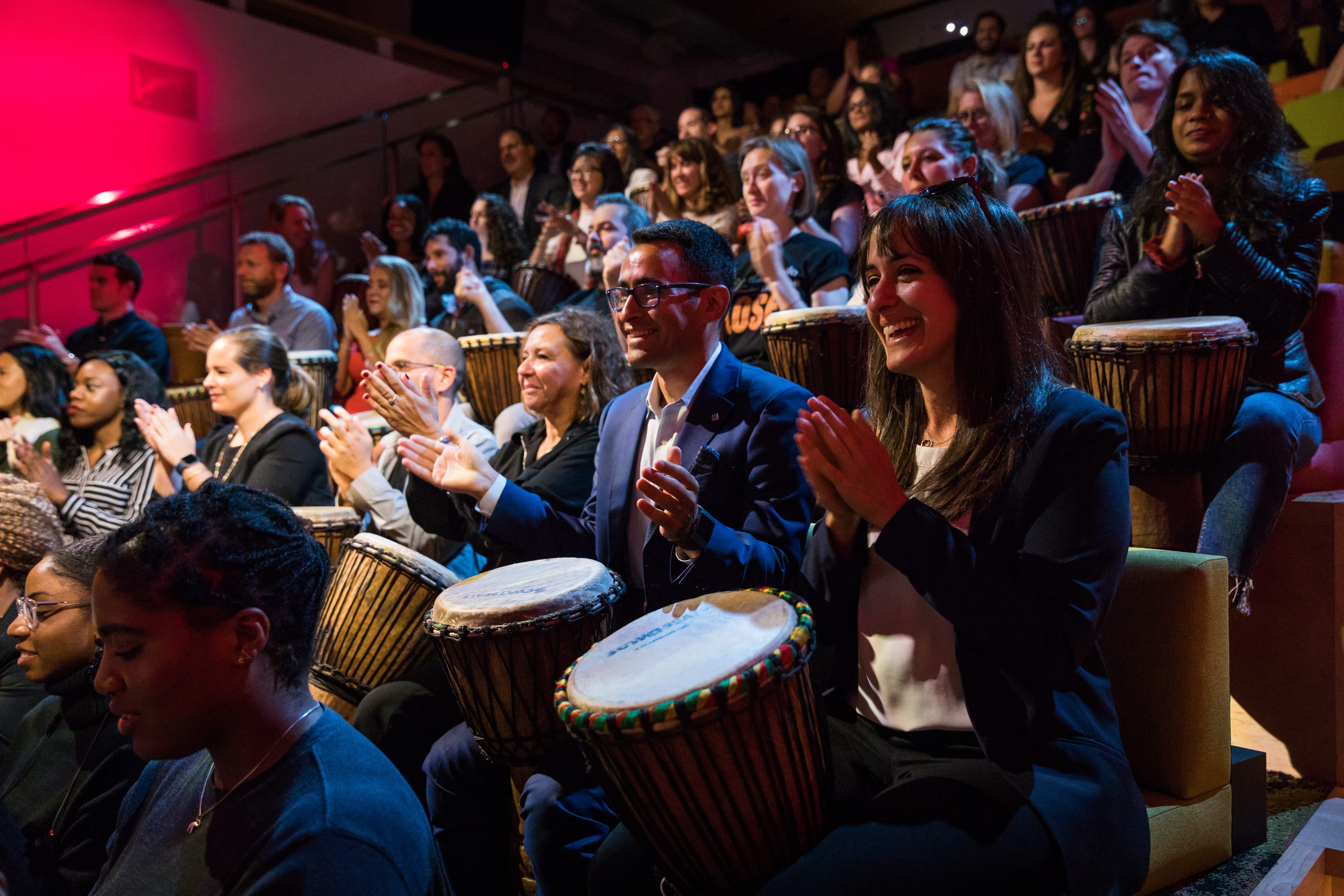 Ever played a djembe? The audience at the “Humanizing Our Future” salon got to try their skills on this traditional drum, led by motivator Doug Manuel, at the TED World Theater. (Photo: Ryan Lash / TED)

How drums build community. In 1995, entrepreneur Doug Manuel made a trip to West Africa and fell in love — with a drum. That drum is called the djembe, a rope-tuned instrument played with the hands; it’s one of the world’s oldest forms of communication. “With its more than 300 different traditional rhythms, it’s accompanied every aspect of life — from initiations to celebrations and even sowing the seeds for an abundant harvest,” Manuel says. Since his life-changing trip, Manuel has used the djembe to develop team-building programs and build bridges between Africa and the West. In a live demo of his work, Manuel invites the audience to try their hands at the djembe during two upbeat drum lessons. Backed by two professional drummers, Manuel teaches a few beats — and shows how the djembe can still bring people together around a collective rhythm.

Healing the pain of racial division. During the Civil Rights era, Ruby Sales joined a group of freedom fighters in Alabama, where she met Jonathan Daniels, a fellow student. The two became friends, and in 1965 they were jailed during a labor demonstration, ostensibly to save them from vigilantes. After six days in jail, the sheriff released the activists — but shortly after, they were attacked by a man with a shotgun. Daniels pulled Sales out of the way, and he was killed by the blast. In this moment, Sales witnessed “both love and hate coming from two very different white men that represented the best and the worst of white America.” Traumatized, she was stricken silent for six months. Fifty years later, our nation is still mired in what Sales calls a “culture of whiteness”: “a systemic and organized set of beliefs … [that] maintain a hierarchical power structure based on skin color.” To battle this culture, Sales calls for each of us to embrace our multi-ethnic identities and stories. Collectively shared, these stories can relieve racial tension and, with the help of connective technology, expand our vistas beyond our segregated daily lives. 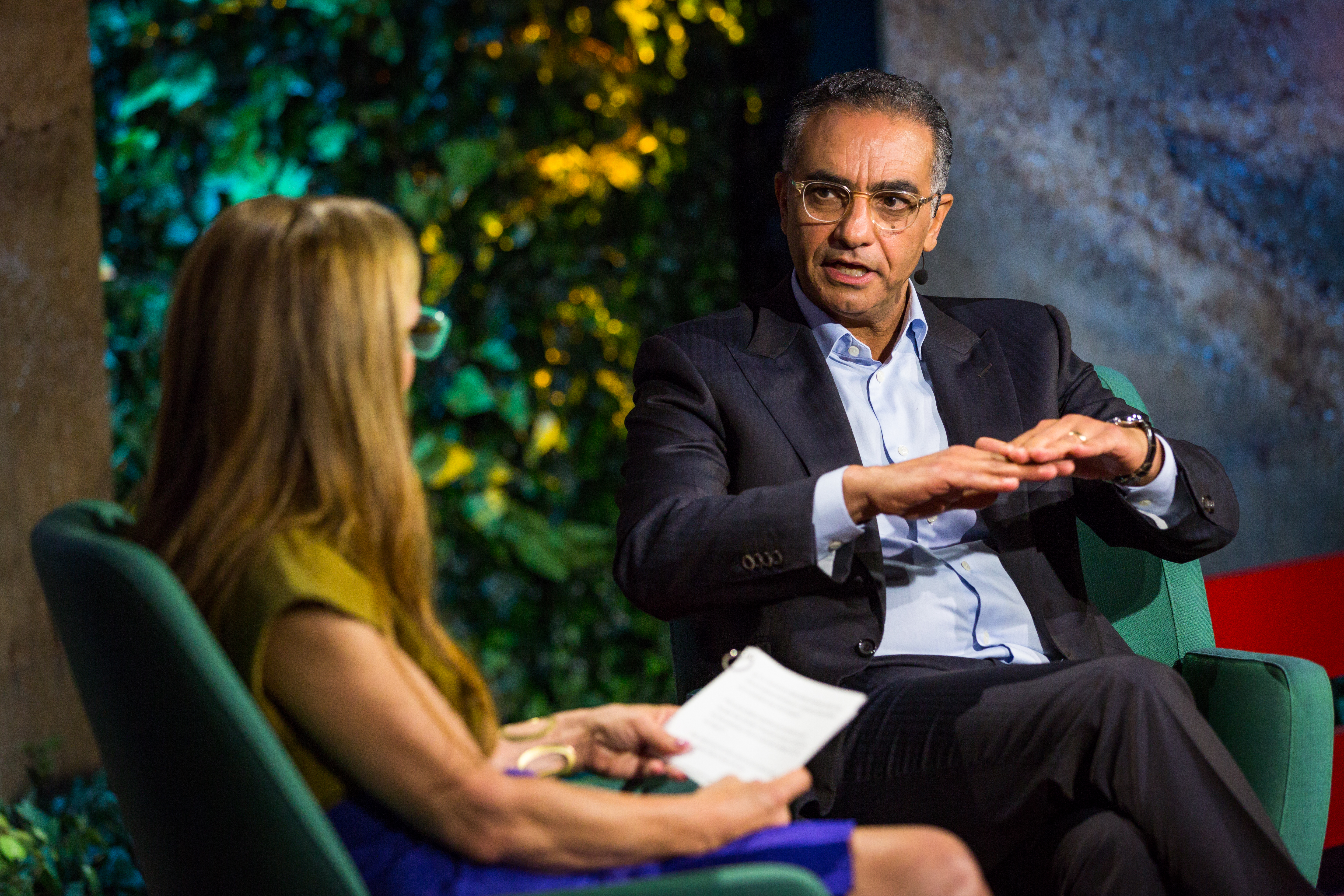 What the internet is missing right now. Technology architect Fadi Chehadé helped set up the infrastructure that makes the internet work — basic things like the domain name system and IP address standards. Today as an advisory board member with the World Economic Forum’s Center for the Fourth Industrial Revolution and a member of the UN Secretary-General’s High-Level Panel on Digital Cooperation, Chehadé is focused on finding ways for society to benefit from technology and on strengthening international cooperation in the digital space. In a crisp conversation with Bryn Freedman, curator of the TED Institute, Chehadé discusses the need for norms on issues like privacy and security, the ongoing war between the West and China over artificial intelligence, how tech companies can become stewards of the power they have to shape lives and economies, and what everyday citizens can do to claim power on the internet. “My biggest hope is that we will each become stewards of this new digital world,” Chehadé says.