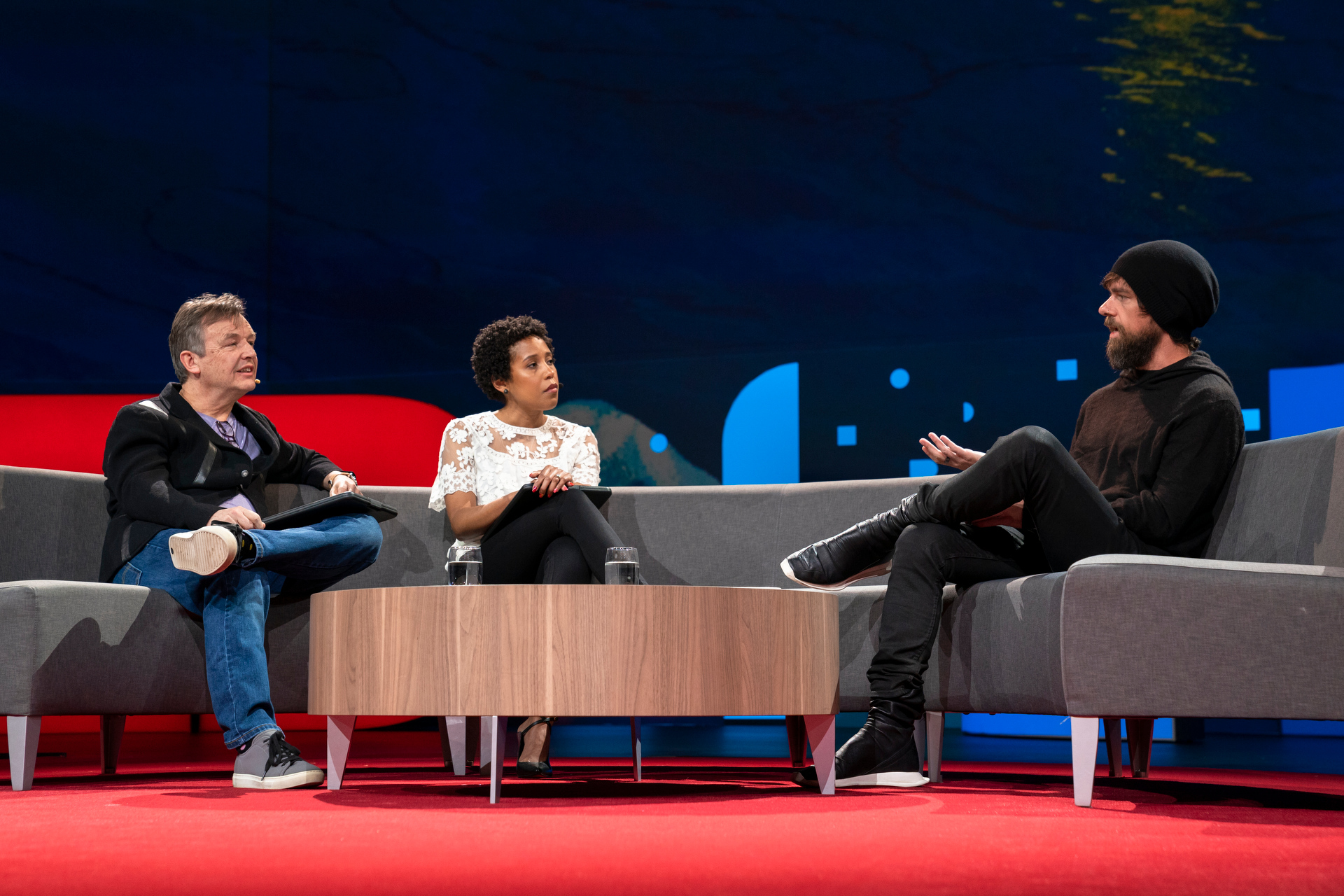 Head of TED Chris Anderson and TED current affairs curator Whitney Pennington Rodgers talk with Twitter’s CEO, Jack Dorsey, about the future of one of the world’s most important messaging platforms. They speak at TED2019: Bigger Than Us, April 16, 2019 in Vancouver, BC, Canada. (Photo: Bret Hartman / TED)

Here’s what happened on Tuesday of TED2019. A few news-making highlights first:

Jack Dorsey proposed a new way Twitter could work — by following topics and not individual people and brands. Hmm. Also, fun fact: If he had it to do over again, he would not have built the Like button. Watch for Jack Dorsey’s Q&A with Chris Anderson and Whitney Pennington Rodgers on TED.com today.

Digital Domain’s Doug Roble showed, for the first time outside his studio, a jaw-dropping digital animation tool mapped to a live human actor. This avatar-creating wonder tool could revolutionize filmmaking … and also your next video chat.

The Audacious Project unveiled eight ambitious projects to change the world — from a data-backed approach to fighting racist activity, to a sweeping global drive to breed plants that are better for the planet. Between them — and thanks to a good old-fashioned fund drive last night — they raised a collective $283 million, and each project now has enough seed funding to launch. But they’re only halfway to a collective goal of — wait for it — $567m.

And some larger themes emerged …

Changing, fast and slow: In Chris’s indelible image, Twitter is a ship, Jack Dorsey is the captain, and a few of the passengers have come up from steerage to ask if Dorsey might consider, perhaps, turning away from the path of the iceberg. As Chris says: “You’re showing this extraordinary calm, but we’re all standing outside saying, Jack, turn the f*cking wheel.” Jack’s response: “Quickness will not get this job done.” He’s looking for deeper, systemic change (including a few suggested moves that some Twitter users did not love). Rafael Casal had the same question — “How fast should change happen?” — after he touched off a Twitter firestorm around an issue of racial unfairness. He made one brief point on the platform; it gained traction over a weekend; and it got ugly real fast. Now, he asks: Is social media just too quick on the trigger to allow for nuanced discussion of social change? Working at another timescale altogether, Safeena Husain spoke about a deep investment in the far future — by educating young girls today, starting with the 1.4 million girls in India who never go to school. Investing now, today, in the potential of these girls could have a material effect on the UN’s Sustainable Development Goals, aimed at creating a better world by 2030. Why not start now?

Playing with personas: As Doug Roble demos his jaw-dropping tool to create detailed, real-time digital renderings of a person — in this case, Doug himself, plus an alternate personality named Elbor — a thought arises: Will this next-gen avatar lead to more deepfakes, more fraudulent online personalities? (The likely answer: Yes, but honestly, what won’t?) Meanwhile, from the Marine Biological Laboratory, Woods Hole, Roger Hanlon told us about shape-shifting cephalopods who change their skin color and texture in a blink, to hide, to mate, to blow human minds. Hanlon suggests their smart skin, and their ability to deploy it in sophisticated ways and in a flash, is an alternative form of intelligence, driven by their strange and wonderful and very, very large brains.

Service and meaning: Matt Cutts worked at Google for almost 17 years, and he took what he thought would be a six-month break to join the US government’s digital service. Three-plus years later, he’s still in government, finding deep meaning and satisfaction in solving problems that affect real people’s lives. At TED Unplugged, he makes the case to his fellow technologists that if you want to really make an impact, you should leave Silicon Valley, wave goodbye to those crazy perks and free meals, and enter a world where office furniture isn’t a given — but the impact is. Julius Maada Bio, the president of Sierra Leone, offered his own take on the meaning of service. He first took power in a military coup, but his goal, he says, was always to return the country to democratic rule. His other major goal: “Sierra Leone must be a secure, peaceful and just society where every person can thrive and contribute.” Over the past decades, he’s moved steadily toward that objective. Plant biologist Joanne Chory is committed to an equally large and far-seeing goal: developing plants that capture carbon better and for longer than common crops do now which will help mitigate our planet’s creeping carbon levels. Her vision, her sense of mission and her nothing-can-stop-me persistence are genuinely inspiring.

Curiosity makes us human: Educator Brittany Packnett meditates on confidence, the hidden skill that powers many of our other skills. Confidence is what helps you put plans into action, and what helps you keep moving even after you fail. What builds confidence? One key factor, she says, is curiosity, the desire to push beyond who you are and what you know. Mentalist Derren Brown taps into the curiosity of the audience by guessing our innermost questions (and even one guy’s password). How did he do it? He’ll never tell. Appearing via robot, David Deutsch meditates on another force that moves us: the drive for new “explanatory knowledge.” As humans, we desire to understand things and explain them and change them and make them new. As he says: “From the human perspective, the only alternative to that living hell of static societies is continual creation of new ideas, behaviors, new kinds of objects.”