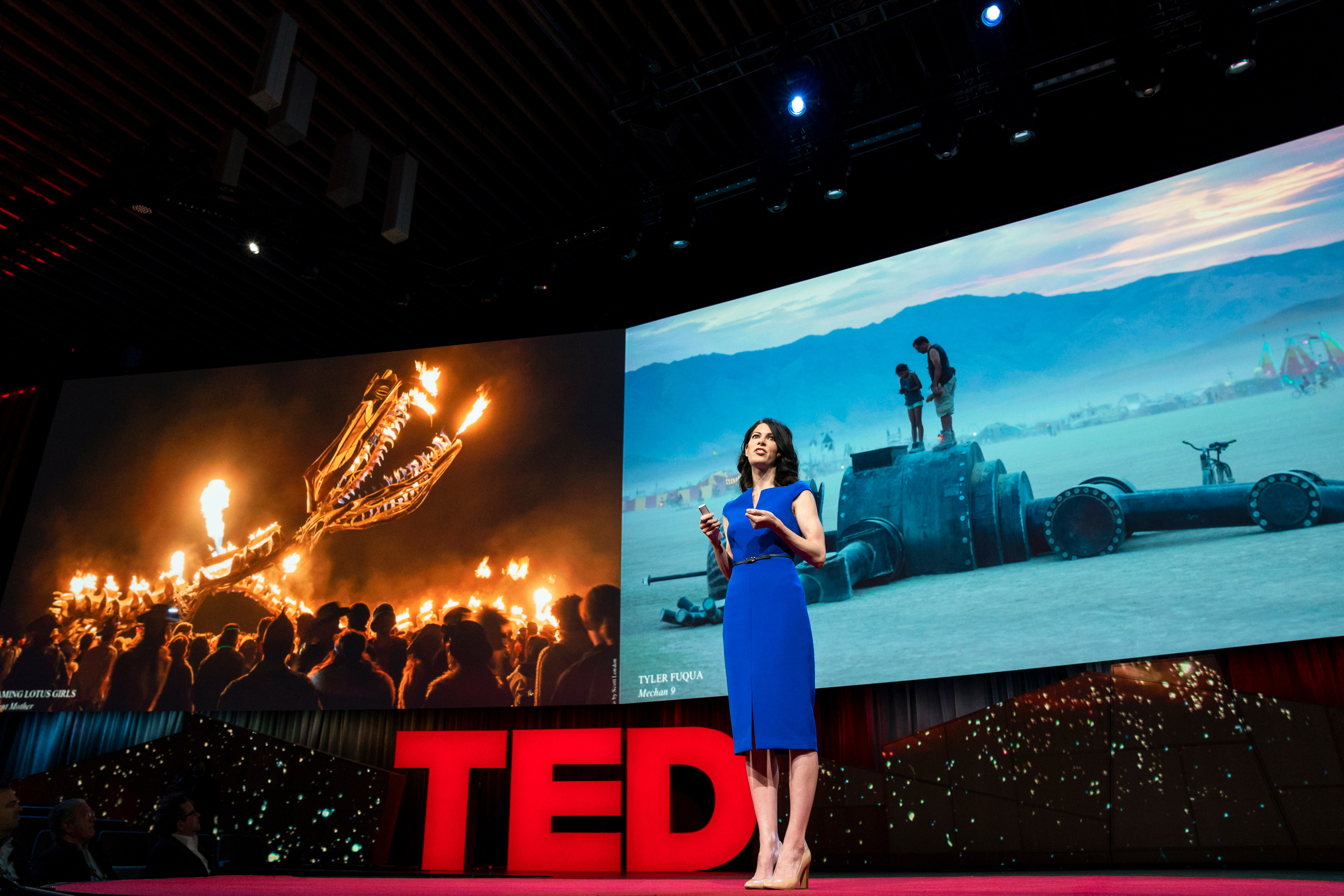 With two pieces created for the annual Burning Man festival as a backdrop, curator Nora Atkinson explains the unique artistic experience — and it’s not just the heat and grit — that can be found in the desert there, at TED2018: The Age of Amazement, April 12, 2018, Vancouver. Photo: Bret Hartman / TED

Session 5, hosted by TED Curator Chris Anderson and astrophysicist and TED Fellow Jedidah Isler, is called “space to dream.” As Isler points out, we’re not just talking about outer space — it’s also about “the right to take up space, to dream, to do.” Seven dreamers, doers and designers offer a variety of ways to look at this theme.

Learning from the art of Burning Man. To the uninitiated and skeptical, Burning Man may seem like an indulgent and dusty bacchanalian bash in the Nevada desert meant for those who can afford the time and expense to go. But to Nora Atkinson, craft curator at the Smithsonian American Art Museum, it’s a joyous, priceless exercise in ephemeral art for all participants, regardless of ability or experience. More than 70,000 people trek there each August to engage with 300+ installations, sculptures and structures. They must be constructed on the spot, and they’re destroyed or carted away and stored at week’s end. Atkinson was a first-time Burner in 2017 and discovered there what’s so often missing from museums, where visitors dutifully pass from label to label: curiosity and engagement. At Burning Man, there are no placards explaining the pieces, no guards telling you not to touch, and nothing is sold there. Instead, “art becomes a place for extended interaction,” says Atkinson. It’s “authentic and optimistic in a way we rarely see anywhere else.” Freed from worrying about critics and collectors, artists make work for themselves and their fellow Burners — art that can be as big and dangerous like Rebekah Waites’ “Church Trap,” a rustic chapel set precariously on a wooden beam that was built and burned in 2013. “The art is not always refined. It isn’t always viable. It’s not always even good,” but it is art that encourages, even demands, interaction and investigation. “What is art for,” Atkinson asks, “if not this?”

Why we need to design cities of difference. Shanghai, Paris, Tokyo, Venice, Morocco: these cities are iconic destinations, thanks to their distinctive architecture and charms. But sadly, most cities are not like them. There’s a creeping sameness in many urban buildings and streetscapes, no matter where in the world they are, says architect and Columbia University professor Vishaan Chakrabarti. The physical homogeneity — stemming from regulations, automobiles, accessibility and safety issues, and cost considerations, among other factors — has resulted in a social and mental one as well. Let’s strive to create cities of difference, magnetic places that embody an area’s cultural and local proclivities, exhorts Chakrabarti. Doing so will be more than a design challenge, of course. It will involve creating new products — a hovercraft wheelchair? cobblestones that generate energy when stepped on? — and processes to ensure that they’re sustainable and accessible to all. “When we invented the automobile, what happened was the world all bent toward the invention and we recreated our landscape around it,” he says. “In the 21st century, technology can be part of the solution if it bends toward the needs of the world.”

Bridges are useful — let’s make them beautiful, too. “The world needs bridges,” proclaims Ian Firth, an engineer who has designed spans all over the world, and his work includes the 3.3 kilometer-long suspension bridge over the Messina Strait in Italy. While these structures are essential for human growth and development, they symbolize so much more than that, too. “They shout about connectivity, community; they reveal something about creativity, ingenuity; they even hint at our identity,” he explains. Although bridges fall into only a few types, depending on the nature of their structural support, the potential for innovation and variety is huge. Yet change happens slowly in bridge design, according to Firth, primarily because of the high levels of risk should a span fail. He points to the Tacoma Bridge collapse in 1940, which put off designers for decades from constructing suspension bridges. Creativity can be found in new spans being erected, and Firth takes the audience on a mesmerizing tour of the cutting-edge in bridge technology, including a bridge that floats across a fjord in Norway. “I passionately believe bridges need to be elegant, they need to be beautiful,” Firth says, “Beauty enriches life, doesn’t it? It enhances our wellbeing. Ugliness and mediocrity does the exact opposite.”

Telling stories through video games. Avid readers tend to regard video games with disdain (guilty!), but we should instead think of video games as fiction in 3D. So believes game designer David Cage, who thinks of himself as a storyteller working with a different set of tools. “I’ve always been fascinated with the idea of recreating the notion of choice in fiction,” he says. “My dream is to put the audience in the shoes of the protagonist, let them make their own decisions, and by doing so, let them tell their own stories.” A novel is typically a linear experience devoid of choices — the reader follows the path set by the writer. Video games are interactive stories that give the reader autonomy and a plot that changes from moment to moment. Cage then presents a live video game demo, letting audience members control a character: an android trying to save a little girl taken hostage. (Thankfully for the audience’s blood pressure, the girl is freed.) “Interactive storytelling is a revolution in the way we tell stories. With the emergence of new platforms like interactive television, virtual reality and video games, it will become a new form of entertainment, and maybe even a new form of art.” Cage concludes. “This is a medium waiting for its Orson Welles or Stanley Kubrick.” Or, its Toni Morrison or Kazuo Ishiguro. In a short Q & A, TED curator Chris Anderson asks Cage about the hidden risks associated with video game violence. The game designer says that when violence is used appropriately in the context of a narrative or as storytelling device, it can enhance the story. That said, he believes we — designers and the game-playing public — need to be careful and take responsibility.

An intriguing visitor from another solar system. In October 2017, University of Hawaii astrobiologist Karen Meech got the call that she says every astronomer waits for: she learned an interstellar comet had been detected by the PanSTARRS telescope in Haleakalā,, Maui. Now thousands of asteroids cruise through our solar system every year, but the celestial body that was eventually named `Oumuamua — Hawaiian name for scout or messenger from the distant past reaching out to us — was, as Meech puts it, ”a package from the nearest star system 4.4 light years away,” having traveled on a journey of more than 50,000 years. What exactly is the oval, half-mile-long `Oumuamua? Meech believes it could be a chunk of rocky debris from a new star system; other researchers believe it may be something else all together — evidence of extraterrestrial civilizations, or material cast off in the death throes of a star. She and her colleagues were able to study ‘Oumuamua for only a few days before it traveled out of range. “This unexpected gift has generated more questions than answers,” says Meech, “but we were the first to say hello to this visitor from our distant past.

Alone in the cosmos. The universe is 13.8 billion years old and contains billions of galaxies — in fact, there are probably a trillion planets in our galaxy alone. People have long thought a civilization like ours must exist or should have existed somewhere out there, but British astronomer Stephen Webb brings up another possibility: we’re alone. Thinkers have speculated about all the barriers that a planet would need to surmount to house an alien civilization: it would need to be habitable; life would have to develop there; such life forms would need a certain technological intelligence to reach out; and they’d have to be able to communicate across space. Rather than viewing the situation with sorrow and the cosmos as a lonely place, “the silence of the universe is shouting: we’re the creatures who got lucky,” says Webb. “If we learn to appreciate how special our planet is; how important it is to look after our home and find others; how incredibly fortunate we all are simply to be aware of the universe — well, humanity might survive for a while. And all those amazing things we dream aliens might have done in the past – that could be our future.”

Our world is filled with problems, so which ones should we tackle? For the last ten years, moral philosopher Will MacAskill and others have developed a philosophy and research project called “effective altruism,” seeking to use evidence and reasoning to try to answer the question previously posed. They’ve developed a simple framework: the problems we tackle should be big, solvable and neglected. Using those criteria, MacAskill thinks our time and efforts might best be spent now in focusing on addressing the situations or events that could derail civilization or lead to the extinction of the human race, such as nuclear war or a global pandemic. We can all work on this problem, says MacAskill. “You can contribute with money, political engagement, or through your career.” With your money, you can support organizations that directly work on these risks, like the Nuclear Threat Initiative. You can vote in favor of candidates who take these risks seriously and who support greater international cooperation. And you can work at an organization that is working on these issues. “If we think carefully, and focus on problems that are big, solvable and neglected, we can make a truly tremendous difference to the world for thousands of years to come,” concludes MacAskill.