TEDxChange, themed “Positive Disruption,” kicks off shortly — at 9am (PDT) at the Gates Foundation campus in Seattle, Washington — and anyone, anywhere is invited to watch along through the livestream at TED.com or via TEDxChange.org. Yesterday, we gave you three reasons to tune in and shared with you the amazing speakers who’ll take the […]

TEDxChange, happening this Wednesday, April 3, is a global conversation on some of the most pressing and intractable health and equity issues in our world today — like access to clean water, to schools, to medicine, to technology and to information. Overall, the event will deliver inspiration to those who have the courage to believe […]

The courage to believe change is possible: A Q&A with Melinda Gates

Can a person change a world rife with problems — villages without basic healthcare, girls turned away from schools, hospitals unable to get life-saving vaccines to the people who need them? For three years, TEDxChange, a partnership between the Bill & Melinda Gates Foundation and the TEDx program, has said yes, by spotlighting people who […] 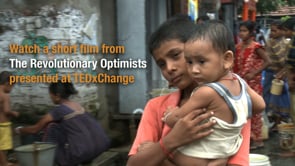 Just projected at TEDxChange — this wonderful preview: Children are saving lives in the slums of Kolkata. Filmed over the course of several years, “The Revolutionary Optimists” follows Amlan Ganguly and three of the children he works with on an intimate journey through adolescence, as they fight for the better future he encourages them to […]

TEDxChange, happening now, is being livestreamed all over the world on TED.com and TEDxChange.org (which links to Facebook). The livestream airs at 5:30pm CEST (Berlin time), which translates to 12:30am Tokyo time, 9pm Mumbai time, 3:30pm in Dakar, 12:30pm in Brasilia, 11:30am Eastern and 8:30am Pacific time. Speakers include Melinda Gates, Jeff Chapin, Sven Giegold, […]

TEDxChange, happening on April 5, is being livestreamed all over the world on TED.com and TEDxChange.org (which links to Facebook). April 5 is a Thursday, which means that you’re probably at work or school with a bunch of meetings to attend. Lucky for you, the program is only 90 minutes, and it’s worth it — […]

4 reasons to attend a TEDxChange event near you

TEDxChange Brisbane: September 21, 2010, Brisbane Powerhouse. Photo: TEDxBrisbane / Mark Lobo TEDxChange, convened by Melinda Gates and hosted by Chris Anderson, will focus on “Big Picture” thinking around our most complex problems — and their solutions. Around the world, nearly 200 events from 66 countries will watch the livestream together. We asked some of […]

[youtube http://youtu.be/MYzO8CS3IAw%5D What is your role in solving the world’s biggest problems? Climate change, global poverty, the AIDS/HIV crisis — solving these problems will demand big thinking and unprecedented international cooperation. That’s where TEDxChange comes in. TEDxChange 2012 is a platform for sharing game-changing ideas — and the world is invited to join the conversation. […]

Nominate your “global good” hero to speak at TEDxChange

Do you know of a hero for the “global good”? Someone who inspires with their work to reduce poverty and improve health around the world? Someone who has ushered in significant change in their community through commitment and creativity? Then nominate this hero to take the stage alongside Melinda Gates at TEDxChange, happening this coming […]

[vimeo http://vimeo.com/20156515 w=525&h=294] In this reel, TED recaps an amazing year of talks from three conferences, a bunch of smaller TED events — and a powerful year of TEDx. Dive in, and then follow up with talks that intrigue you … You’ll see, in order of appearance: The LXD, Chris Anderson and Julian Assange, Bill […]

Melinda Gates blogs about a new and interesting collaboration: After TEDxChange last fall in New York, we were interested in finding ways that we could keep the global conversation around health and development going. That’s why I’m excited to share our latest plans. Next week, we’ll be partnering with TEDxKibera in our first salon: TEDxChange […]

3 lessons for nonprofits (from Coke): Melinda French Gates on TED.com

At TEDxChange, Melinda French Gates makes a provocative case for nonprofits taking a cue from big corporations such as Coca-Cola, whose plugged-in, global network of marketers and distributors ensures that every remote village wants — and can get — a Coke. Why shouldn’t this work for condoms, sanitation, vaccinations too? (Recorded at TEDxChange, September 2010 […]

The good news of the decade?: Hans Rosling on TED.com

Hans Rosling reframes 10 years of UN data with his spectacular visuals, lighting up an astonishing — mostly unreported — piece of front-page-worthy good news. Along the way, he debunks one flawed approach to stats that blots out such vital stories. (Recorded at TEDxChange, September 2010 in New York, New York. Duration: 25:35) [ted id=974] […]

Lyrics for “Change the World”: TEDxChange

Voices of TEDxChange: Around the world and on the blogs

Lauren at the TEDx blog has a great roundup of TEDxChange events around the world — including photos from global events and a fabulous video from TEDxSoweto. You can watch TEDxChange live >> And follow the coverage from Blogger’s Alley, here in New York City: Liveblogging / tweeting: The ONE Campaign blog @onecampaign Facebook.com/one Andrea […]

Tackling the MDGs: A playlist for TEDxChange

This Monday, Sept. 20, TED and the Bill & Melinda Gates Foundation bring us TEDxChange: a chance to evaluate the UN Millennium Development Goals, the progress that has been made, and the long, yet optimistic road ahead. The Millennium Development Goals include: Eradicating poverty and hunger Achieving universal primary education Promoting gender equality and empowering […]