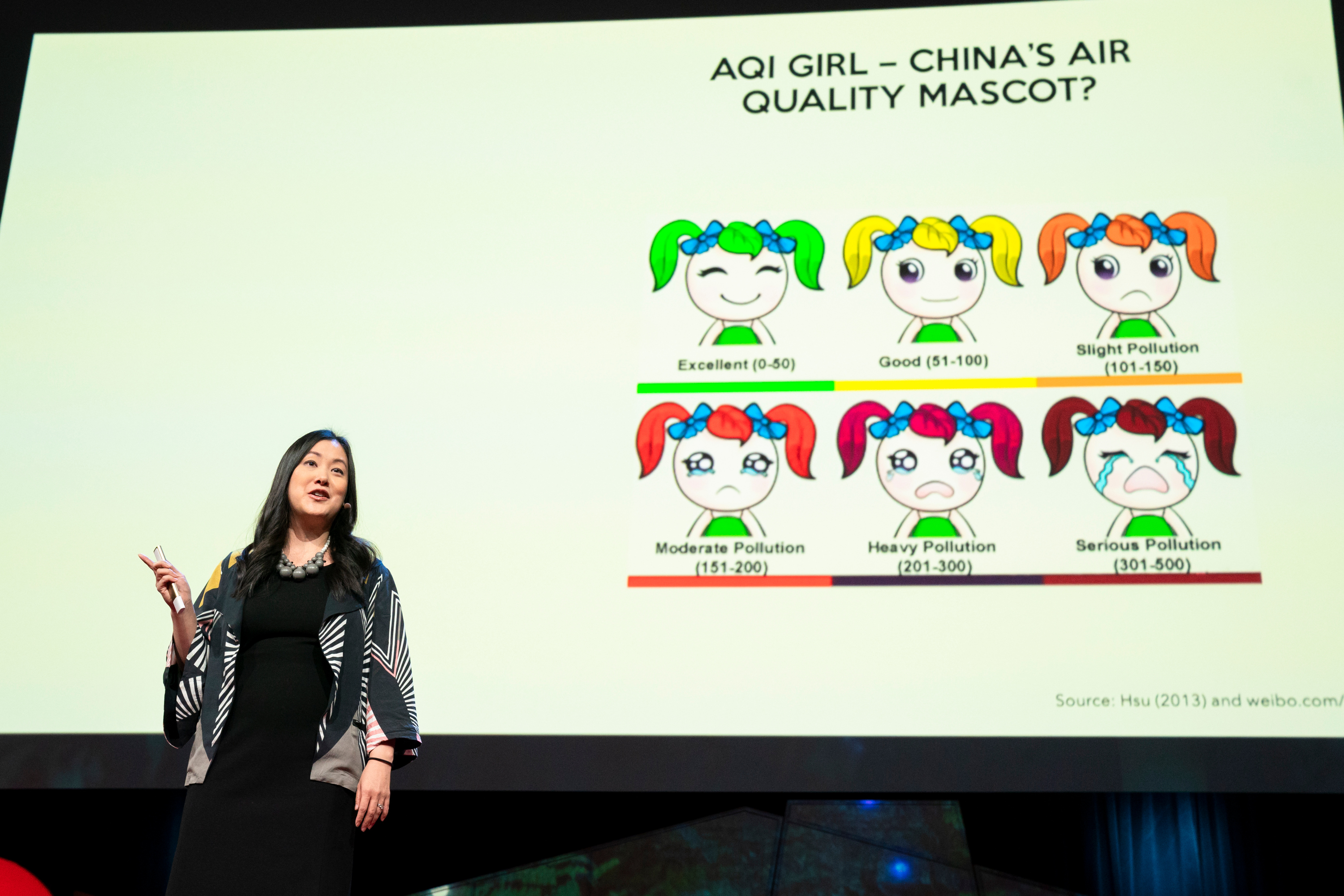 When Chinese citizens got angry about air quality, they also got creative; here’s an air quality rating system with personality. Angel Hsu tracks environmental data related to China, and studies how the world’s most populous nation is setting the pace for global responses to pollution. She speaks at TED2018 on April 12, 2018, in Vancouver. Photo: Bret Hartman / TED

The next renewable resource: the cold of space. Today, 17 percent of electricity used worldwide is for cooling systems — which also includes refrigeration — and the systems produce 8 percent of global greenhouse gas emissions. “What keeps me up at night is that the energy use for cooling is expected to grow six-fold by the year 2050,” says University of Pennsylvania physicist and applied engineer Aaswath Raman. And he adds, “The warmer the world gets, the more we are going to need cooling systems. This then has the potential to cause a feedback loop, where cooling stands to become one of the biggest single sources of greenhouse gas emissions this century.” Raman is exploring a potential solution that leverages a cool fact about infrared light and deep space. Read more about this big-picture idea »

The intricacies of removing CO2 from the atmosphere. The concentration of CO2 in today’s atmosphere is a staggering 400ppm, but we’re still not cutting emissions as fast as we need to. According to chemical engineer Jennifer Wilcox, this means we’ll need to actually pull CO2 back out of the atmosphere – a strategy known as negative emissions. The technology to do this already exists. Basically, a device known as an air contactor uses CO2-grabbing chemicals in solid materials or dissolved in water to pull the gas out of the air, sort of like a synthetic forest. What makes this process tricky, though, is that it’s energy-intensive, which drives up costs or, depending on the type of energy used, ends up emitting more CO2 than is captured. Several companies are working on making the process more cost-effective using a variety of techniques, as well as solving other problems of carbon capture like how and where we should build these “synthetic forests.” However, no matter how many technological advances we make, negative emissions are not enough on their own to solve our climate crisis, Wilcox cautions. “We should not see negative emissions as a replacement for stopping pollution but rather as an addition to an existing portfolio that includes everything,” she says. In a short Q&A with Chris Anderson, Wilcox predicts that we may see this technology roll out around the world in the next five to ten years.

Make pollution into a cute mascot? Iconic images of skylines buried in clouds of smog ensured China’s notoriety as one of the world’s biggest polluters. Yet Angel Hsu shows us that real change is afoot in the world’s biggest nation. China’s energy initiatives have unexpectedly placed it at the vanguard of the fight against pollution and climate change. As Hsu notes, “China is very much in the driver’s seat determining our global environmental future.” China truly has “a chance at global leadership on issues where nations need to rapidly shift course.” What caused this change? In 2011, when Hsu began conducting her research, China’s own environmental data — specifically for fine particulate matter, or PM2.5 — was kept secret. But thanks to citizen activism, pollution’s hazardous impacts on human health skyrocketed into China’s consciousness, as evidenced by everything from a music festival named “PM2.5” to a golf course that proclaimed “Golf sub-par, but don’t breathe sub-par air.” The emerging zeitgeist grabbed the government’s attention. Recognizing China’s toxic reliance on fossil fuels, they pulled the plug on over 300,000 coal plants, and began feverishly developing alternative energy (their wind and solar production alone could soon rival Germany’s total electricity consumption). Although China must still address its coal problem abroad, its efforts at home (although uncertain) could impact global pollution — and China’s massive carbon footprint — in a major way. 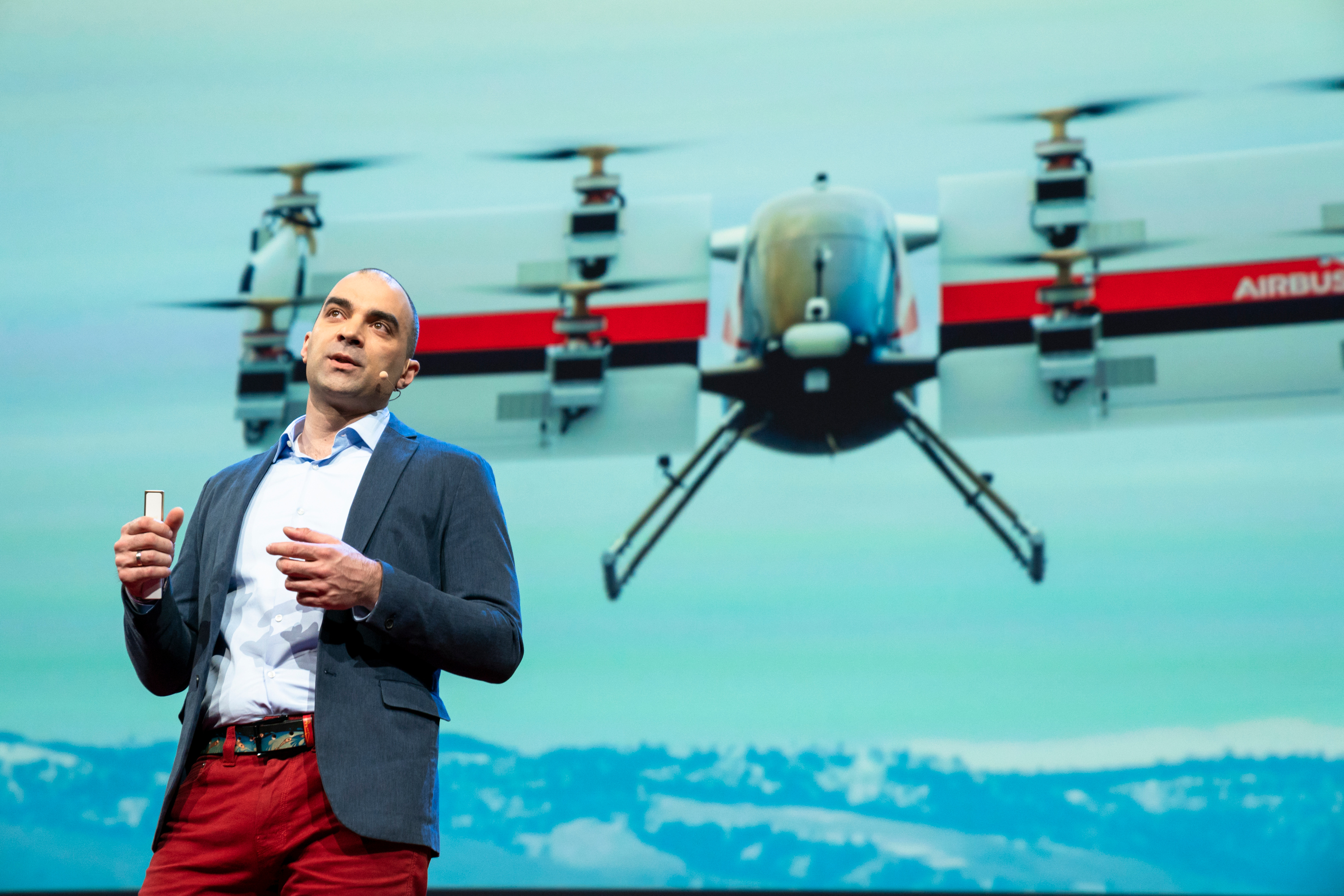 Rodin Lyasoff imagines a new era of flying things — small, safe aircraft that will help us transcend brutal traffic jams on our streets. Will there be traffic jams in airspace? Well, “The sky is underutilized,” he says. Photo: Bret Hartman / TED

The next golden age of aviation. The agony of bumper-to-bumper traffic is something that we have all experienced. Roads are congested, with few ways to expand them, and few solutions available to get around that congestion. Rodin Lyasoff, CEO of A³ in Silicon Valley, wants flight to change this. “The sky is underutilized,” he says, and will arguably never be congested like the ground is, thanks to air traffic management and safety requirements. Flight is a fast and convenient alternative to ground transportation, one that Lyasoff wants to make accessible and affordable to all. Imagine, instead of hopping in your car, you take a taxi or a ride-sharing service to a take-off spot — known as a vertiport — where an aircraft is waiting to fly you over the traffic to the vertiport on the other side. This future is not as far off as it may seem. At A³ they’ve built and flown an electric and autonomous prototype, called Vahana. Vahana is fully electric, self-piloted and takes off and lands vertically. For a single passenger traveling 20 miles, it would take 15 minutes and cost only about $40. Where helicopters are loud, expensive and hard to pilot, Vahana is quiet, efficient and intelligent. Companies around the world are building similar aircraft, and Lyasoff predicts that within the next decade vertiports will be a familiar sight around cities and towns. “In the past century, flight connected our planet,” he says, and hopes that with aircrafts like Vahana, in the next century flight “will connect our local communities and reconnect us to each other.” In a short post-talk Q&A, Lyasoff emphasizes the importance of making personal flight accessible through affordability. “One of the things we’re really focusing on is the cost. Some of the features are driven by price … which should make it accessible to a larger crowd,” he says. 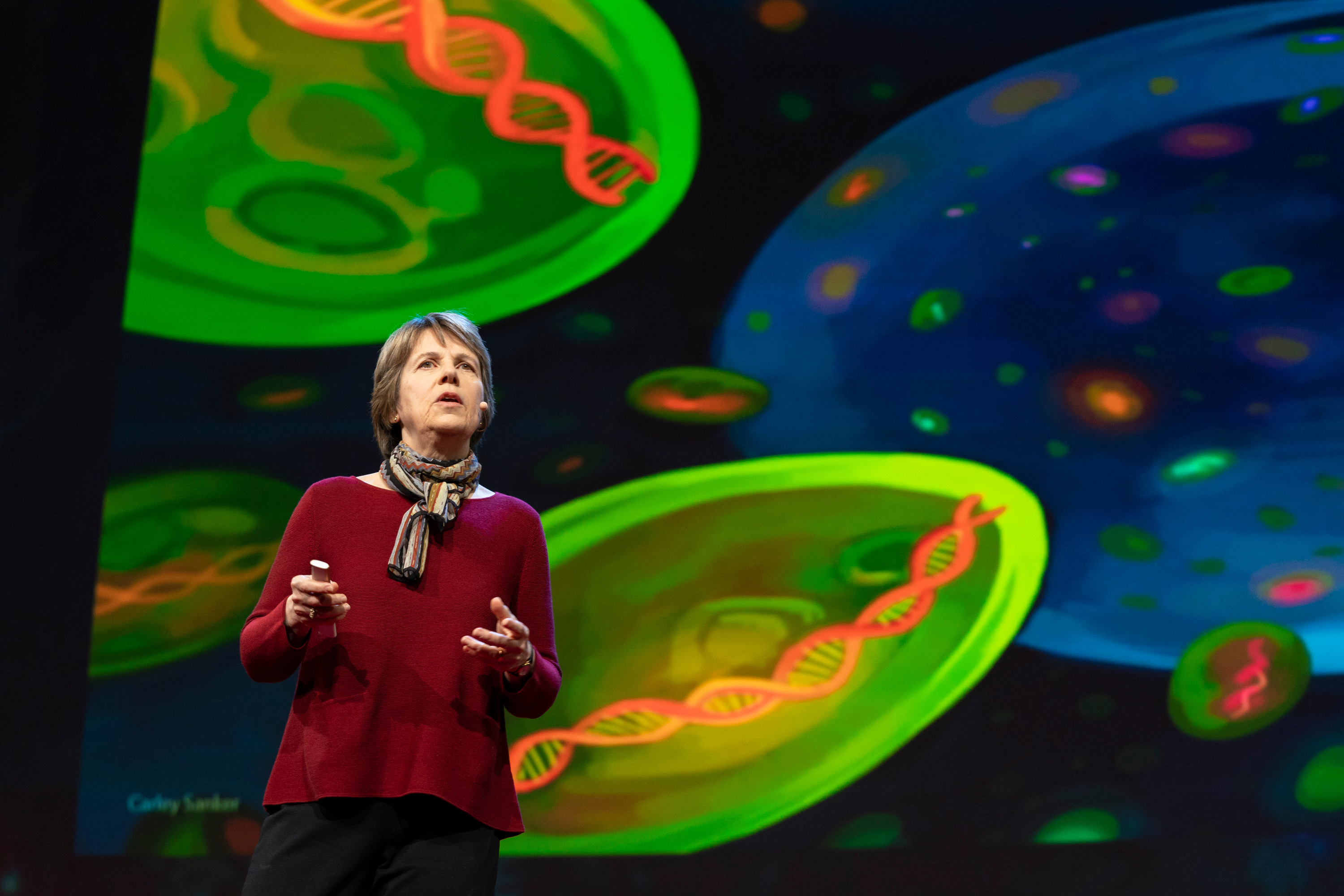 Meet one of the most important microbes on Earth. Prochlorococcus is an ancient ocean-dwelling cyanobacterium that Penny Chisolm, a biological oceanographer at MIT, believes holds clues for sustainable energy in its genetic architecture. Prochlorococcus, which Chisolm discovered in the mid-1980s, is the most abundant photosynthetic cell on the planet, with a gene pool 4 times the size of the human genome, yet it’s only 1/100th the width of a human hair. Chisholm views it as an engineering masterpiece and believes: “if we could mimic its elegantly simple design, if we could truly understand how it works, it might inspire sustainable energy solutions to break our dependency on fossil fuel.” 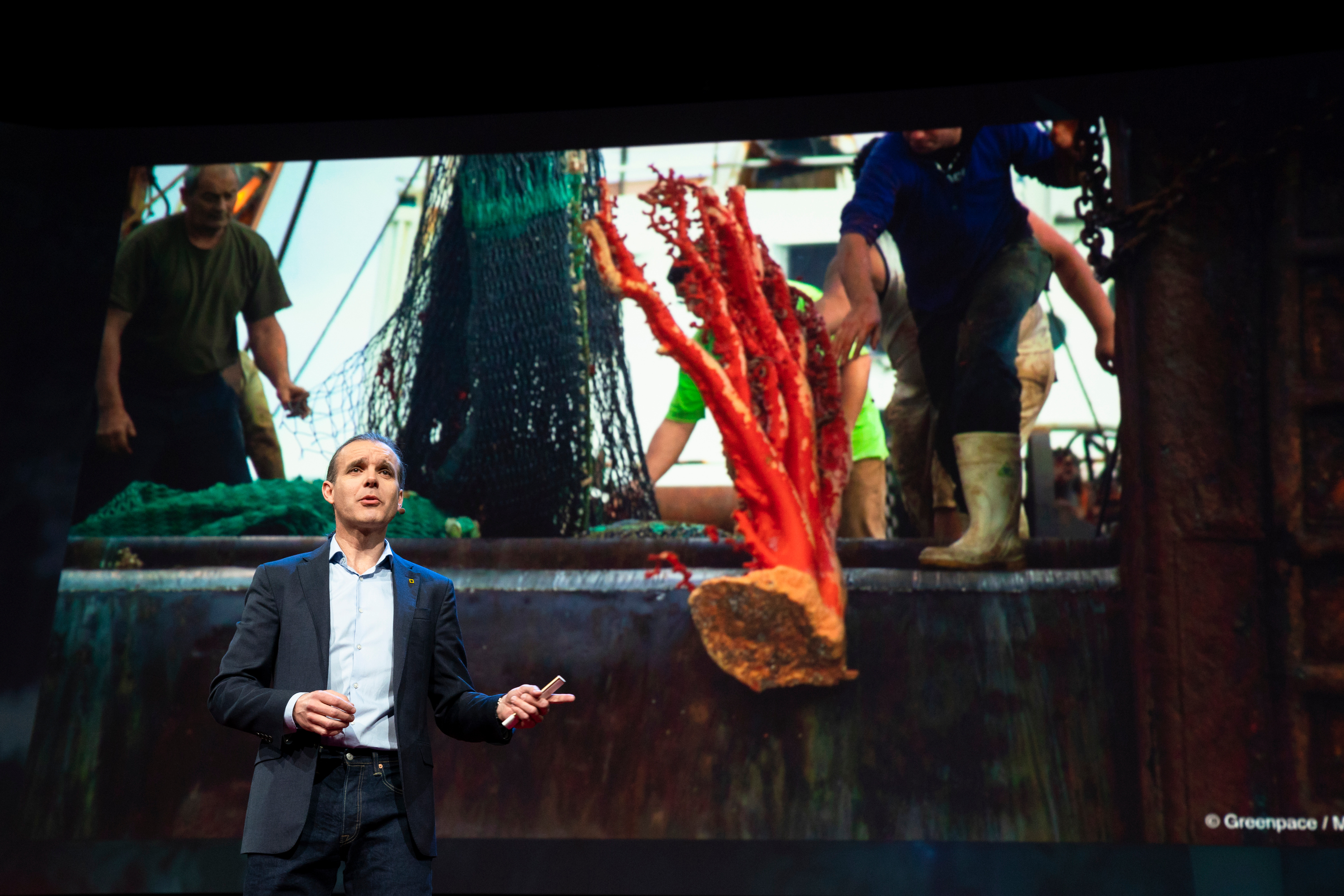 Factory fishing is strip-mining our oceans, and as Enric Sala shares, it’s not even that good a business. He proposes a smart way to save both fishing industry jobs and our oceans. Photo: Bret Hartman / TED

To save our oceans, protect the high seas. How do we save marine life and improve the economics of industrial fishing? Enric Sala, marine ecologist and National Geographic Explorer-in- Residence, proposes the creation of a giant high seas reserve. For the past ten years, his team at the National Geographic Pristine Seas project has surveyed oceans and worked with governments to protect them. To accelerate sea protection, Sala believes we need to focus on the high seas. Falling outside of any single country’s jurisdiction, the high seas are the “wild west” of the ocean. Until recently, it was difficult to know who was fishing and how much on the high seas, but satellite technology and machine learning now enable the tracking of boats and revenue. As Sala says, he and his team found “the economics are dependent on huge government subsidies and, for some countries, on human rights violations. What this economic analysis reveals is that practically the entire high seas fishing proposition is misguided,” he continues. “What sane government would subsidize an industry anchored in exploitation and fundamentally destructive, and not so profitable anyway?” In response, Sala advocates for creating a high seas reserve that would include two-thirds of the ocean, protecting the ecological, economical and social benefits of our ocean. Sala concludes by asking: “One hundred years from now, if our grandchildren were to jump into a random spot in the ocean, what would they see? A barren landscape or an abundance of life? Our legacy to the future.” 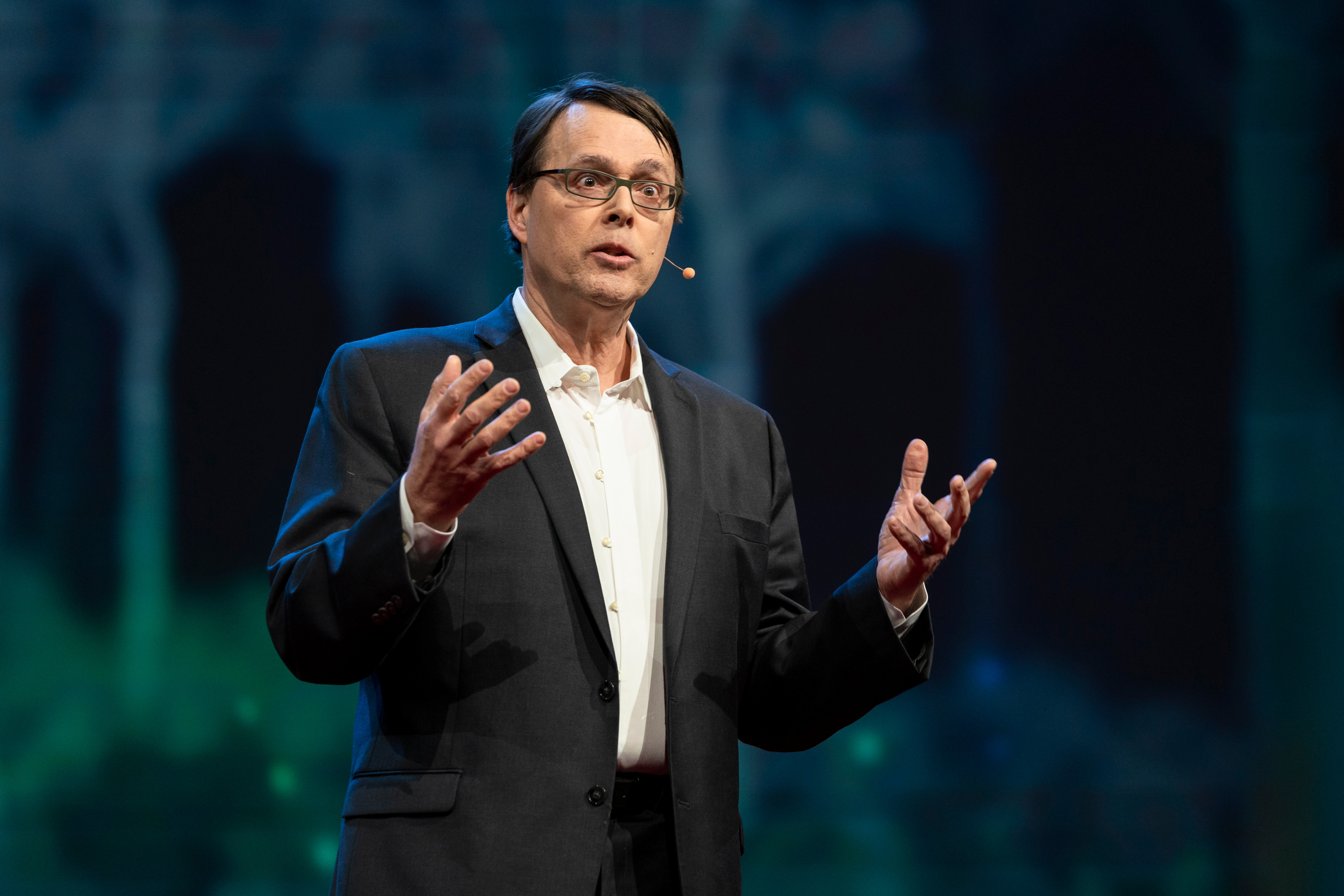 Are you a wizard or a prophet? In 2050, there will be almost ten billion people in the world. How are we going to feed everybody, provide water for everybody, get power to everybody — all while avoiding the worst impacts of climate change? Science journalist Charles C. Mann has spent years asking these questions to researchers, and he’s found that their answers fall into two broad categories: wizards and prophets. Wizards believe that science and technology, properly applied, will let us produce our way out of our dilemmas — think: hyper-efficient megacities and robots tending genetically modified crops. Prophets believe close to the opposite; they see the world as governed by fundamental ecological processes with limits that we transgress to our peril. They pray for a world of smaller, interconnected communities, populated by people who capture and endlessly recycle rainwater — and who need less of it because they don’t have lawns or water-guzzling washers. “If the history of the last two centuries was one of uncontrolled growth, the history of the coming century will be the choice we make a species between these two paths,” Mann says. But if our species is going to survive in the long-term, the first step is obvious, Mann says: wizards and prophets need to join together. “Working together, wizards and prophets have many paths to success,” Mann says. “And success would mean more than survival … it would say that we actually are special.”