In Case You Missed It: Highlights from TED2019

Twelve mainstage sessions, two rocking sessions of talks from TED Fellows, a special session of TED Unplugged, a live podcast recording and much more amounted to an unforgettable week at TED2019.

Looking at stars: Notes from Session 2 of TED2019 Fellows talks

The event: An afternoon session of talks and performances from TED Fellows, hosted by TED Fellows director Shoham Arad and TED Senior Fellow Jedidah Isler. When and where: Monday, April 15, 2019, 2pm, at the Vancouver Convention Centre in Vancouver, BC. The talks, in brief: Erika Hamden, an astrophysicist who builds telescopes at the University of Arizona. […]

A photograph by Paul Nicklen shows the tragedy of extinction, and more news from TED speakers

The past few weeks have brimmed over with TED-related news. Here, some highlights: This is what extinction looks like. Photographer Paul Nicklen shocked the world with footage of a starving polar bear that he and members of his conservation group SeaLegacy captured in the Canadian Arctic Archipelago. “It rips your heart out of your chest,” […]

Your weekend reading: The case against empathy, gorgeous photos from the NatGeo contest

If you can only digest six awesome pieces of Internet content this week (plus one congrats), look no further. Here’s a round-up of the best stories on the webs this week. TED speaker Paul Bloom makes a compelling case against empathy, arguing that empathy alone is not sufficient to uphold morality — and may even […] 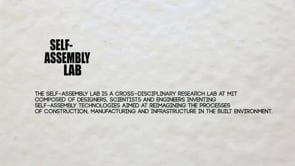 Fashion designer and BioCouture founder Suzanne Lee harnesses the labor of microorganisms to grow clothing. Computational architect Skylar Tibbits — who’s setting up a lab at MIT focused on self-assembly technologies and programmable materials — examines biological systems to develop his methods. We asked them to discuss the directions they’re exploring, and the trends and […]

The New York Times doubled-down today on articles about TED Fellows, running stories on Camille Seaman’s portraits of icebergs as well as on Skylar Tibbits’ toys that assemble themselves. The photography blog Lens turned its eye on Seaman’s work, marveling out how she captures the personalities of icebergs and glaciers in her stunning images. “They […]

[youtube=http://www.youtube.com/watch?v=3vjQ-jWPgNs] In this video, TED Fellow Skylar Tibbits shows how a self-assembly line might work, by bouncing together parts that “want” to fit together in useful ways. It’s a future of making things — at both macro and micro scales. Video by Karen Eng